Istanbul is an amazing city.  Jeremy and I spent a week here in 2009, loved it then, and loved it again in this 2015 trip. We also got another peek during a quick overnight layover in 2016.  It is a meeting point for both continents and cultures, East meets West. The food is amazing, the sights beautiful, and the vibe delightful.

That said, given all the flux in the general region, it is a city where there are sometimes safety concerns to consider. I would definitely keep an eye on government travel advisory sites regarding safety, but as long as things look reasonable on that front, it is a city that is well worth visiting.

We usually look at the travel warnings from both the US Department of State and from the British FCO (which are similar, but sometimes have different nuances). You should use your wisdom to stay safe, but really, it’s impossible to predict the future. The following year in 2016, we connected through the Istanbul airport just a few days before the airport attack there. Ironically, a week and a half later, we were in Switzerland – arguably one of the safest countries in the world – and saw an avalanche in an isolated place across the valley from where we were hiking. It’s important to be aware of risks, but not avoid them altogether as part of life.

We arrived late the night before on a short flight from Athens. After a crazy taxi ride to the hotel and a night’s sleep, we were ready to go sight-seeing!

Our first stop was the iconic Hagia Sophia – built in the days of Roman Emperor Constantine, it has been a church, a mosque, and now a museum. It was under renovation and had lots of interior scaffolding, so not as impressive as we remembered it being, but still pretty cool. 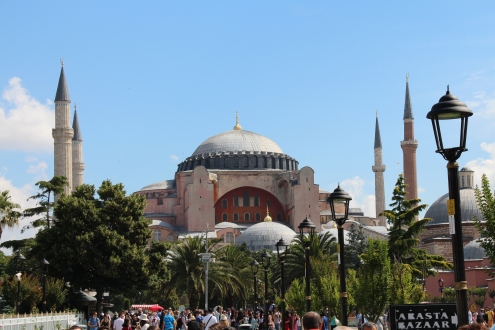 The 6th century mosaics were quite impressive, and a completely different style than most churches in Europe.

It was also interesting to see the changes that were made over time, with the elements added and change from over the past 1600+ years. 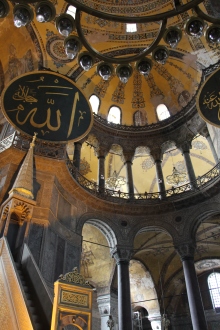 After that, our plan was to visit the Blue Mosque, right across the square from the Hagia Sophia. That said, the lines were really long, so we decided to take some pictures of the outside and come back another time. Our hotel in the Sultanahmet district was only a short walk away, so it would be easy to come back again.

One thing you will note is that I have a scarf around my neck in July.  No, it isn’t cold in Turkey, it’s quite the opposite.  But most of the mosques do require women to wear modest dress – no shorts or tank tops – and cover their head/hair, so it is best to have one handy.  Some places have loaner scarves and tunics, but I prefer to bring my own.  Sometimes I wear it and sometimes I stuff it in a purse. 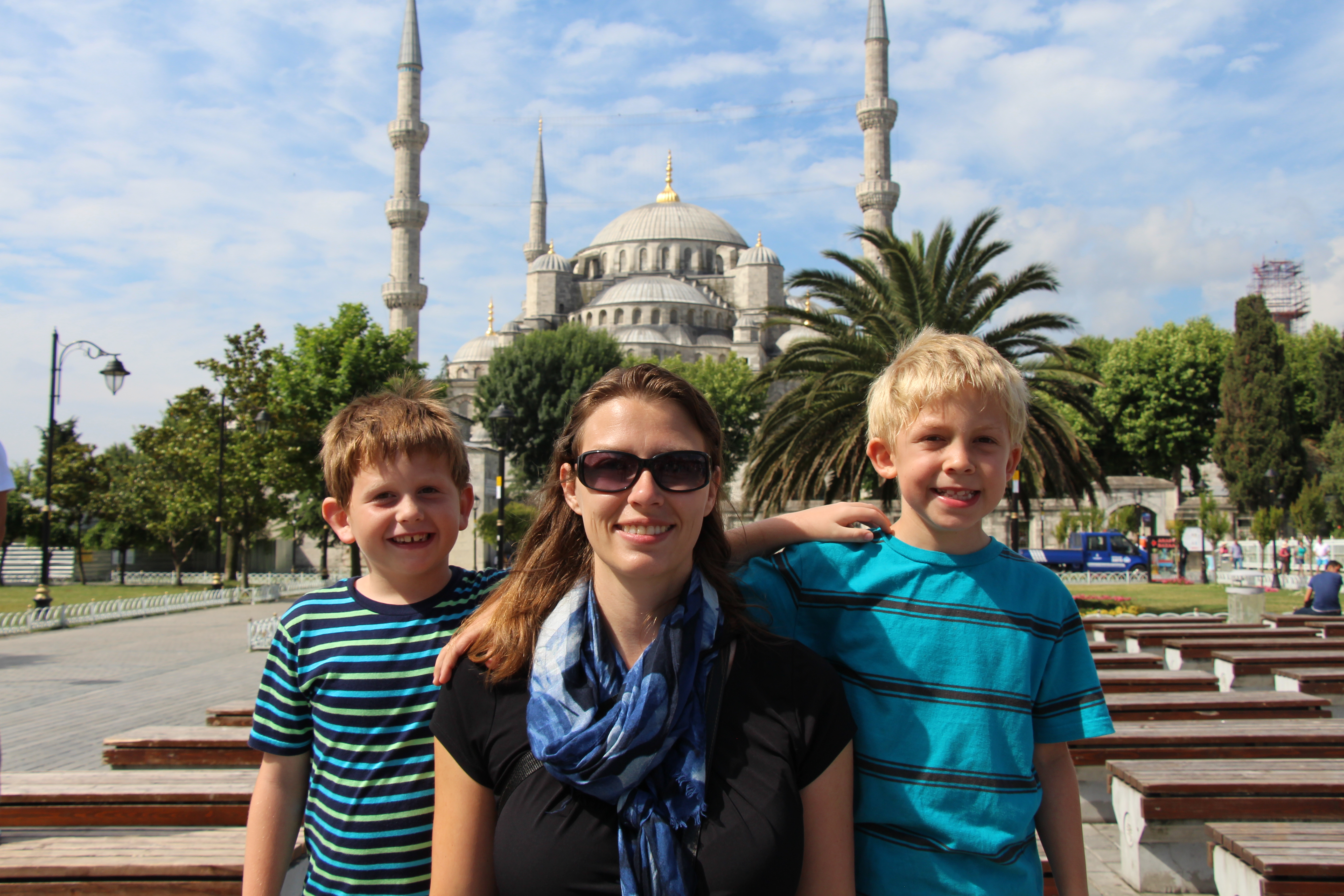 We then decided to visit the underground cisterns, which the boys loved!  It was a lot of fun to navigate the spooky underwater caverns with cool boardwalks while searching for the statue of Medusa. The underground coolness was especially nice on a warm summer day.

They were thrilled when they found the Medusa statue.

Next up was the Galata Bridge.  While there are nice views, the part I love most are the restaurants.  The bridge is filled with them and you can enjoy some delicious fish while soaking in beautiful views of the city. 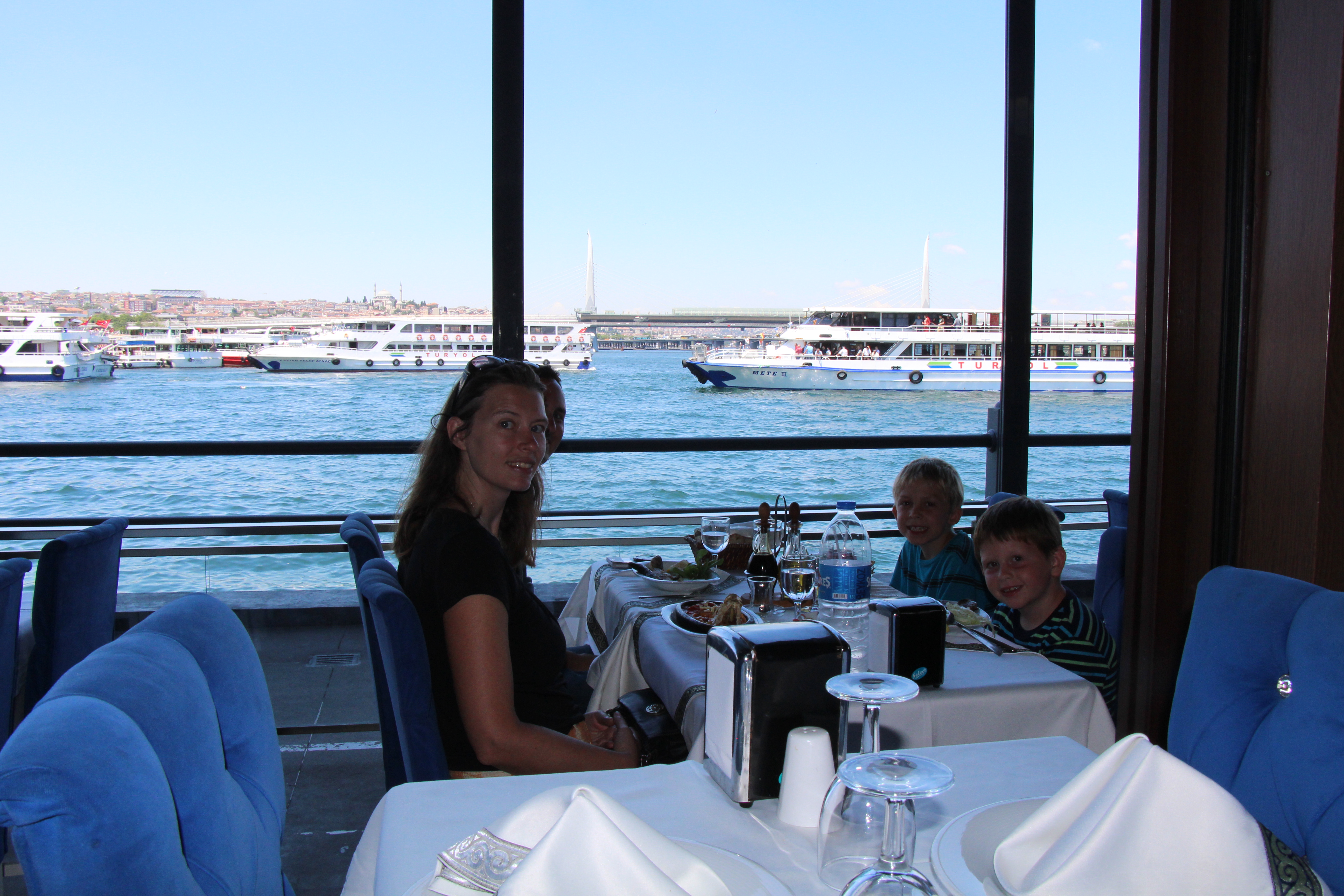 Since it was Ramadan (a month of religious fasting by Muslims), most of the locals did not eat during daylight hours and we had the restaurants mostly to ourselves.  If you are in a less touristy area during Ramadan, you may have trouble finding anything open.

The waiter really liked the boys and ended up bringing them some sort of dessert on the house.  It tasted a bit like a warm butterscotch pudding.  The boys were so enthusiastic about it that the waiter brought them a second helping!  All the people we met in Istanbul were very friendly and extremely pleasant to be around, and took a shining to our boys.  Still, I wonder what the waiters and chefs thought about being around all that food without being able to eat any of it.

After lunch, we spent some time enjoying the views. 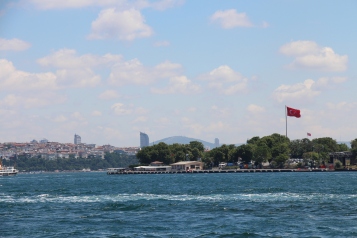 The other side of the bridge, on the way towards Taxim Square, felt somewhat more modern in comparison. The more middle-eastern vibe of the Sultanahmet side was replaced with a more cosmopolitan feel, though not entirely.

One site just across the bridge that people sometimes visit is the Galata Tower, though given the relatively steep price (and no discount for our kids), we decided to skip this time around and keep heading towards Taxim Square.

It was a nice walk, but the kids were exhausted, and we realized that it would be good to take a taxi back for a nap.  The first taxi we hopped in refused to use the meter, so we hopped back out and found a different one.  The new one had a fairly crazy driver and we sent some prayers up for safety.  Rather than worrying about all the terrorist activity that may or may not happen, your biggest danger is likely to be from a taxi accident.

After resting, we wandered around a bit, then found some amazing baklava and Turkish delight for dinner.  Baklava in Istanbul is awesome!  For whatever reason, I like it a lot better than the Greek variety and it has never disappointed.  I think it may be less syrupy.  They come in several varieties, but my favorite is the bright green pistachio version.

Other things to enjoy is both the standard Turkish tea that comes in tiny glass cups without a handle, and the more kid friendly version – apple tea.  All of us were happy whenever we had the opportunity to have some.

Turkish coffee is a different beast.  Think very strong espresso with the grounds mixed in.  Most often it also has a ton of sugar, but no milk or cream.  Some people love it, but I struggle with the grounds.  Either you swirl and drink the grounds with the coffee, or you let it settle and get a nasty mouthful of them at the end.  Neither sits well with me.

We sat by the water a bit, then headed back to the hotel.  Alas, only one more day of vacation.

At some point in the day, we made our way back to the Blue Mosque, but memory is failing me on exactly when that happened.

On our last full day of our vacation, we were all exhausted, but happy.  We slept in a bit then went to the nearby Topkapi Palace, where the sultans lived in the Ottoman era.

On visiting, I thought the jewels were pretty cool.  On the other hand, John loved the swords and other armor and weapons, and spent the rest of the morning comparing what he saw to the Prince Caspian Narnia movie.

There were some nice views of the city: 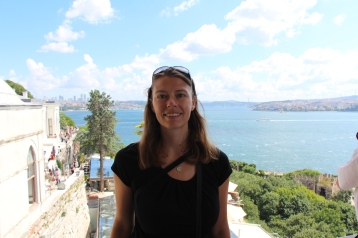 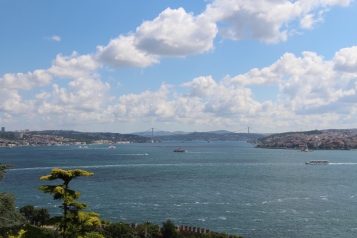 After spending time in the Topkapi Palace, we wandered out, and back towards the Istanbul Spice Market. In the market, where we bought some Turkish Delight, some apple tea for the boys, and some kabob seasoning for me.  After the fact, we realized that the prices were a bit inflated, but maybe just for us. 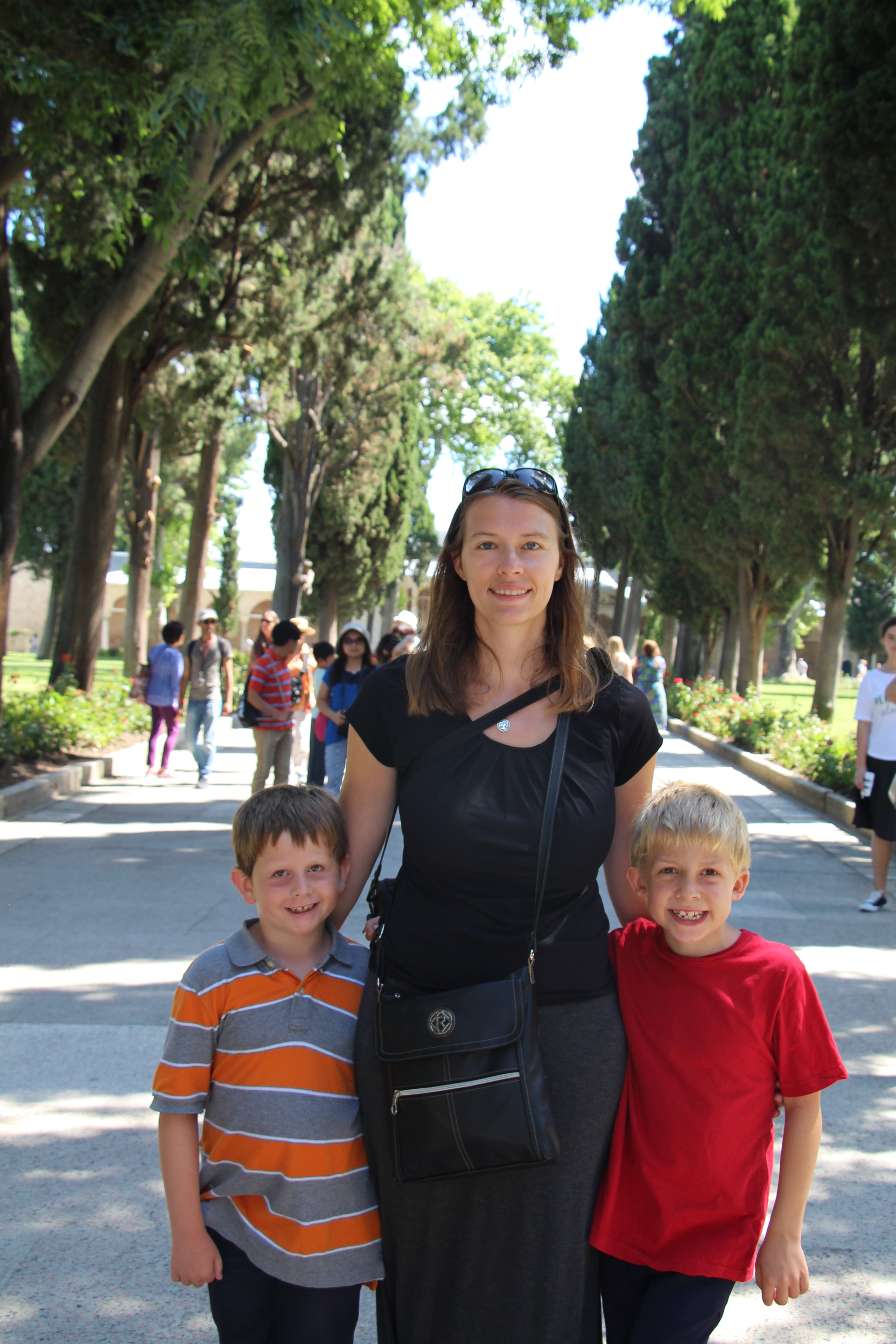 For lunch we found a neat place where some women were making pancakes by the entrance.  We ordered a kebab meat platter and it came with lots of flames.  The boys loved it!

At this point, we were ready to go to the Grand Bazaar.  In 2009 I had bought a leather jacket for a very reasonable price.  It has held up really well.  In 2013, some deer nibbled on in while in Nara, Japan, and at another point it developed a small tear, but the tear was fixable and I like to think that the teeth marks are an interesting souvenir.  Not bad for 10 years of use.  If you want a leather jacket, this is an excellent place to find one.

One thing that we wanted to buy this time around was a chess set.  John really enjoys chess, and we realized that this might be a good place to pick up a nice set. He ended up really liking the Crusader pieces.  We felt a bit weird about the Crusaders vs. Ottomans  set, but fortunately what he really wanted were red Crusaders vs. white Crusaders and the shop owner was happy to oblige him.  On our most recent trip to Italy, we spotted a very similar set in a shop.  John was in shock over the price, but was relieved that we only paid about a third of what the price tag indicated.

Having bought a bit more than we intended, we also picked up a duffle bag to toss some of the overflow into for our trip home.  The boys were disappointed that we didn’t get a new suitcase, but the duffle bag was more than adequate for one flight home.

For dinner, we found some nice döner kebabs, then found some more delicious baklava and Turkish delight.  A wonderful way to end our evening.

Our 4th of July morning started at 2:30am (Turkish time).  A cab ride to the airport was followed by a very long flight home with two layovers: one in Frankfurt and one in Seattle (yes, there are non-stop flights, but we found cheap tickets requiring two stops). We made it home just in time to see a few July 4th fireworks, but all of us were fast asleep by 9:00pm.

Here are some stats: