Our stay in Europe was unexpectedly extended by a day.  Our first flight from Berlin to Zürich was delayed for quite a bit, such that by the time we landed in Zürich, our second flight had already departed the gate. Given all the flights we’ve taken lately, including far riskier connections, it’s interesting that this was the one that was delayed – on a clear summer day, between Germany and Switzerland, no less.

When we landed, there was an email waiting on our phones telling us that they had auto-rebooked us for the next day. And as we waited in line at the transfer desk to get the boarding passes, we did double check other options, but given that it was already nearly 6pm and that the transatlantic flights had largely left for the day, there weren’t any better options.  On looking at Google flights, the only way we saw to get to the U.S. by the next morning would be to to take Royal Air Maroc to Casablanca, then transfer to get to New York by 1:30am and then find a third flight to Boston the next morning. While our aviation enthusiast son liked the idea of 3 hops, including a transfer in Morocco, hanging out in Zürich for an evening and taking a non-stop on Swiss was clearly an easier choice.

As far as places to get stranded, there are much worse places to be, particularly when the airline is footing the bills.  If it were a weather delay, Switzerland would have been more annoying due to high hotel and food costs, but with the airline booking the hotel and giving us food and transit vouchers, it was nice.  We did search while waiting in line what else we might get, and we learned about EC 261 compensation (600 Euros per person in this case, looks from a glance like we qualify). When we asked at the end about it, the clerk put us off somewhat.  We will look into this more when we get home – it seems like some airlines make it somewhat complicated to make a claim.  If nothing else, it appears that there are services that will go through the hoops to get it for you, taking a commission in the process.

We got to our hotel around 6:30pm, checked in, and used our vouchers to get dinner.  We started with a watermelon soup, which was quite tasty, and followed it with a beef noodle dish, which was also good.  James thoroughly enjoyed being able to watch airplanes take off all through dinner.

At this point, we used the public transit 24-hour day pass that the airline had given us to take the train downtown.  We spent a wonderful evening wandering the city and waterfront.  Zurich is a really beautiful city. 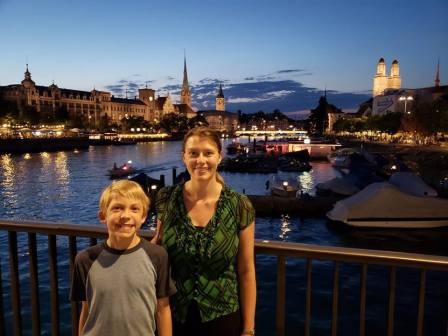 While in Kiev, we stumbled upon a “Toilet Museum,” where the boys learned that Switzerland has some public bathrooms on the sidewalk that are made of one way glass.  You can see out, but no one can see in.  We couldn’t remember if they were in Zürich or another city, but despite their valiant efforts to locate one, we never spotted one.

Other than buying some chocolate bars, we simply enjoyed the environment, using the opportunity to adjust a few hours closer to American east coast time.  The boys were thrilled to stay up past 11:00.

After sleeping in, our morning started with a tasty hotel breakfast, again with nice views (particularly to our son) of airplanes taking off.  We went back to our rooms (yes, we had to have 2 hotel rooms), and moved all of our stuff into one of them.  When we went back to the other, we discovered the maid had already made up the room and she got very upset when she saw me going into it – apparently, they didn’t bother to check whether we had checked out first.  Oh well, off to the airport again.