Glimpse of Iceland in January: Day 2

This post continues about my brief solo trip to Iceland in January.

The second full day there, I joined a day tour of the South Coast from Reykjavik. While I normally prefer the flexibility of self-driving, the risks of winter driving in Iceland convinced me to do organized tours for this trip.

In this particular case, the tour was much of the day – the van picked me up at 9am, I didn’t make it back until after 7pm, and it took a bit over 1.5 hours to get to the first stop.  I also noticed on the way home that the wind along the road was quite significant.

The first main stop was a waterfall called Seljalandsfoss. The driver asked us to meet back after a half hour – this was enough time to admire the waterfalls, take some pictures, and walk along the trail behind the falls. I felt like this fall was worth seeing, and we didn’t get too wet walking behind the falls.

There was a trail with some further sites around the bend, but due to time constraints, that part needed to wait for another visit.

The next stop was a much bigger, more powerful waterfall, one that you definitely couldn’t walk behind. I noticed afterwards when looking at my pictures that the camera lens was quite misty being even close to the falls. 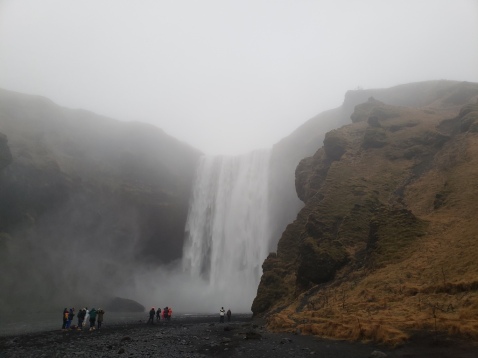 On the right side of the falls, there was a long set of stairs to climb to the top. From there, it was possible to walk along a trail along the river feeding the falls – quite impressive! 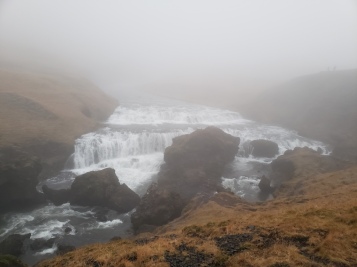 I admit that I was wondering at the time whether hiking on glaciers would have been better, but on the other hand, I’ve seen plenty of glaciers before on several continents, but really wanted to see what the Iceland coast looked like.

As we approached Reynisfjara Black Sand Beach. The driver advised us that the “black sand” bit is redundant, since in Iceland, with its volcanic composition, basically all beaches have black sand.

The rock formations were really interesting – a big, mossy hill near the water, and little “troll” formations just off the coast. Lots of people were out looking at it, and there was a small restaurant there where I had a sandwich.

A word of warning – this particular beach is notorious for its “sneaker waves.” Apparently, you might get small waves for a while, and then out of nowhere, a huge wave that will take you out to sea. Our driver advised us not to get any closer than 30 feet from the water, and there were warning signs all over. I suppose this one is not a swimming beach, but still something nice to look at.

The last main stop was a few minutes down the road from the beach, at a coastal village called Vik. I walked along the coast for a bit there, and afterwards, I climbed the hill that had a church on top of it. The hill was a nice vantage point to see the town and coast from, but that said, it was slightly foggy, given the winter weather.

After some time in Vik, it was getting dark, and the tour was winding down. We picked up the glacier climbing people and began the journey back to Reykjavik. Given the distance back, I can see why some people would do multi-day organized tours in this direction.

Regardless, I enjoyed the tour of this coastal area, and I can totally see why people drive around the whole island. In the evening, I ended up wandering around Reykjavik some more.