After spending 4 nights in New York City, our 2016 Spring Break trip continued to Washington, D.C., where we would spend another 4 nights.  Being mid-elementary school age, the kids were able to get a lot out of Washington, D.C., but I really want to bring them back again after they have had some middle or high school level American History.

In the morning, we took a train from Penn Station in New York City to Washington, D.C., getting lunch along the way.  It’s roughly a 3.5 hour ride. From Union Station in D.C., we hopped on the Metro and took another train towards Dupont Circle and checked into the Residence Inn on P Street (the “P Street” name was hilarious to grade school boys).  The hotel was fairly nice, larger than our Manhattan place, and had a view of the Washington Monument, if you looked hard enough.

A Walk from the White House to the Jefferson Memorial

After getting settled in, we decided to take a walk exploring DC. Our first stop was by the White House, about a 20 minute walk from the hotel.

Then we walked our way around the White House, to the south side.

We continued around the oval, admiring the beautiful cherry blossoms and stopped by the WWI Memorial in Pershing Park.

After walking by the WWI Memorial in Pershing Park, we eventually made it to the Washington Monument. 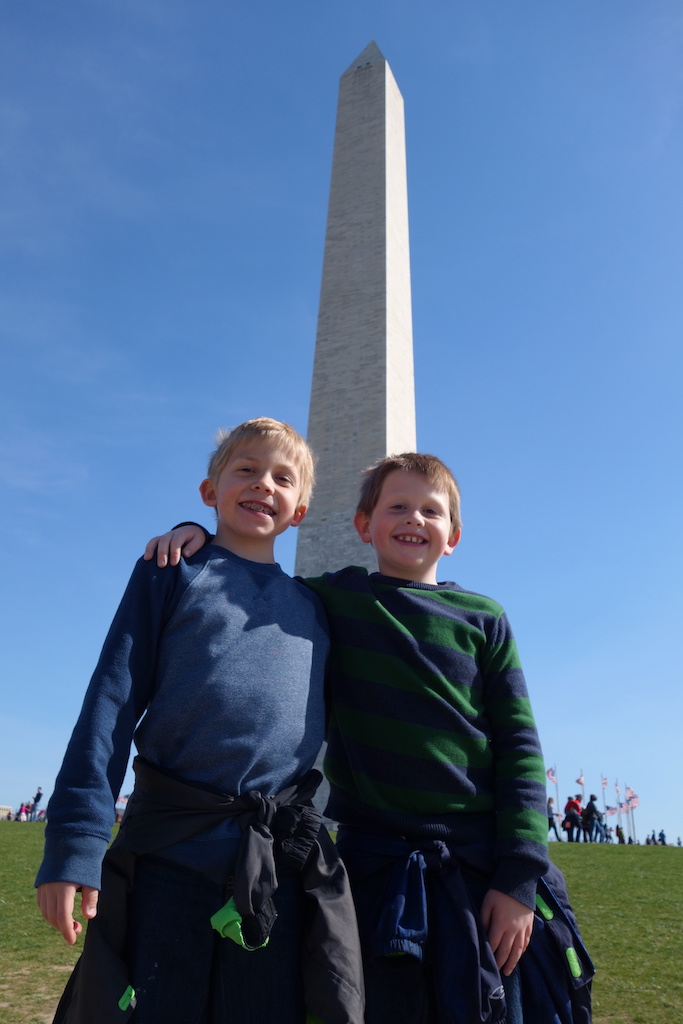 James loved that the airport is so close to the main sights.  It really is a bit weird that the planes can get so close to the White House and other major federal government buildings.  We decided to walk towards the Lincoln Memorial, admiring the reflecting pool on the way.

On the way, we stopped at the WWII memorial, then got some nice views of the Washington Monument from the Lincoln Memorial.

Next up was the Korean War Memorial, then we made our way to the Martin Luther King, Jr. Memorial.  Eventually we arrived at the Thomas Jefferson Memorial. 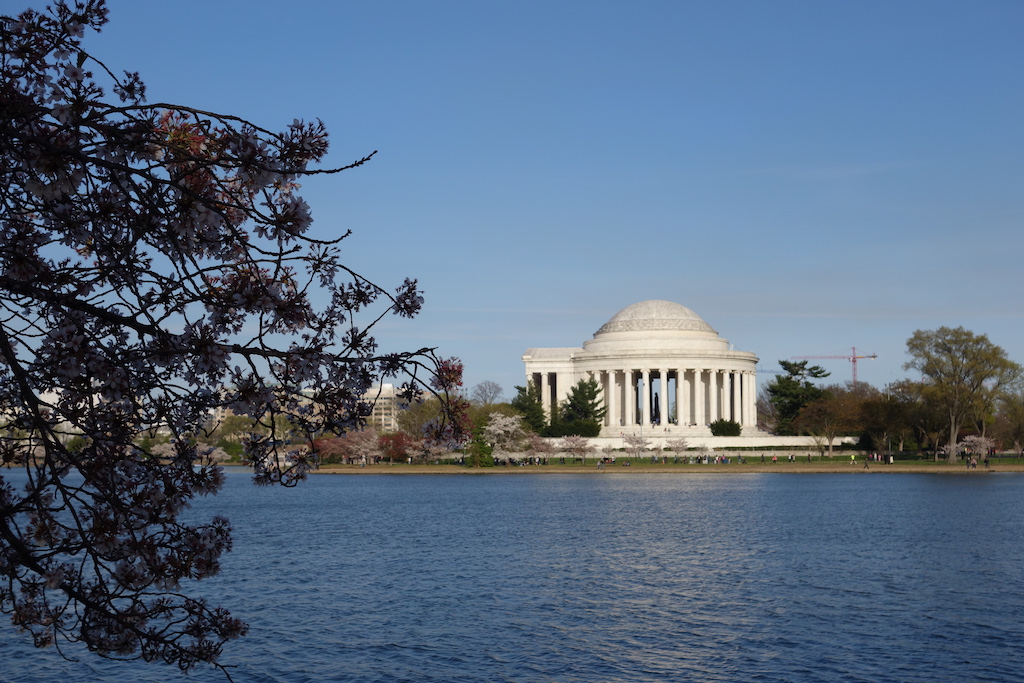 We were starting to remember how vast the distances are in D.C. – sites are further apart than they seem on the maps! At this point, we had already walked at least 4.3 miles.

As we continued along the Potomac River, we enjoyed more cherry blossoms.

Then a beautiful sunset. 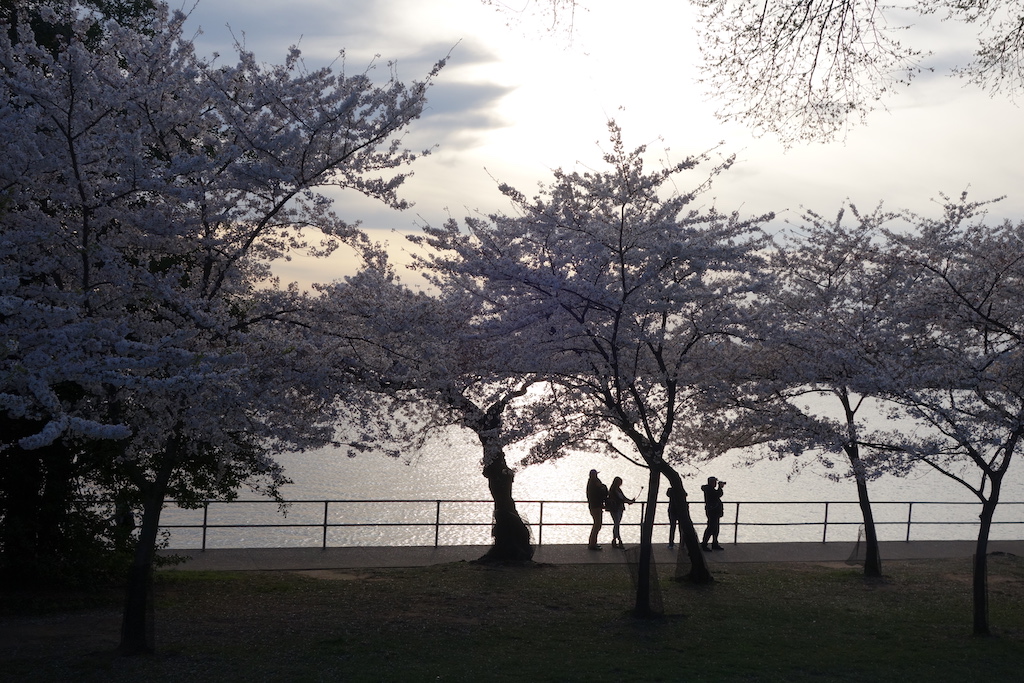 The boys were thoroughly exhausted, so we found the closest Metro stop and headed back to the hotel. We found a Panera Bread for dinner by the stop near our hotel. A long, but very enjoyable day!  Tired and sore, we retired for the evening.

Bureau of Printing and Engraving

Our next morning started a bit late, given the long previous day. We had hoped to get tickets for the Bureau of Printing and Engraving tour, but found that the free tickets were already gone for the day.

The Smithsonian Museums are all amazing, but our favorite (especially of the boys) is the Air and Space Museum.  Even better, the admission is free.  One of the best parts of visiting Washington, D.C., is that almost all of the major sights are top-of-the-line, and almost all of them are free. 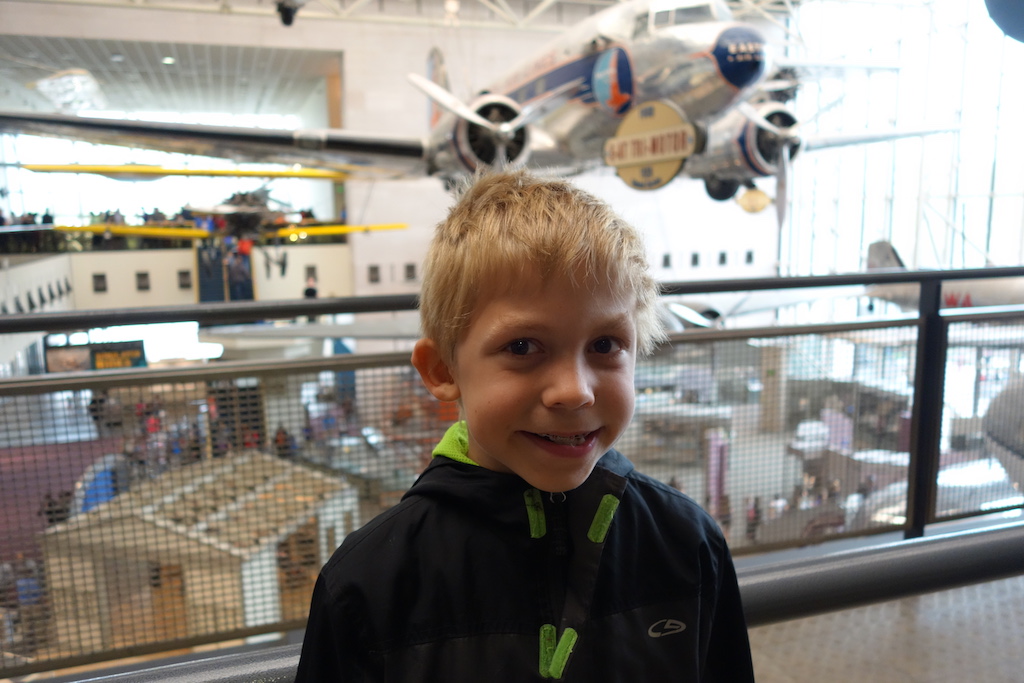 Given James’ obsession with airplanes, this was a perfect destination for him.  We ended up eating at the cafeteria and stayed until around 2pm.  James probably could have stayed longer, but we were ready to get some more sightseeing in.

After that, we walked around the National Mall, along to the Capitol Building and to the Supreme Court behind it. We then walked in the Penn District by Ford’s Theater. 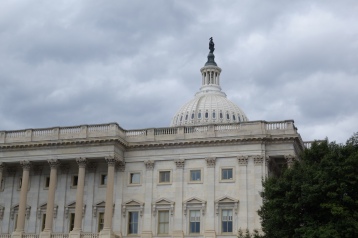 The boys really enjoyed some animal statues that they found.

By this point, it was late afternoon and the boys were thoroughly exhausted from the day. We went back to Dupont Circle, and took a walk of the embassies close to us on Massachusetts Avenue, observing the different flags and styles. James really likes learning about other countries, so this was a treat for him to see if he could find the most unexpected embassy.

We then went to a Chinese restaurant a few doors down from us.  Yum!

Our morning started with a visit to the National Gallery of Art.  I love art museums and this one didn’t disappoint.  That said, the boy can only tolerate so much of it, so we only spent an hour.

Tour of the Capitol Building

We had signed up with our Congressman’s office for a tour of the Capitol Building, and it was nearly time to check in with their office.  On the way, we picked up some seriously overpriced ice-cream; with a noon tour, the boys needed something in their stomachs. Signing up for with a Congressional tour is fairly easy to do in advance online. Even though this was arranged through the House side of things, we were also able to see the Senate Galley. 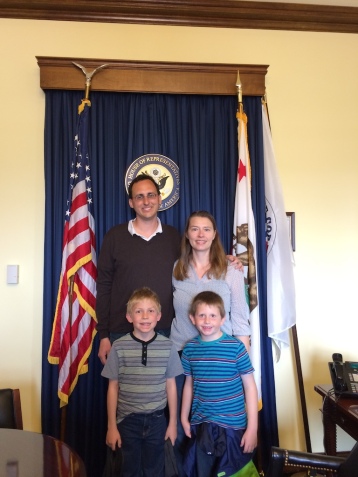 On arrival, we were able to sit in the office for a while, wait for the other tour members to arrive, and leave behind any belongings that weren’t permitted inside the Capitol Building.  Since Congress was in recess, our representative was back in California.  All the staff members were very friendly and seemed genuinely excited to be there, but of course, it was the junior-most staff member’s responsibility to give the tour.  Given that they had only been there for a couple of weeks, it ended up being a bit of a disappointment.  I’m sure that giving tours isn’t what most of the staff member envisioned when they signed up for the job.

That said, I did have unrealistically high expectations.  I visited DC in high school when living in Alaska, and our Member of Congress gave us a personal tour. Coming from a busy district in California, from where there are a lot more visitors, this isn’t going to happen.

The last part of the tour (the galleys), were on our own.  They gave us a brief description of what was inside, then were on their way.  By this time, the kids were famished, so we didn’t stay long.  Luckily, we found a McDonald’s fairly quickly and the kids were much happier.

Deciding what to do next, we gave the boys a few Smithsonian choices and they decided on the American Indian Museum.  While neither of them had had state history yet (generally the year that kids learn about American Indians), it gave them a good taste for things that they would learn and we all enjoyed our time there.

By this point, everyone was again quite exhausted and we went back to the hotel to rest.  For dinner, we ventured out for some take-away cheesesteak, but so made it an early evening.

Today we started our morning at the American History Museum.  The museum was both very interesting and quite unique.  Again, we all thoroughly enjoyed our time there.  Even so, we were quite exhausted by the end.

As it turns out, this was the day of the Cherry Blossom Kite Festival, so we were delighted by hundreds of families flying their kites by the Washington Monument.

At this point, we decided to head back to the hotel to rest.  Since we had some friends who were living in Virginia, we had made plans to go visit them for dinner, taking an Uber.  A delightful evening that everyone enjoyed!  We stayed way too late, but it was worth it.

Given our flight time, Sunday was mostly going to be a transit day, without time to do real activities.  But since the National Zoo was free and not far from our hotel, we decided to do a super quick tour.  We practically ran the whole way through, missed huge sections of it, but we still had fun.  Isn’t the panda cute?

Thoroughly exhausted, we made it to our plane and had a pleasant journey home.

There is quite a lot to see, and the distances along the National Mall are much further than they look on the map.  Pace yourself and tell yourself that you can always come back. We could have spent the whole week in D.C. as well.

We had hoped to visit the White House, but with my back issues, we weren’t sure if we would need to cancel and waited too long to make reservations.  Make sure you do this well in advance of your trip.

There are a ton of Smithsonian Museums, and they should be a highlight of your trip.  You will not be able to see them all in a few days, so pick a few that pique your interest.  The kids loved most of them, but the Air and Space Museum was their favorite.  The American Indian Museum was a good last minute addition that we almost skipped. The boys would have picked up more a few years later in school, but still learned from things.

The tour of the Capitol Building was interesting enough, and we also got to see the Senate Galley. The atmosphere probably would have been better (and less empty) in a non-recess week. The actual tour was so-so, since it was effectively given by the junior-most staff member, who had only been around few a few weeks.

We should have planned a little better to get tickets for Bureau of Printing and Engraving as well, but we found no shortage of other things to do.

Even so, Washington, D.C., was a great place to visit!  We loved it.  The boys loved it.  Definitely a recommended place to visit as a couple or with any school-aged kids, to help them understand the US’s history and government.

More from Adventures of the 4 JLs