We woke up to another amazing view at our farmstay in Dunedin!  After packing up and saying goodbye to our host, we got on the road for Te Anau.  The drive was, once again, beautiful.  Everything is very green and lush, the pastures amazing, the water super clear, the mountains spectacular.

It was a 3.5 hour drive, and when we arrived in Te Anau, we found an amazing pie shop a few doors away from the water and got some very tasty lamb and mint pies.  James got a Thai chicken pie that he was happy with, and John loved his sausage roll, although he claimed it should be called a hamburger roll instead.

Our glowworm tour was booked for 2:00, so we had about an hour to wander the town, scope out the food situation, find a playground with a zipline and a huge puddle, and get a change of clothes for John when he landed in the middle of the puddle.

The first part of the tour involved a 30 minute cruise through the lake, apparently the third biggest in New Zealand, to the glowworm caves. Parts of it reminded Jeremy of the Alaskan ferries through the Inside Passage.  Once I ignored the Te Anau side of the lake, ignored a little of the vegetation, and imagined the trees a little taller, I agreed with him.

When we arrived, they broke us into groups and had us cycle through different activities.  Our group started in the coffee/tea room where we enjoyed some refreshments while watching an educational movie about glowworms.  There are only a few places in the world that they can be found.  They do best in an environment with 95% humidity.  They spend their time making beaded mucus strands, one drop or bead at a time.  These strands hang from the ceiling and operate like a spider web.  The digestive juices from the glowworms make its bum glow.  The glow attracts flies and moths, which are then caught in the sticky, yet strong mucus strands.  The glowworm injects its prey with a poison that liquifies its insides, then it drinks the juices much like a spider would.  If the mucus strands are exposed to the sun, they dry up and do not work, so a cave is the ideal habitat for them, although you can find them on the undersides of fallen trees and other such places.

Next we cycled through the nature walk where we learned about some of the local flora and fauna, with a special emphasis on the takahe, which was once thought to be extinct, but was rediscovered in 1948.  It is interesting how many flightless birds New Zealand has.  I only ever thought about penguins being flightless, but there are tons of them!

At the end of our nature walk, we arrived at the cave entrance.  The opening was only about 1 to 1.5 meters high for about 20 meters, so it was interesting to get into the cave.  Once we were in, there were only a few places we needed to duck.  The cave is only about 12,000 years old, which is really young. Most of the stalactites are only a couple of inches long.  It takes them about 100 years to grow 1 cm, so it will be quite a while before they will be large enough to reach the floor.  There is a river that runs through the cave, so that prevents the formation of stalagmites.

First, we wandered in, saw some eels in the river, and saw our first mucus strands.  We were also able to see some of the carcasses of moths that had been sucked dry.  The tour continued on to a fairly impressive waterfall that we were able to almost touch.  Mucus strands were becoming more numerous and more interesting.  I was fascinated by how round the beads looked and how long they could get.  We continued back to a really dark spot where the river was flowing much more slowly and we could start to see the glow of the glowworms.

Next, we hopped on a boat and drifted into the pitch black darkness.  The boat bumped along and we got a really nice view of the glowworms.  When we got to the end of the cavern, the boat started spinning in order to turn around, but John thought that the driver was lost and trying to avoid the waterfall.  He was very relieved to be the first off the boat, and told us all about his overactive imaginings.

After the tour was complete, we wandered back to the entrance where it was quite funny to watch Jeremy folding himself over to get through the toddler sized tunnel.  We walked back to the cruise ship and enjoyed a pleasant ride back to Te Anau.

On arrival, we went to the grocery store to pick up some breakfast, then headed over to the Lakeside Motel and Apartments to check in.  The motel is just across the street from the lake and not too far from town.  Upon checkin, we were informed that we had been upgraded from a 1 bedroom apartment to a 3 bedroom, 2 bathroom house. Nice!

We discovered a full kitchen, so we went back to the store and picked up a mince meat pie and a pizza to bake in the oven, along with a few fruits and veggies to make our diet a little more balanced.  Fortunately the kids have done well with the milk here.  It is difficult to find fat free milk in foreign countries, so it usually takes the kids tastebuds to adjust.  Some countries, they never adjust.  In Spain, James couldn’t keep a single glass of milk down, so we gave up and let him eat ice cream cones instead.  Fine for a week, not fine for a month or more.

Jeremy wandered by the lake for a bit.  I stayed with the kids, watched the oven, and did a load of laundry.  Most of the small motels here have at least a coin operated washing machine on site for guests to use.  This one also had a dryer, so we took advantage of it.  One thing we have learned on this trip is that as long as you have washing machine access once per week, you really don’t need to pack any more clothes for a long trip than you would pack for a 2 week trip.  I think we could have left one of our bags at home and been perfectly fine.  I was a bit nervous since our destinations involve wool sweaters, hiking, hot beaches, rain, and about everything in between.  As it turns out, I don’t think it is a huge deal and we are unlikely to need everything we brought.

In the morning, we took a brief stroll around the lake, ate breakfast, and headed out for Milford Sound.  Even though we got quite wet, it was a lovely day.  You can view the full post about it here. 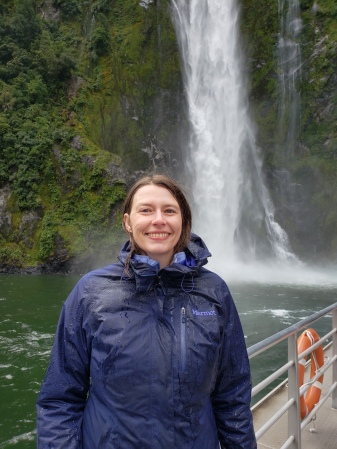 We had a slower morning and slept in a bit later than normal.  After breakfast we headed along the lake towards the bird sanctuary.  Twenty minutes later, we were looking at two takahes, rare birds that were thought extinct until rediscovered in 1948.

While wandering the grounds, the caretaker gave the boys some wheat to feed the ducks their breakfast.  The boys were thrilled to hand feed the birds.

After seeing a few more birds, including the kakariki, we headed back for town, stopped at the park, looked at a few gift shops, and headed back to the car to start for Queenstown.  On the way out of town, we saw some nice sheep, three of which decided to turn and pose for us. 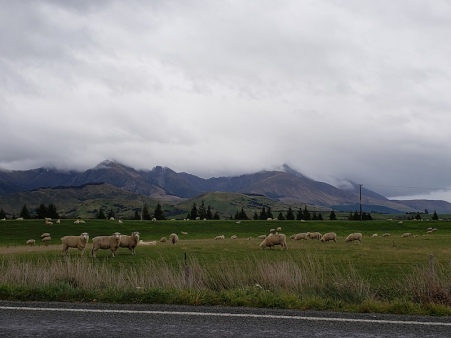