Today we took a day trip to Nara.  The Bamboo Forest in Kyoto is one place we have never been before, so our original plan was to go there.  However, the boys were a bit ambivalent and asked if we could go to Nara, the ancient capital of Japan, instead.  We were in Japan over Thanksgiving break 1.5 years ago and the boys decided that feeding the Nara deer was the best thing ever.  Since this is the last full day of our super long vacation, we decided that ending with happy boys was better than seeing something new.

After a late breakfast, we hopped on the Keihan line for Nara, made one train change to the Kintetsu line, and about an hour later we made it there from central Kyoto.  We felt happy that we didn’t have the JR Pass since the JR line is a little further out of the way, would have taken longer, and would have involved a lot more walking.  Our preference is to tire the boys out on sightseeing rather than on transportation to the sightseeing.

On arrival, we veered out of town and headed along the main path through the park.  Every block or so, there are vendors selling “deer crackers.”  The boys were thrilled to see the vendors, and even more thrilled to see the deer.  We held them off on feeding the deer until we were a few blocks away from town and away from the masses of people with the same idea.  There were two happy boys, one of them a bit nervous, and lots of happy deer.

The deer may have been a bit too impatient, and nibbled on my jacket when I wasn’t fast enough at opening the package of crackers and passing them to the boys.  Good thing I wasn’t wearing shorts, or there may have been blood.  When Jeremy and I were here in 2013, I was wearing a leather jacket and the deer left permanent teeth marks in it, so it wasn’t completely unexpected.  An interesting souvenir, but a good story if anyone asks what happened to my jacket.  You can avoid getting bitten if you show the deer your empty palms. 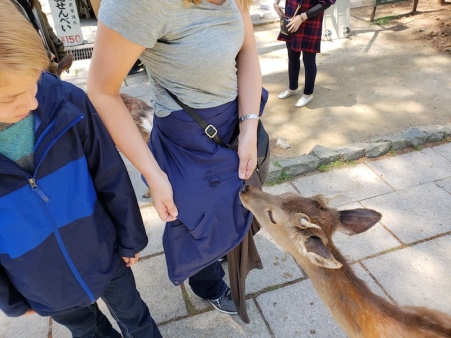 As we continued through the park, the boys kept asking for more crackers, although they also enjoyed just hanging out with the deer. 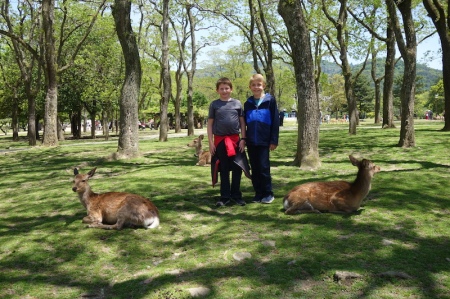 Unfortunately, they also got braver and braver and stopped handing out the crackers quite as fast.  One of the deer got quite mad and started making kicking motions at John, but luckily didn’t get him. 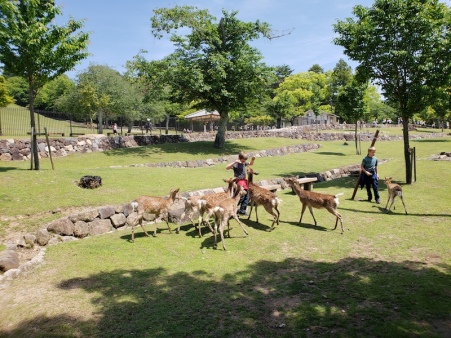 John was a bit traumatized, but then he decided it was because he had tasted a deer cracker and the deer could smell it on his breath.  Ummm, yeah, hopefully we don’t have stomach issues as a result (he said they tasted like rice).  By the end of the day, he was brave enough to feed them one more time and left feeling happy.

We continued on until we reached the Todaji Temple.  Since we went in last time we were here, we just admired it from the outside. 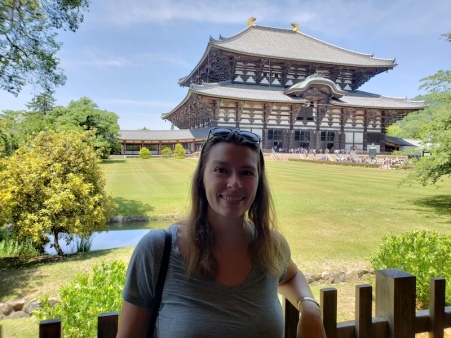 The walk between the Todaji Temple and the Wakamiya Jinja Shrine is beautiful, with lots of forest area.  The deer seem very content here and don’t pester the people as much.  There were a ton of school groups out and about, one of which had a brave boy that was being egged on by his friends.  When he was almost finished with his ice cream cone, he put the bottom of the cone between his teeth and had a deer take it.  Eww!  Deer kisses…

When we reached the Wakamiya Jinja Shrine, we found out it is 1,250 years old and decided to go in.

The boys had fun wandering through the archways. 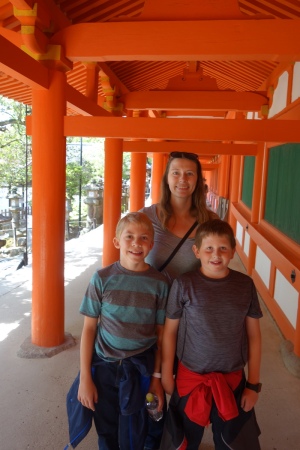 But Jeremy found it a bit difficult since the beams are not positioned for people of his height.  This picture doesn’t show it, but a few of the beams were at his chin level.  The particularly treacherous section involved going into a very dark room with very dim lanterns, and trying to avoid the eye level beams.

On the way back to town, we stopped at the Five-Story Pagoda, which had a surprising number of fire hydrants around it.  When we toured the Imperial Palace in the past, we learned that part of the problem with Japanese structures is that they are traditionally built with wood.  Every few hundred years, there tends to be a fire, then they rebuilt them.  It explains why a lot of the structures are a lot newer than the European counterparts built out of stone.

After we arrived in town, it was late afternoon and a lot of the restaurants were closed.  We did find a nice place that everyone was happy with and got some sushi. 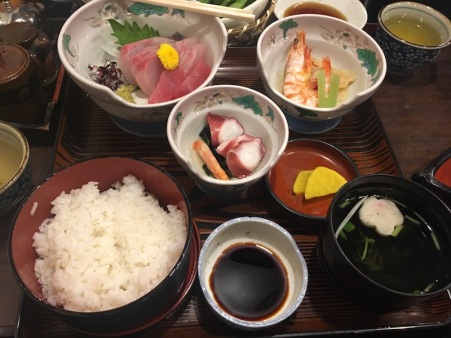 After wandering the town a bit more, we hopped on the train and returned to Kyoto. 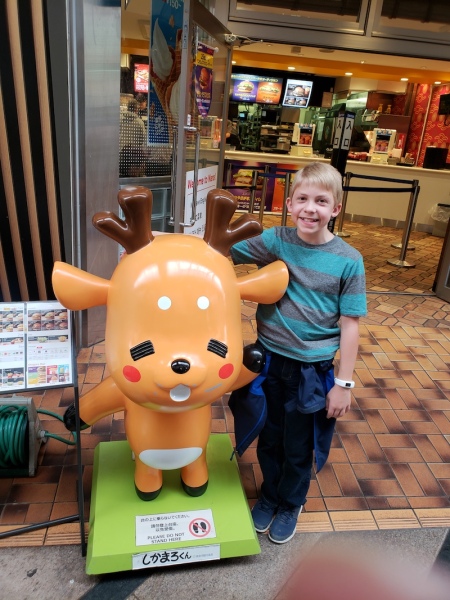 Unfortunately all the school groups were also heading back to Kyoto, so the train was quite crowded and we only got one seat.  It was a long hour, but the boys were still really happy that we went.