A Guide to Yehliu Geopark, Taiwan

One of our bigger travel surprises last year was seeing Yehliu Geopark while in Taiwan.  Having never heard of this park, somehow our family ended up 40 km outside of Taipei and were able to explore this amazing geological wonder! 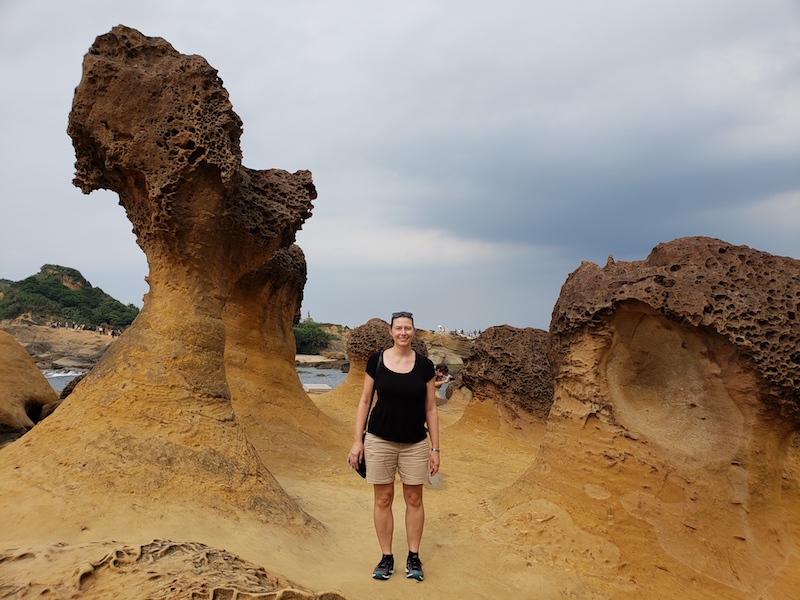 How We Ended Up At Yehliu

After spending several days in Taipei, we decided that we wanted to try to spend the afternoon seeing Yangmingshan National Park, after visiting the National Palace Museum.  We had some confusion with taxi drivers (in retrospect, we think the first driver was trying to match us up with another driver that spoke some English), but were eventually on our way.

The driver did take us through Yangmingshan park, and he pointed out various sites. But he also indicated that it wasn’t the best time of the year to go there, and that there was a place past Yangmingshan that we might find more interesting. Not sure if he was playing us for a bigger fare, we (uncharacteristically) decided to go with it.  Are we glad we did!

The first thing that caught our eyes were the “Mushroom Rocks.”

Step 1: Since Taiwan is on the Ring of Fire, pressure from Earth’s plate movement have introduced cracks in the rocks.

Step 2: Yehliu is also on the beach, so over the years, the ocean currents have worked their way into the cracks and eroded the stone, turning the cracked sections into something more like hemispheres.

Step 4: In addition, the composition of the rock is in layers where the top layer is a mix of calcium and other minerals that erode at different rates and produce the honeycomb textured “mushroom top.”  Since the bottom layer is mostly one material, the honeycomb is not present in that section of the rock. 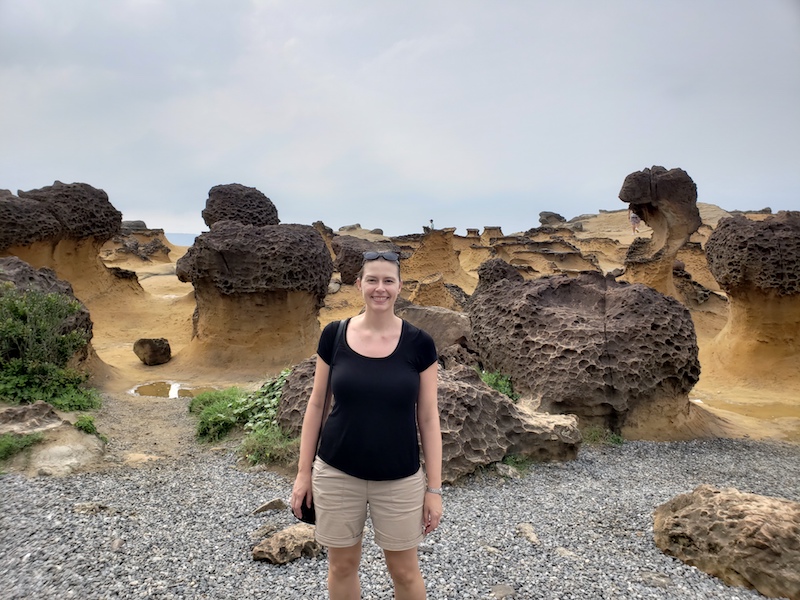 Of course, the human eye will try to pick out special features of these rocks and come up with an image that can be described in words.  We spent some time wandering, making sure to check out a few of the special rocks.

Other rocks you may want to check out include: Ginger Rock, Candle-Shaped Rock, Queen’s Head, Fairy’s Shoe, Marine Bird Rock, Ice Cream Rock, and tons more.  You can read more about these on Yehliu’s website, as well as the specifics about how the various rocks are formed.  For example, Ginger Rock and the Candle-Shaped Rock are not mushroom rocks, and therefore, were formed a little differently.

In general, expect to find that the most famous rocks will have tons of crowds, and that you will have little opportunity to get decent photographs.

After seeing the things we cared about, our strategy shifted towards avoiding the crowds of the major sights and enjoying the rest of the park.  We found the rest of our time to be quite peaceful.

The shoreline was also quite interesting. 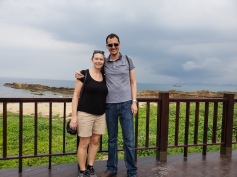 After some more wandering through the park, we debated taking the very inexpensive, but quite long bus back to the city, or to find another taxi.  We saw our old taxi driver, still waiting for a fare, so decided to just go back with him.  Giving him a little extra money for talking us into one of the highlights of that 5-week journey, and was money well spent.  The boys and I napped on the way back while Jeremy enjoyed watching the scenery.

Location: Yehliu Geopark is located in the Wanli District of New Taipei City, about a 40km drive from Taipei.

By bus: In 2018 fare was a couple of dollars per person and was supposed to take at least 75 minutes.  Yehliu’s website has specific information about getting there by bus.

By taxi: A taxi might not cost as much as you expect, particularly if you are splitting the cost between 4 people.  In 2018, one-way estimates ranged from US$30 to US$50, but this could easily change.