Most of us (there were 13 people total) started early, rolling out of Senlis around 8am. After getting a few km out of town, the road went into another forest area with groomed bike paths. I liked these sections – I imagine they’d make great weekend rides for locals. The route did go onto a few roads here and there, but given that it was early on Sunday morning, the roads were basically empty. 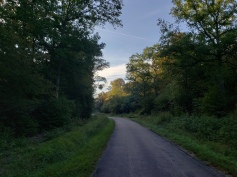 After that, the route went to the village of Ermenonville, which had a small castle (converted into a hotel) and a nice park. The shops were closed, so it was a quick pass-through. But it’s interesting how grand and manicured so many sites are here in France. 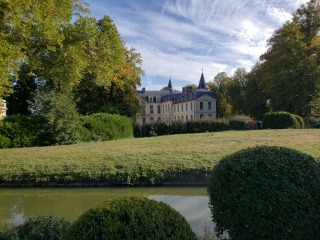 Going a bit further, the route went through another town – Dammartin-En-Goele, which had a large flea market in the center. The market area was full of locals. I bought a small pastry and took a break for a few minutes with some folks from the tour group.

Not long after that town, the landscape turned mostly to farm land. There were also many airplanes flying relatively low, on the approach to Paris CDG airport. The road had relatively light traffic, given the Sunday morning, and crossed a few more towns. I tried to photograph the planes, but it seems basically impossible with a camera phone lens.

About 25 km (15 miles) from the hotel, the route changed somewhat, from the routes between villages, to an urban bike path along a canal. It was a fairly attractive bike path, with pedestrians separated out on a different path most of the way. There were many locals riding along it – it seems like this would be a nice casual weekend ride for somebody living in Paris. 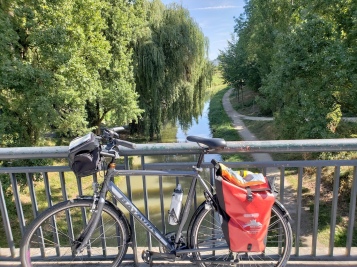 A little after noon, I was running low on energy, and still maybe 18km (11 miles) out from the hotel. But then I encountered the town of Villeparisis right off the bike path. There was a Sunday market going on in the center, as well as a proper bakery, where I bought a sandwich. I felt much better afterwards.

I kept biking along, feeling near the end. It got somewhat industrial maybe 10km (6mi) from the hotel, and then finally started getting very nice again a couple miles from the hotel. People were outside, hanging around the canals and the parks, it looked like a great Sunday afternoon.

I finally made it to the hotel between 1:30 and 2pm. Yay!! I felt really happy to make it. That said, the hotel clerk told me that my room wouldn’t be ready until 3pm.

So… there was an optional ride to the Eiffel Tower programmed into the GPS that I could take (the bikes didn’t need to be back until 7pm), though with a warning that biking in Paris is somewhat chaotic. The Eiffel Tower is essentially on the far west side of the city, while the hotel was on the north east side, making it a 26 km (16mi) round trip. I was starting to feel a second wind, so I decided to do it, since I’d be waiting for my hotel room anyway.

It was interesting biking through Paris – there were lots of people out, some streets were reserved for just bikes/pedestrians for Sunday, and even saw a big roller blading event going on. That said, it was very chaotic to bike through Paris – I imagine that locals figure things out ok, but may not be as ideal for out-of-town visitors.

Why? Paris does have bike lanes here and there. But in many places, the main provision for cyclists is that they’re allowed to use the bus lane. Oh, and so are taxis and motorcycles, and a few other kinds of vehicles. So if a big bus is behind you, you’re going to want to pedal fast, even if the road is kind of bumpy. And the bike lanes that do exist sometimes suddenly disappear or go to the other side of the road. It felt like I was suddenly warped to “expert mode” in a bike riding video game – interesting to try once, though I think the Metro is a calmer way to get around.

I did like biking by the main sites along the Seine – by Notre Dame, the Louvre, and finally the Eiffel Tower. It felt really good to make it to the Eiffel Tower, and even better when I made it back to the hotel. 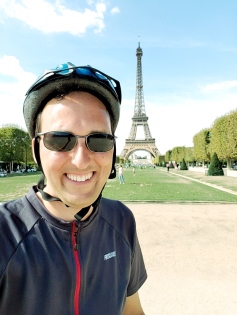 It was a little sad to turn in my rental bike at the end – it’s been such a big part of my life for the last 10 days. Though it will be nice to rest from cycling as well.

I’m really glad that I did this tour.  When I signed up last month, I had never done long bike rides on consecutive days, and started wondering if I’d make it. That said, it’s something that I talked about for a long time, something that was a lot of fun and beautiful along the way.