Today, the ride crossed into France! The day’s total distance was 73km (~46mi). My favorite parts were the forests at the Wildlife Park (“Parc Naturel Régional Scarpe-Escaut”) just over the French border, as well as getting pastries in different French villages that I criss-crossed.

The first 20km or so were in Belgium, with familiar peaceful farm roads next to the river. I’ve posted many river pics in the previous posts, though for variety, here are some cows along the path:

Then I crossed into France! While there was no big “France” sign, the region name was painted on the ground (picture on the left below is looking back into Belgium), and one of the houses right next to the border was flying a French flag. 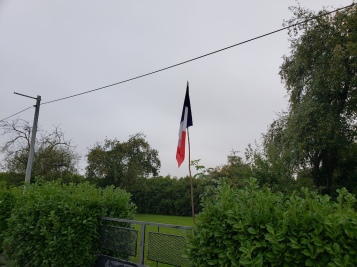 After a few farm roads, I biked a nice stretch through the west side of the “Wildlife Park.” I didn’t see any “wildlife,” but it was a nice, easy-going route through the woods. I saw some older folks fishing by one of the rivers, and I could imagine that it would be a pleasant place for locals to go on weekends. 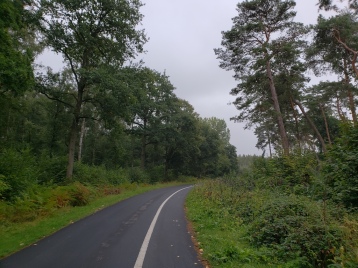 That said, fairly quickly after the park, the type of bike ride somewhat changed, as this is now France. In the Netherlands and Belgium, the route consisted of many bike-only paths/routes/separated lanes. Particularly in the Netherlands, the only time the bikes were on the same lanes as cars, the speed limit was 30 km/hr (19mph). I could be wrong, but this was my recollection. Belgium wasn’t quite that protected, but it was close.

In France, in comparison, things are more “normal.” Bike infrastructure is still very decent, but rather than separated bike paths, the model is more one of riding on secondary country roads from village to village. Often the villages are only a mile or two apart, maybe 5-10 minutes of riding. There isn’t a ton of traffic, but it is definitely different from the relatively coddled/care-free bike paths in the Netherlands/Belgium.

That said, it was still very nice – it kept alternating from farmland to various brick villages every few miles: 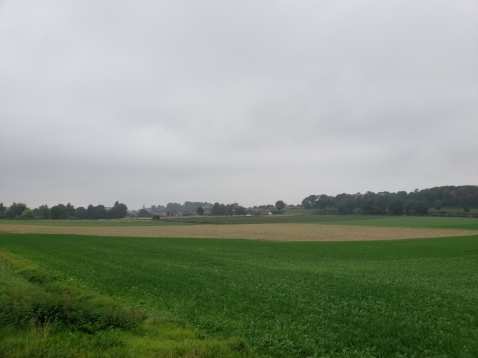 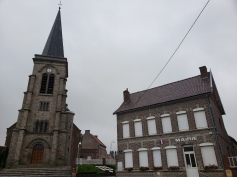 I noticed a bakery/pastry shop in one of the villages, and knew that I needed to stop. I ended up eating the almond pastry I got before I could get a picture, it was very good. So, I just had to stop in one of the following towns and buy another pastry to get a picture:

After a third pastry from another town’s shop, I wasn’t really hungry for lunch anymore.

To avoid an overly romantic vision of the French countryside – individually, the villages weren’t necessarily super impressive. Often, maybe just a church, a city hall, maybe a school/post office/bakery, and some houses. Not too many people on the streets mid-day, and some of the villages looked like they had seen better days. That said, it was still really neat to bike between them and to explore the area. I think I’d very much enjoy spending the summer pedaling from French village to village, and comparing the pastries from the various bakeries. Maybe sometime later =)

Finally, I arrived in Cambrai. I had started a little early at 8:15am because of the possibility of rain, but fortunately (except for lots of mist) stayed dry. Hence, I ended up arriving early at around 12:30pm. I had to wait a couple of minutes for my room to be ready, but was happy to get my shower. I had plenty of time to explore this small city, which had a nice cathedral as some other interesting medieval architecture.

Today was the shortest scheduled day of the trip, between Cambrai and Saint Quentin, at 50km (31mi). The route criss-crossed farm villages, and it went along the St. Quentin Canal. Much of the route went by verdant farms: 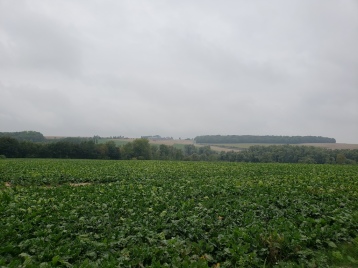 One interesting aspect was the many WWI signs and memorials along the way, since this area was near the front lines for much of that war. For instance, in Rumilly, signs explained that their village was poison gassed and destroyed during WWI. A large 12th century Abbey had signs explaining how it was used by the Germans in WWI, but burned/destroyed in retreat. There were signs for various war cemeteries as well. Each town along the way seemed to have its own war memorials for WWI and/or WWII. 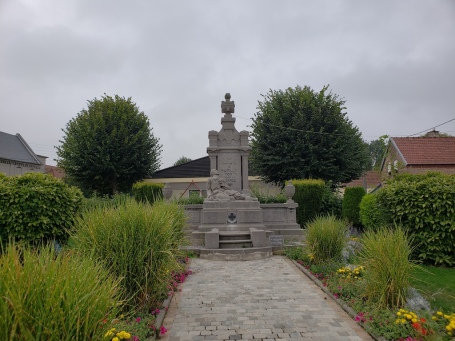 One noticeable difference being in France is the rolling hills on the farm roads. These gentle hills aren’t at all that big, but the bike that I rented isn’t that light either. I didn’t notice the bike’s weight so much in Holland/Belgium, but up the many short farm hills, it’s something I feel more.

The St Quentin canal was apparently commissioned by Napolean to move goods like coal in the north. The route crossed it a few times. Nowdays, there’s a bigger canal that has taken replaced it for much of the traffic.

I tried to find some more bakeries in the villages on the way, but the ones that I looked at were more of a bust (mostly just baguettes and some ok pain aux chocolat). Maybe I just just stopped at the wrong ones? That said, when I got to Saint Quentin, I found a couple of bakeries with very awesome almond-filled pastries (in lieu of lunch =)).

My destination was Saint Quentin (the name feels weird, given that there’s an infamous prison in California with essentially that name!), which was apparently founded in Roman times. Given the shorter bike route today, I had taken my time, and arrived around 12:30, which gave me plenty of time to explore this small city. It had a beautiful cathedral and grand town center to explore during the afternoon.