How do we book flights for these 8-hop trips? Do we have a magic travel agent? (No)

My favorite tool for getting a baseline of what is available and when is Google Flights. I’m slightly biased, since I used to work on that product (shout out to my former colleagues on that team!), several years ago when it was first launched.

What Google Flights excels at is brute speed – instead of waiting 5-10 seconds to get prices for a city pair and date, like on many sites, you might get the results in less than a second. This means that you can easily try alternate dates/weeks, alternate cities/airports, and get a sense of what is available.

One should be aware that Google Flights is not completely inclusive (e.g. no Southwest flights in the US, similar for a few non-US carriers), but it’s usually good enough to get a decent picture quickly. Once you’ve found the fare, you typically need to follow the link to link to book with the airline or a site like Expedia, which means that sometimes the prices you see aren’t always bookable.

Other tools that we sometimes use: 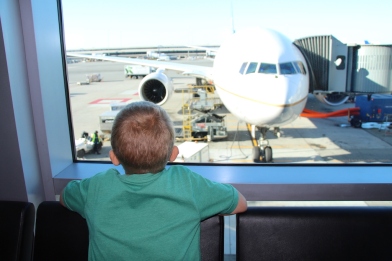 What kind of searches?

So, for an 8-hop trip do we just put all the cities into Google Flights? Not really.

The simplest type of trip search is a round trip to a fixed destination, e.g. 1 week in Maui. These are usually fairly intuitive to search for in an online booking engine. With a simple round-trip, main things you can optimize for are

Google Flights lets you quickly enumerate through these alternatives.

For a several week trip to Europe or Asia with several hops, our strategy is to book the trans-ocean flight as a standalone ticket, and then fill in any intermediate hops needed with separate cheap one-way fares. Sometimes, we’ll book the transoceanic ticket as round-trip, other times as open-jaw – in one city, out another.

That said, sometimes it can make sense to not use this strategy – for instance, our 8-flight trip from New Zealand to Japan this spring was effectively all single one-way tickets on different airlines, which allowed us to avoid doubling back. I used Google Flights to search for possibilities, kept a spreadsheet until everything seemed to be sensible, and then booked the hops one by one.

Employing lots of one way hops

Years ago, the best way to get around within Europe was with a rail pass. But these days, the proliferation of cheap one-way plane tickets can make flights a great way to get around. So, we’ve taken advantage of this, both in Europe, and also in Asia. But we still book some trains as well, which can be sensible.

As you see $30 one-way flights around Europe, be aware of the caveats – some of the cheaper flights might not  be scheduled necessarily every day, and might not be at the most convenient airports or times. Research the baggage fees, and be aware that carry-on size and weight limits are often strictly enforced.

When booking a trip with many one-way hops, it sometimes takes some trial and error to figure out what city pairs to piece together to get a good overall route. When doing this, I often have a spreadsheet, figure out prices/times of various non-stops, and often a sensible set of hops emerges.

Because of oddities of the airlines, sometimes you might do better either combining or splitting tickets. Discovering this can just be trial and error with Google Flight search.

Warning: don’t book too many flights on a given itinerary. Going through airports can be time-consuming, especially when compared with city center train stations. Your one-hour flight might take half the day door-to-door, and you might find yourself spending too much of your vacation in airports. 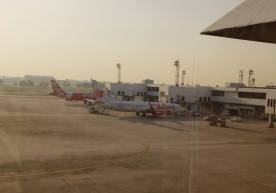 One important rule – for most tickets booked from a US website, you are able to cancel free of charge within 24 hours. This isn’t universally true, and doesn’t necessary affect super-close in tickets (e.g. same day), so read the rules first.

So, if you see an awesome fare, are 90% sure that you want it, but need to talk with your significant other first – you might want to just buy the tickets, and then use the free cancel rule to back out if needed (just make sure that the rule applies). Though if the fare is an obvious mistake fare (e.g. $100 transatlantic business class), the USDOT allows the airline to cancel the fare.

Same thing if you’ve booked a ticket, consider checking again the next day to see if the fare dropped drastically, and consider rebooking in that case.

How far in advance?

We don’t know. We used to book our summer trip 6+ months in advance, and keep an eye as ticket prices change. This year, we’ve booked a lot of travel relatively last minute. That said, many flights get expensive when booked less than 2 weeks in advance, since they want to charge business travelers more.

We used to be big points/miles fans, and there are good websites and blogs out there dedicated to points (e.g. ThePointsGuy) – definitely look into specialty sites like that. In 2011 and 2013, we got many free tickets to Europe using our miles, which helped quite a bit budget-wise. That said, the landscape has shifted somewhat since then, and we don’t rely on points for our strategy nearly as much anymore. I think the main reasons are:

What about bundling with flights and hotels/cars?

We don’t usually do this, but with some leisure destinations, where the pricing of hotels is a little soft, you might save by booking flights together with the hotels. Some search engines like Expedia let you book these deals.

As far as I’m aware, the flights component of a package is effectively never discounted; online travel agents don’t make much money from flights. Hotels, however, have relatively high booking commissions and are far more flexible with their pricing. Hotels that might ordinarily not want to advertise a discounted price, to avoid eroding their pricing power, might be willing to discount their rooms when part of a “package,” since the price is obscured when combining with other factors.

Typically, this approach seems to work best with leisure destinations like Hawaii or Mexico, when you don’t go during the peak season.