Our last day in Israel started with a drive from our apartment in Tiberias to the ancient port city of Acre. Acre has a fascinating history that starts over 4,000 years ago with the Phoenicians and passed to the Romans, then the Byzantines, then the Crusaders. During the Crusades era, it was their main port to get to Jerusalem.  The city fell in the 1200’s, then was rebuilt by the Ottoman Empire in the 1700’s.

One of the most interesting sites is the Knight’s Hall, which gives you access to the Crusaders’ Fortress.  The boys’ favorite part was the Crusader Latrines, which had rows of stone toilets lined up over a big pit. Their second favorite part was the Crusader era games inside the Knight’s Hall. First they had to get a ball up a peg board without letting it fall into the board. Next, they had a ring toss. Luckily, there wasn’t any archery or spear throwing, although I’m sure the boys would have loved it if there were. 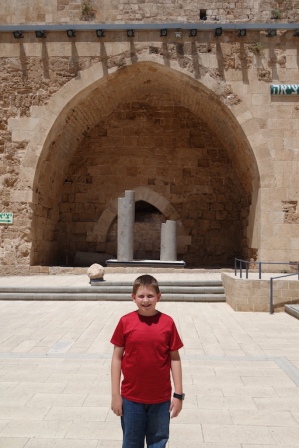 After visiting the Crusaders’ Fortress, we continued through the market. Jeremy’s favorite was the za’atar pizza, which was basically a pizza crust with lots of olive oil saturated za’atar, an Israeli spice with a very unusual flavor. We also got some fairly delicious baklava. We also picked out a jelly donut looking thing that turned out to be a slightly gross bread roll stuffed with jam and coated with powdered sugar.

Next up was Templar’s Tunnel, which was a long, underground passageway that led from the old Palace to the port.  The kids loved that they could touch the ceiling and decided that Jeremy’s height is not always an advantage.

We then walked down to the water, where the kids were delighted with the offerings of hot dogs, popcorn, and tons of other foods that American children love. We ordered a hot dog for John, which turned out to be three hot dogs placed in a very long baguette. Luckily, we didn’t order two and James ended up wanting a third of it. I was feeling a bit off from the heat, even though I was drinking a lot of water. The heat has been really sapping me, but a nice Fanta seemed to bring me back. Maybe I just needed some sugar. 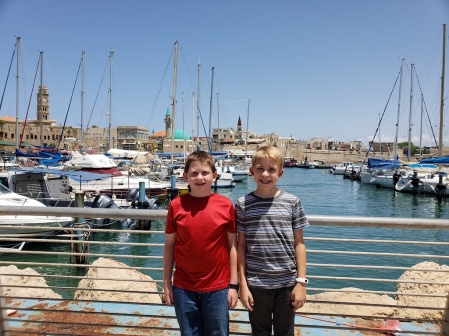 If we would have had more time, this was definitely a city that I would have spent more time in. But we were out of time since we had told the boys that they could go to the beach for a few hours later in the afternoon. We got back into the car and drove to Tel Aviv, passing through Haifa without stopping, and completely skipping Caesarea. On arrival, we parked our car in a garage and walked to our apartment. Our room wasn’t ready, so they upgraded us from a studio to a 1 bedroom apartment. It was quite nice and felt like we were staying in someone’s home. The kids put their swimsuits on and we walked to a very nice beach. The boys had tons of fun splashing around in the very warm water. A good end to our time in Israel.

After everyone had cleaned up, we walked across the street to the grocery store, picked up some dinner and breakfast, and had an early night of it. The boys actually asked to go to bed a full hour early; we were all fairly exhausted.

We had a quick breakfast in our apartment then headed out for the airport. The drive was fairly uneventful.

Security at the Tel Aviv airport takes a while. First there is a car checkpoint, on the road before we could go on the airport property. Then we were able to return the car. Next, we had to do our exit interview. Unfortunately our very sturdy Turkish Airlines baggage tags got us a lot of questions. How many times have we visited? Why did we go? Do we have friends there? Where did we stay? Which cities did we visit? How long were we in each city? After we finally made it through the interview, they stamped our “Border Control Stay Permit” card. Since several middle east counties will not allow entry if you have an Israeli stamp in your passport, they now stamp a card that they place in your passport. When you leave, they stamp that same card in lieu of stamping your passport. Much easier than getting a new passport!

We made it to the checkin line, which was surprisingly quick, then we had to go through regular airport security, which was much longer. Then there was another passport control line where they gave us a “Border Control Exit Permit” card. Finally, we were through security.

I saw a bookstore with English language Israeli cookbooks and bought an interesting looking one that also had a bunch of text about Israeli holidays. I am looking forward to reading it! We used the last of our change to get some coffee and pastries, then we boarded our plane and are on our way to Italy!