Our last day in China was horrifyingly smoggy. We were spoiled on our first few days when the city was under strict pollution controls for a major conference, but this last day gave us a much better picture of what the local people may often have to deal with.

As we got on the subway, Jeremy and I started to talk about how bad the pollution was. Earlier in the week, the air had been unusually clear because of a special conference, and didn’t quite understand how atypical the blue skies were. We had  packed some N95 masks for the pollution, but since we’d gotten used to nicer air earlier in the week, we left the masks in our suitcases.

The air this day was so much worse than previous days – the AQI rating was roughly 350 – that we were thinking about turning around and getting the masks.  But, since it was our last day, we were already on the train, and most of our activities would be indoors, we decided to suck it up and brave the air. By the end of the day, we knew it was a mistake, but at least it was only one day.

Our first stop was the National Museum, which is much vaster than we were expecting. We started in the Ancient Chinese exhibit in the basement. The idea of Chinese cavemen was something that Jeremy and I had never really thought about.

Jeremy has always wanted to see the Terracotta Warriors, and was delighted that they had a few. Xi’an is definitely on our list of places to go. But, Jeremy was a bit surprised and sad that the kids didn’t share his appreciation for them. Usually John really likes the warrior exhibits. 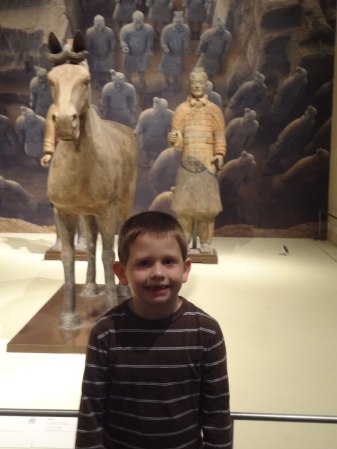 There were also some nice exhibits on Maoist paintings, ancient Chinese money, and the silk road. We could have spent much longer here, but the kids were getting bored, and there were other places we wanted to visit. It’s definitely a museum worth visiting, though.

Next up was the Police Museum. We knew it would be up John’s alley, but we had no idea just how much he would like it. Really, it was quite well done and impressive. The weapons display was incredible and we spent a lot longer here than we thought we would. Too bad we couldn’t take pictures.

From here, we hopped in a cab and went back to Wangfujing Street and admired the scorpions-on-a-stick again. James still couldn’t bring himself to try them, but you could see the longing in his eyes to do it. Unfortunately, my horror was as great as his and I couldn’t bring myself to try it first and encourage him. Here is a picture from a few days before:

But we did pop into a food court and get some noodles. Yum! Much better than the scorpion would have been.

Sad that our time was coming to a close, we caught a cab to the subway station and made our way back to our apartment. Our Airbnb hosts had been delightful, so we spent a little while saying goodbye, then caught a taxi to the airport for our early evening flight.

What a wonderful vacation! If you do get a chance to take your kids there, it is a great place to broaden their perspectives, and to have a lot of fun in the process!