We arrived in Beijing relatively late on a Sunday night, having started the trip from California on Saturday morning. Our AirBnB host offered to arrange an airport pickup for us for a similar price to an airport taxi, and it was quite a good option to avoid navigating dark alleys at night. It is lovely to have someone holding a sign with your name on it as you exit the airport. Such a sense of security.

Arrival at our apartment was delightful. Our apartment hosts were very friendly and gave us a lot of tips about the area – in addition to the packet of information that they sent us in advance with nearby recommended restaurants and such. The kids were thrilled with both the bunk beds and some panda bracelets that our hosts gave them.

We set up the room a bit, including a hand towel over the sink to remind us not to drink the tap water (bottled water only for our fragile western stomachs).

After getting settled, our internal body clocks were way off, and we were a bit hungrier than we should have been. Deciding to follow our host’s suggestions, we decided to check out a dumpling house a block away. Yum! For just a few dollars, we were able to get 2 delicious plates of dumplings. What a great intro to Beijing! Afterwards, we went straight to bed.

After a difficult night of trying to sleep when we weren’t tired (the kids wanted to get up at 1am due to the time change), we were ready to explore the sights. We still left our apartment quite early. 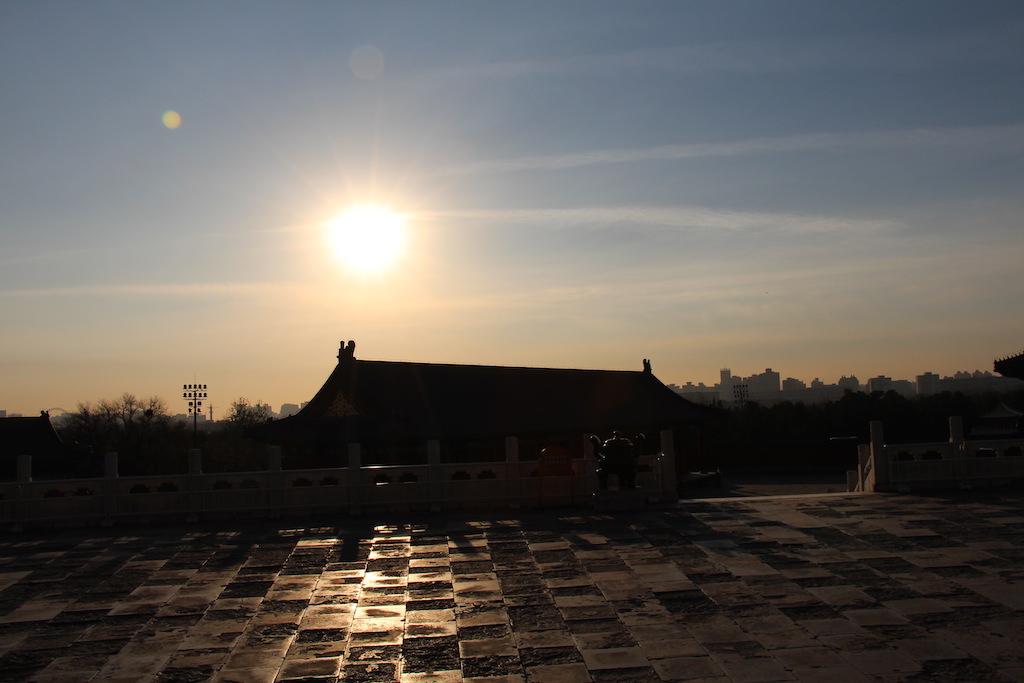 As we made our way to the metro to go to the Temple of Heaven, we decided to stop for breakfast. The boys thought it was weird that we were having dumplings for breakfast, but John ended up being thrilled with the Chinese fried bread we got to go with them.  Whenever he saw that as a breakfast option, he would get very excited.

The Temple of Heaven is a set of buildings that were once used for religious purposes exclusively by the emperors.  It was not opened until the public until the 1900’s (there is conflicting data on the year), and became a UNESCO World Heritage site in 1998. 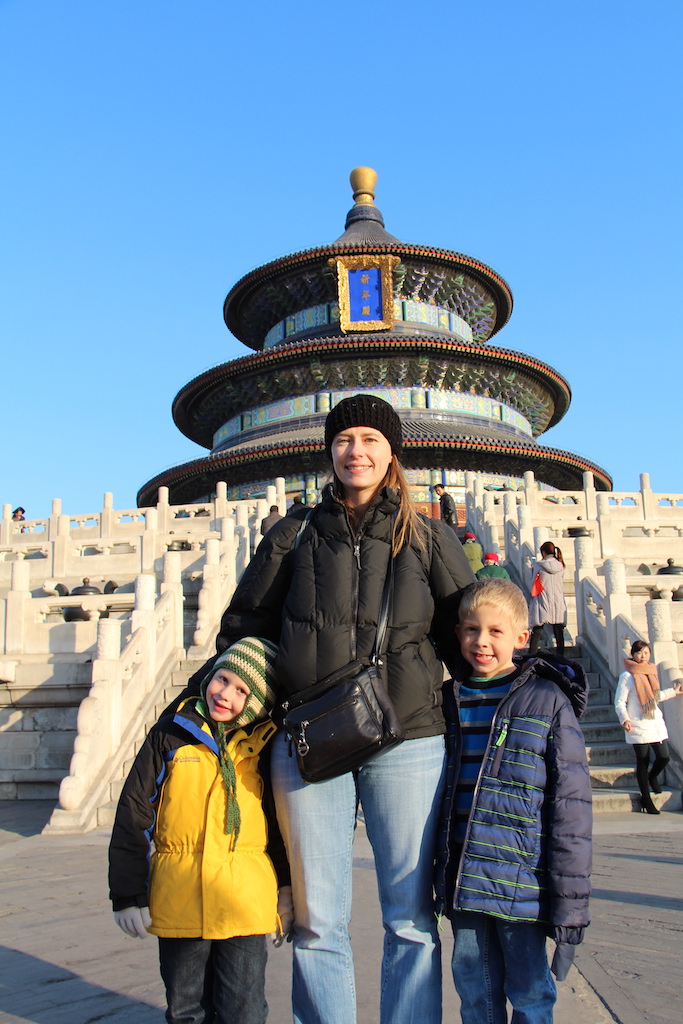 The most prominent is the Hall of Prayer for Good Harvests and was traditionally visited by the emperor. Being made entirely of wood (and interestingly without nails), fire is always a significant danger and a lightning bolt managed to destroy the building in 1889.  What you see today is a rebuild. 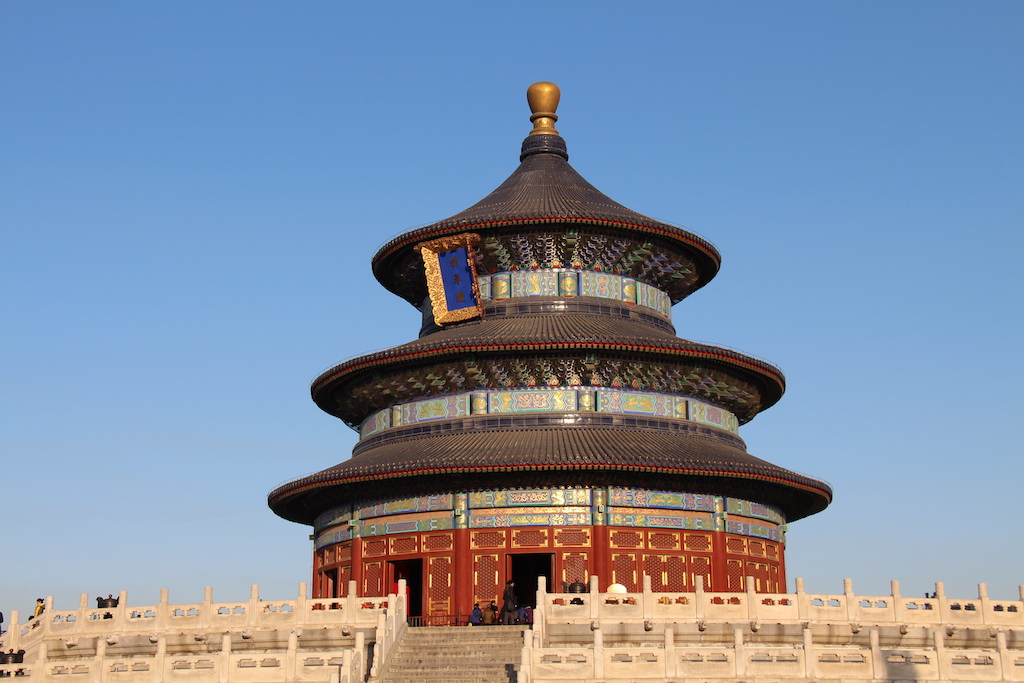 One thing you will notice in the pictures is how clear blue the sky is. This is actually somewhat unusual in Beijing. We were fortunate in that there was a major conference going on and the city enforced strict pollution controls to give visitors a better impression of the city. Even though this was an inconvenience to the locals, we really appreciated the results. 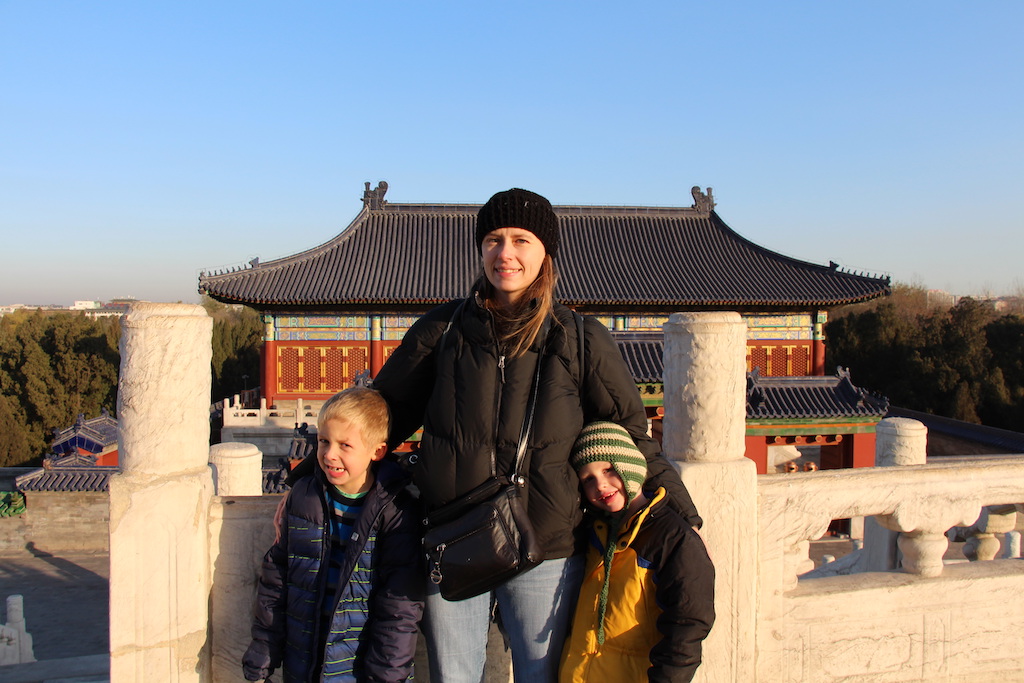 We wandered a bit and were able to give the boys an introduction to how different people worship around the world.  Seeing it is much different than reading about it, and I think they learned more in the short time we were there than they ever had at home or at school. 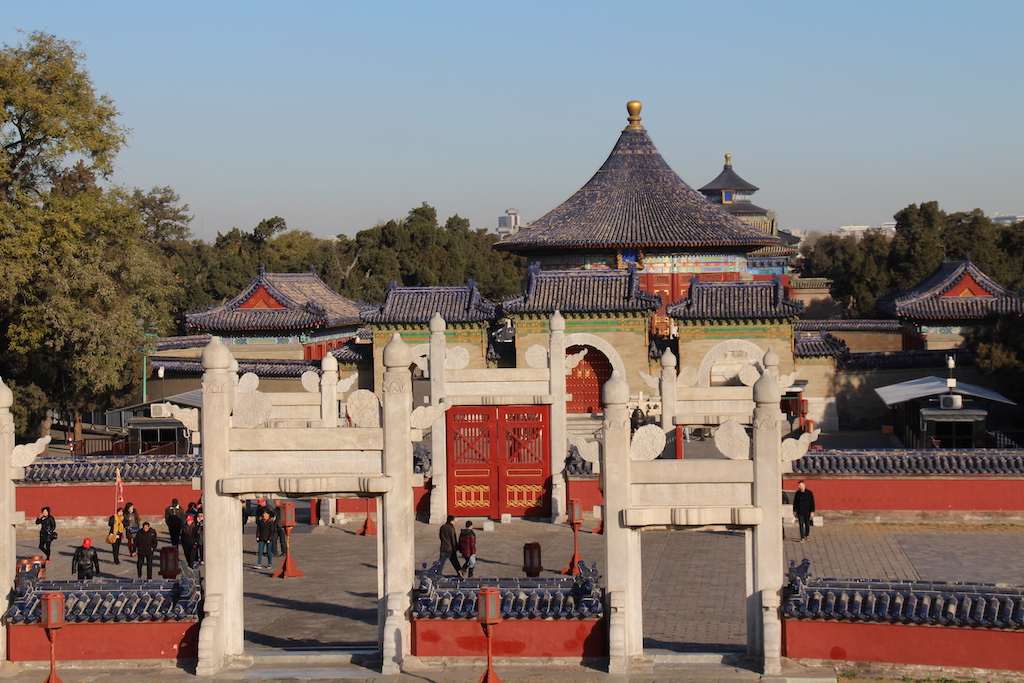 In ancient China, the Emperor was considered to be the son of heaven and thus, this was a very important place for the emperor to worship. This historic site is a really interesting first look at China and helps give perspective on what was important to ancient China. 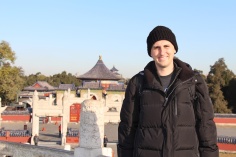 In modern times, it is very popular for local citizens to come here for morning Tai Chi.  The kids were delighted by the number of groups and individuals participating and we spent a while wandering in the park.  If you happen to wake up early (very likely with jet-lag), consider coming here first thing so you can enjoy the atmosphere. 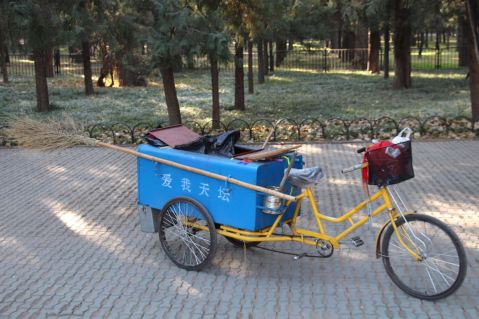 The boys were getting a little tired and hungry, so we decided to stop for a snack at a cafe.

We then took them to a large toy market around the corner. They were amazed! Before entering, we tried to explain to them the art of negotiation and that it is unwise to show extreme excitement over something that you want and that we may walk away if we are trying to get a better price. As a signal, we told them to squeeze our hand if it was something they really wanted. At the end, they were both undecided and we made plans to either come back or find something later.

Afterwards, we went to the pearl market which was next door. While we didn’t buy any pearls, John did find a watch that he really wanted.

From here, we took the subway to subway to south of Tiananmen Square. Jeremy always likes to try McDonald’s in every country, so since it was convenient, we decided to stop there for lunch. How did we order? They have a backup menu card with pictures – just point to the picture of the Big Mac, etc. I was delighted that Chinese McDonald’s have boba tea (also known as bubble tea or pearl milk tea). The “Happy Meal” toys were a bit nicer than their average counterparts at home.

The kids really hated the boxed milk that we got for them, but we kind of wanted them to have milk. One solution we’ve found overseas when you have a kitchen is to get some chocolate milk powder and mix it into your kids’ milk. In this case, we ended up just hoping that the milk tea had some calcium in it for them.

During lunch, before making our way to the square, we quietly told the kids some context about Tiananmen Square and some of its significance/history. (Be careful with sensitive conversations; there is a time and place for different conversations, and in Tiananmen Square is not really considered an appropriate place to talk about some of the history there. Generally, you want to avoid being a jerk when you’re a guest in a different country). 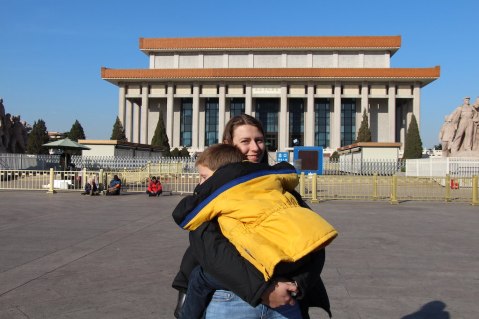 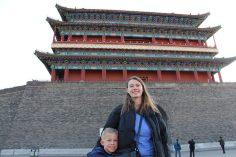 The square is quite large, and a natural place for taking photos. Our grade-school-aged fair-skinned children were apparently a bit of a novelty (there are western adults, but apparently far fewer blond-haired 7 year old boys), and several folks wanted to take pictures with them. 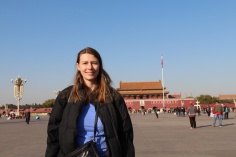 We took our obligatory pictures in front of the Forbidden City entrance, with the large Mao portrait, and ended up talking with them a bit more about the history later in the evening when back at the apartment.

By this point, it was mid-afternoon, and the jet lag was starting to catch up to us. We headed for the train that would take us to an acrobat show that we had booked online. The boys liked the long escalators in the subway stations. 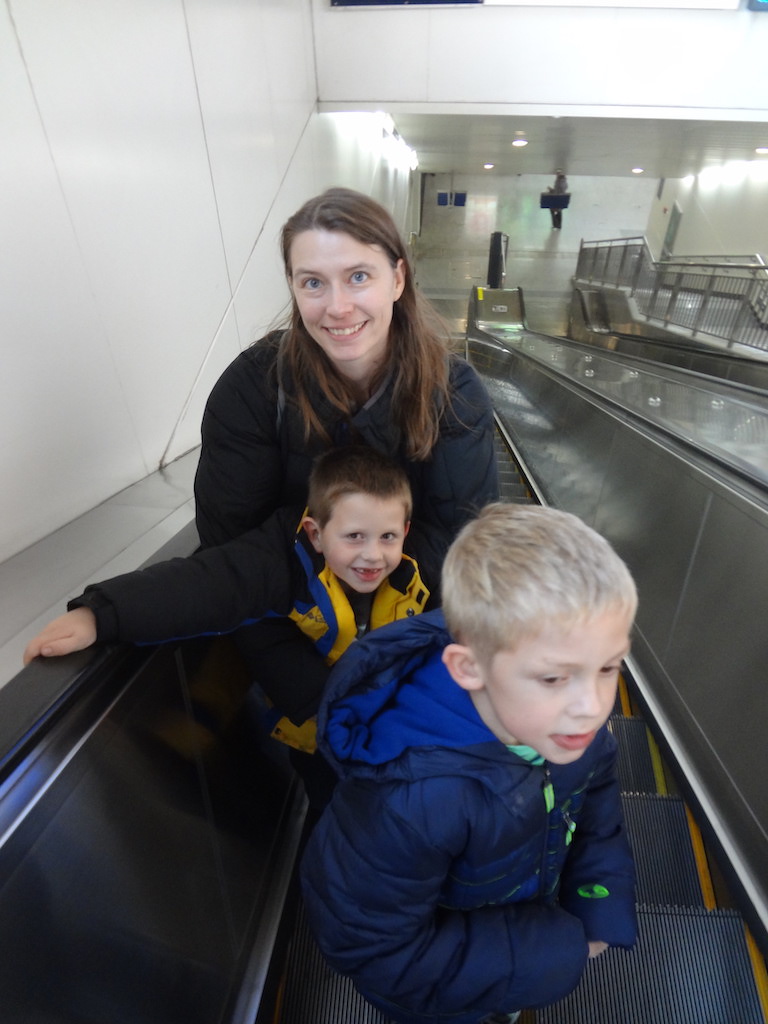 Even though the boys were incredibly tired, they were delighted with the acrobat show. There were the typical tumbling and other routines, but the event that John has the most vivid memories of was the motorcycles. First one guy rode a motorcycle into a hamster ball-like thing. He started doing loops and all kinds of crazy things. Then another guy entered. Then by the end there were somewhere between 6-8 motorcycles in the ball! Completely insane!

By this point, the boys were incredibly tired, so we decided to go find dinner near our apartment.  As it turns out, John was so tired that we ended up carrying him for quite a while.  Too bad we didn’t have a stroller.

At the restaurant, we pointed at some pictures of food on the menus to order, and remember things mostly working out. James was hesitant about the food and just wanted rice.  We tried to order some from the phase book, but it never came, so we must have done something wrong.  These days, Google Translate makes things much easier to communicate.  Simply type something into your phone and show the translation to your waiter, store clerk, or whomever you are trying to communicate with.

But before our food came, John fell asleep.  We tried our best to wake him, but it was impossible, so we took a photo and let him sleep through dinner.