We ended at Herod’s Gate, then stopped by the Church of St. Anne, which is also the site of the Pool of Bethesda. 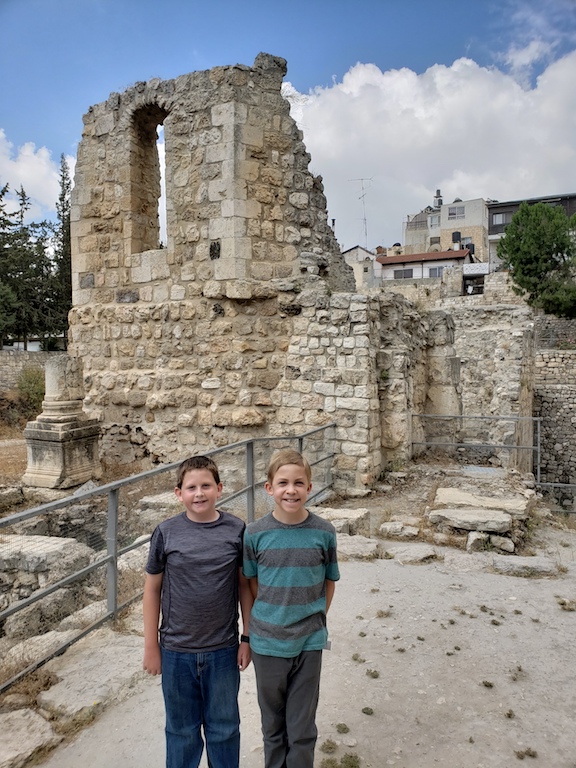 This is where Jesus performed the miracle of healing a crippled man on the Sabbath.  This outraged the Pharisees, and this was the start of their persecution against him. 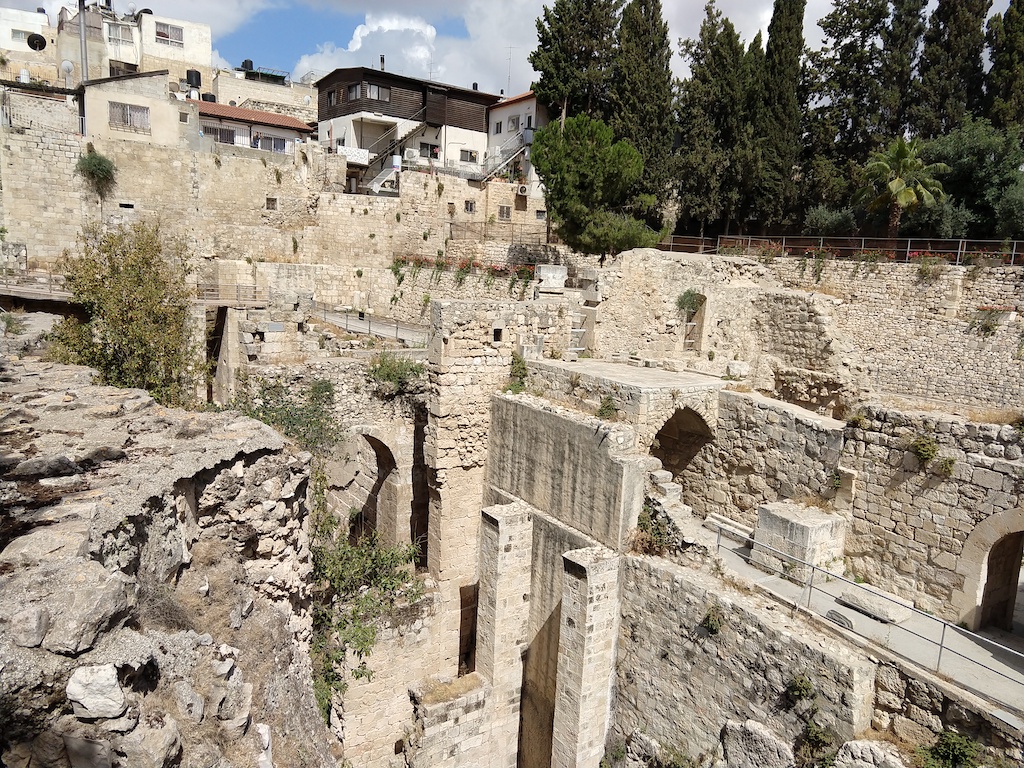 This put us at the beginning of the Via Dolorosa, or Way of Sorrow.  We started with the first station, where Pilate condemned Jesus and had him flogged.  We sat in the chapel where Jesus was condemned for a while and thought about Jesus trial.  The other chapel, we just peeked into since we had sat in there for a while on Sunday.

At this point, we were near the Damascus Gate and decided to take a detour to the Garden Tomb.  Some people think that Jesus was actually crucified and buried here since there is a mountain with some caves that look like eyes, a nose, and a mouth, and fits the description in the Bible of looking like a skull.  But most denominations think that Jesus’ death and burial were at the Church of the Holy Sepulcher. 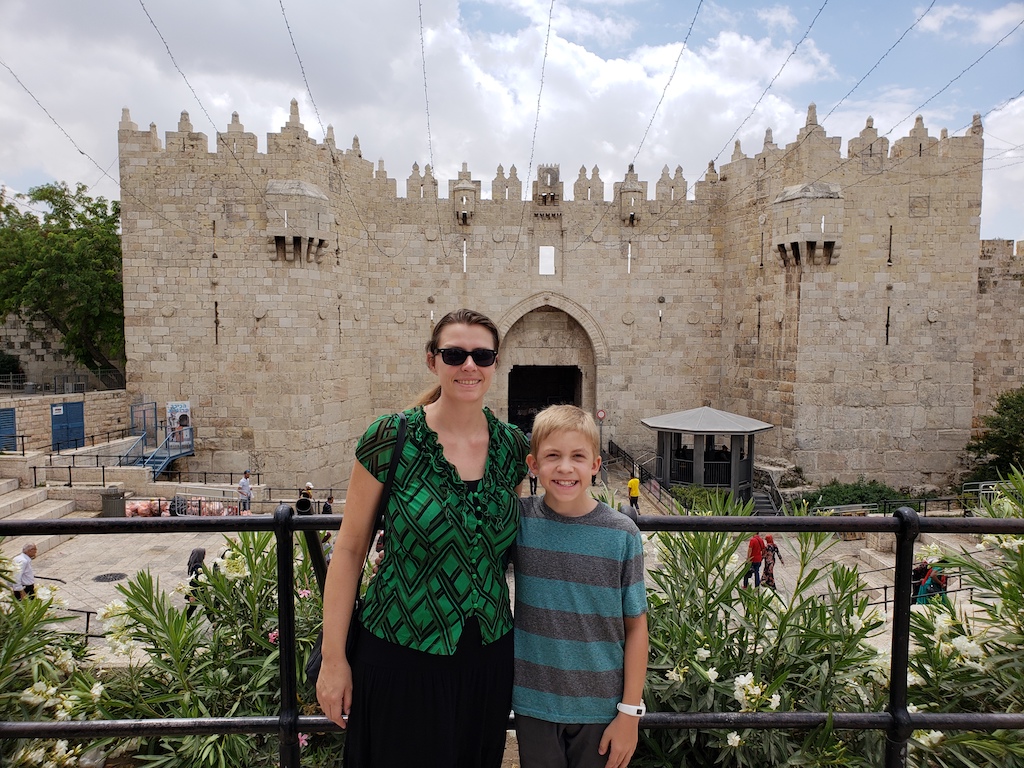 We picked up where we left off and continued on to the fifth station, the place where Simon helps to carry the cross and has another small chapel.  We didn’t go in since there was a pilgrimage group in there.  When some groups come to Jerusalem, they carry a large cross through the city, following Jesus footsteps, singing, praying, and reflecting.

The sixth station is where Veronica offers her handkerchief for Jesus to wipe the sweat and blood off his face.  Some people say that Jesus image was imprinted on the handkerchief, but there is no real evidence one way or the other.

The  tenth through fourteenth stations are all in or near the Church of the Holy Sepulcher.  First, Jesus is stripped of his garments.  Then he is nailed to the cross.  Finally, he dies, he is removed from the cross, and he is placed into the tomb.  We spent a lot of time here yesterday, so didn’t actually go in today.

One interesting, and slightly odd, story that was told during the tour yesterday was the idea that Golgotha was also the burial point for Adam and that the blood from Jesus’ body dripped down the crack from the earthquake onto Adam’s skull, atoning for original sin.  Of course there is no way to prove it one way or the other, but it’s interesting to think about.

At this point, we decided to go get lunch in the Jewish Quarter again.  There are a lot of restaurant choices, and we decided to get the lamb shawarmas.  Yum!

We continued out the Dung Gate and caught a cab to the Israel Museum.  When we arrived, our plans were thwarted.  It turns out that the museum is open from 4:00-9:00 on Tuesdays.  We did not want to wait 3 hours for it to open, so decided to go to the Bible Lands Museum across the street instead.

The museum was nice, but it would have been nicer if we hadn’t just been in Egypt.  We laughed when we saw the model of the Giza Pyramids and asked the boys if they saw anything familiar.  The exhibits were nice and they picked pieces that were fairly intact and that had a lot of detail.  The kids really liked the sections on stamps and seals.  They were impressed to see one stamp that was 8,500 years old.  It was fascinating seeing history from the different people groups mentioned in the Bible.  There were the Egyptians, Assyrians, Persians, Philistines, and tons more.

After the museum, we hopped into a cab back to the hotel.  I was so tired that I slept most of the way back.  We rested for a few hours, then James and Jeremy went for a walk to find gummy worm type candy and a t-shirt.  Unfortunately, even though he tried on a different shirt in the same size, the t-shirt ended up being too small.  Sizes are different in each country.  James is a 10-12 at home, in Egypt he was a 40, here he is slightly too big for a size 16.  The gummy candies were a bigger success.  In the Muslim Quarter, you can get a 1 kg (2.2 lb.) bag for under $3.  The boys love getting them!  I don’t mind either.

After our rest, we went for a walk on the Southern Rampart.  Our ticket covered one trip each on both sides, and were valid for two days.  This Southern side felt taller than the Northern side, and even though I am usually fine with heights, I got a bit nervous.  The stone seemed sturdy enough, but the other side was a little metal railing with too big gaps near the bottom and flimsy attachment points.  The stones are also quite slippery and the boys don’t always use common sense.  That said, it was a lot of fun.

The Rampart Walk ended just before the Western Wall, so we took a quick walk through there.  A lot of men must have just finished work because there were hoards of them visiting the wall.  The boys enjoyed looking at the clothing and hair styles of different Jewish sects.

We wandered back through the markets, picked up a few snacks and had coffee, hot chocolate, and snacks on the roof deck.