After talking with our tour guide on Monday, we decided to go ahead and take a day trip to Bethlehem.  Seeing the place Jesus was born is high on many tourists’ lists, but the details of the trip are a bit complicated.  While this city maybe only 5 miles from Jerusalem, it’s in the West Bank and controlled by the Palestinian Authority. But our tour guide assured us that the Palestinian Authority goes through great efforts to keep Bethlehem safe, to encourage tourism.  Even though Israelis are forbidden by law to visit (foreign tourists are fine).  We try to stay out of their disagreements, enjoy the sites, listen to their very vocal opinions on both sides, and keep our mouths shut.  Fortunately everything went reasonably smoothly, and all we came away with were interesting stories that highlight the feelings on both sides.

We started our day by seeing if we could get a taxi driver to take us from Jaffa Gate in Jerusalem to Rachael’s Tomb (as in the Biblical wife of Jacob).  Rachael’s Tomb is in Israeli-controlled territory, but is right next to the border/wall. There are all sorts of rules about which taxis will go to which territories. The good thing about going initially to Rachael’s Tomb rather than Bethlehem is that it is somewhere any Israel taxi can get to.  Unfortunately, the taxi drivers would only take us if we booked an expensive round trip tour with them.

So, we headed for the bus at Damascus Gate and took the very inexpensive (roughly $2/person) 231 bus to Bethlehem.  Going across the border was easy, the bus just drove through.  There was a big red sign forbidding Israeli citizens to enter.  Once there, we debated haggling with the taxi drivers, and likely getting ripped off, or walking a little less than a mile to the Church of the Nativity.  We decided to walk.  It was peaceful and pleasant, and we were glad we went that route. We felt very safe despite the foreboding sign: 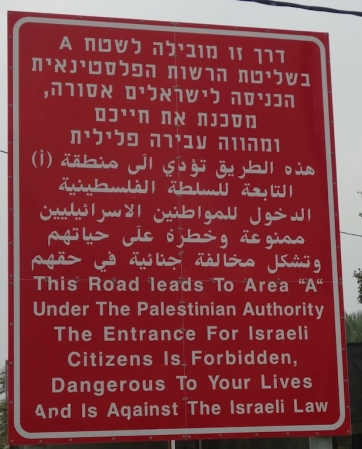 When we were almost there, it started to downpour and we took shelter in a little alcove.  As we were standing there, a cab drove by and offered to take us the rest of the way “for free.”  Sure, right.  “But sir, I recognize you.  Not everything is business.”  At this point Jeremy recognized the driver as the same one who had given James and him a Bethlehem tour 1.5 years ago and realized the driver had also recognized them.  Small world.  This felt like a sign from God that we were safe and that we made a good decision to go.  We decided to go ahead and get in.  Jeremy gave him a tip at our destination and we went on our way.

The Church of the Nativity was very beautiful on the inside, in the orthodox style, but crowded with lots of noisy tourist groups. 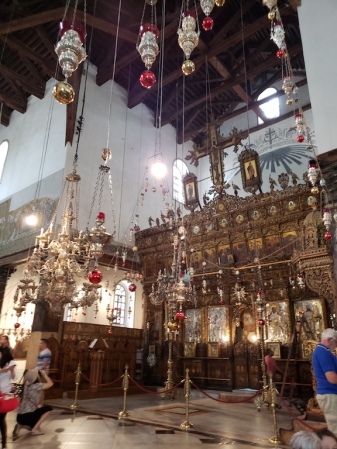 We got in line to go to the basement to see the site of the Nativity and enjoyed the decor of the church.  Enjoying the ambiance was more difficult, although it was fun to catch snippets of English speaking guides. 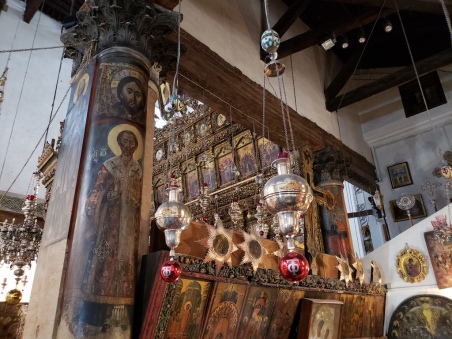 It was super cool getting to touch the place that Jesus was born and see where his cradle lay.  There was a guard hurrying everyone along, but now we can say we saw Jesus birthplace.  There was a second area in the basement that you could see the ancient ruins of the area.  John thought they looked like more stables, but there weren’t any signs in English to confirm this.

Next door was the Church of Saint Catherine, so we peeked inside.  It is Catholic and was less elaborate than its Orthodox neighbor.  The best thing was that it was so much more peaceful than the Church of the Nativity, and in some ways I enjoyed it more and was able to reflect on Jesus’ birth a little better there.  The hoards of tourists trying to see the same site sometimes gets to me and the smaller sites are the ones I tend to enjoy more.

After visiting this church, we went to the Chapel of the Milk Grotto.  The story is that Mary, Joseph, and Jesus were taking refuge in the cave, when a drop of milk from Mary fell on the floor.  This drop of milk turned the cave white.  Like many of the sites, who knows if there is any truth to the story, but it is interesting to think about all the miracles that really happened during Jesus’ time.  We know for a fact that many of them were never recorded, so many of the stories are entirely possible, even if they aren’t probable.

At this point, we decided to get lunch.  We found a place near the square the church was in with a menu that everyone was happy with.  Because it is still Ramadan, many of the restaurants in Muslim areas are closed down, so we thought our best bet would be near the Christian sites.  I had some lamb kababs, Jeremy got some beef kababs, and the boys were excited to have hamburgers.

After lunch, we decided to try and go to Rachael’s tomb.  We knew that we would have to change taxis at Checkpoint 300, the Israeli/Palestinian border, so we decided just to walk.  Unfortunately Google maps led us straight into a big concrete wall.  Fail! 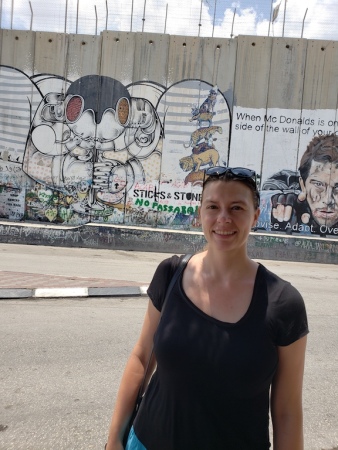 The Palestinian side of the wall is covered with graffiti, reflecting Palestinian opinions about the existence of the wall and other political statements.  The area of town was starting to look less nice, so even though we were fairly close, we decided to hop in an overpriced taxi.  Sigh.

We got out at the border, stood in line for a little while, had an airport-style security check, but when they saw our US passports, they waved us through.  It reminded us in some ways of the U.S./Mexican border.  Easy one way, difficult the other.

On the other side, we decided to try and walk to Rachael’s Tomb.  Unfortunately we encountered a big military zone that didn’t seem to allow pedestrians.   So, back to seriously overpriced ripoff cabs.

At the border going into the Rachel’s Tomb area, our driver was questioned for quite a while.  Once Jeremy spoke some English with an American accent, we were reluctantly waved through.  Going into the area, it felt like we were entering a maximum security prison, with its concrete walls, barbed wire, and machine guns.  At the bottom of the hill, our driver said he would wait for us 10-15 minutes, then we would need to leave.  As we were getting out of the car, we were approached by some people, who gave their opinions about our “Arab” driver (with some unprintable generalizations) and how he wasn’t allowed to be there and that he would need to leave immediately and that they would find us a different taxi driver to take us back up.  We said that we just picked up a taxi driver at the bus stop and that we had no idea about their rules and they let us pass.  We decided to let them figure it out and went into the tomb not knowing what our return plan would be.

The entrance separated the men and women, like many Jewish holy sites.  There were tons of women reading their scripture, touching Rachael’s tomb, and praying.  It was interesting to see how revered she is.  In some ways it almost bordered on worship, but my hope is that the people were giving the true worship to God and not Rachael.  It sounded like the men’s side was much calmer and each of them were given prayer caps to borrow during their time there.

On our way out, we looked for our driver, and sure enough he was there.  We are pretty sure he was technically allowed to be there (the soldiers let him through), but the Jewish people really didn’t like it.  Given the proximity to the border and the tendency for disagreements to become hostile, we jumped in the car as quickly as we could and were on our way immediately.

He dropped us off at the bus station that we met him at.  Fortunately, there was a 234 bus waiting there, and we hopped on.  Why can’t everyone just get along?  Rachael’s Tomb seems to highlight the enormity of conflict.  Some of these peoples have apparently been fighting since Abraham’s time.  Who can fix a disagreement that has lasted that long?

The bus back was uneventful.  We got off at a stop near Jaffa Gate, wandered through the Mamilla Mall and caught another cab to the Israel Museum.  To our relief, our driver turned on the meter when asked.  He then went on to ask us what we had seen.  Then he asked us if we were going to Bethlehem.  Our response that we had been there in the morning was met by severe disapproval and a long speech about him being an honest Christian driver, why we shouldn’t have gone, why we shouldn’t have taken the kids, why we definitely shouldn’t have taken the bus, and was punctuated by a long list of things “Arabs” have done in the city.  We listened quietly, acknowledging as we felt needed.  Everyone has an opinion, but fortunately, as long as we stay quiet, none of it is particularly aimed at us.

The Israel Museum was fabulous!  We started with a huge outdoor scale model of Jerusalem during the time of the second temple (Jesus’ time).  Next up was the Dead Sea Scrolls.  Also very impressive.  We then went into the archaeology exhibit.  There were a lot of similarities to the Egyptian Museum, but it was different enough to be really interesting.  I really liked the mosaics.  The text was also fascinating to read and I spent way too much time reading given that we only had 2 hours before the museum was going to close.  We were able to see the start of the Israeli Life section, but since everyone was exhausted and the museum was about to close, we decided to just return to the hotel.

Time for another cab.  We couldn’t figure out where to catch one that would use the meter, so it was back to overpriced cabs.  This driver gave us his long winded opinion on what we should see at the Dead Sea.  Apparently we should take the kids to a slightly inland town with a chlorine pool so the kids don’t have to get near the too salty sea.  Sigh, but it was a bit of a relief to not have to listen to political opinions.

It was a good day.  I felt safe the entire day.  And while I was hoping for a more profoundly religious experience, what we got was truly interesting and a good insight into the complexities of the middle east peace process.