After a quick overnight along Lake Superior in the upper peninsula (known by the locals as the UP) of Michigan, we decided to spend at least a few minutes looking at Lake Superior. We had made a relatively impromptu goal of seeing all 5 Great Lakes (which we covered over the course of our trip), and decided that we should spend a few minutes at the last one for us, Lake Superior.

As we were getting ready to leave and were entering directions into our GPS, a police officer stopped by and told us that we couldn’t park there since we didn’t have a boat trailer.  We continued down the road a bit and stopped at another pretty spot.  Of course, as we were parking, that same police officer drove up and started talking to another driver about that not being an appropriate spot to park, so we got back in our car and found a better place to leave our car for the 5 minutes we planned to be out of it.

We continued into Wisconsin, passing many dairy farms.  When we saw a cheese factory, I was a bit disappointed that we didn’t have time to stop.  Continuing on, we saw what looked like tons of feathers floating through the air.  Odd.  After a while, we passed a big semi carrying…you guessed it…chickens!  The poor guys must have been off to a processing plant.

We arrived in the Minneapolis area a little after 4:00 and met some friends at Lake Nakomis.  The kids swam, we enjoyed cheese curds, a local specialty, and we had tons of fun.  One of the best parts of driving across the country, or traveling in general, is getting to make small detours to spend time with people that you haven’t seen in years.

In the morning, we decided to see how close we could get to Mount Rushmore. The kids enjoyed seeing many trucks carrying pigs this time.  All the trucks going one way were full, the other way were empty.  Poor pigs.

Minnesota is known as the “Land of 10,000 Lakes,” but in reality, there are actually 11,842.  I love how green everything is.  That has been the wonderful thing about the drive between New Hampshire and here; everything is incredibly green and lush.  As we entered South Dakota, it was still fairly green, but not nearly as much as the previous states.

One of our favorite, but somewhat silly, things about driving through the middle of the country, is Sinclair Gas.  Who can resist the little green dinosaur?  We have seen this brand a lot in Wyoming, but were pleasantly surprised to find it in South Dakota as well. 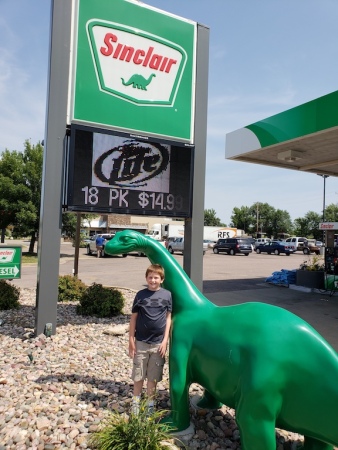 Coming into the Badlands National Park, we decided to detour through the scenic loop.  Since we still have one more month left on our 4th Grade National Park Pass, we even were able to skip the $20 entrance fee. 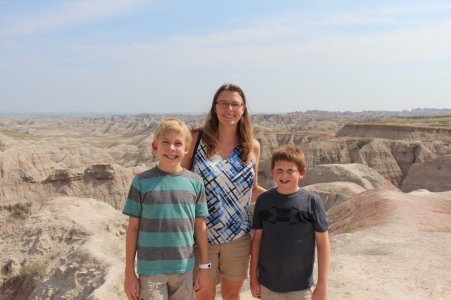 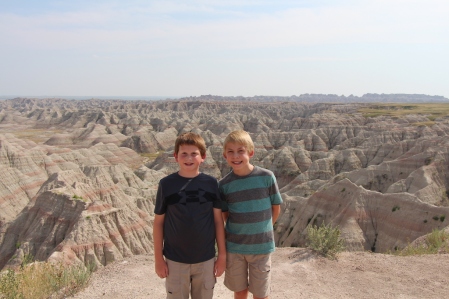 John would have loved to do some hiking, but in 99 degree weather, Jeremy and I weren’t excited.  When we saw the rattlesnake signs, that cinched the deal.  No hiking.  Maybe if we had more time and were able to visit at sunrise, I might have considered chancing a rattlesnake encounter.

In the grassier areas, we saw a ton of prairie dogs, a few mountain goats, and a few blobs that may or may not have been bison.  I loved the little boy giggles as the prairie dogs hopped in and out of their holes.

At this point, we decided there was still plenty of time to stop by Mount Rushmore.  Arriving at 6:00, we were happy to have a nice view of the monument that wasn’t obscured by the setting sun.

Quite impressive!  We were even more impressed after watching a video in the visitor center showing how they used dynamite to remove most of the stone.  If you go, definitely don’t skip the museum as it is very fascinating.  Jeremy remembers going as a middle schooler and similarly to our boys, the dynamite video made a huge impression on him. 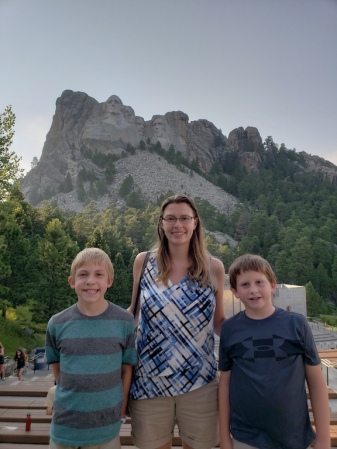 We wandered around a bit, then headed back to Rapid City for dinner and sleep.  When debating restaurants, we decided to chance an Indian place, Himalayan Kitchen, that we spotted on the way to our hotel.  To our unexpected delight, the food was wonderful and decided that the restaurant could easily be successful in California.

This morning we had a reasonable breakfast at the hotel.  Jeremy made fun of me, reminding me that I called our breakfast in Berlin “satisfactory.”  As was the case here, the best American (mid-range) hotel breakfasts tend to be significantly worse than the worst (mid-range) German hotel breakfasts.  Quality is relative.

For this US road trip, we essentially didn’t pre-book any hotels, partly because we wanted some flexibility in days/routes (for the record, our itineraries through Europe/etc. were pre-booked, but even then, maybe only about a month or two in advance). When we went eastwards across the US in May, booking the day of the stay was completely fine. That said, similar hotels on our westward US journey in August have been somewhat more full and more expensive, which I suppose we should have predicted.

We had intended to drive towards Waterton Lakes National Park (Canada) and Glacier Park (United States), but when we checked the hotel availability/rates for the following nights, the remaining options looked quite scarce. The only availability in Waterton was basically the (very nice) Prince of Wales Hotel for CAD$800, otherwise, we’d be staying quite a ways outside the park in a place like Cardston. Similarly for Glacier Park, the town Whitefish that we often stay at was solidly booked, with only a few overpriced options left. In 2009/2010, we were able to book at actual lodges inside Glacier Park last-minute, but that thought now seems so absurd these days.

We decided to explore our options.  Going up to Banff National Park (Canada) wouldn’t add as many hours as you might think, and we seriously considered that option since Banff, and the nearby Jasper Park, are some of my all-time favorites.  If you have never considered traveling to either of these very remote destinations, you really should look into how beautiful this area is and consider going.

Pulling out our AAA maps, we decided that Yellowstone National Park would probably be the more reasonable option, and we booked a hotel for tonight in Cody and another the following night in Jackson, near the Grand Teton National Park.

After finishing this, and being thankful that we discovered the problem before driving many hours in the wrong direction, we set out for North Dakota.  You are probably thinking, “Wrong direction!”  But part of our goal for this trip has been to check off states that we have never been to.  By adding a 1.5 hour detour, we could enter a state that we are unlikely to have the opportunity to visit anytime soon.

We decided to stop for lunch in Bowman, ND, partly to make it feel like we were really in North Dakota and partly because we weren’t sure when we would arrive in another town that had more than gas station food.

We continued on to Montana, and similarly to the Dakotas, were surprised by the greenness.  My memories of eastern Montana were a lot dried than what we encountered.  The drive was quite peaceful, the roads were long and straight, and there was very little traffic, making it easy to use cruise control and enjoy the scenery.  On one particular unpaved road in South Dakota, the boys got a good feel for what the homesteading days may have felt like: miles of nothing except farm or ranch land without a building in sight. There was one particular rest stop near a pond that I loved until I saw the sign warning that rattlesnakes had been spotted and that we should stay on the sidewalk. 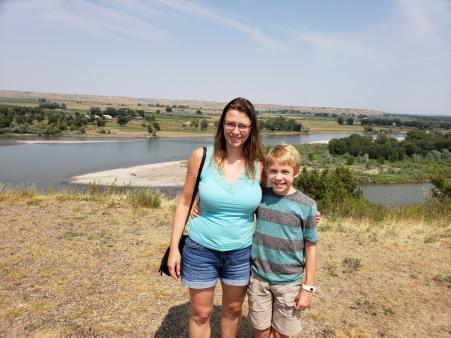 When we arrived in Wyoming, the landscape became much drier, but more mountainous.  Pretty, but different from the previous states.  Everyone was relieved to get into Cody before 6:00.  We found a nice pizza restaurant and came back to the comfortable, but slightly musty smelling, hotel to relax.