After a night in Cody, we took an incredibly beautiful hour drive to the Yellowstone National Park entrance.  Once again, we were able to take advantage of our 4th Grade National Park Pass that will sadly be expiring at the end of the month.

Entering the park, we were a bit disappointed that it looked like a fire had swept through, but as we got to the main area of the park, it started looking better again.  After stopping at the Fishing Bridge Visitor Center, which had a beautiful view of the lake, we decided that we would do the southern loop. 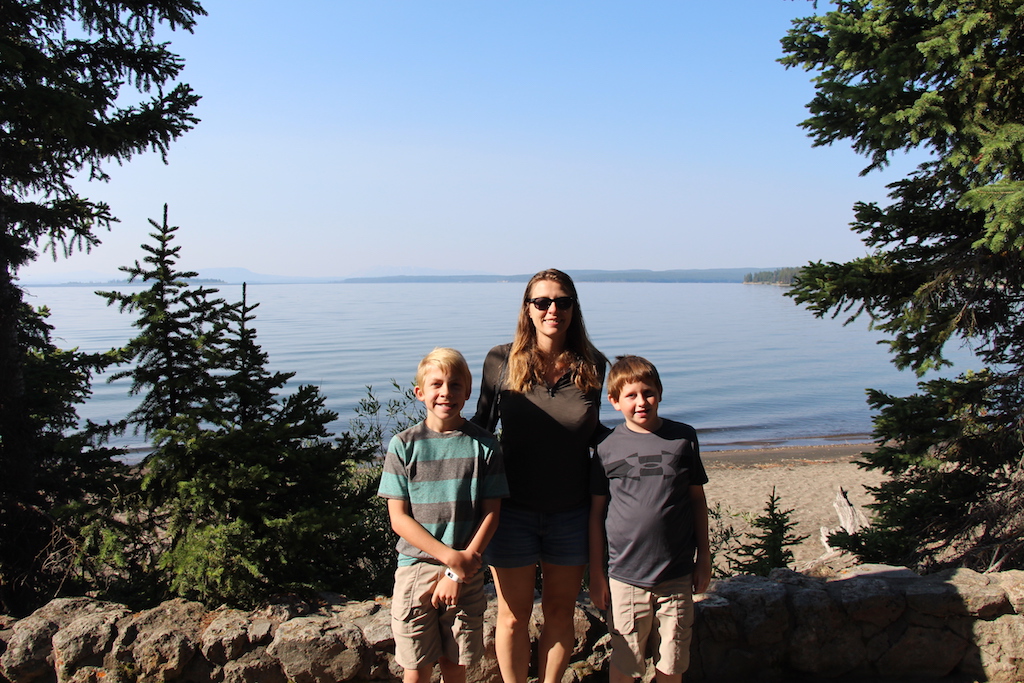 They also had a really nice museum with a ton of stuffed birds that the kids thoroughly enjoyed.  Before getting in the car, we decided to spend a few minutes on the beach. 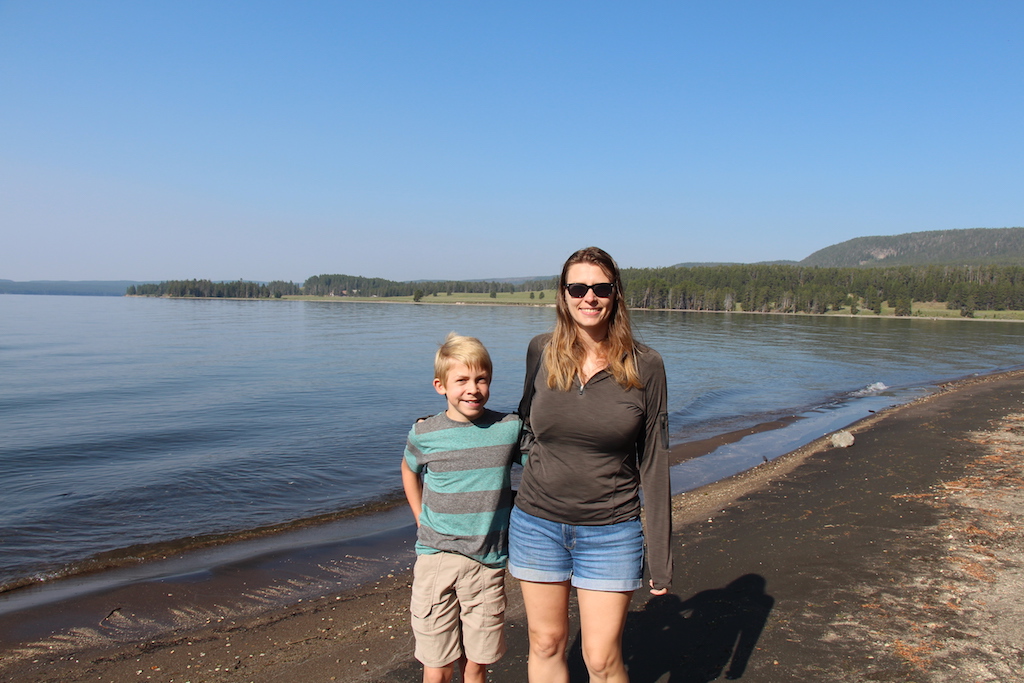 Our first stop was the Mud Volcano, which was really fun.  James spotted a buffalo lounging just off the path.

It was a little too close for comfort, but since he was acting peaceful, we snapped a few pictures and continued past him.

We did a loop through the major sites, particularly enjoying the Dragon’s Mouth, which definitely resembled a fire breathing dragon.  There were a lot of steaming or boiling pits of water or mud, but we didn’t see anything erupt.

This area reminded us a lot of Rotorua, New Zealand, which we visited in April.

Getting back into the car, we drove until we came to a wonderful herd of buffalos! 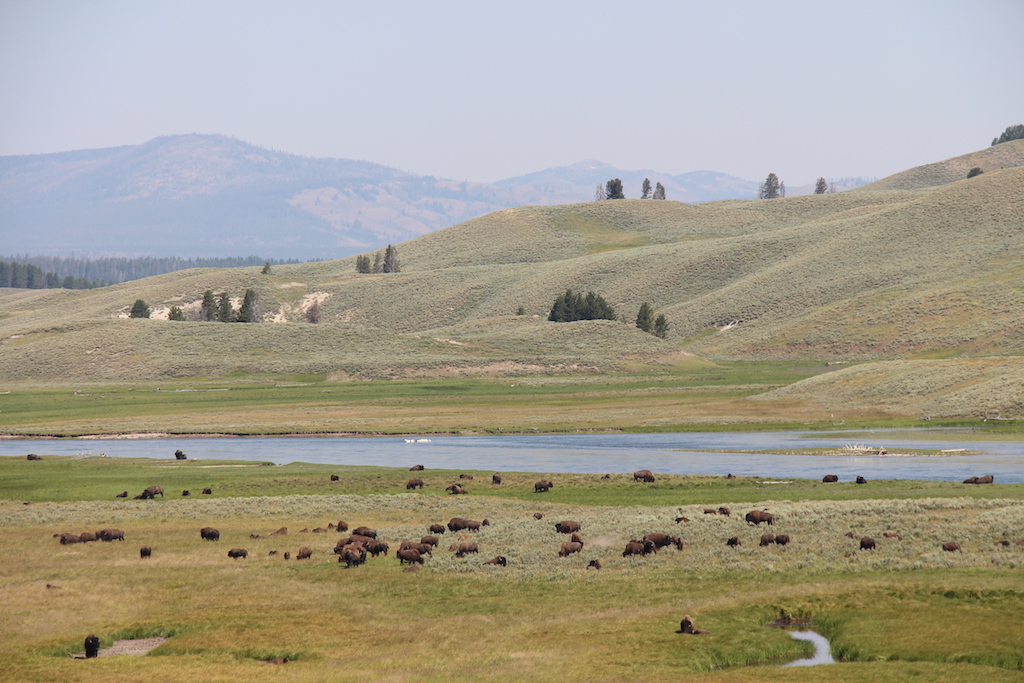 Traffic was super slow, so we had tons of time to take a zillion photos. 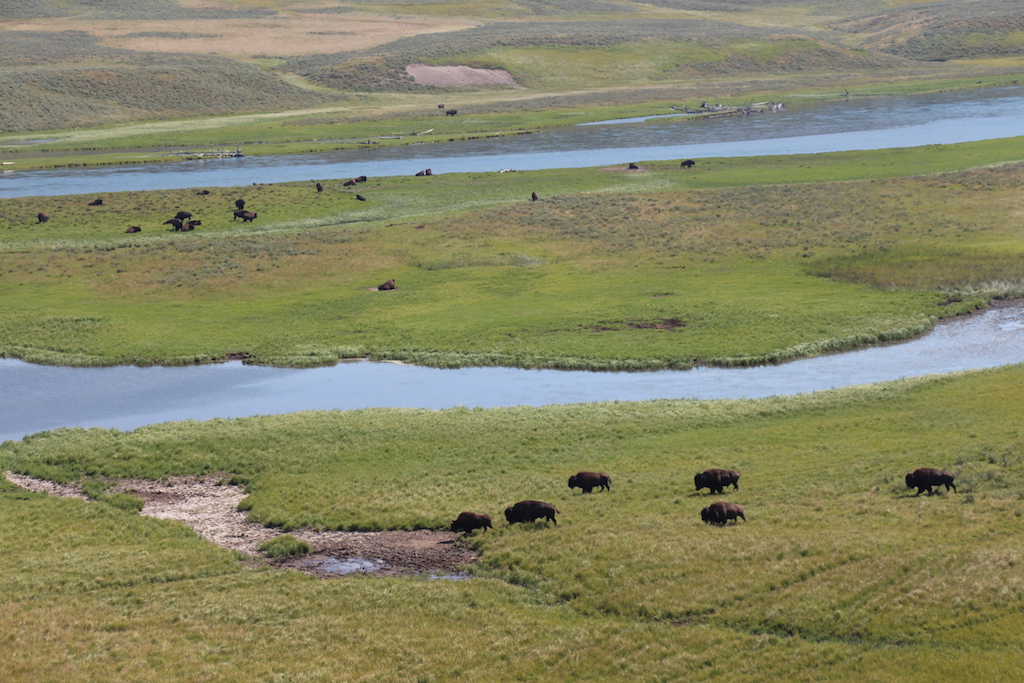 John was delighted when two of them got into a tussle and started chasing and head butting each other.  We weren’t sure whether it was a playful tussle or a fight over a female, but it really highlighted both the speed and the power of a buffalo.  Other buffalo spent some time rolling in the ground, or were just hanging out and grazing.

As we approached the end of the herd, we realized why the traffic was moving so slowly.  A few stragglers were crossing the street to reach the rest of the herd.

The boys loved how close we were to the animals! 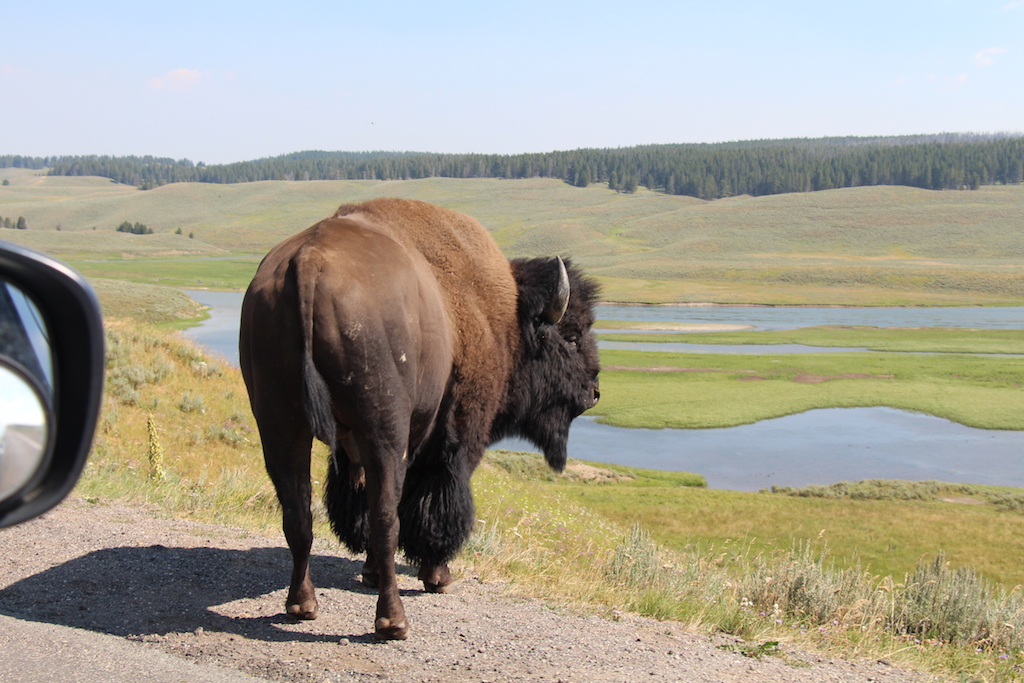 After getting our animal viewing out of the way, we drove to Canyon Village and stopped for lunch.  I had intended to pick up some picnic stuff to eat by a nice lake, but forgot until we were already in the park.  Oh well, my bison burger was delicious.  John refused to try it, claiming that he couldn’t eat such a cute creature.

Next up was the Norris Geyser Basin, which we almost passed up due to a standstill getting into the parking lot.  Fortunately, we decided to continue on without entering the standstill and found a super easy parking spot on the street.  We then breezed a quarter mile down the road, arriving much faster than any of the cars we walked past.

The basin was really cool!  The colors were amazing and we were very glad that we didn’t pass it by.

Some of the pools were crystal clear.

After finishing the basin, we stopped by the tiny museum to learn about how geysers work, then we continued on to the Steamboat Geyser, which only has a big eruption every 4-5 days, but has fairly continuous small ones.  Everyone was quite impressed. 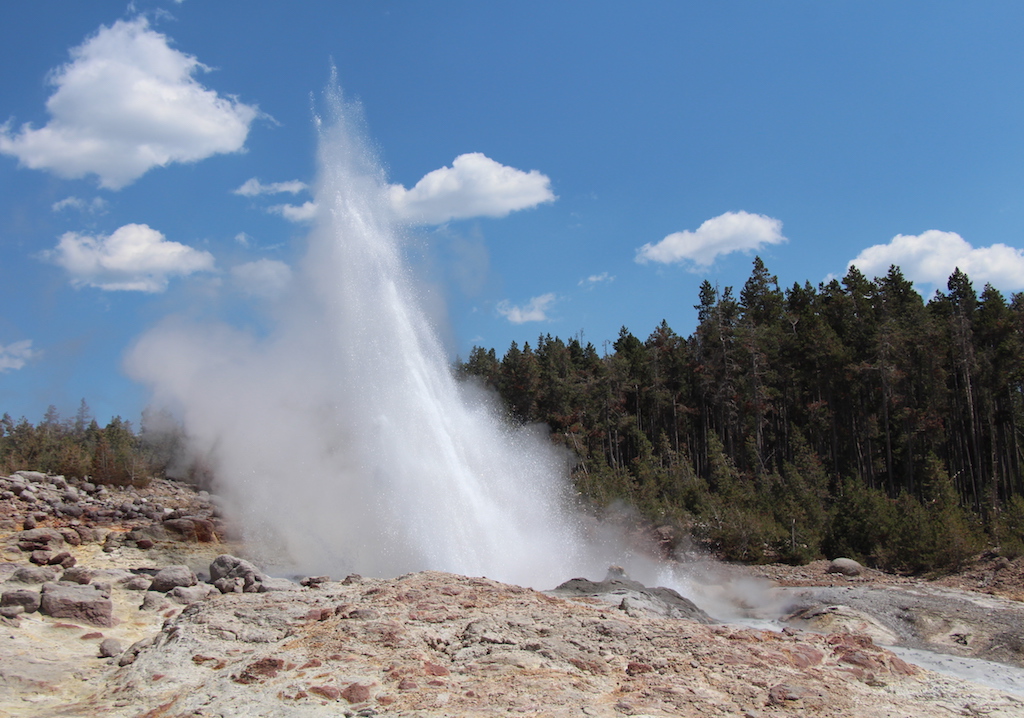 Walking back to the car, we continued on.  Everyone was getting a bit tired and cranky, so we skipped a bunch of waterfalls, rivers, and lakes since we had seen so many of this type of feature while in Minnesota.  We also skipped the Lower Geyser Basin, even though it looked super cool.  If we had to pick one more major stop, we all agreed that it should be Old Faithful.

Of course, when we were about 5 minutes away, Jeremy and I saw it erupt and knew it was going to be a long wait for the next one.  Since we had an hour and a half, we wandered a couple of the loops around some of the other geothermal features.  When we first arrived, we were able to enjoy a minor geyser that decided to erupt in grand fashion.

Many of the pools were quite beautiful.

One of the park rangers was walking the paths, picking up trash and loose items with a long pole with pinchers on the end.  There were a surprising number of hats that had blown off some unfortunate peoples’ heads.  One hat was just outside of his reach, so a person that was taller than Jeremy – which means really tall – offered to try to use his longer arms to get it.  When that failed, the ranger explained that it was too dangerous to walk on the ground due to the thin crust, but that sitting on the edge of the boardwalk and leaning a little on the crust was usually okay and would extend the reach by an extra foot and a half.  Scary!  Since the hat was a little further than that, the guy declined to try.

As we circled back through the forest, we wondered how warm the stream was.  Was it glacier water, geyser water, or a combination? 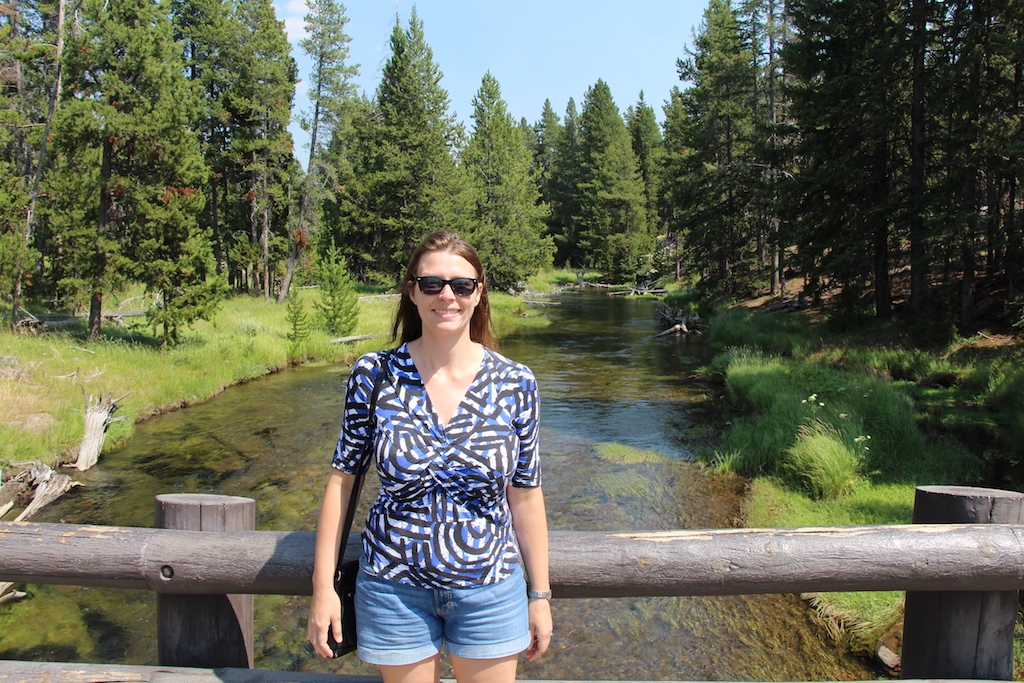 After walking for about 45 minutes, we got some ice cream and found a good spot to wait for Old Faithful.

Once the geyser started to splutter, we got a bit closer and counted down the clock until the predicted time.  It started right on schedule and was quite nice.  Unfortunately, or memories painted it bigger than it actually was and we were a bit disappointed.  Maybe it was a smaller eruption that normal, or maybe our previous experiences were larger, or it could just be that we amplified our memories to something that wasn’t real.  In any case, it was still super cool.

It was getting close to 4:00, and we still had a couple hour drive through the Grand Teton National Park, so we decided not to stop anywhere else inside Yellowstone.  There is so much more we could have seen, but since time is limited, it was enough.  I would love to spend a few days camping by a nice lake or river in the park.

Just after exiting, there were signs indicating that we were entering the Grand Teton Park.  Similarly to our entrance to Yellowstone, we were a bit disappointed by the trees that had suffered forest fire.  Most of the Yellowstone landscape has recovered from the massive 1988 fire, after all, the trees have had 30 years to grow back to a reasonable height.  However, it appears that they tend to do fairly regular controlled burns that should prevent a catastrophe like 1988, but the remains of the burns do remove a lot of the beauty.

We were further disappointed by the haze.  Historically, the Grand Teton Park has been one of my favorites due to the majestic mountain views, but without clear views of the mountains, there is a lot of scrub brush that remains.

We made a few quick stops along the lake. 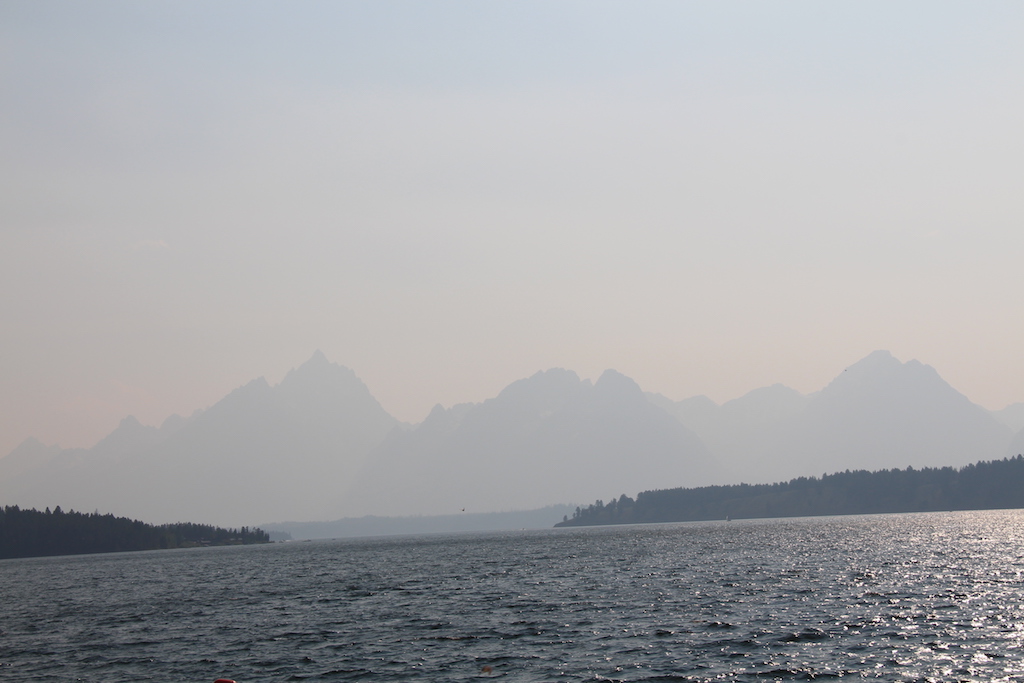 Then continued our drive to Jackson Hole, a popular ski resort that is just south of the park.  After checking into our hotel and getting dinner, we wandered the town a bit, enjoying the antler walkways and a few of the gift shops.  John particularly liked one shop that had both stuffed animals and hides of many varieties of animals.  The stuffed animals were posed into various scenes that he thought were hilarious.  There was the skunk in the canoe with some other animals, a squirrel with a rifle, and many more.

More from Adventures of the 4 JLs!

National Parks in the USA

National Parks around the World