I’m continuing down memory lane with our second stop in Peru.

We took a flight from Lima to Cusco, which is a place we were really interested in seeing, but which we also decided to save for after altitude acclimation. While Lima is at sea level, Cusco is at 11,152 feet, which is more altitude than is recommended to adjust to in a single day.  To help acclimate, we drove directly from the Cusco airport to the nearby Sacred Valley, with an easier-to-breathe elevation of 9,373 feet.

We met our new guide at the airport and were taken to the lovely Hotel La Casona de Yucay in Sacred Valley. The hotel was quite nice, a place booked by the tour agency, though a bit less central than a place that we might have booked ourselves. We had a beautiful split-level room, which the kids’ bedroom downstairs and our bedroom upstairs. There were two bathrooms, and even though we couldn’t see them yet, we had the feeling that the grounds were amazing.

It was dark, so we decided to just eat at the hotel rather than try to wander the town.  While in Cusco, the kids started counting stray dogs and got to at least 50.  We didn’t want to risk an unpleasant encounter our first night.  The dinner was great!  I decided to try the alpaca rolls, and was quite pleased.  John was less happy with the type of cheese used on the pizza, but we told him that is part of traveling.  You get to experience the ways that someone else prepares food that you thought you knew everything about.

Even though Yucay is a slightly more sensible 9,373 feet, and we were taking altitude sickness medicine (some of us the prescription from the doctor’s office, others a natural remedy that was supposed to have fewer side effects), John still woke up with moderate altitude sickness.  He had a severe headache and didn’t feel like eating much.  Tylenol/Ibuprofen also had no effect.  The rest of us were having more mild symptoms that included shortness of breath, a fast heart rate, and a very mild headache.  We took some combination of diamox medication and natural ones to deal with it, but when the hotel staff saw his difficulty, they also offered the somewhat controversial local remedy.  Read up on it before traveling if you decide to try it.

Instead of booking with our tour company while in the Sacred Valley, we ended up booking a driver with our hotel’s front desk, which was somewhat cheaper. For about $70 total, they gave us a taxi and driver who would take our family to various sites for the day. For the first day, the recommended trip that we took was the Salt mines in Moras, the Inca terraces in Moray, the fortress ruins in Ollantaytambo (Ollanta), then back to the hotel.  One mentioned caveat is that the driver didn’t speak much English, but that wasn’t a big deal for these particular places (plus, Jeremy got to practice his Spanish from school). We wandered the hotel grounds a bit:

Then sat in the hotel lobby until our driver arrived:

After arriving in the dark, we got our first look at the land.  We were a bit surprised by how dry it was, but given that we came during the dry season on purpose, maybe it shouldn’t have.  One thing we noticed were a bunch of hut like things that we were pretty sure were used for migrant workers during planting/harvest times. 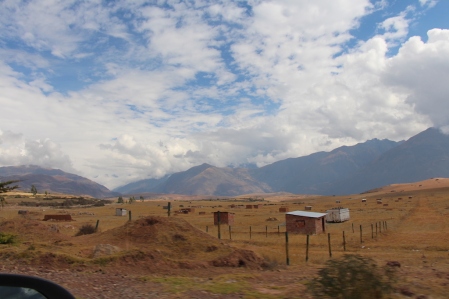 Our arrival at the salt mines in Moras was amazing.  I have never seen anything like it.  Death Valley has the salt flats, but it was fascinating to see what an active evaporation-based mine actually looks like. 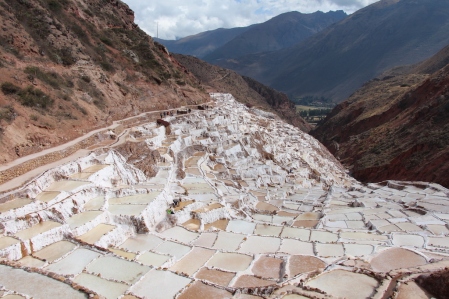 The boys were just as excited by it as Jeremy and I were.  There were some nice trails that we were able to explore.  It was fascinating to see that each rectangle was owned by a particular person.  There is a very salty underground stream nearby that feeds into a spring.  The water is then redirected into individual rectangles that are owned by various community members.  As the water dries, salt crystals form on the surface and the owners can come and harvest them.

The boys loved the big piles of salt and we had to explain that they were someone’s income and were to be left alone.  Tasting or disturbing the piles was very tempting, but the boys managed to restrain themselves.  After seeing an very old, and obviously poor, woman carrying a heavy tarp filled with salt crystals on her back up the steep hill, I think what we were saying may have registered with the boys.

We walked down quite a ways and thought about going further, but with all of us suffering from the altitude, we were a bit nervous about the climb back to the car.

We made it back up, but decided that hiking might not be a great activity until our bodies acclimated to the altitude.

Getting back into the car, we continued on to Moray.  On the way, we encountered some farm animals.

On arrival, the Inca Terraces jumped out at us.  We decided to follow the path around, and even though we were still concerned about altitude, we also went down to the bottom. 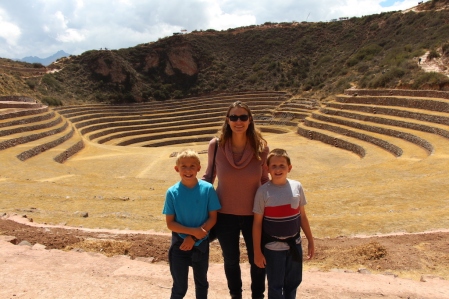 Nobody knows what the terraces were used for, but one theory is that it was used as an agricultural experiment site where the Incas could vary the elevation, sunlight, and more.  Or it could have been a religious site.  Or a meeting site.  Or a number of other things.

We saw a hill going up, and even though we were all feeling quite miserable from the altitude, we decided to see what was over the hill. 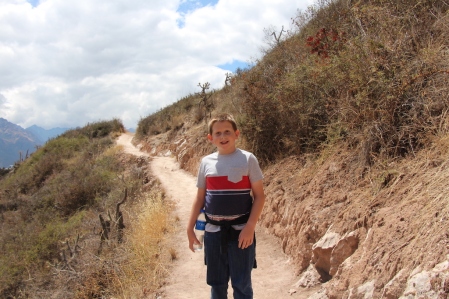 The path eventually circled around back to the car and everyone was relieved to go for another drive. 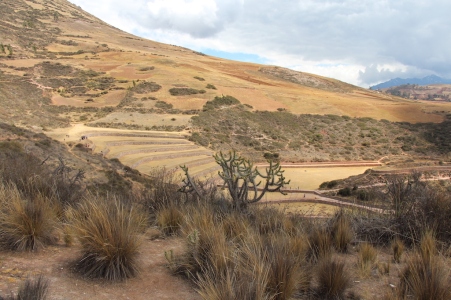 On the way to Ollantaytambo (the locals call it Ollanta), we saw a lot of beautiful scenery.  We even saw someone plowing their fields using some very old equipment that was pulled by cows.  I would have loved to get a picture, but the road was quite narrow and winding, so I didn’t want to ask the driver to turn around.

John loved a rickety bridge we had to cross.  Jeremy and I said some prayers that we would survive.  If Indiana Jones had a car in the Temple of Doom, this might be the bridge they would show. 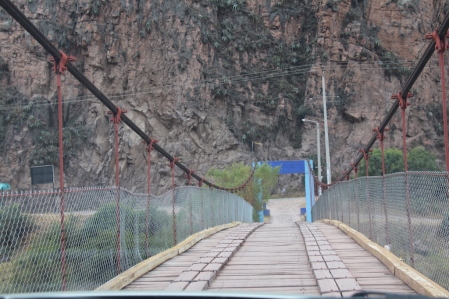 Our first order of business in Ollanta was to get lunch.  We found a restaurant in a square and I decided to order cuy.  What is cuy?  Guinea pig.  Yes, that is right.  Basically I ordered a rat for lunch, but where else am I going to get the chance to try it?  It was fine, but I’m not quite sure why it is a delicacy that can be compared to a lobster dinner in the United States.  There is little meat on the cuy, and what is there tastes a bit like chicken.  Mostly, it is just skin.  If you like chicken skin, it is fine, but a bit tougher and stringier than chicken skin.  I decided it was fine to do once, but it wasn’t something I was going to order again.  My potatoes came with a really nice avocado lime salsa.

James decided to try the alpaca, and found it to be delicious.  He gave us strict orders not to tell his stuffed animal and the stuffed animal’s imaginary girlfriend, “Alpaca and Maria.”  Jeremy got the ceviche, basically a South American marinated sushi in lemon juice, which was also amazing.  All-in-all, a very nice lunch that introduced us to many of the foods unique to Peru.

After lunch, we headed over to  the Inca Fortress, which turned out to be super interesting.

The path up was a bit steep, but it was nice that once we made it up, we knew the downhill would be easy. 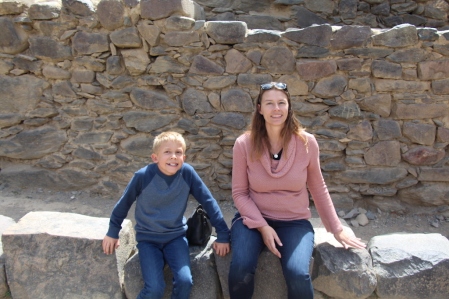 It is amazing what the Incas were able to do with the technology available at the time.  And they did it all without draft animals.  Llamas could carry a sack of potatoes, but that was the strongest animal available to them.

You can see how perfectly the stones in the temples fit together.  They fit so closely, that you can’t even fit a piece of paper between them.  They can withstand earthquakes and other disasters. Talking with the local guides, the theories include a lot of supernatural theories since there is no evidence they had the proper tools to support the engineering required.  Regardless of how they actually did it, it is quite amazing when you consider the time period! 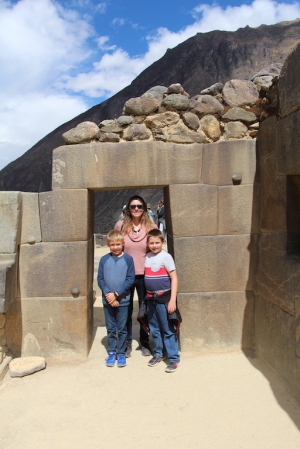 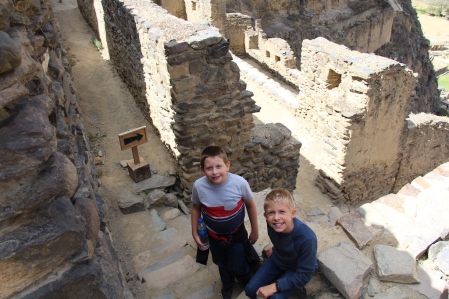 And we got a nice view of the city. 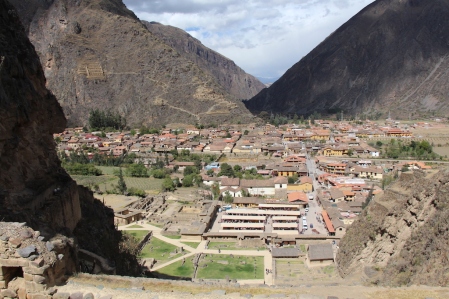 Some friends of ours that were living in Africa had described how to build thatched roofs, so when we saw one, it was a perfect opportunity to point out the features that our friends described.

Returning to the base of the hill, we wandered through the market.  James spotted a backpack with a picture of an alpaca that he loved, so we went ahead and bought it even though the quality was dubious.  Definitely not strong enough for school books, but we thought it might work as a pool or gym bag.  He was thrilled with it.

At that point we headed back to the hotel and decided to wander around the town of Yucay.  It was quite sleepy, and isn’t typically a place we would stay, but the hotel more than made up for it.  If we would have stayed in Ollanta, Urubamba, or Pisac, odds are we wouldn’t have been in as nice of place, but it would have been nice to have somewhere to go in the evenings.  That’s the tradeoff for buying a package that includes hotels.  You don’t have to spend the time researching and planning, but you also tend not to get everything that you were looking for.

After wandering, we decided to just hang out in the garden on the hotel grounds, sit in some nice chairs, and drink tea.  I spent some time journaling, John read his book, and James and Jeremy explored a bit.

There were two other restaurants that looked like they conformed to reasonable health standards, but since the kids favored the menu at our hotel, so we decided to eat there again.  The pizza and spaghetti weren’t appealing to their American tastebuds, but the hamburgers seemed to make them happy.  This time I tried the pork that was prepared the local way and found it to be super tender and delicious.