After looking through my stack of travel journals, I am beginning my adventure back though time, starting with the trip that started our crazy year of travel that spanned 6 continents, many countries, and totaled about 5 months of travel.  This began with a trip to Peru.

Our adventures began with a 7:00AM flight from San Francisco to San Salvador, El Salvador. Flying on Avianca was fine, but not great.  Breakfast was very mediocre, lunch was mediocre and small, and the layover was quite nice.  The windows were well situated for airplane viewing, the interior was quite clean and sparkly, and the food was nice.  All the restaurants were overpriced, but given that we had a small lunch already, we weren’t particularly hungry, so we picked something that had a decent snack menu with a nice view.  I thought I had ordered a quesadilla, but I ended up with some slightly sweet bread thing.  It was good, even if not what I was expecting.

We continued on to Lima, and it was the evening by the time we arrived. After going through customs, we met a woman from our travel company.  On the ride to our hotel, she gave the impression that we shouldn’t try to go anywhere on our own and seemed very nervous about the idea of us trying to navigate the city without a leash provided by her company.  Not at all what we were expecting!  Usually, we try to travel very independently, but since South America was new to us (and we booked at the last minute, didn’t have time to do a ton of research, and had the kids in tow), hiring a company to do the logistics and shuttle us around seemed to make sense.  Peru is a fairly inexpensive country, so it really didn’t add all that much to the cost of the trip.

Jeremy ignored her advice, I put the kids to bed, and he took a nice walk to Mira Flores.  It is so nice to be able to fly somewhere far away without a huge time change.  We looked forward to waking up without jet lag and being able to start our day.

In the morning, we had a delicious breakfast at the hotel, the NM Lima.  The variety and quality were both very nice.  The hotel staff cautioned us that there were some teacher strikes and that many of the roads were closed.  Looking at a map, we decided to go ahead and take an Uber to the historic center.  Worst case was that we would have to take a long walk back to the hotel.  We had been cautioned about taxi drivers not understanding English, so Uber seemed fairly safe since the driver would have a pinpoint on both where to pick us up and where to drop us off. 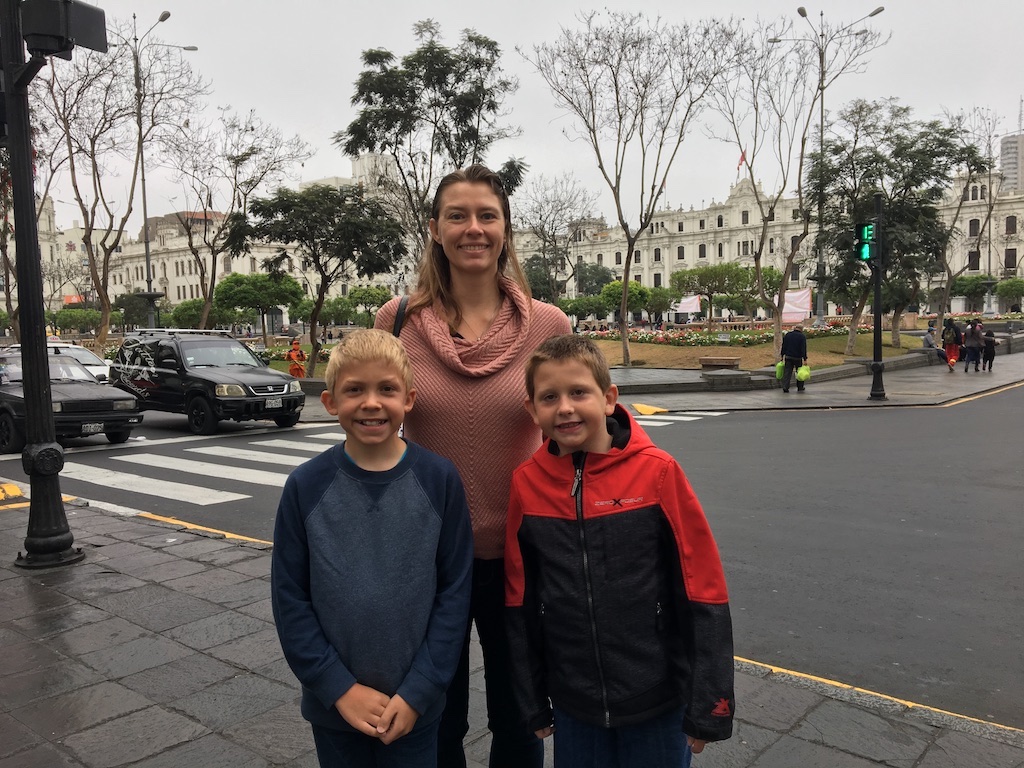 The exterior of many of the buildings was fairly elaborate, with a nice colonial facade.  This is a city that surprised me.  I’m not entirely sure what I was expecting, but I wasn’t expecting it be as developed.

Some of the churches allowed us to peek in and walk around the back while services were in progress.  The churches were full!  When traveling in Europe, it is always sad to see these amazing Cathedrals that are only used for tourists.  In comparison, the churches in Peru felt alive.  We couldn’t understand much of it, but the preaching style seemed to be quite intimate.

We decided to head over to the catacombs, and were told that the next tour was in 5 minutes.  After 40 minutes of 5 more minutes, we decided to leave.  Fortunately, the time wasn’t completely wasted.  Just outside the catacombs entrance there was a celebration to La Virgin Saludad de Cayo.

The costumes were quite interesting and they had a band that included tubas and trombones.  Super fun surprise! 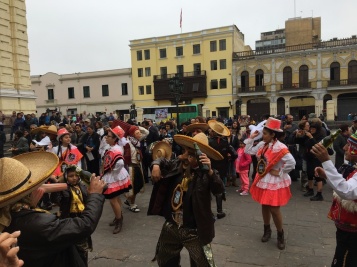 After leaving, we wandered through a market that a ton of chickens, ducks, turkeys, and pigs, all of which were displayed whole.  The kids loved it!  It’s always interesting to see where your food actually comes from.  American markets should do this.

We did some more wandering, then got some churros.  We were surprised to discover that they were filled with a really tasty cream that our tour guide later told us was manjar blanco. 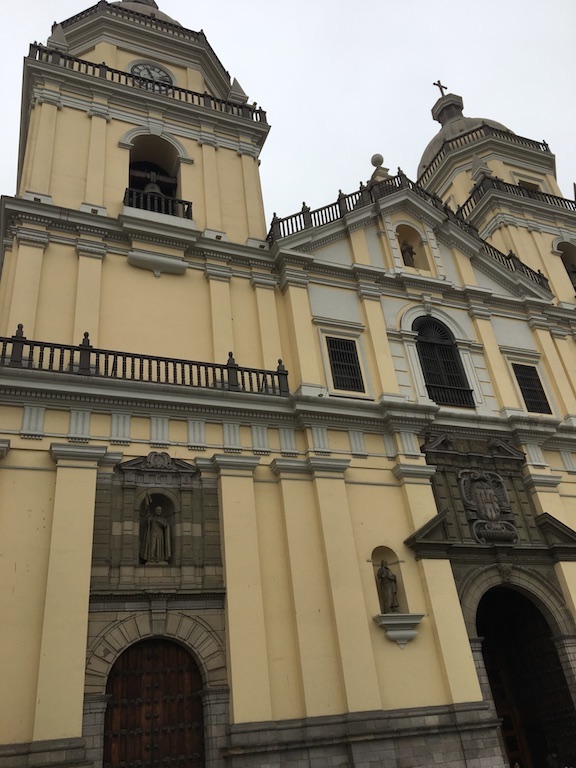 At this point, we decided to get lunch and realized that this would likely be one of our main opportunities to get McDonald’s food.  Jeremy always tries to try it in each new country, and given that this was a new continent as well, he didn’t want to miss out.  Uber was being difficult, so we decided to chance a cab and gave the name of a movie theatre and pointed to it on the map.  It was both close to our hotel and next to a McDonalds, so was perfect.  Unfortunately, traffic was bad due to the teacher strike, and he ended up trying to take us to a different movie theater, at which point we realized the problem and uses some limited Spanish to try to convey what we wanted.  The end result was getting dropped off near another McDonalds that was a bit further from our hotel.

After lunch, we met our guide at our hotel and drove to the airport where she “helped” us with navigating the airport.  When we asked if we really needed help, she told us that lots of people “lose their way” when trying to find the departure gates.  Basically, that meant that she stood in line with us at the checkin counter, walked with us to the security area, and pointed out restaurants on the way.  I guess it was nice, but since all the signs were in both Spanish and English, we had a lot of trouble justifying her being there with us.  Our leashes were starting to feel like choke chains and we were having second thoughts about hiring a tour company, but we kept an open mind and thought it might come in handy later.

In the airport, James spotted his favorite donut place, Dunkin’ Donuts, so we let him get one while John and Jeremy got an ice cream cone.  After going through security, we found a nice view of the runway and waited for our plane to depart for Cusco, where we would then travel to the Sacred Valley.