With the quarantines lightening up, and our boys starting to become a bit stir crazy, we are trying to explore the area around our new home in the Greater Boston area.

On that note, we just moved cross-country this spring 2020. It’s been somewhat crazy, and an entirely different story. We used to live in the Boston area years ago, and decided in early March (right before the world changed) to move back. On the plus side, we haven’t been bored during the quarantine (lots of boxes to pack and unpack!).

Jeremy has memories of biking out to Walden Pond years ago, so one of his first bike rides with James was to that pond. James decided that I should take him there again.

If you are near Boston and interested in US Revolutionary War history, it’s worth visiting both Lexington and Concord. On April 18, 1775, the British troops set out for Lexington with the goal of capturing Samuel Adams and John Hancock, and Concord with the goal of seizing a Patriots’ arms stockpile. Thus started Paul Revere’s midnight ride to warn them.

While you are in Concord, you should stop by Walden Pond, hike the 1.7 mile full circle around the pond, and consider stopping for a picnic or a swim. 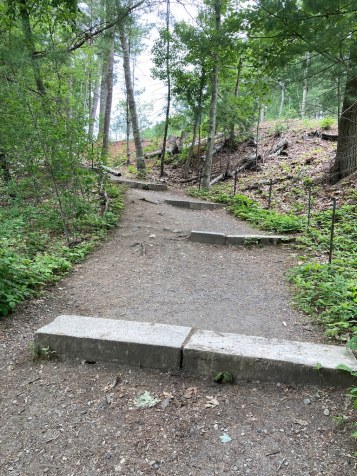 There’s a pay parking lot across the street ($8), though Jeremy and James took advantage of the free bike parking.

Walden Pond was made better known by Henry David Thoreau in the 1800’s, who built a small rustic cabin on its shores, and pondered themes such as “self reliance.” A leader in the Transcendentalist movement, Thoreau’s best-known book Walden was written during the 2+ years he spent reflecting on life by this pond.

A year before moving to Walden Pond, he had an accident where he started a forest fire, and while he claimed that he was at peace about the accidental nature of it, his neighbors probably weren’t as kind. This in combination with his Transcendental leanings prompted him to move to the woods. That said, he wasn’t completely isolated – it was less than a 2 mile walk back to town.

Thoreau’s years in the woods were his way of experimenting with his views and trying to prove them, thus becoming the best person that he was capable of becoming and “transcend” above the baser natures of life.

After parking, but before you cross the street to get to the pond, make sure you stop by the replica of Thoreau’s cabin.

James was quite surprised about how tiny it was and we had the opportunity to talk a bit about Transcendentalist’s belief that simple living is better than capitalism. 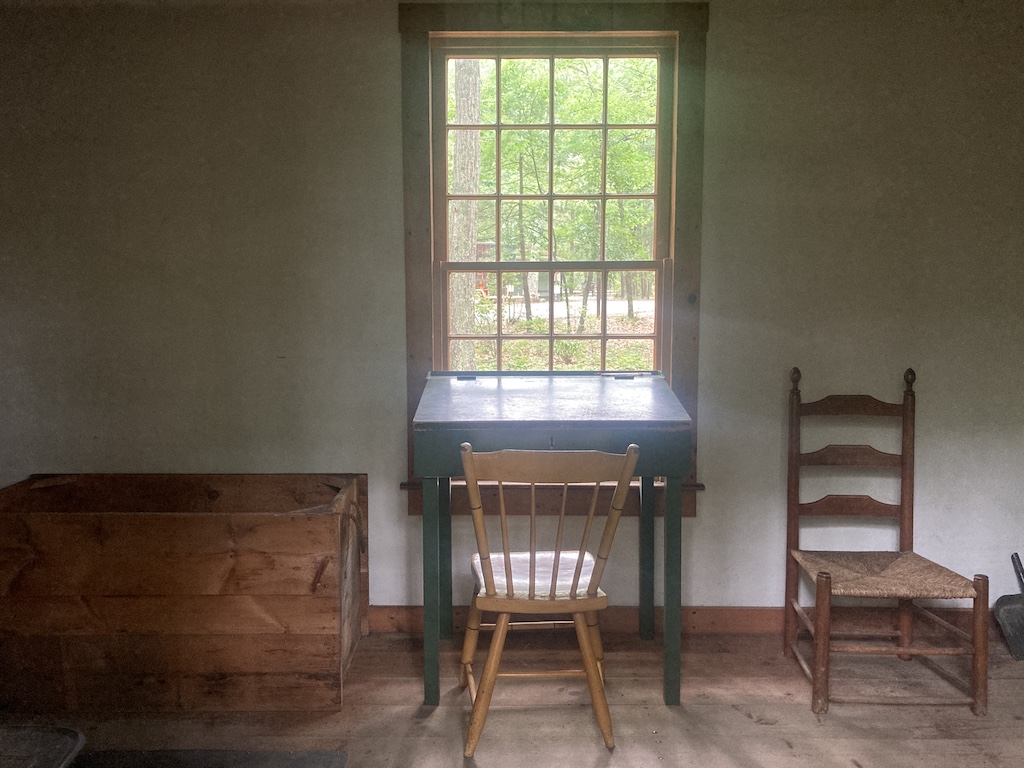 Rather than focusing on money and possessions, he was able to focus on nature and his creative arts that flowed from within himself. Since he was a poet, essayist, and philosopher, this was a natural fit for him.

When you arrive to the pond, you will encounter a fairly nice beach. People do swim in the pond, or kayak on it. Mid-week, it didn’t appear to be too crowded, but with Covid-19, you may want to consider hiking a ways and see if you can find a smaller beach that is unoccupied.

The trail is a 1.7 mile circular loop that is quite flat and pleasant. 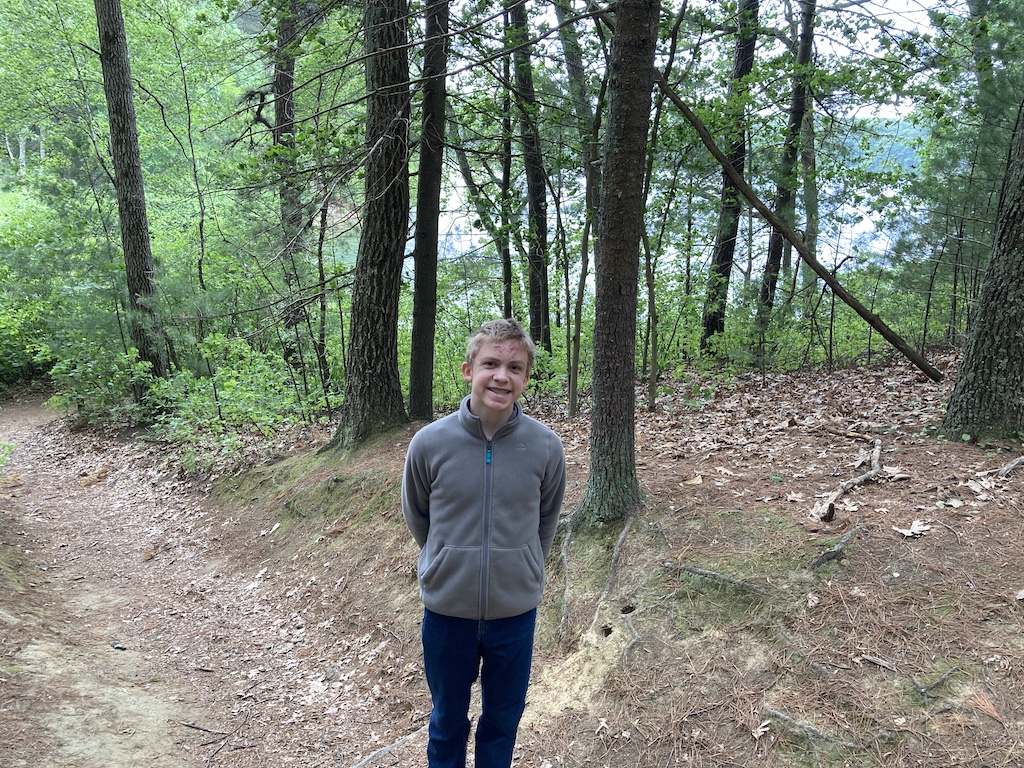 At present, there are signs that require one-way traffic, but we encountered one couple that was going the wrong way. Grumble, grumble. Parts of the trail are narrow and surrounded by brush that could contain deer ticks, so you have a choice of either ignoring social distancing or putting yourself at risk of lyme disease. Follow the rules, people!

At about the halfway point, you will encounter the site of Thoreau’s cabin. All that is left are some stones that mark the outline, but if you saw the replica near the parking lot, you can get a good feeling for what it might have looked like. 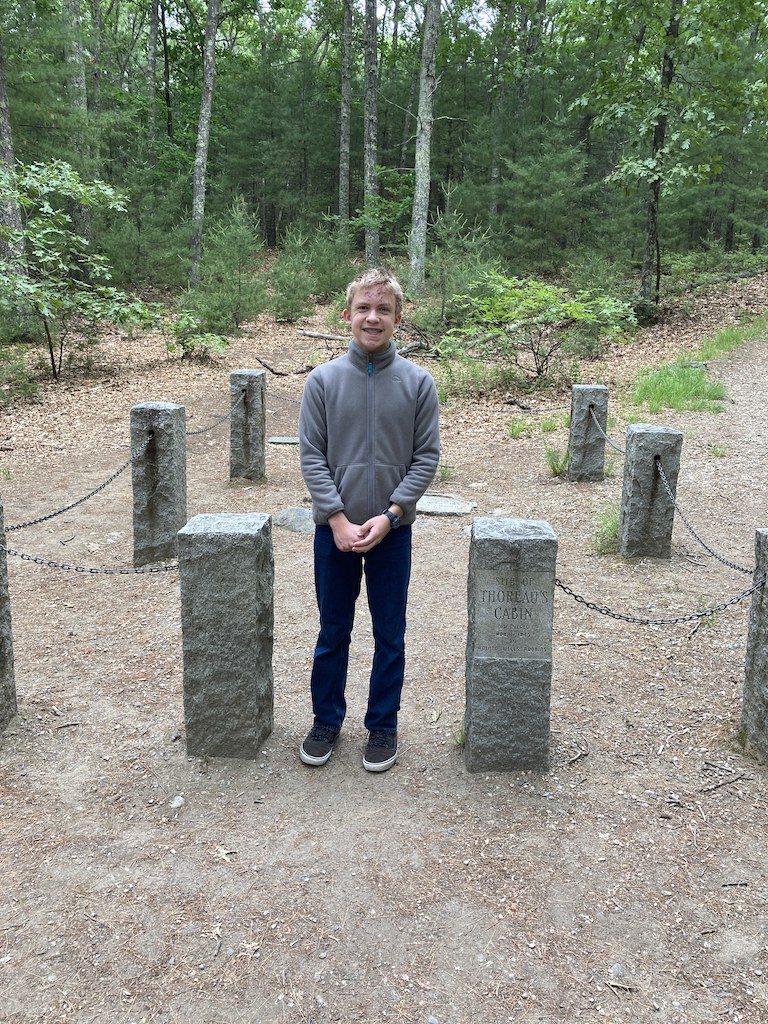 Nearby is a sign that portrays a famous quote from Thoreau’s book:

James and I spent a while discussing the meaning. Walden Pond really is an interesting place to ponder the meaning of living simply and to feel at peace with nature.

Once you get to this point in the hike, there are quite a few small beaches. 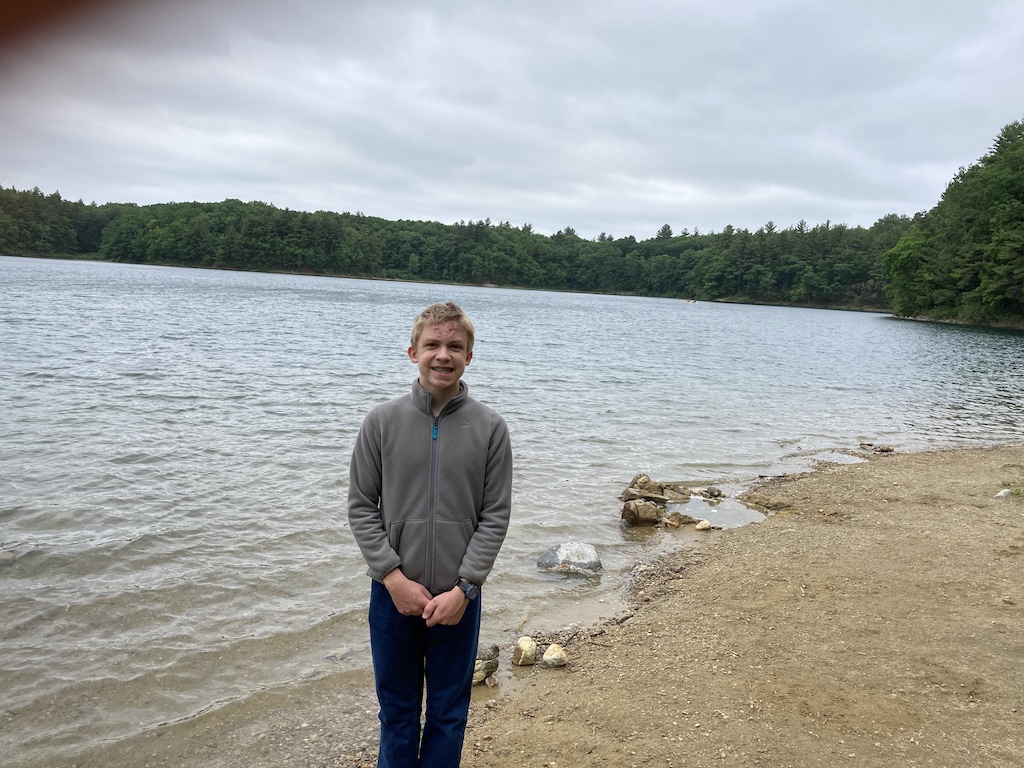 A little while later, we were walking by the train tracks and were delighted when the commuter rail meandered by. 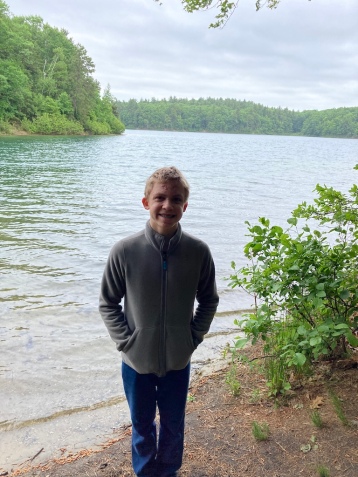 As you wind around the pond, you will encounter many beautiful views, as well as some birds, chipmunks, and other wildlife.

It is quite lovely, and eventually you will find your way back to the main beach near the parking lot.