This summer we’ve been exploring our [new again] home state of Massachusetts. For part of this, Jeremy biked from Boston to Cape Cod over the course of three days. James and I dropped Jeremy off at each day’s starting point, and spent each respective day exploring part of the Cape.

Not only is Cape Cod a famous summer vacation spot, but it is a site of important American history. My last post ended in Plymouth, the site of the first Pilgrim plantation. In this post, James and I spend one day at Sandy Neck Beach in West Barnstable, and one day at Race Point Beach in Provincetown.

When Jeremy decided that he was going to bike from Plymouth to Dennis – and maybe further, James and I started looking at what we could do while we waited for him. With Covid-19 in full swing, our guidebook’s suggestions of museums, house visits, and antique stores did not look appealing.

So, James and I started looking at the map for beaches. I was eying the small beaches near Dennis to make it easy for Jeremy to meet us, but James had his heart set on the much longer Sandy Neck Beach in West Barnstable, so I went with it, knowing that timing on picking Jeremy up might be a bit trickier since James would need to change out of his suit and we would need to drive at least 30 more minutes.

As it turns out, the beach was wonderful! Beautiful, clear water, a really long and shallow sandbar, an abundance of beach front, and some really pretty rocks to admire.

Sandy Neck Beach is located on the bay side of the cape, in the town of Barnstable. One surprise was the shark warning sign at the entrance to the beach. Most important take away seemed to be to avoid swimming near seals!

Parking costs $25, and there’s not a good way to avoid it with street parking. Even if you did manage to find something, you would still need to purchase a day pass to get on the beach.

The facilities included bathrooms, changing rooms, a concession stand, and a couple of lifeguards. That said, we avoided the changing areas; we’d ordered a pop-up privacy tent on Amazon that hadn’t quite arrived yet, but we made do.

After parking, I set up the beach chairs and umbrella while James ran off to test the water. I came down to join him and when I looked back, to my horror, I saw our umbrella tumbling across the beach. As I took off running, I spotted a life guard also running towards me and the umbrella, both of us reaching it at the same time, and before it made it to any of the other groups on the beach. 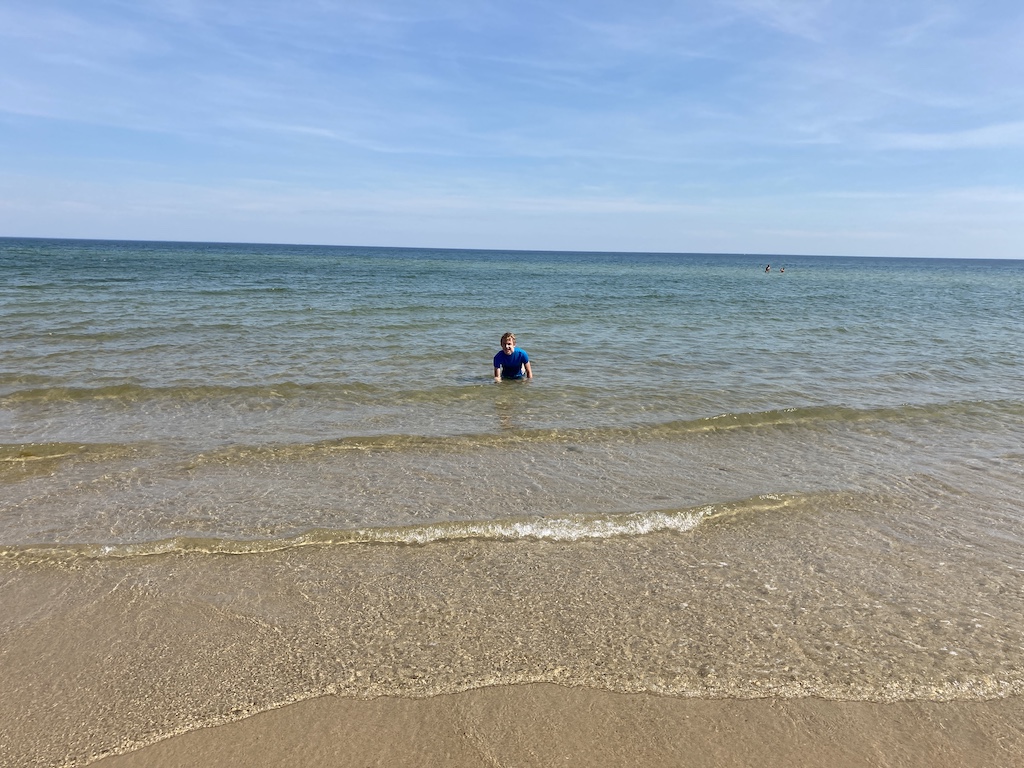 This time, I put the umbrella in a little further, but the rocky ground made it difficult, so I tied it to a chair and made sure the top was down when no one was sitting in the chair. Whew, disaster averted.

At this point I joined James in the water. The water felt much cooler than my memory remembered, but maybe it was just because it was 10:00am. Fortunately, the hot sun mitigated the problem and the water felt fine after a few minutes.

James and I were chest deep in the water when we saw someone a lot further out than us who was knee deep. Feeling curious we went to investigate and found there was a lengthy sand bar that made the water quite shallow. Not only was it fun to explore, but the shallower water was also a bit warmer.

From here, James alternated between playing in the water and building sand castles.

When I had stuck the umbrella into the ground, I had noticed that the water table was quite high in comparison to most of California’s beaches. Then we noticed that at one point, a stream of water seemed to appear from nowhere out of the sand and flow back towards the bay.

James was intrigued and decided to build a dam. At some beaches I worry about the cleanliness of fresh water on the beach, but being reasonably sure that the water was simply high tide run off oozing out of super fine sand, I decided to go ahead and let James play in it. 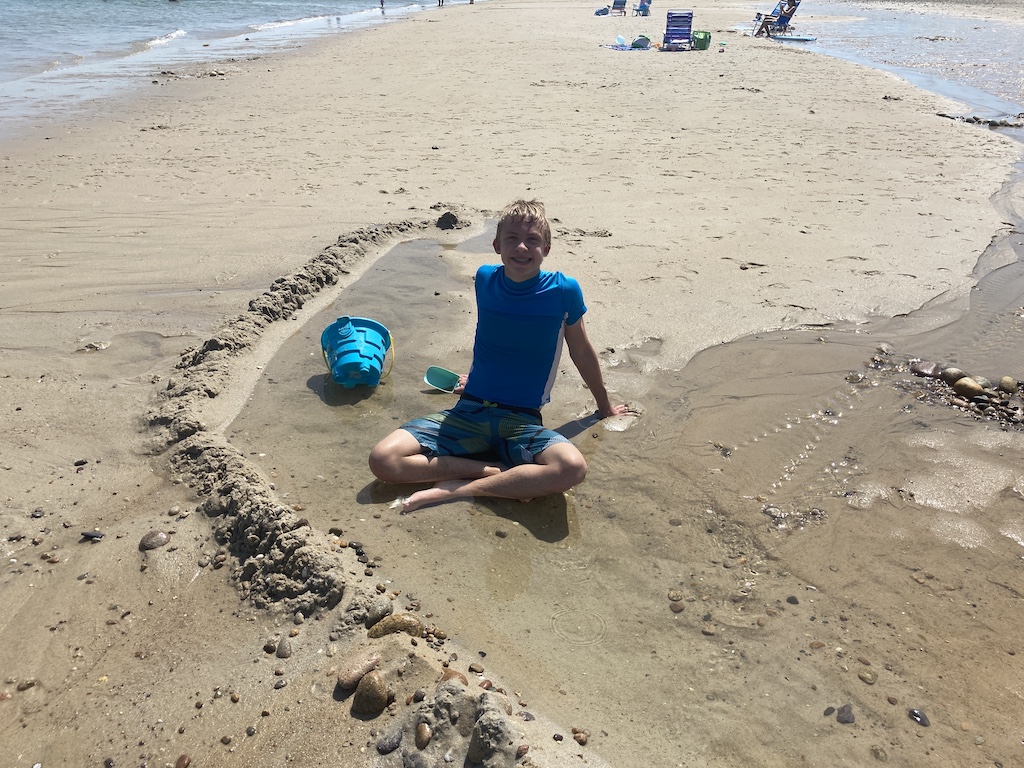 He had an amazing time! When Jeremy heard about how much fun James was having, he decided to extend his bike ride a bit and end in Brewster rather than Dennis.

James was pleased, so I went up to the concession stand to get lunch while he played with his dam.

As he dug in the sand, he turned up quite a few interesting looking rocks. His favorite were the pure white ones, but the purples and greens were also quite nice. 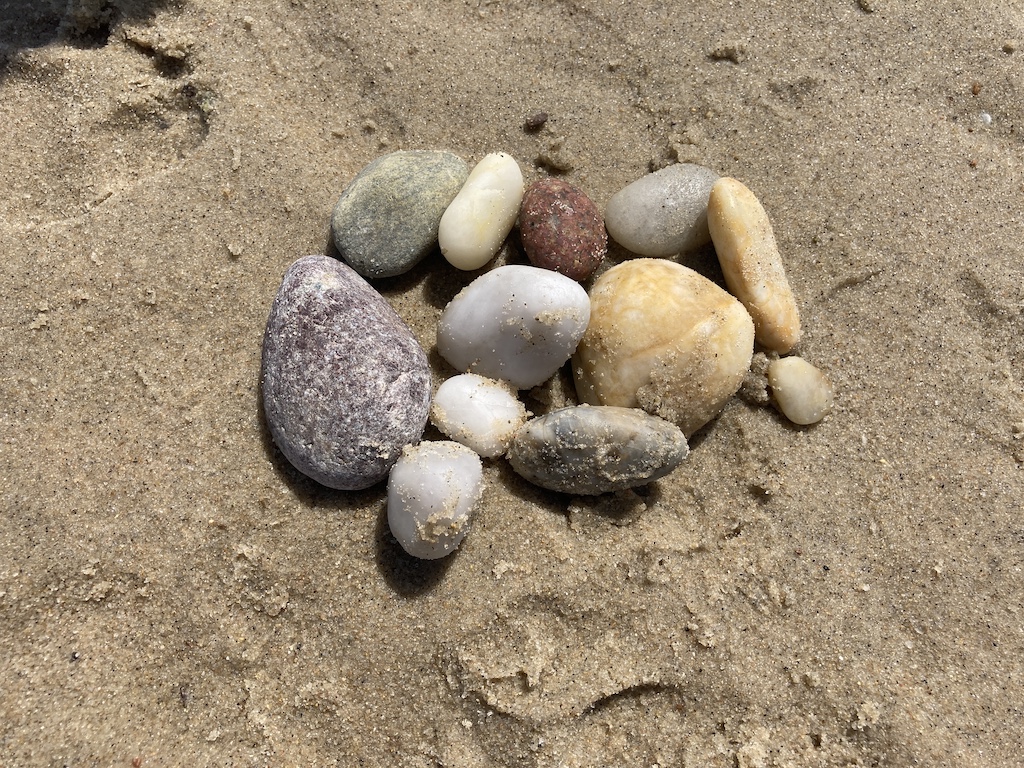 Meeting Up With Jeremy

A little bit later, we got the call from Jeremy saying that he was about an hour from Brewster, so we packed up, had James change into dry clothes, and got into the car.

We ended up meeting up with Jeremy in Dennis after his bike ride. While it could have been fun to explore the area more, Jeremy had biked 46 miles on a very warm July day and was feeling a bit tired, so we called it a day.

After a rest day, Jeremy decided that we would finish his quest to bike from Boston to the tip of Cape Cod. Looking at the map between Brewster and Provincetown, we noticed that Race Point Beach was literally right next to the Provincetown Municipal Airport and about as close to the tip as you can bike. With James’ love of airports, and my desire to not have to track Jeremy down by car, we decided it would be perfect! 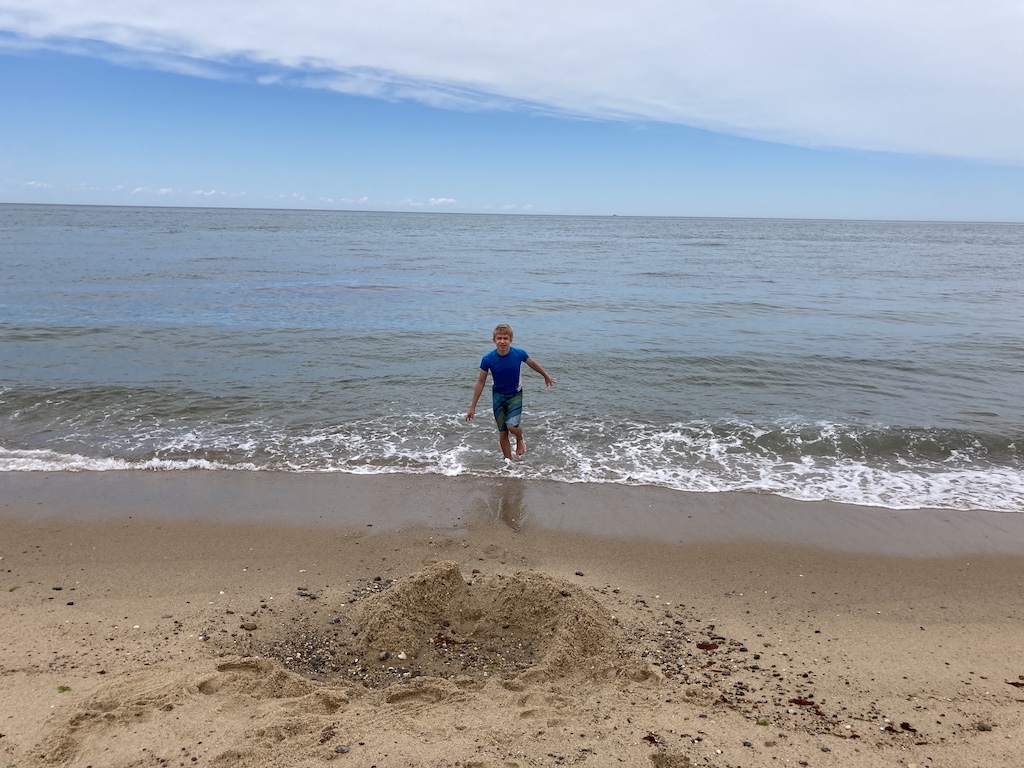 On research, I saw a comment that it was a popular surfing so I figured James would have fun playing in the waves, and that he was a strong enough swimmer to handle a surfing beach. Unfortunately, on arrival, we discovered that that the surf was quite tame and there wasn’t a surfer in sight. To make matters worse, Covid-19 has severely curtailed flights and we only saw a couple of airplanes the entire time we were there. Still fun, but this was about as big as the waves got: 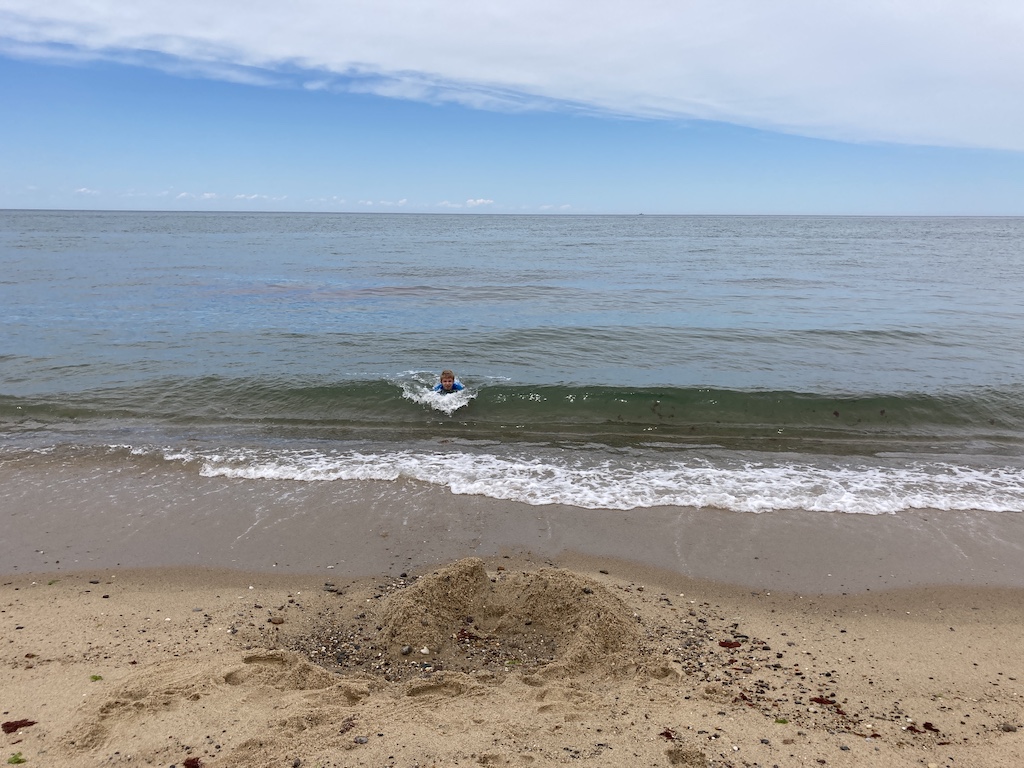 Parking was $25, but it is also covered by a Cape Cod National Seashore Pass or a National Parks Pass. I noticed there was a separate biking fee, but when I asked the woman at the booth if Jeremy would need to pay an additional $10 bike fee if he planned to park his bike on our car, I was told that he could simply bike on through to the parking lot without paying.

It was still early, so the crowds were pretty minimal, but we knew that wouldn’t stay the same, so we found a spot to set up where we thought we would be safe from germs. 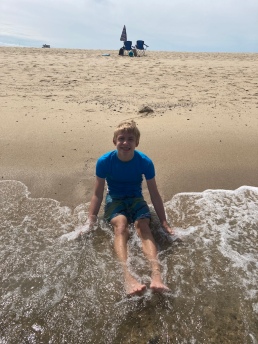 James ran down to the water and discovered that the water was quite a bit colder than at Sandy Neck Beach, although I think it was simply the difference between a steeper drop off (Race Point) and very shallow water that could be easily warmed by the sun (Sandy Neck).

Once he decided that he was too cold to play in the water, we decided to take a walk down the beach. After about 50 yards, we realized that the sand was way too rocky to continue without shoes, so we came back to get them, then set out again.

As we walked, we found a lot of really cool stones. James’ favorites were the pure white and translucent rocks.

We thought about walking to the lighthouse, but neither of us were getting cell phone reception and I couldn’t remember how far it was, so after a while we decided to turn back. As it turns out, it would have been a 3.5 mile round trip walk, which would have required a bit more planning to make sure we made it back in time and didn’t run out of water. 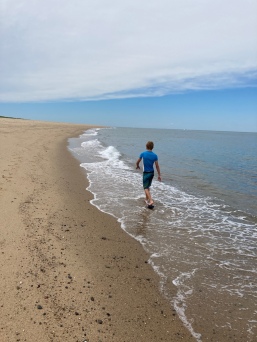 On our return, James built a sandcastle while I got bit by a zillion flies (probably either greenheads or horseflies). 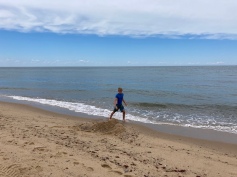 This beach did not have a concession stand, but fortunately we had brought a picnic. 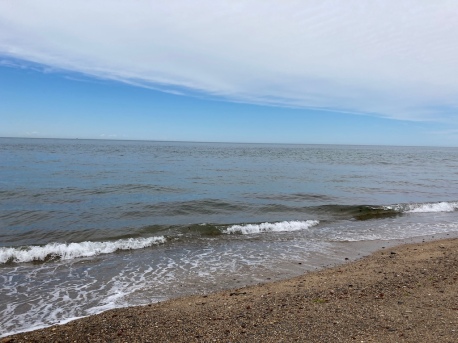 Once James started spending more time on the sand, he was bothered a bit more by the flies and didn’t want to stay much longer. Jeremy was still a ways away, so we decided to clean up and go visit the airport, which is right behind the beach. 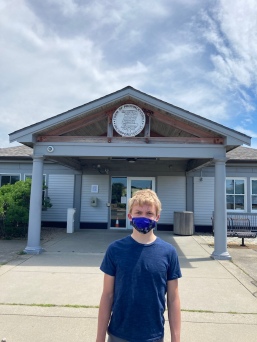 What a happy boy! He has done a lot of reading about Cape Air, and was delighted to see one of the main airports that they fly into. This one was a winner for smallest airport that James has ever visited. He was fascinated by the tiny area behind security.

The visit was fairly quick, given the airport’s small size and our being the only people besides employees in the airport, so we decided to head back to the beach and wait for Jeremy’s arrival by bike.  That said, Jeremy pulled into the parking lot about 1-2 minutes after us, having completed his 3-day bike ride from Boston to Provincetown. Perfect timing!

What a fun day!