This series of posts covers our trip to India roughly 9 months ago, just before we started this blog.

Continuing on with a look back in time, our trip to India didn’t actually start with India. Instead, we had an overnight layover in Munich.  Given that India is about as far away from California as you can get, most options are either flying through somewhere in Europe, or somewhere in Asia.  After looking at flight prices, we chose to overnight in Munich (though, for instance, Korea was an option as well), which was fine because it helped break up our trip. To allow us to have enough time to see the city, we had the airline check our bags all the way through to Delhi, and simply put a few essential items in our backpacks.

It was slightly unfortunate that it was January.  In both California and India, there was no need for anything remotely wintery.  Munich was another story.  I ended up putting several layers of sweaters and jackets, plus some hats and lightweight cloth gloves, into the backpacks.  We would probably be slightly on the cold side, but for one night, I didn’t want to bring more.  The boys whined about “overpacking mom,” filling up their bags with unnecessary things, but then once they got outside, they realized in the cold that I really had slightly under-packed.  Sigh.

The flight wasn’t particularly pleasant.  Lufthansa normally is usually fairly good, so I had high expectations, but upon boarding the A340, we realized that the seats were quite packed together.  If I wouldn’t have know better, I would have guessed it was a domestic flight.  International flights usually do a bit better with legroom.  At least they had some decent Riesling to make up for it a bit.  And 11+ straight hours of TV always makes the boys happy. 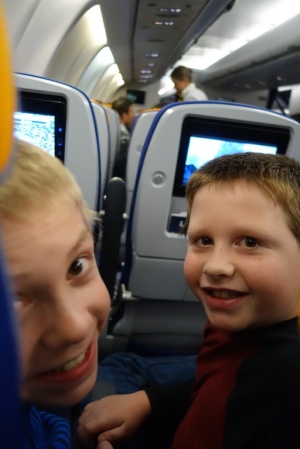 Once you arrive, the next most important thing is to change your meal times to the new time zones.  If you arrive at meal time, go ahead and eat if you are hungry.  But if it isn’t a meal time, you have to make yourself wait to eat until the proper time.  This helps set your internal body clock.  Really intense people start shifting their meal schedule and sleep times a few days before leaving, but we do this at most the night before.

Another thing worth trying is to take some melatonin about 30 minutes before intended bedtime.  Melatonin is a hormone made by your body when it thinks it is almost bedtime and makes you sleepy.  Unfortunately, with jet lag, your body is making it at the wrong time and you are less likely to feel the need to sleep at the appropriate time.  Until your body catches up with your location, taking a melatonin tablet can be very helpful.  Just don’t take one if you are planning to drive within the next 4-6 hours.  For example, don’t take one to help you sleep on the plane, then get off and rent a car.

On arrival in Munich, we simply had to go through passport control, and since our bags were checked through, we made it out of the airport very quickly.  We caught the next train and 45 minutes later we took a 5 minute walk to the City Apart Hotel München.  The boys were on a couch, and for some reason there weren’t any sheets for us, but as soon as we had that straightened out, we left to explore the city.

I love Munich!  If we were ever to consider moving abroad for a year, this city would be high on my list.  The downtown has a nice pedestrian area with lots of shops and restaurants.  After wandering by some delicious smelling sausage stands that we weren’t hungry for, we stopped at a bakery for dinner.  Our intent was to sit but since closing time was in 10 minutes, they told us we could only take things to go.  I got a delicious ham and cheese sandwich on ciabatta.  Jeremy and James got donuts, and John got a puff pastry wrapped sausage that let off a wonderful aroma as we continued our walk.  Everyone was a bit sad to remove gloves, but nobody got frostbite. 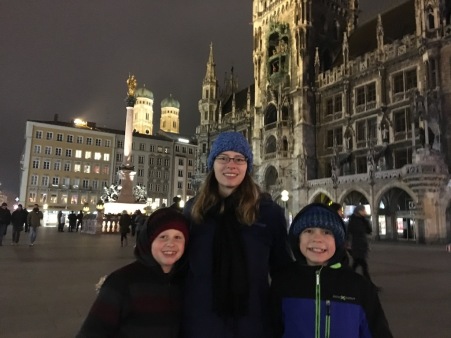 As we continued, we saw an ice skating rink that looked like a lot of fun.  Every year in San Jose, California, the city sets up Christmas in the Park.  Yes, you can ice skate around the palm trees in fairly warm whether, but you have to avoid all the puddles and fallen bodies – very few people in California can skate well.  On the other hand, this rink in Munich was the complete opposite.  Nice polar bear statues, very talented skaters, and not a puddle in sight.

The boys were exhausted, so we took them back to the hotel for bed, then Jeremy went out to wander some more.

By 3:00am, the boys were wide awake.  I could have slept longer, but with the two of them pestering each other, there was no sleep for the adults in the room, so at 4:00am, we had them complete some of their school work.  That made them think twice about why they should have let me sleep.  It also highlighted why we usually like to get at least a 1-bedroom apartment when we travel.  A door between you and the kids is always preferable.

At 6:00am, we decided that there may be at least one bakery open, so we decided to venture out.  Everything was fairly silent, with the exception of a few partiers that were still partying.  The boys were a bit confused about why people would be going to a party so early in the morning, and were even more confused about why it would be fun to stay up that late.  Isn’t innocence precious?

We did have a fairly good walk though, exploring the outside of the city sites in the winter morning dark.

At 7:30am, one of the bakeries near the Karlsplatz station finally opened, so we popped in there.  I landed a delicious croissant filled with a chocolate nut cream.  I also got what I thought was a cheese filled pastry, but it turned out to have a sausage in the middle.  Oh well.  John’s cherry strudel was quite nice.  On the other hand, James’ donut was one of the worst he has ever had.  I guess that’s what he gets for trying to get American food in a place that has some of the best bread and pastries.

After a short walk, we headed back to the hotel to pick up our stuff, then made the train journey back to the airport. 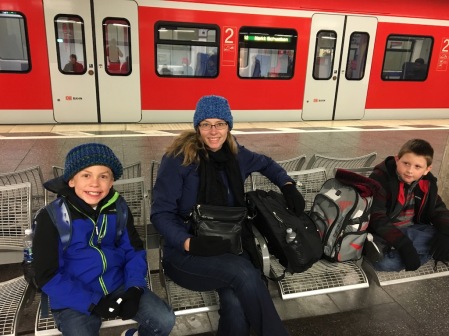 Not a super eventful time in Munich, but very pleasant, and much better than staying in a hotel a bit closer to the airport.  Now, on to India!