The German Rhineland follows the Rhine River, is beautifully green and peaceful, plus castles from the feudal days line the river.  Add in super cute towns and villages, and you have one of my favorite areas in Germany.  It’s too bad we are only spending 2 days here, rather than 2 weeks.

After a 3 hour flight from Kiev, Ukraine to Düsseldorf, Germany, we picked up a rental car and drove about 45 minutes to Köln (Cologne).  Jeremy was a bit rusty on driving a manual, so I felt a bit ill by the time we arrived at our hotel around 3:00.  After several weeks in apartments, a hotel feels a bit cramped, but it is nice and modern.

Since we arrived with only an hour and a half before the Cologne Cathedral closed, we beelined there after dropping off our bags.  With the Gothic peaks jutting into the air, the first sight of the full building was quite awe inspiring.  From this outside view, you can definitely see why it might be the most visited cathedral in Germany.

As you walk around the cathedral, you start to notice the somewhat scary gargoyles peering down at you.  Creepy! 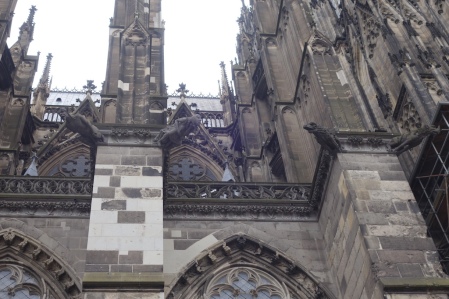 When I went inside, I was struck with how small I felt.  I guess that is probably the point, but I didn’t particularly like it.  The columns feel like someone came down and stretched them up.  When you sit in the middle, the statues lining the pews feel a bit like you are in a courtroom being judged.  Stylistically, I definitely prefer some of the churches we saw earlier in the trip, e.g. the Gothic-styled Duomo in Milan, but this one is quite impressive in how it shows the power and mightiness of God.  I think Jeremy saw this side more than the cold, empty side that I saw, and he ended up really liking the cathedral.

Other than the very beautiful stained glass, the cathedral was quite spartan in its decor.  For us, this was particularly emphasized since we just spent a lot of time in the very ornate orthodox cathedrals of Ukraine. 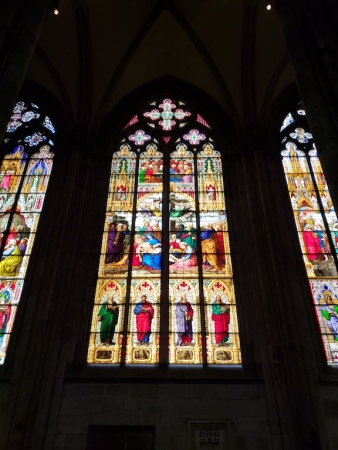 After leaving the church, we picked up some amazing bakery items a few shops away.  I got a boat shaped puff pastry, filled with a custard cream, and topped with strawberries.  Yum!  The bakeries are really one of the best parts of eating in Germany.

We did the Rick Steves walking tour of Cologne, which was quite quick since it was Monday and all the museums were closed.  The bridge with zillions of love locks was very pretty and fun to hang out on for a while.  Maybe Jeremy and I should buy a lock and add it to the bridge.  On the other hand, the weight of the locks is quite impressive and every time a train went by the bridge felt less and less stable.  It brings to mind the nursery rhyme about bridges falling down.

On our way back to our hotel, we stopped at a nice grocery store on the main, pedestrian only, shopping street where I picked up a nice salad for dinner.  We got back to the hotel fairly early and decided to spend the evening resting, since we were quite exhausted.  If we had another day or two, there could be a lot of interesting museums to visit, but given the number of museums we just saw in Ukraine, the boys aren’t sad that we are just relaxing.

The best part of staying in a hotel are the breakfasts.  It was really nice to have all of the food groups available to us and to have a selection of both hot and cold foods. John asked what German breakfasts look like, and was shocked when my answer was sandwiches and soft boiled eggs.  At first, he was very grumpy with the idea of sandwiches and runny yolks, but when he saw the panini press, he got very excited about making himself a grilled cheese sandwich.  My memory from traveling in Germany is that all the breakfast buffets had soft boiled eggs, so you can imagine my disappointment when I discovered that mine was hard boiled.  Still fine, but on the other hand, my puff pastry cinnamon roll was delightful.  Perfectly flaky, not too sweet, delicious!

After breakfast we hopped in the car and drove just under 2 hours to Bacharach.  If you like staying in hostels, the castle on the hill has been converted into one. 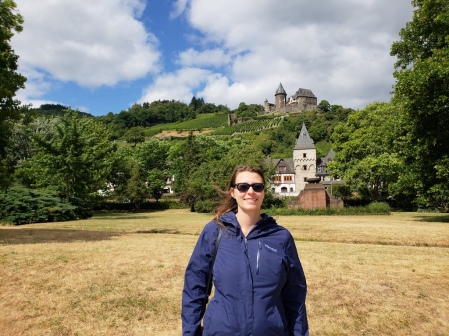 On arrival, we saw the KD Ferry was just leaving, so we took the kids to the playground for a while, got a snack, and enjoyed the river view until the next ferry was ready to leave.

The ferry was quite nice.  The top level was a bit windy, so we got a table on the lower floor and enjoyed the views from the elegantly decorated dining room with pristine glass windows.  As we floated along, we saw quite a few castles, one of which was on an island in the middle of the river.  This area was known for the “robber barons” that would block the river and not allow boats to pass until they had paid a “toll.” 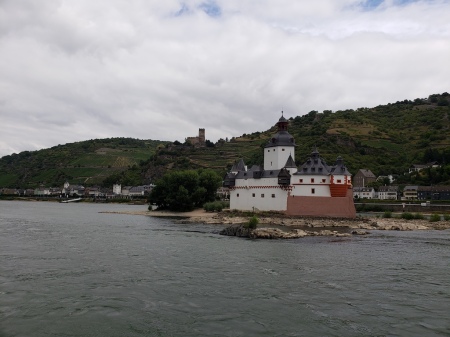 About 50 minutes later, we arrived in St. Goar.  The guide book recommended seeing the Rheinfels Castle, but since we were just in places like Pompeii and Egypt, seeing ruins wasn’t high on our list.  Some of the other castles seemed interesting as well, but we have simply seen too many museums in the last few weeks, and decided to enjoy the river and cute towns instead.

After disembarkment, we scoped out the town and decided on the Hotel am Markt restaurant.  It had amazing views of both the castle and the river, as well as a menu that everyone agreed on.  Pork in Germany and Austria has been amazing.  Usually it is one of my least favorite meats, but they seem to cook it correctly here.  It is tender and juicy with lovely seasoning.  The kids didn’t like their sauerkraut, so Jeremy and I traded away our salad to get some.  They did like their bratwursts, though. 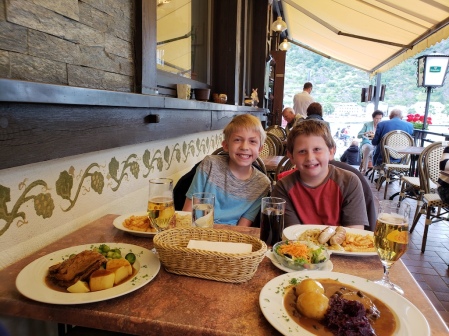 We wandered the town a bit, enjoying the beer steins and cuckoo clocks while window shopping.

Then we found a nice spot to sit by the river and enjoy the scenery.

We hopped on the next ferry back to Bacharach and enjoyed some ice cream and coffee. 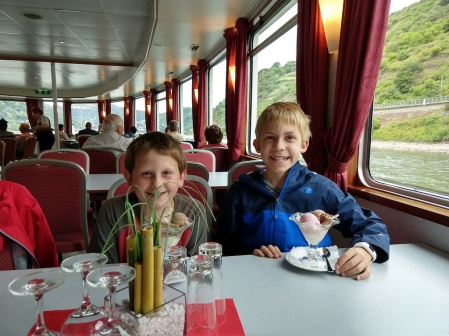 It was a bit slower going upstream, but was warmer than in the morning, so we decided to spend some time upstairs.  There was a nice playground for the kids with a slide and a few of the bouncy animals on large springs. 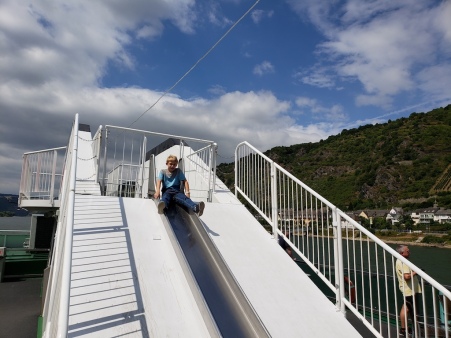 They had fun there, while Jeremy and I spent some time talking about what we are going to do when we end our crazy travel adventure and return to regular life.

Definitely a fun excursion.  The train only takes 10 minutes, but the hour-long ferry is really peaceful. If we had more time, biking along the river paths would be a neat idea to try too. 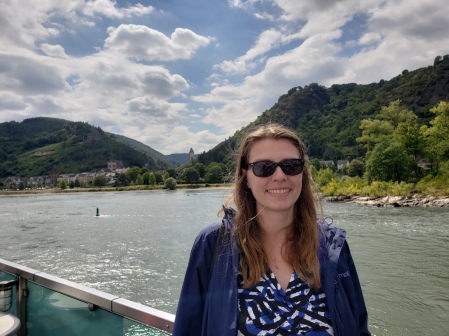 It was time for checkin, so we walked to our hotel and got our attic room, which was at the top of an endless set of stairs.  Luckily Jeremy offered to carry the suitcases up.  I felt a bit bad, but he seemed happy to do it.  We have a nice view of the river, and are extremely close to the train tracks, but fortunately we always travel with ear plugs.  The only question is whether or not the vibrations will wake us.

Our hotel was actually part of the original city walls, so we didn’t have to walk far to get on top of them and enjoy more river views.  When the walls hit a dead end, we detoured into the super cute town and wandered a bit.  James is obsessed with gummy bear candies, and has been thrilled that Haribo originated in Bonn, just 1.5 hours from where we are staying.  Passing the grocery store, we decided to indulge him and he was excited when he saw not one, not two, but three shelves of different varieties of Haribo gummy candies.  John, on the other hand, was enchanted with the baskets of delicious looking raspberries and declared that he never wants candy again since raspberries are so much better.  How can you say no to that?

We wandered around, and saw some hiking trails that looked amazing.  If we were here another day, we would definitely consider some of them.  The boys wanted to return to the park, so we headed that direction, picking up some dinner from a bakery on the way.  My rhubarb pastry was fabulous.  The best German bakeries that I have eaten at in America would go out of business if they were transported to Germany.  There is simply no comparison.  The bakeries here are awesome.

The boys played in the park, while Jeremy and I enjoyed a recliner bench.  Soaking in the river and castle views have really refreshed me after an exhausting couple of weeks.  Sure, we could have done a lot more here.  We could have chased around, seen a ton of castles, and gone to more towns, but we were really happy with what we saw.  Sometimes less is more. 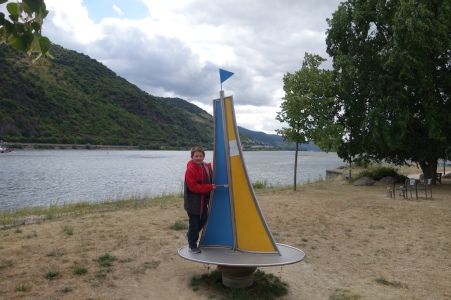 Given that our room would shake every time a train went by, we all slept better than expected.  In the morning we enjoyed a nice breakfast, then headed out for Baden-Baden! 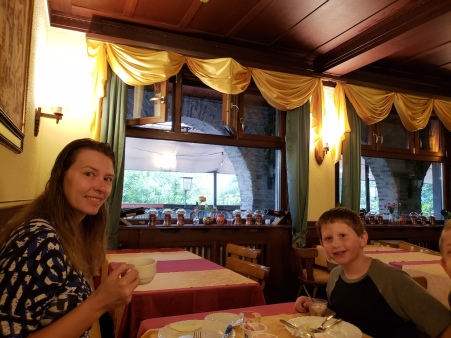