Japan is one of my favorite countries to visit.  The food alone makes it wonderful, but add in the gardens, the history, the feel of the various cities, and the cleanliness, and you have an all the parts of an amazing family vacation.  We have been there several times, and each time it has never failed to delight us. 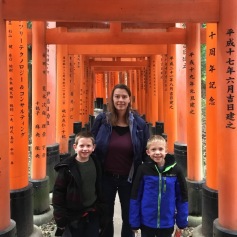 To include the major cities of Tokyo, Kyoto, and Nara, our itinerary looked like this:

The main takeaways are:

A flight to Tokyo from the United States is going to take at least a day.  With a minimum of 9 hours of flying time, the time it takes to get to the airport and check in, plus an 14-17 hour time change, and you will lose a full day.  Add in a layover or two, and it could easily be more.  But, on the way home, there is a good chance that you will arrive home before you took off.  The weirdest is if you leave Japan after shortly after midnight, you may arrive home the evening of the day before.  It makes a good story.

We arrived at one of Tokyo’s airports in the afternoon.  Note that there are two airports in Tokyo.  The Narita Airport is further out, but may have more flights from the US.  The Haneda Airport is closer to downtown, but since it is mostly a domestic terminal, there are fewer flights.

After getting through passport control, picking up our bags, and clearing customs, we found our way to the Japan Rail (JR) office at the train station and used our pre-purchased exchange order to pick up rail passes and made our way to the Tokyo Airbnb apartment that we had reserved.

On arrival, we dropped off our bags and headed out for a fun evening in Shinjuku.  The  visual stimulation really helped the kids stay awake so that we would have fewer problems with jet-lag.  We wandered a bit, picked up some noodles for dinner, and mostly just enjoyed the atmosphere. 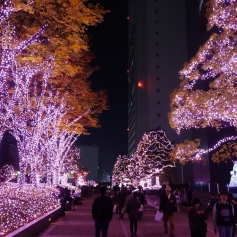 Since we knew that jet-lag would be an issue, this was an ideal time to go to the Tsukiji Fish Market (closed in 2018) for an early morning sushi breakfast.  We spent some time wandering through both the working areas and the tourist shopping areas, then selected a delicious looking restaurant that didn’t have too long of a line.  If you are serious about sushi, pick the restaurant with the longest line, and you are likely to be very happy with the quality. 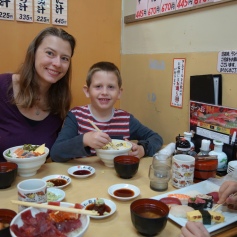 Upon leaving, we briefly stopped by the Hama-rikyu Gardens, which are very pleasant and also have nice views of the city.  Next up was Asakusa, which has both the Sensoji Temple and a really fun market area.  Continuing on to Akihabara Electric Town, we were a bit disappointed when we were surprised by the lack of kid friendly electronics. 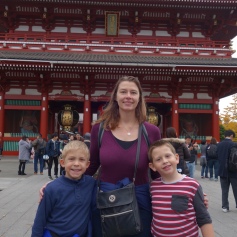 The controversial Yushukan War Memorial Museum was next.  All at the same time, it was fascinating (a lot of detailed coverage of things more relevant to Japan), horrifying (the perspective of WWII and other local wars was more than a bit off), and delightful to the kids (it had numerous very well done displays).  On leaving, we took a walk by the Imperial Palace and headed back to the apartment, making sure to stop at delicious vending machines all throughout the day.  I drank way too much hot milk tea, but I figured that I was burning enough calories, that it really didn’t matter. 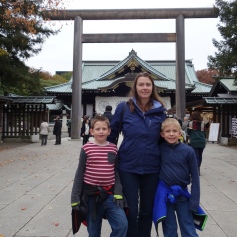 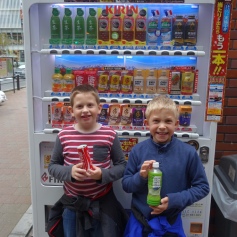 It was a very full day, but our experience has shown that a way too full first day will stave off jet-lag issues and make the rest of the trip much more pleasant.  If you are walking, you can’t be sleeping!

Today, we decided to start with the National Museum.  Very fun!  John, in particular, loved the coverage of Ninjas and Samurais.  On the way, we saw a few shrines and stopped at the nearby park. 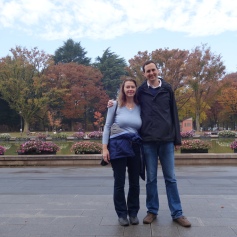 Next was the Tokyo Tower, which was much more fun than I thought it would be.  Jeremy and James really like towers, but despite my resistance, the views really were quite impressive.

We had lunch in Shinjuku, dinner in Harajuku, and spent the afternoon in Shibuya.  All three are busy areas of Tokyo, but have a slightly different feel.  Shinjuku and Shibuya are considered two of Tokyos best districts, have busy train stations, and have a ton of shopping, entertainment, and food options.  Shinjuku has more people transferring through the train station, a bit higher end shopping, and a more intimate, lively, and visually stimulating nightlife feel.  Shibuya is a bit larger, has more variety in the shopping, and has more of a pop culture feel.  Harajuku shares some some of the same characteristics, but is a a bit more international, is considered a leading fashion district, and is popular with the local teenagers. 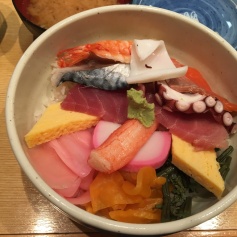 Our morning started with a train ride to Kyoto.  We requested the Mt. Fuji side of the train, but alas, the fog was so bad that it didn’t matter and nobody got a view of the mountain.  On arrival, we stored our bags in the main train station, and went out to see the city.

Our wanderings took us by the Kiyomizu Temple, as well as many other temples, pagodas, gardens, and other sights.  Since it was Japanese Thanksgiving, there were a lot of people out and about, wearing traditional Japanese dress.  Quite fun! 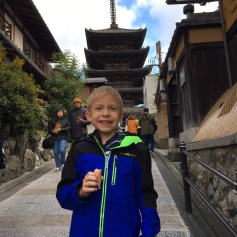 When we were done for the day, we picked up our bags and checked into our apartment.

Day 5: Kyoto with day trip to Inari and Nara

After getting ready for the day, we hopped on a local train to the Fushimi Inari Shrine, about a five minute ride from Kyoto’s main train station.  This is an amazing shrine that requires a somewhat lengthy hike to see it all.  We are fairly fast walkers, so even with a few stops to look around, we were able to complete it in about two hours.  Many people take quite a bit longer. 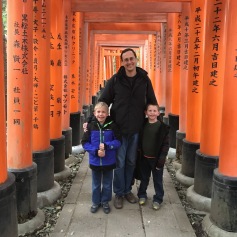 From here, we continued on to Nara.  On arrival we started with a stroll through Nara Park, allowing the kids to buy some deer crackers to feed the numerous deer.  Try to avoid buying the crackers near aggressive looking deer!  We continued on to downtown for lunch, then took a long walk that went by numerous temples, beautiful gardens, and more.  Stop by the TI and they can give you a city map and highlight the best path for you.

On our return to Kyoto, we stopped by the Nishiki Market, where we admired the food and picked up my favorite of octopus on a stick, as well as some mochi and other treats that caught our eye.  For dinner, we decided that there was no chance of a traditional Thanksgiving dinner, so we decided to gorge on sushi at a sushi boat restaurant!  Yum!

For day 6, we decided to take the long day trip to Hiroshima.  There is a really cool island, that you can take a ferry to, so we decided to split our time between the Hiroshima Peace Memorial Park and the island of Miyajima.

Since the tide schedule seemed to indicate that Miyajima would be best in the morning, we decided to go there first.  The floating Torii gate wasn’t quite floating, but it was still pretty cool.  The Itsukushima Shrine was quite extensive and fun to wander around.  Plus the boys loved that there were more deer, even if they weren’t the type that we were allowed to feed.  Before hopping back on the ferry, we got a delicious lunch that included Hiroshima’s famous oysters. 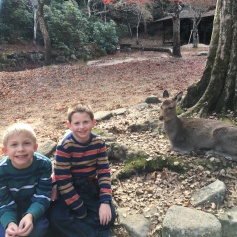 Upon returning to Hiroshima, we went straight to the Atomic Bomb Dome, which somehow survived the center of the blast.  Amazing!  We continued through the Peace Memorial Park and found it to be very overwhelming.  Once we reached the Memorial Museum, we decided to go ahead and go in, even though the boys were quite young for it.  With the exception of a really graphic wax display (parenting fail), we were able to shield them from the worst of it.  We tried to read as much as we could, but we also didn’t linger.  I would have loved to spend more time in there without kids.  It is incredibly intense and horrifying, but also very fascinating.  Reading about it in a book just isn’t the same. 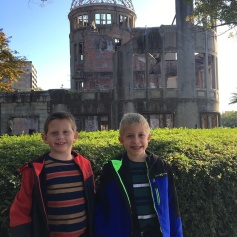 While waiting for the train, we spent a little time in Hiroshima’s vibrant downtown, where we contemplated the extreme destruction with the amazing rebuild.  After picking up dinner, we hopped on the long train back to Kyoto.

After two fairly long day trips, we decided to spend the day in Kyoto exploring the Nijo-jo Castle and the Imperial Palace.  The Nijo-jo Castle grounds are quite fun to wander around.  The boys and I pretended to be ninjas, defending the castle.  The interior was plain, but that is true of almost all Japanese buildings from that era. 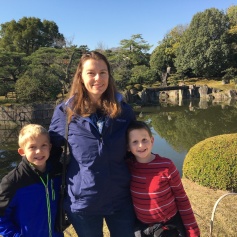 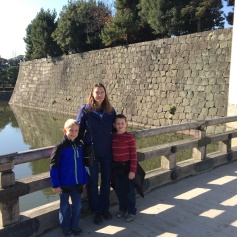 We continued on the Imperial Palace, where we were a little less impressed.  The size of the grounds were larger, but there was a lot more gravel and fewer gardens.  The interiors were a little nicer than anything we had seen up until this point, but it was interesting to ponder that even if you were an emperor, this was as good as life got. 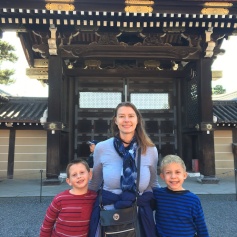 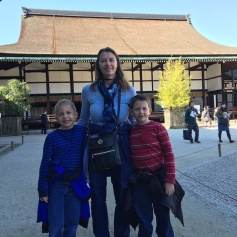 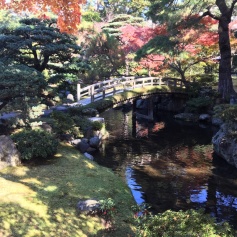 The afternoon was spent wandering around Gion, visiting parks, and enjoying the fall atmosphere.  For dinner, we enjoyed more sushi! 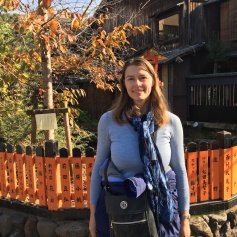 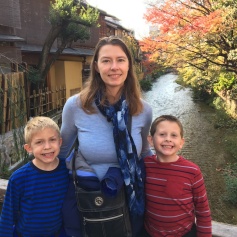 Our morning started with a train to Tokyo, where we were able to see Mt. Fuji. In the afternoon, we spent some time at the Imperial Palace Gardens, then headed over to Ginza to get a feel for modern Japanese life.  A TV crew even decided to interview us!  As our evening flight approached, we made our way to the airport, then flew home.  What a wonderful trip! 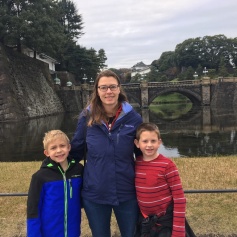 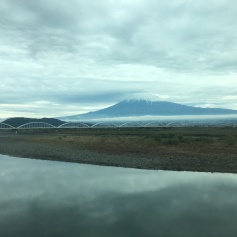