Living in California, I (Jeremy) had meant to bike parts of the coast here, but had never really gotten around to it. This was despite the fact that I spent many years bike commuting to work, so my legs should have been moderately prepped for it.

So, after biking in Europe a few months ago, I decided to try to make parts of it happen. Since we live in the Bay Area, the closest interesting segment to home was the San Francisco to Monterey segment. After buying a bike map, it seemed to make sense to break the route up into 3 segments, each of which were roughly 50 miles:

Given that each of the three starting points were about an hour drive from our place, this was relatively easy to do across a few scattered days this past fall. We made it a bit of a family endeavor as well – Jennifer and the kids drove the 2nd and 3rd segments ahead of me after dropping me off on various Saturdays, and spent the days at the beach and the Monterey Bay Aquarium, respectively. Maybe I’ll eventually finish the rest of the CA coast, but I’m happy to have taken the initial steps.

So, this post is going to be more about traveling near (from us), rather than traveling far, and split across two posts. If you can’t see the California coast, hopefully it inspires you to see the beautiful places near your home.

The route was very beautiful. And at times somewhat hilly and windy as well. I’m not awesome at climbing, and a few of the hills were some effort. All the guides recommend biking the CA coast from North to South given the prevailing winds, though you’ll naturally still find gusty headwinds in spots.

The route tracked Highway 1 in spots, but not exclusively. For instance, on the 3rd section, I was only on Highway 1 for about 5 out of 48 miles. And most of Highway 1 on this stretch had somewhat reasonable shoulders, albeit with a few slimmer spots. I used my Garmin Edge Explore bike GPS for most of the navigation, but occasionally I used my phone or my paper map to supplement it.

My favorite of the three sections was the first stretch from San Francisco, though I felt like the climb after Pacifica before the Lantos Tunnel was somewhat narrow to navigate. The third section had the least climbing (though the first half of it was less interesting), and the last 13 miles of it into Monterey had a nice casual bike trail, that I’d recommend for anybody.

Compared with my recent bike trip in Europe, it was just different. Biking in Netherlands is somewhat easier, fairly flat, and full of manicured bucolic scenery. The California coast meanwhile has a more wild, wind-in-your-hair feeling to it, with its own version of beauty as you climb and descend ocean cliffs. I’m glad I’ve seen some of both.

The natural start of a coastal ride from San Francisco is the Golden Gate Bridge. From the bridge to Half Moon Bay is roughly 42 miles. That said, to get there from our place, I took the commuter train into San Francisco. Since the train station is in the Southeast corner of the city, it was actually a 8 mile ride from the train around the bay to the bridge, getting me to just over 50 miles for the day.

The ride around the bay in San Francisco from the train station to the Golden Gate Bridge was quite nice, and I took a few pictures at the landmarks along the way. 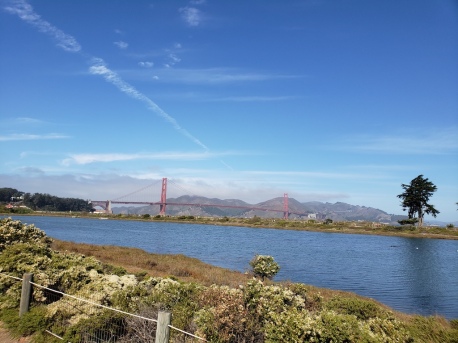 On that note, there were plenty of tourists on the route with rental bikes as well – a common route is from the pier, over the bridge to either Sausalito or Tiburon, and then taking a ferry back to the city. Jennifer rode with me on this route couple years ago, that stretch is a nice casual ride.

From the Golden Gate Bridge, I began the main route. It started with a beautiful ride through the Presidio. After an interlude through city streets, in continued as a beautiful, mostly-downhill ride through Golden Gate Park. Even if you don’t have the energy to bike further down the coast, this stretch through SF is quite dazzling on a nice (October) day. 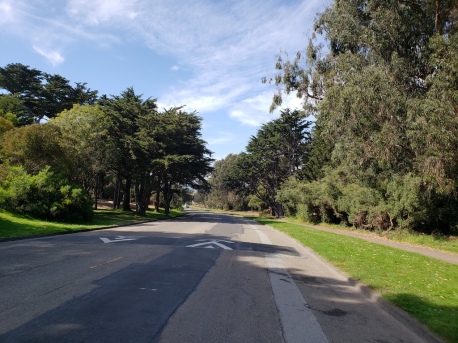 At that point, the route reached the ocean from Golden Gate Park. The GPS helped make all the navigation fairly effortless. From Ocean Beach, the ride went south along the ocean, and then went slightly inland by Lake Merced.

From there, the road transitioned from San Francisco to Daly City. Immediately, the road started going up a large hill. While the most direct route was Skyline Blvd, going one block west through the neighborhood was much nicer. I was more appreciative of the climb after I got to the top. From there, it was a steep ride back down, but quite enjoyable and scenic. Given the timing, I also grabbed a bite to eat along the way in Daly City. 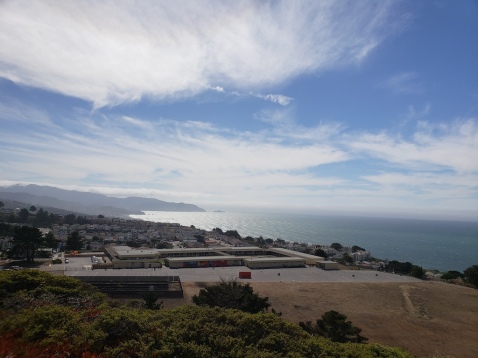 After that point, I kept biking on secondary roads west of Highway 1 through Daly City and part of Pacifica. One nice aspect about seeing on a bike is being able to quickly stop at the lookouts along the way. Eventually, the road merged onto Highway 1 in Pacifica. 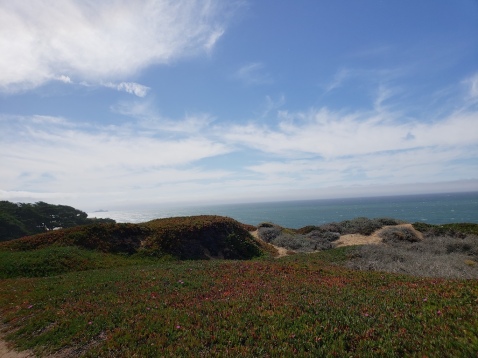 The initial Highway 1 stretch had a decently wide shoulder, and there were nice beach areas along the way. Then things started getting a little hairy just south of Pedro Point, with a steep incline, as the road got narrower, on the way to the Lantos Tunnel.

Since I wasn’t used to the combo of traffic + narrowness + climb, I [slightly lamely] briefly walked the bike during some of the stretch up to the tunnel. That said, once the road got close to the tunnel, there was a reasonably wide shoulder. The tunnel itself had a fine break-down lane to bike in, and it was downhill inside. I briefly had visions of the narrow tunnel scene from “Back of the Future II”, which were fortunately not accurate.

Once I got to the other side of the tunnel, most of the day’s climbing was done, and it was then a nice downhill stretch to the beaches and farms near Montara and Moss Beach. Since this was in October, there were plenty of pumpkins out in the fields. 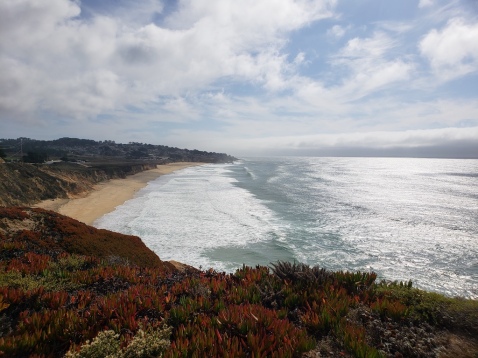 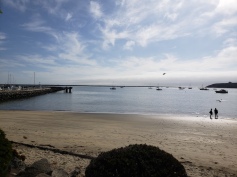 Even though I’ve driven the stretch on Highway 1 here plenty of times, I saw things here that I missed before, simply because it was easy to stop and look without having to park. And some of the route took smaller roads a block west of Highway 1.

Most of the remaining path to Half Moon Bay was relatively peaceful. There were a few smaller hills, but somewhat more tame compared with the Daly City one. Around El Granada, there was a proper bike path for the remaining stretch into Half Moon Bay, where there are far more recreational trails. 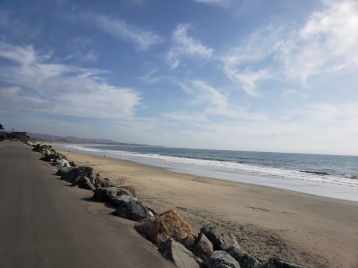 Having finished the first section to Half Moon Bay, I biked to the bus stop in town. The buses near the Bay Area have small bike racks in front, so waited briefly for the next 294 bus, which went over the hill to the Hillsdale train station. And from the train station, I rode the train the rest of the way home.