In the summer of 2017, we decided to take a family trip to France! How times flies – it felt like our previous trip to France with them, in 2012, was just yesterday. But in “kid years,” 5 years is quite a long time – it translates into the difference between pre-school and being much of the way through grade school.

In our previous 2012 trip, we’d spent 1 week in Paris and 1 week seeing areas in the south of France (3 days in Nice, 3 days in Avignon, 1 day in Aix). This time around, we decided to try some different regions. We wanted to go to the Loire region, to see Mont St. Michel and Normandy, and to see the alps region as well. To weave that together, our itinerary involved:

In retrospect, this was a fairly packed itinerary for 2.5 weeks, but given limited vacation time we had in 2017, we tried to make the most of it. Ideally, we would have spread out over more time, since there were a lot of neat things along the way!

The beginning of a trip is always James’ favorite day, since he’s an airplane fanatic:

We arrived in Paris in the late afternoon. This is just enough time to take a taxi to the city, check into our apartment, and take a medium-length walk to orient ourselves to the neighborhood. We had rented a small but well-located one-bedroom AirBNB apartment in the 4th district. The red-eye had made us quite tired, but we forced ourselves to take a walk to fight off jet lag. Given that it was mid-June, the sun was out probably close to 10pm.

Sleeping at the wrong time is one of the worst things you can do for jet lag.  So, from our apartment, we walked to the center, via Les Halles, the Centre Pompidou, and down towards Notre Dame. We picked up some street crepes to please the boys along the way. After a few quick photos there, with tired kids, we called it a night and took the train back to get some sleep.

Given our sleeping schedules and jet lag, our morning started quite early, around 4:00am.  After hanging out in the apartment for a bit, we eventually set out around 6:30am.

On this initial full day, we actually made a ton of mistakes, and had a few attractions being unexpectedly closed. That said, it was still a lot of fun! If something is unexpectedly closed, it’s just a matter of finding the next interesting place to visit on the list. It’s hard to believe how much we saw, with children no less, in a day.

We walked a ton – probably more than we should have, but some of this was simply motivated to keep ourselves awake from jet-lag and reset our body clocks.

While walking to Notre Dame, we walked around l’Île de la Cité, the small island in the Seine where Notre Dame is located. At the far point, we came to Pont de l’Archevêché, A.K.A. a “Love Lock Bridge.”  When the boys asked why there were so many locks, we told them that when people fall in love, they will often write their initials on a lock, fasten it to a bridge, then throw the key in the water, symbolizing that they are forever locked together.

Of course, the weight of the locks is a problem, so the city will periodically cut them off the bridge before they have to build a new one.  Not quite sure if I want to tie that into the symbolism… 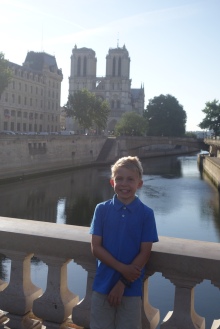 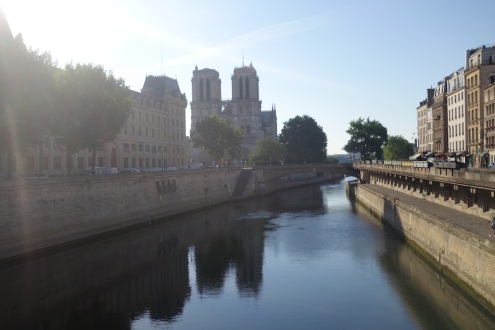 We wandered more around the island, and then decided to attend the Notre Dame mass at 8:30am. We try, if we can, to attend some sort of church service when away on a Sunday, and how often does one get to do so in such a magnificent cathedral? (Especially with the recent April 2019 tragedy there! 😦 )

The cathedral was fairly empty. Some of this is to be expected given France’s secular reputation, but I imagine too that people attending church probably typically go to neighborhood churches, rather than a big, touristy, cathedral that is filled with people snapping pictures at you. 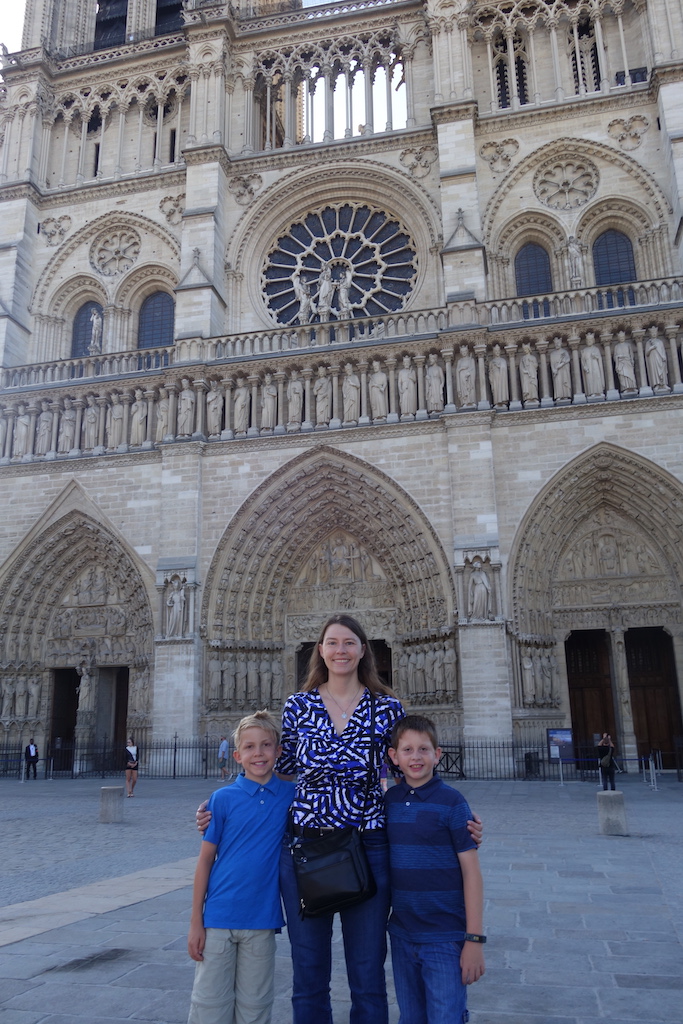 Not knowing French, I would have preferred more music, but it was still interesting to experience.  On the other hand, Jeremy had several years of high school French, and could mostly follow along the written bulletin.  The spoken language is somewhat more difficult for him, but he got more out of the service than the rest of us.  Of course, the boys got a bit bored, but it was manageable; there were plenty of rafters and windows for them to count during the service.  Regardless of where you fall on the spectrum, you can always use the time to admire the architecture or enjoy a break from walking.

Continuing our morning wander, we made it to the Eiffel Tower.  This was our third visit to Paris, second time with the boys, and since they had never been up to the top, we decided to get in line.  Unfortunately, after waiting a while and just before paying for our tickets, the police started shooing everyone away. Some sort of security issue.  With no timeframe when we should return, we left and decided to venture elsewhere.  At least we hadn’t bought our tickets yet.

On our way out, we decided to stop at a sandbox and have James re-create the sand castle that he made 5 years before, when he was in preschool.  I think it may have been a slightly different sandbox, though.

We had planned to go to Les Invalides and Musée de l’Armée next, since they’re near the Eiffel Tower. But again, we were thwarted when we found out it was closed. It seemed that the closure  reason was related to Father’s Day.

With our plans being upended, we scanned the map about what to do next, and decided to take the train to l’Arc de Triomphe from Les Invalides. But, being disorganized given the closed attractions, we realized that the kids were hungry once we got off the train, and that it was lunch time.

Alas, continuing on our string of misses from the morning, we realized that many of the restaurants in this section of Champs-Élysées was going to be somewhat touristy and over-priced. The kids noticed the McDonalds on the grand avenue, and we were hungry, so it seemed to work at the time, albeit not an ideal choice in the French capital. Fortunately, I discovered that the McCafe is actually fairly nice in Paris.  Not as nice as a real French pastry shop, but good enough to make me feel like I might not be in one of my least favorite restaurants.  Plus, the McBeer helped sooth me a bit too.

After regrouping, we went down the street to l’Arc de Triomphe.  The boys decided to practically run up the stairs.

Fortunately, a room partway to the top had an interesting statue that slowed them down a bit, and I was able to catch up. 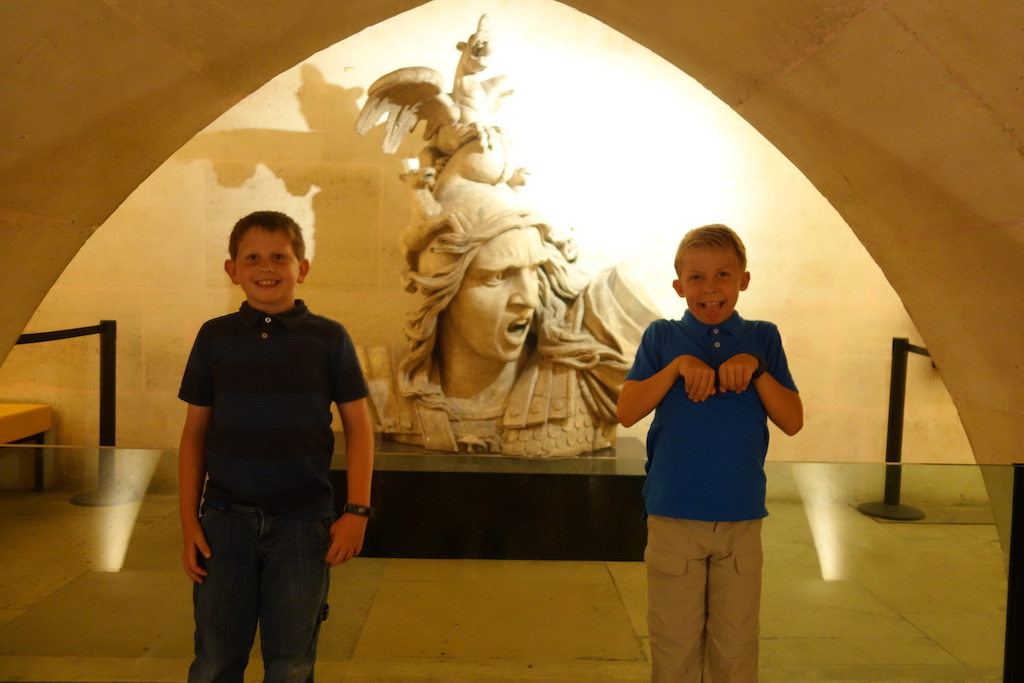 At the top, we had some fabulous views of the city.

At this point, it was mid-afternoon and we were beyond exhausted.  Our strategy for jet lag is to force ourselves to walk outdoors as much as possible on the first full day.  Mission accomplished!  The sunlight helps your body produce melatonin at the right times, which helps you sleep at the right times.  In combination with eating at the right times, we were well on our way to a normal sleeping schedule.

But, we still needed a mid-afternoon nap.  The trick with a nap is not to turn it into an overnight sleep.  Set an alarm, and force yourself to get up.  The pain is real, but your body will thank you the next day.

After our nap, it was late afternoon, and we decided to walk to the Centre Pompidou.  The boys loved the quirky exterior. But having been inside previously and not being a huge fan of modern art, we decided that this was all we needed to see. The boys did like the sugar crepes that we bought at the stand, and we enjoyed the ambiance with all the street artists and decorations. 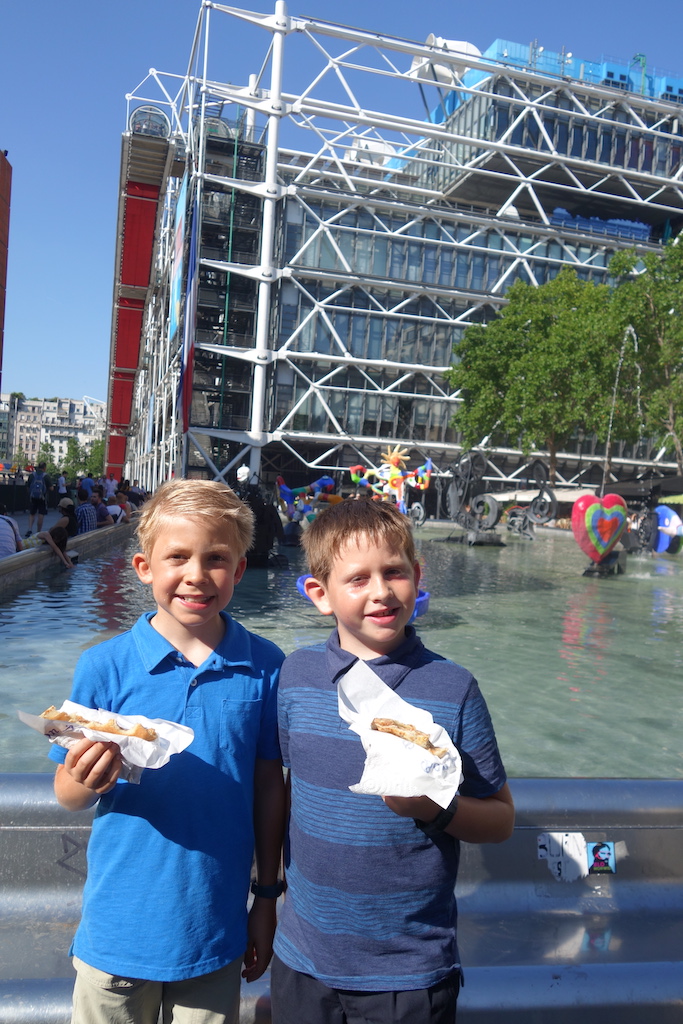 We kept walking towards the middle of the city. Looking at the map, we decided to visit Sainte-Chapelle, since we’d never been there before. Part of our reason skipping on previous visits was probably because it’s effectively in the shadow of Notre Dame, but unlike Notre Dame, it has an entrance fee. That said, it was a nice visit.

There isn’t a lot on the inside, but the stained glass was beautiful!  If you are into stained glass, definitely make a stop. 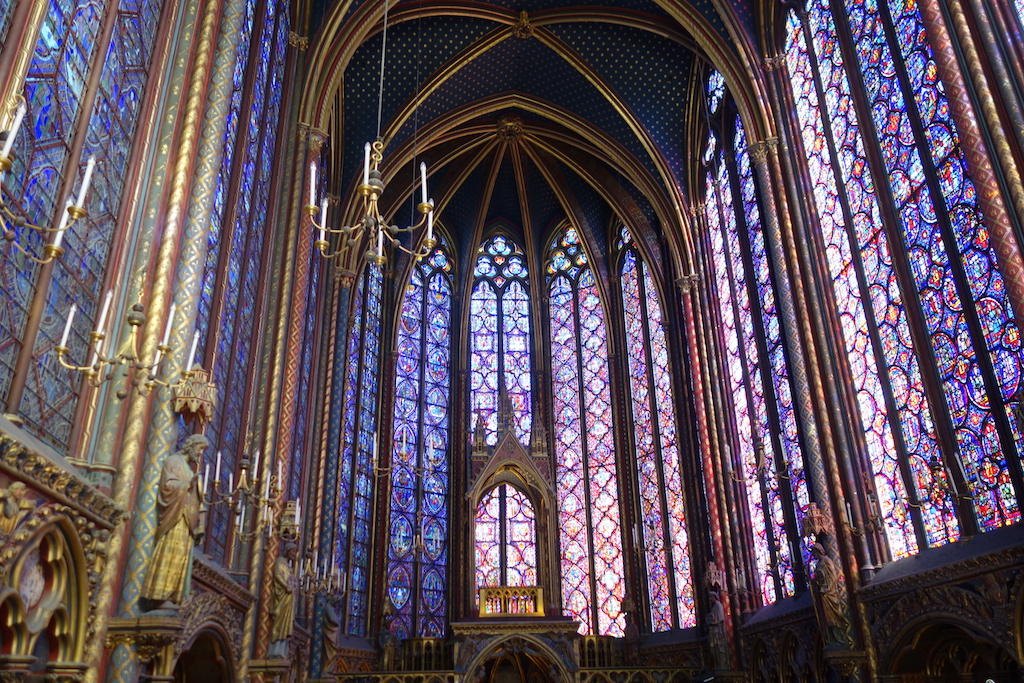 On the other hand, the boys liked the lizard-like things on the rug.

For dinner, we stopped at a somewhat touristy area of town and picked something that looked reasonable.  Time for french onion soup!  The broth was really good, although not as good as some we have had in previous trips.  My lamb was just mediocre, but Jeremy’s steak with gorgonzola sauce was much better.  For desert, we got a mixture of cheesecake, chocolate mousse, and ice-cream.

We continued into the Left Bank, walking down Rue St Michel, and wandered by the Panthéon, which we think was decorated for Father’s Day.

Our final stop of the day was the Jardin du Luxembourg, or Luxembourg Gardens.  After a peaceful stroll, we decided to take the train back. 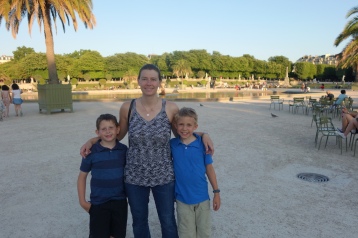 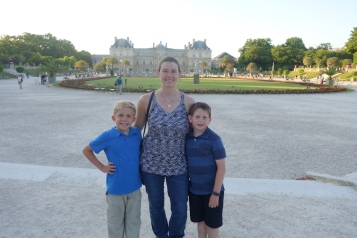 Thwarted again!  The subway station closest to us was broken, so we had to walk to the next station.  Given our exhaustion levels, not the best scenario, but we made it back to our apartment a little before 10pm.  Ahh…wonderful sleep. Next day in Paris.