We woke up in Amsterdam with a minor panic – we noticed bumps on our bodies, wondering if we had somehow picked up bedbugs in the previous hotels. After a brief freak-out, we did a few searches on our phones, and realized that the bite patterns mostly didn’t match. We also realized that we’d slept several of the previous nights with the windows open (no screens in Europe), and that the bumps were probably just from run-of-the-mill bug bites. Traveling has its set of ups and downs!

Given that Jeremy and I have been to Amsterdam before and that we’d shown the boys some highlights the day before, we decided to ignore most of the city sights, rent some bikes, head out of the city, and enjoy the Netherlands countryside. 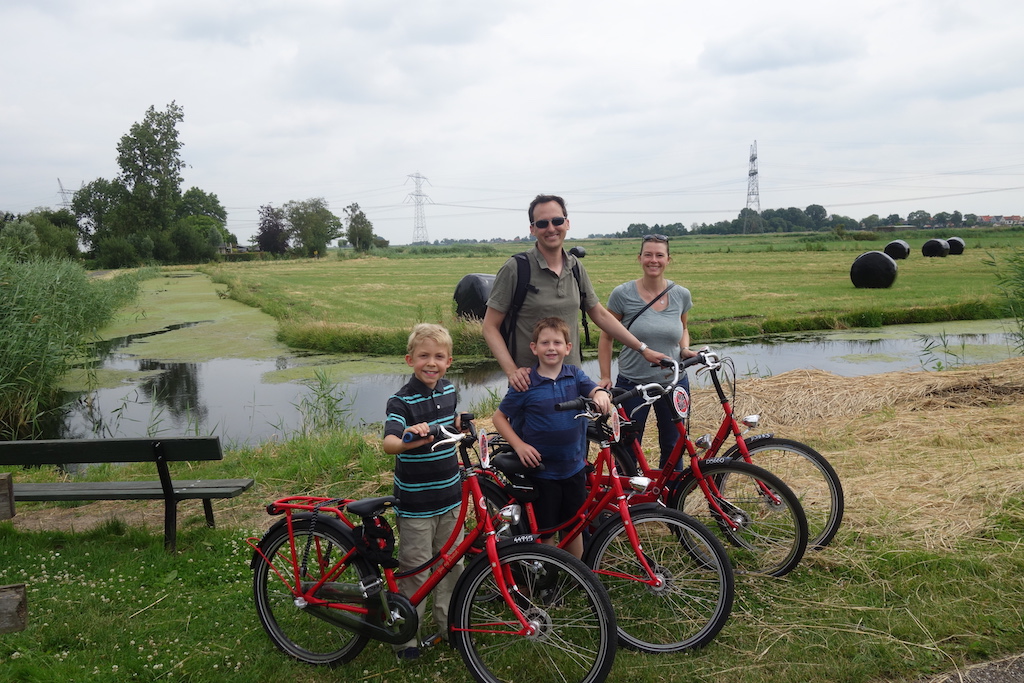 When looking at bike rental companies, not all of them had children’s bicycles. But, having poked around online, we found one that made sense.

The place we selected was a short walk east of the main station and close to the waterfront.  When they gave us the bikes, we asked for helmets for the kids.  One thing to realize – basically nobody wears helmets there. The guy gave us a somewhat pained look and told us that he would look to see if he had any.  After what appeared to be a difficult search he came back with a couple that were decorated for girl toddlers.  John clearly was unhappy, and even James was showing some resistance.  We had been told that even children rarely wore helmets, so we went with it and decided to pass on the helmets, hoping that the rumors of safer bike routes here were true.  As it turned out, in the sea of bicycle riders, we only saw a handful of helmets.  The local kids clearly did not wear them, so we only felt like mildly bad parents.

Getting out of the city was a bit nerve wracking.  The kids had never experienced that many bicycles on a bike path, and I was nervous that they were going to do something that would injure their helmet-less heads.  Luckily, it all worked out.

After crossing the canal on a ferry, things became rapidly more peaceful, as we exited the urban zone into the surrounding countryside. 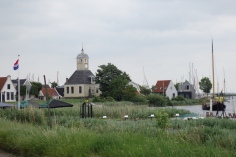 We made several stops to see the farm life.

And enjoyed the cute canals and bridges. 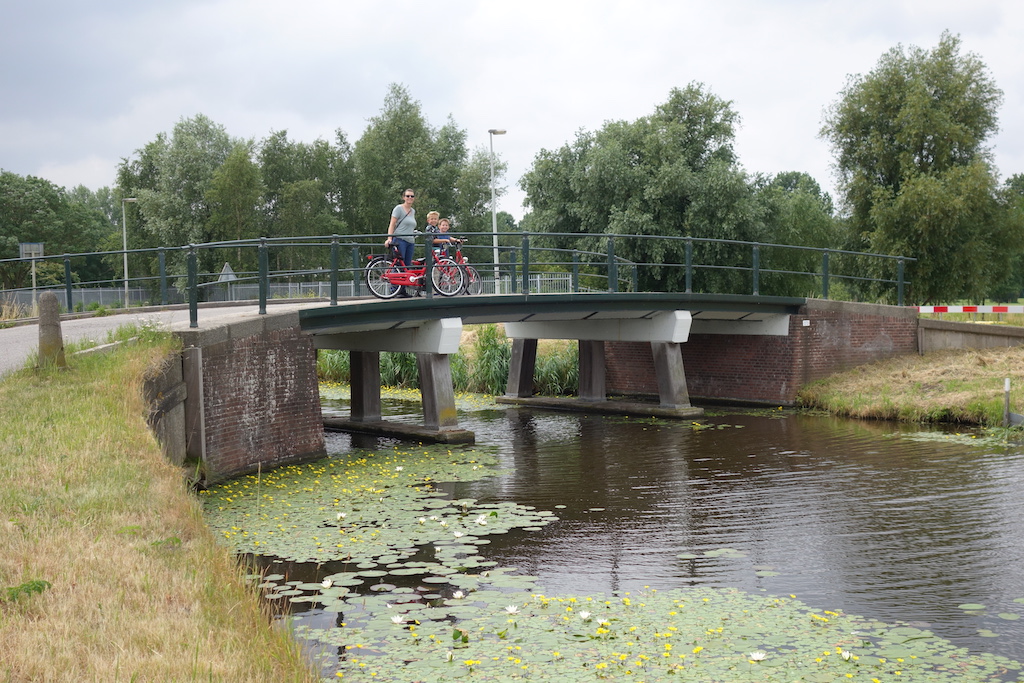 At some point we stopped for lunch at a small cafe along the bike path, enjoying the convenience of the built in bicycle locks.  Jeremy got a very nice meatball with bread.  John said his hotdog was the best he had ever had.  Maybe it had something to do with the cheese on top.  We were having so much fun that at one intersection we debated significantly extending our trip, but the wind was picking up and we were worried about the boys’ stamina.  Probably a good thing since the way back to the ferry was against the wind.  Still, it was a really nice way to spend the day.  Everyone was really happy on the ferry.

After returning to the city, we decided that the kids were experienced enough now to handle the crowded bike lanes, so we spent some time biking within the city to some of the more interesting outlying sights that were a bit far to get to by foot. 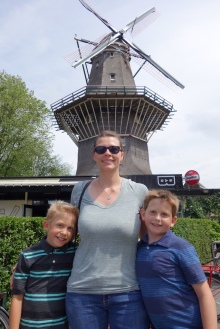 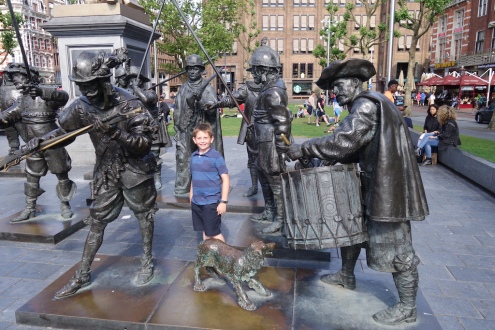 What a delightful way to spend 4.5 hours!  After returning our bikes, we set out on foot.  We stopped for a while at Rembrandt Square, then walked by the Heineken brewery.  But with boys in tow, we decided to skip it.  But I was able to get another cheese soufflé at Febo! 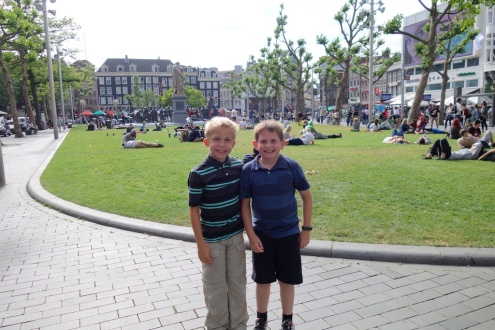 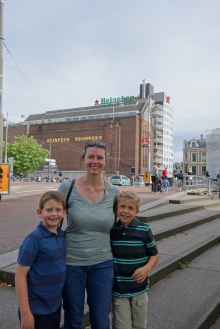 Then we found a playground with a zipline.  Why are playgrounds in other parts of the world so much more fun than playgrounds near our home?  The boys claimed to be quite tired, but as much as they ran back and forth, it wasn’t as bad as they had led us to believe. 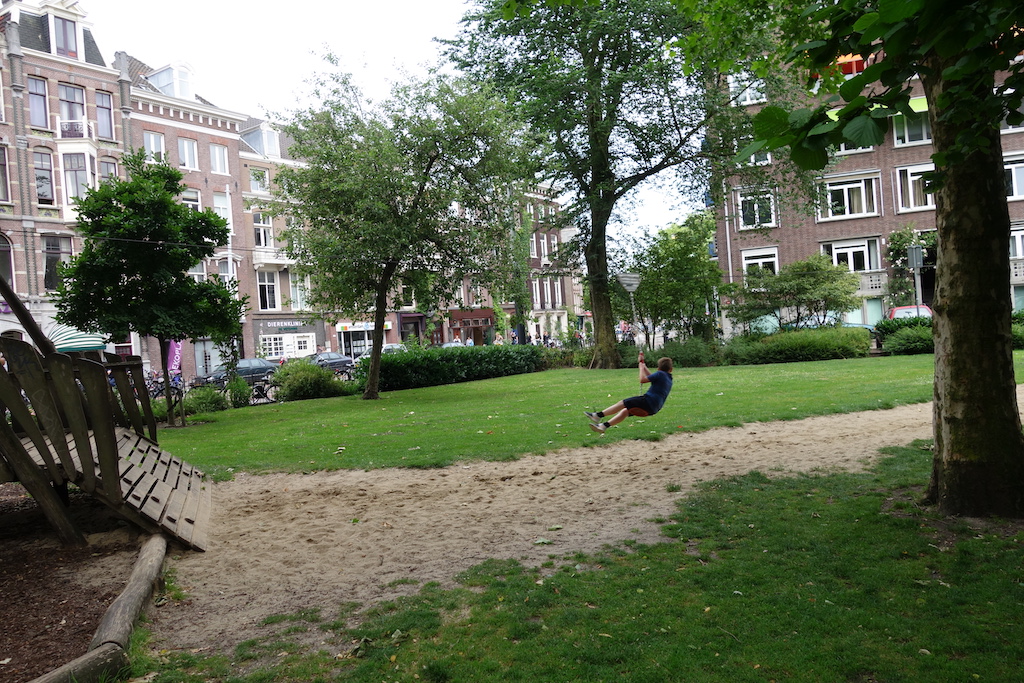 On our way back to the apartment, we decided to stop at an Italian place for dinner.  The boys really wanted pizza.  My lasagne with gorgonzola sauce was fabulous!  And Jeremy enjoyed his tortellini.

We decided to take a long walk back, but realized after the fact that we probably shouldn’t stay out too late on a Friday night in Amsterdam, given some of the craziness that happens.  Oh well, the boys were too young to understand the worst of it.

Before returning, we picked up a round of garlic herb gouda for breakfast.  In retrospect, quite silly.  Way to much cheese and not enough bread.  On the other hand, we were surprised to learn that if left unopened and unrefrigerated, the cheese could last up to 4 weeks.

If you are interested in more Netherlands bicycle stories, read about Jeremy’s 2018, 10 day bike tour from Amsterdam to Paris! Next up: Annecy.