The Loire Valley was one of my favorite places in France.  Even though we only spent 2 nights, 1 full day here, it is a place I would love to come back to for a longer period of time. 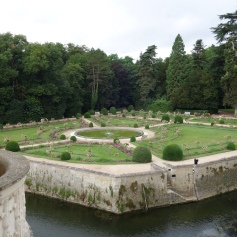 The Drive from Chamonix to the Loire Valley

Our morning started fairly early and we were out of our Chamonix apartment and in the car by 8:20am. We had a long drive ahead of us, but it went fairly well.

The first stretch of the road, down the mountain, was beautiful, though slightly curvy. On that note, one strategy we frequently have is to take a couple of the airline sickness bags with us from the flight. Ziplock bags are also handy.  In this particular case, we actually needed one of bags for one of the boys – fortunately, we were able to get it out in time!  Thank you Air France!

The main French highways are generally fairly well-maintained with reasonably high speed limits (130km/h, or about 80mph). Unlike German highways, French highways have ubiquitous “péage” (tolls) signs – probably adding up to EUR 40 for the (longish) day’s drive in this case.  For lunch, we ended up grabbing some sandwiches from some food trucks at a rest stop, and made a couple of other stops in the afternoon.  John was surprised to discover that his hot dog came in a baguette.

One issue we ran into was Jeremy’s injured foot. The day before, while hiking in Chamonix, he slipped and fell off a small cliff, probably related to hiking in street shoes, rather than in boots.  His foot was feeling a bit better in the morning, but still not ideal. Since we had rented a manual transmission car (they’re effectively the default in much of Europe), and since I can’t drive a manual, he was stuck with the driving.  Fortunately, cruise control helped for some decent sections. You can read more about our experiences with driving in other countries.

Evening in the Amboise

Everyone was thankful when we arrived in Amboise around 4:30pm.  There was a small problem finding our lodging – “11 ter” was across the street and a half block away from “11”, but eventually we made it.  After checking into our apartment, we decided to get a view of the Château d’Amboise.  Amazing!

Since doing a lot of walking wasn’t in the cards (both tired and a burst of rain), we decided to spend some time in a restaurant.  The food was a bit mediocre.  The french onion soup had the bread and cheese on the side!  But the tatin – an upside-down apple tart – was quite good, as was the local white wine.  The boys definitely didn’t mind sticking around for dessert!

Today, we drove around the Loire area, went to two castles, and saw several more as we drove among the towns.  So beautiful!  Tons of fields, castles, and the Loire river.  The towns themselves were neat, in a very regal, lush area.

After breakfast, we decided to drive to Château de Chenonceau.  The outside was beautiful, if a little understated in comparison to some of the other castles in the area.

Walking up to the castle, there was both a nice path and a moat.  Again, both were quite nice, although more flowers could have dressed up the path. 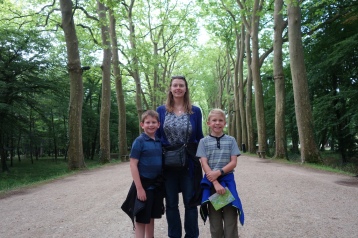 The inside was beautiful, with quite a few nice Renaissance-era paintings and even a little chapel.  The banquet hall straddled the Loire.  I particularly liked the kitchens.  The gigantic cauldrons and other massive equipment gave a picture of what life may have been like. John liked that the was decorated with animal heads. In one of the rooms, they showed how parts of the castle were used during WWII. Another odd thing that we observed was watching the staff having to “shoo” the birds out of the castle windows. 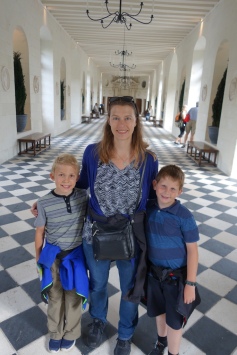 The formal gardens were also quite nice. 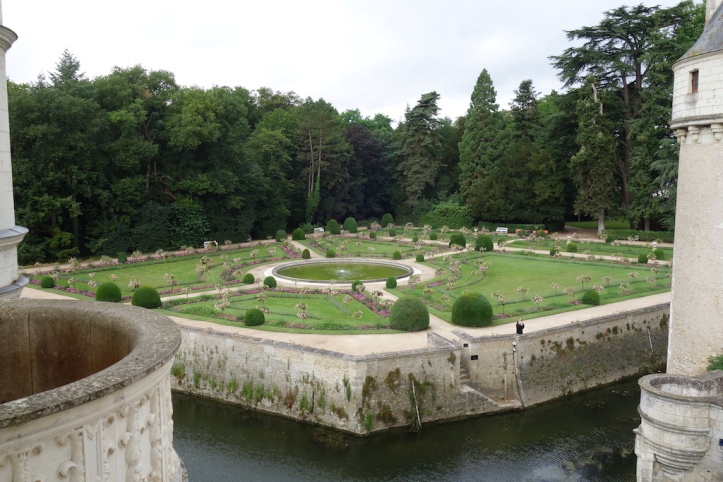 The kids loved the maze made out of hedges and could have spent more time there, but it was raining, so we decided to head back to the car. 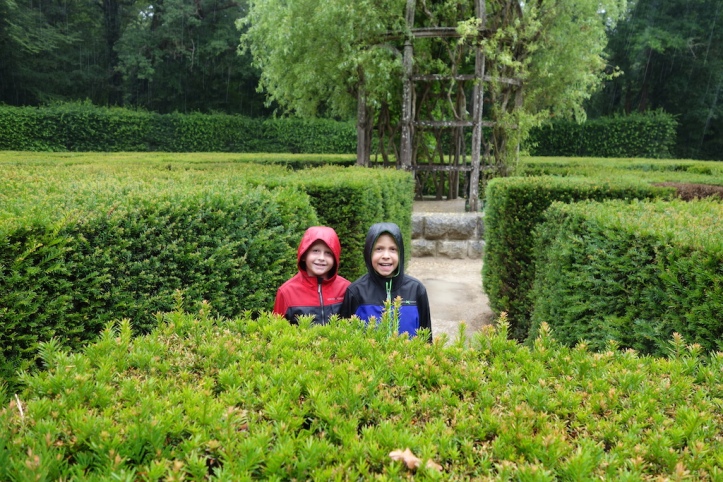 We then drove by the nearby town of Cheverny, debating between there and Blois, and realized that it was lunch time. We had thought that we’d eat at a restaurant there, but we found a great bakery and the quiche and sandwiches we picked up were awesome.  We ended our lunch with a cream puff with aqua frosting, a fruit tart, and a chocolate tart.  Yum!

There is actually a castle in Cheverny, but we decided to skip it.  There are really only so many castles you can see in one day, and you need to save some of them for a return trip.

Our next stop was my new home!  I wish.  Can you imagine being able to call this home?  Château de Chambord was beautiful!

Although the inside was a bit more plain and had the feel of an art museum rather than a picture of what a castle was like back in the day.  The rooms were quite large and had some nice paintings of hunting scenes.  I was a bit disappointed that there was no kitchen to tour, and the second floor had a lot of modern art, which really isn’t my thing.  But the outside and the gardens were beautiful!

Deciding we were done with castles, we stopped for coffee and soda in a garden cafe on the way out, then drove along the river back to Ambroise.  Beautiful!

Blois would have been fun to walk around, but the view from the road was nice and Jeremy’s injured foot was starting to get sore again, so we decided to skip it.  It was a  really nice drive with lots of towns with smaller castles.  I could easily spend much longer in this region.

No one was super hungry for dinner, so we decided to go to another bakery and get some sweets.  Yum! 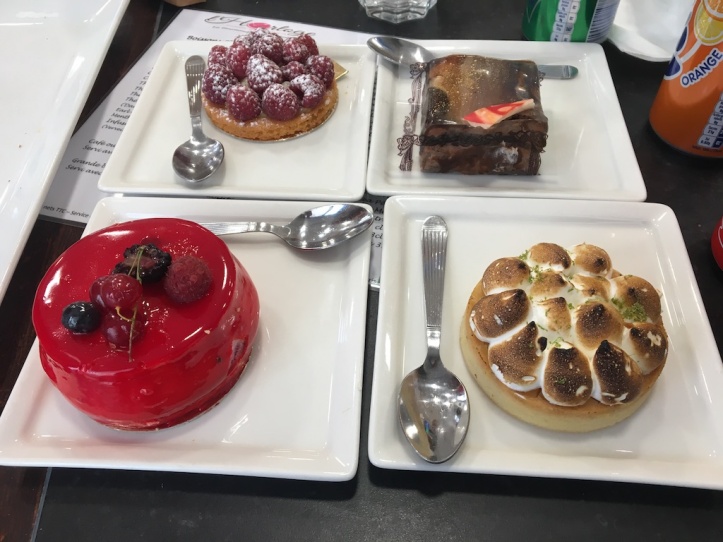 Everyone was a bit tired, so we decided to head back to the apartment early and get some rest before heading out the next morning.  Of course, the boys enjoyed more of their favorite French cartoon: “Les Lapins Crétins,” laughing hysterically the entire way through it. Next stop: Mont St. Michel.