Continuing on our 2017 France trip with kids – on our second full day in Paris, we decided to sleep in a bit, take the kids to the Louvre in the morning, then spend the afternoon wandering the city.

On the way to the Louvre, we passed through Les Halls, finding a statue – l’Écoute, or The Listener.  The kids loved it! 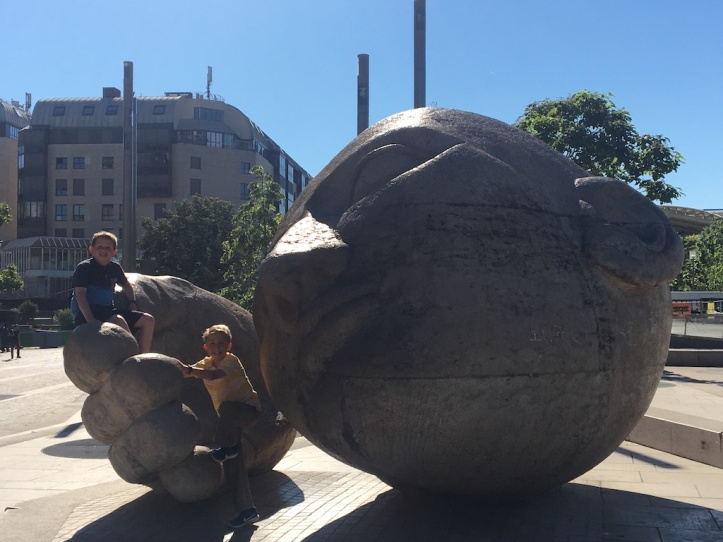 As the world’s largest art museum, no trip to Paris would be complete without a visit to the Louvre.  Given the size, you are bound to find tons of artwork to enjoy.  As an art lover, you could easily spend the entire day there, but kids will not last so long.  We find that after about 2 hours, the kids will peak, and after 3-4 hours they will completely melt down, so we tend to pick and choose what we will see in large museums like this. 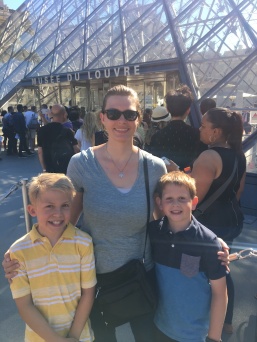 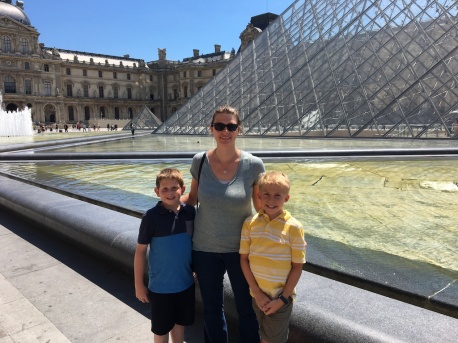 Since this was my third visit to the Louvre, we opted for a quick visit, ending around noon.  We did make sure to see the Mona Lisa (overrated, but you should take a peek at it), the painting of Napoleon crowning himself, and a bunch of others. Even John found some paintings he liked a lot – for instance, some gory Biblical paintings with David holding Goliath’s head.

In Paris, outdoor seating in good weather can be nice  We enjoyed a lunch back by Les Halles.  While the boys opted for “steak” (hamburgers) and fries, I started with a salad topped with seafood, then followed it with salmon and ratatouille.  The ratatouille was amazing!  Yum!  But everything else was fairly ho-hum. 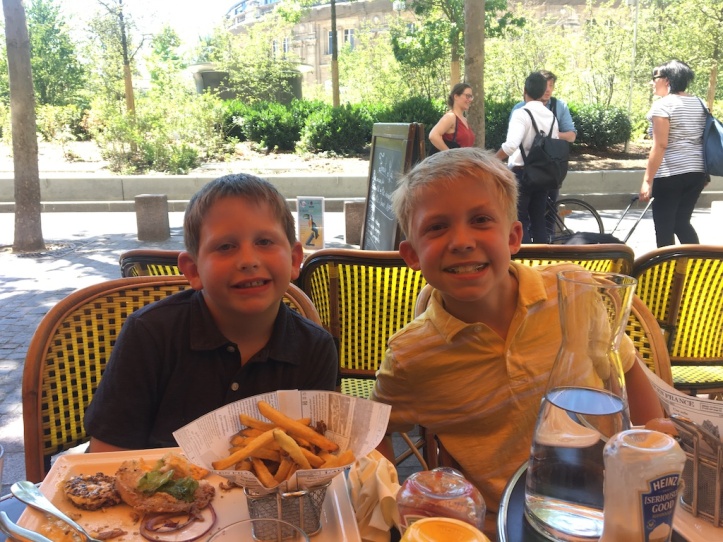 Garden of the Tuilleries

Jeremy really wanted to walk to the Garden of the Tuilleries, so we headed that way even though the heat was really picking up.  There was in fact an unseasonable heat wave. So, we wandered a bit, took a picture of the obelisk at the end of the park, then headed back to the apartment to rest and cool down for a mid-afternoon nap. 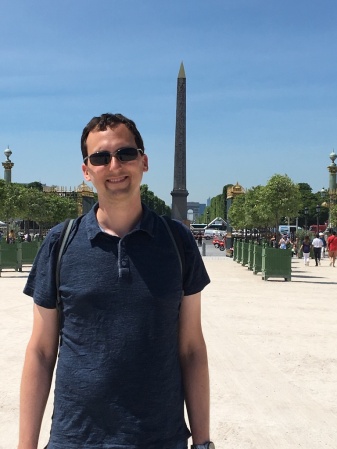 After our afternoon nap, we took the train to Montmartre.  The major site at the top of it is the Basilica of Sacre-Coeur. 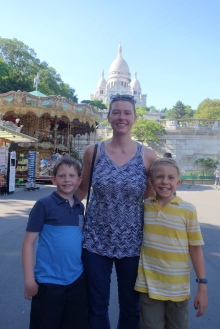 We climbed the stairs to the top, but it was hot! The breeze helped, and, like others, we spent some time sitting on the hill in some shade.  Quite pleasant!

Afterwards, we walked down the Montmartre hill, wandering around that section of town. We stopped at a bakery in the IXth, and ate in a park, where the children played for a while.  My chèvre and tomato quiche was awesome!  James was equally happy with his eclair and doughnut.

Next was a stroll by the Canal and to Place de la République, after which we went back to the apartment for delightfully cold showers.  85°F (and humid) at 10:30PM!  Thank goodness we were staying in an apartment with a washing machine.  I would hate to think what we would smell like if we had to re-wear our clothes at least three times before tossing them into the laundry bag.  Without a washing machine, packing light is easiest when there isn’t a heat wave! Next up: Versailles!