On our third day in Rome, we had tickets to visit the Vatican in the morning, then we planned to play things by ear depending on how tired we were.  As it turns out, we ended up having a delicious lunch, visiting the creepy, yet beautiful Capuchin Crypt, and went back to both the Spanish Steps and the Trevi Fountain. 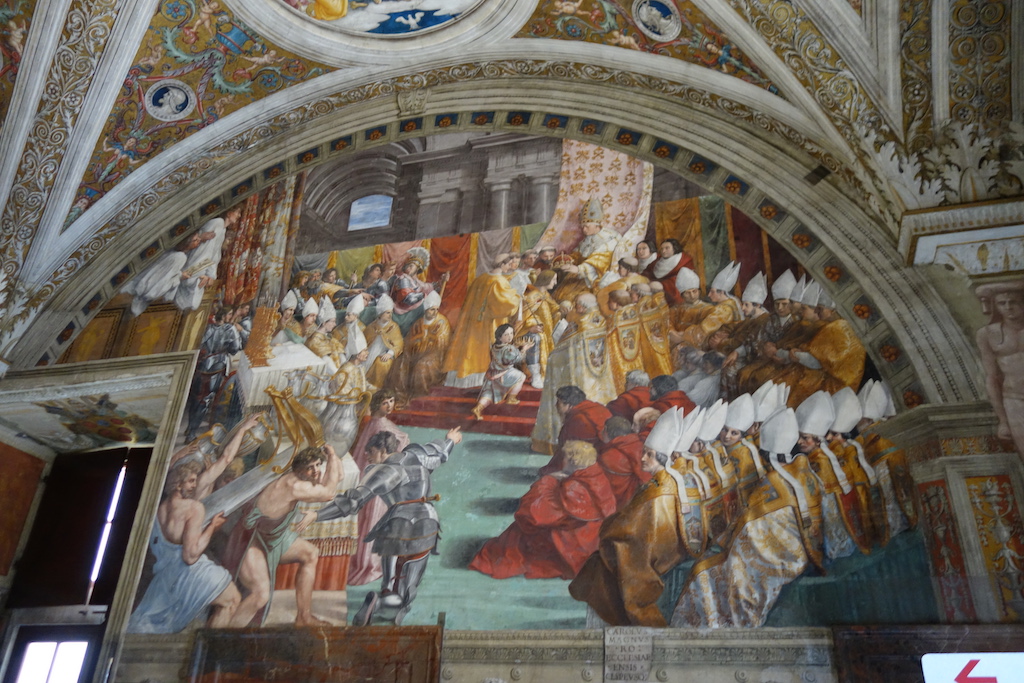 Our morning started with another breakfast in the apartment.  For whatever reason, John was really excited about a watermelon that we had picked up.

Afterwards, we used Google maps to figure out the best route to the Vatican, then we were on our way.  To our delight the bus was quite empty again and we had a very pleasant ride.

About a month after we had made reservations for the Vatican, we found out that the Sistine Chapel was going to be closed for another event just after our arrival.  We decided to arrive earlier than our scheduled time and hope that the door guards would be nice about letting us in.  It worked, and we got in a full half hour early.

We decided not to dawdle on the extremely crowded path to the Sistine Chapel, and managed to capture some reasonable pictures of the beautiful ceilings on the way. 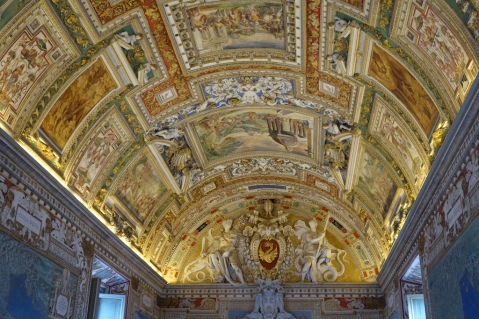 50 minutes later, we finally made it to the Sistine Chapel, only 10 minutes before the last entry.  Whew!  So beautiful!  They don’t allow pictures, but we were able to admire the incredible artwork for quite a while.

We weren’t ready to leave, so we didn’t take the tour group exit to St. Peter’s Basilica.  Instead, we decided to go explore the other parts of the museum.

Feeling exhausted, we sat in the courtyard for a bit, then decided to head out. 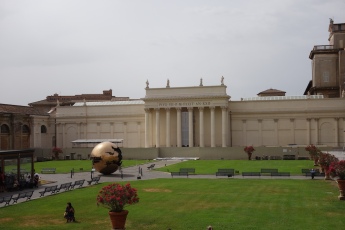 Completely forgetting to backtrack to St. Peter’s Basilica – which we did on the next day, we hopped on the metro to the Spanish Steps.

Just past the metro, we spotted a huge candy store, so of course the boys wanted to go in.  My parents didn’t mind either.  John was enamored with a “Snickers” drink and a gummy hamburger.  It tasted exactly like a melted Snicker’s bar.  Gross!  But, John liked it.  For James, we had to be selective with some candy, since I really didn’t want to figure out how to deal with broken braces in Europe… 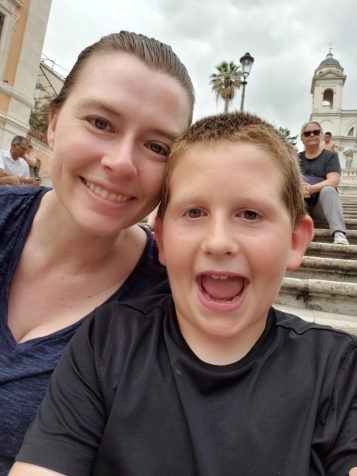 Still tired from the Vatican Museums, we decided to rest on the Spanish steps for a while.  James pulled out his sketch pad and did some fairly nice drawings of the surrounding buildings.

We decided to wander back to the apartment and find a restaurant on the way.  Preferably one with air conditioning and comfortable indoor seating.  Between the Trevi Fountain and Barberini Square we found a delicious restaurant named Klass.  With 5 people, they didn’t have room for us in the main room and gave us a private room with plush velvet chairs.  So comfortable for our tired bodies.  The service was quite slow, and they initially gave us the more expensive regular menu and we had to ask for the tourist menu that we saw outside, but the food ended up being amazing!

One comment is that the tourist menus tend to be a bit cheaper, but the food choices are much more limited.  Usually they will include two or three courses, plus a beverage, and sometimes coffee.  If all you really want is pizza, pasta, or lasagne, it is a good choice.  On the other hand, if you want to try something less standard or have more variety, pay a bit more and order off the regular menu.

John and I decided to split two tourist menus.  Mine came with lasagne, a chocolate soufflé that turned out more like lava cake, and a glass of wine.  His came with bruschetta, a pasta with a bacon and tomato sauce, and a soda.  With two courses, spitting like this allows for the ability to try more things.

After lunch, we decided to go back to the apartment to rest and journal.

Once we were ready to go back out, we decided to walk a block away, to the Capuchin Crypt.

If you are traveling with teen or pre-teen boys, don’t skip this site.  It is both creepy and amazing!  Some crazy monk had the idea of decorating a couple of chapels with the bones of about 3,700 deceased monks.

The beginning had a lot of interesting history and stories that I wanted to read.  John kept peeking into the next room to find bones.  At one point, he was gone a little longer than he should have been, and he came back and started tugging on my arm to get me to move faster.  It has been a long time since I have seen him quite that excited.

Eventually, I gave up and went along with his excitement.  A few rooms later, he was able to show us what he found.  It was one of the weirdest, things I have ever seen, but still quite beautiful.  Artwork from bones.  It was almost mosaic-like, in a disturbing sort of way.

We couldn’t take pictures, but we bought him a few postcards on the way out.  They are hung proudly in his room.  Hmm…Maybe we should rename him Friar John Capuchin.

We went back to the apartment to rest a bit more.  When we went to head back out, one person had a bad fall.  It was to the point that I was trying to figure out if we needed to go to the hospital, so I texted Jeremy to have him do some research on English-speaking options and send me some phone numbers.  Fortunately, they were never needed.  As it turns out, we simply needed to ice the knee, then go to the nearby pharmacy and get a knee brace.  Could have been much worse, but we decided to limit activity for the rest of the day.

We did manage to walk to the Trevi Fountain, but kept it slow.  For dinner, we picked up random snacks that caught our eyes as we walked.