The Roman Forum is one of those sights that deserves a lot more attention than it typically gets.  Given that your ticket to the Roman Forum also includes the Colosseum and Palatine Hill, there is a lot to see and the distances are much vaster than you might expect.  The result seems to be that the Roman Forum often gets a rush job.  Plan to spend a bit more time here, as long as it doesn’t impact your time at the Colosseum. 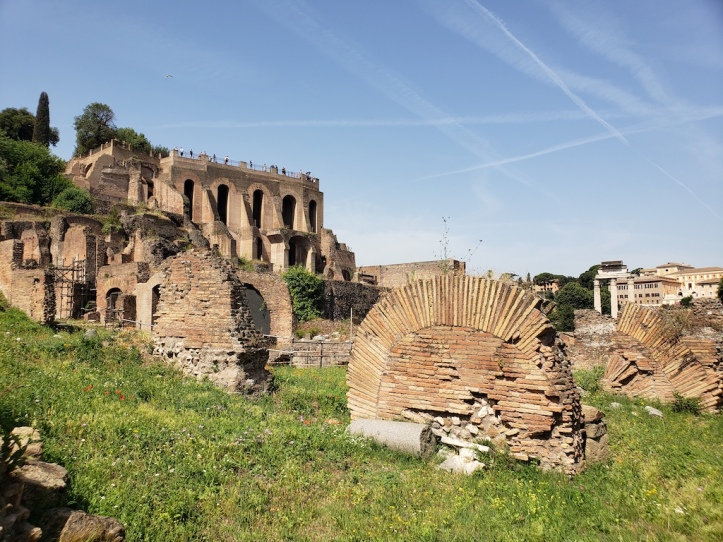 We have been to the Roman Forum three times.  The first time was pre-kids, in April of 2005.  Following some advice on how to get the shortest lines, we chose to see Palatine Hill first, the Roman Forum second, and the Colosseum last.  It was early enough in the year to have few issues with heat, so we took our time.  In fact, we spent so much time at Palatine Hill that the physical exertion was too much and by the time we arrived at the Roman Forum, I was too exhausted to do much justice to it.  Worse is that I was really cranky by the time we hit the Colosseum.

The second time we went to the Roman Forum was in June of 2015, and we were with young children.  We decided to do the Colosseum first, while the kids were fresh, spend a very short time on Palatine Hill, and then go to the Roman Forum.  We arrived at the Roman Forum just before lunch in the heat of the day.  While Jeremy and I were fine, the kids were so hot, hungry, and cranky, that we ended up not being able to see it well.  Apparently, we didn’t conserve quite enough energy, and should have found some lunch between sights. 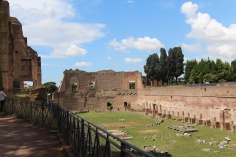 In 2019, I was traveling with both our pre-teen kids and my parents.  We decided to do the Colosseum first, Roman Forum second, then get lunch and wait to see if we had energy for Palatine Hill in the afternoon.

Unfortunately, we were on our first day of jet-lag and Rome was in the middle of a heat wave.  While we were able to give the Roman Forum a more thorough treatment than the previous two trips, the heat was building and both the kids and my parents simply ran out of steam.

After the Colosseum, we probably should have taken the bus back to our accommodations, taken a nap during the heat of the day, then came back to see the Roman Forum in the late afternoon or early evening.  Make sure you check last-entry times and get there well in advance of that time since the lines may be longer than you expect.

Another suggestion is that since the combo ticket for the Roman Forum, Colosseum, and Palatine Hill are good for single entry visits to each site over two consecutive days, you may want to consider visiting the Colosseum on one day, the Roman Forum on the other, and fit Palatine Hill in if you have energy.  Unfortunately, due to scheduling conflicts with the Vatican, we were unable to take advantage of this option.

Getting into the Roman Forum

Palatine Hill is past the Arch of Constantine, which is a little to the left of the picture above.

If you have plenty of energy to see all three sights and are coming to the Forum from Palatine Hill, there is an easy entry gate between the two destinations.  You can go through the entrance gate in either direction, but you are only allowed one entry to the Roman Forum and one to Palatine Hill, so you can’t go back and forth.

Once you have finished the Colosseum, make the walk to the Roman Forum entry gate and get in the advance ticket line.  Even if you bought your Colosseum ticket earlier in the day, you now have a Roman Forum ticket in hand and can skip the longer queue to buy a ticket.

Inside the Roman Forum

If you choose not to get a guide (see my thoughts on guides in my Colosseum post), make sure you have a good guidebook with you so that you can get some relevant information about each point of interest.  There are a few signs that will give you some idea of what you are looking at, but the guide book will likely be better.

It is believed that the Roman Forum was in use from around 800 BC to 600 AD.  The main purpose of the Forum was as a gathering point for community activities: marketplace, speeches, legal proceedings, etc.  One of the more important activities in this Forum was to allow ancient Roman orators to present and discuss topics of the day.  While there were many different forum areas around Rome, given that this particular forum included the Senate House, it is probable that the people who spoke here were some of the most important and well known people in Rome.

Add in the fact that some of the most important people of Rome either lived or worked here, and you have the makings of some very interesting political discussions.  The Senate House was called the Curia Julia.  Another very important building included the Regia, which is either where where the kings of Rome either lived or were headquartered.  The Vestal Virgins lived in the Atrium Vestae.  And the Mamertine Prison was reserved for foreign leaders and generals.

In addition to buildings reserved for the elite, there were several Basilicas that were used for more ordinary purposes, either for legal proceedings or public assemblies.  These included the Basilicas of Aemilia, Julia, and Maxentius and Constantine. 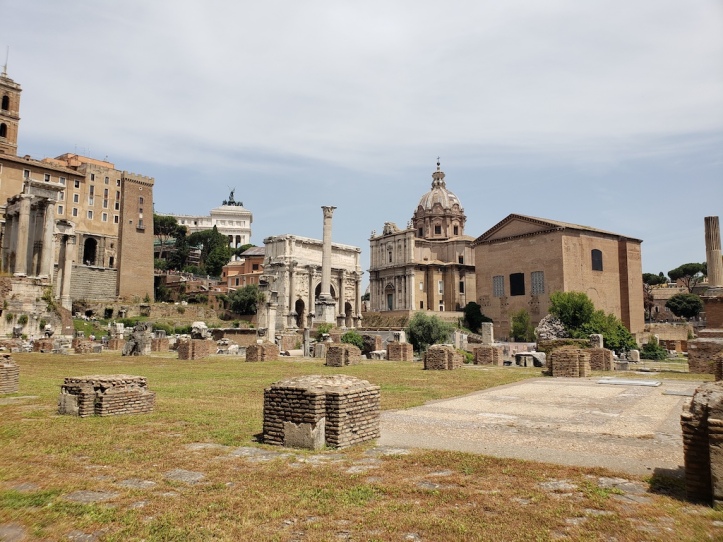 The Via Sacra runs through the middle of the Forum and was both the road that emperors followed on their way to being coronated and the road that armies returned to Rome.

Several arches were built to commemorate various victories.  These include the Arches of Septimius Severus, Titus, and Maxima. 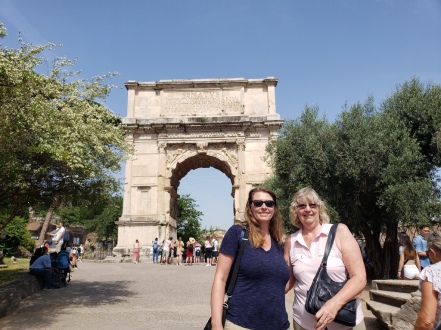 Scattered around the Forum were several temples that were either dedicated to various gods and men.  A common practice for the elite was to build a temple for yourself in the belief that it would make you a god.  The list of temples in the Forum includes the temples of Castor and Pollux, Saturn, Vesta, Venus and Roma, Antonius and Faustina, Caesar, Vespasian and Titus, and Romulus.

It is easy to get a feeling for the place in as little as 45 minutes, but it is also a place that you could spend half a day or more.