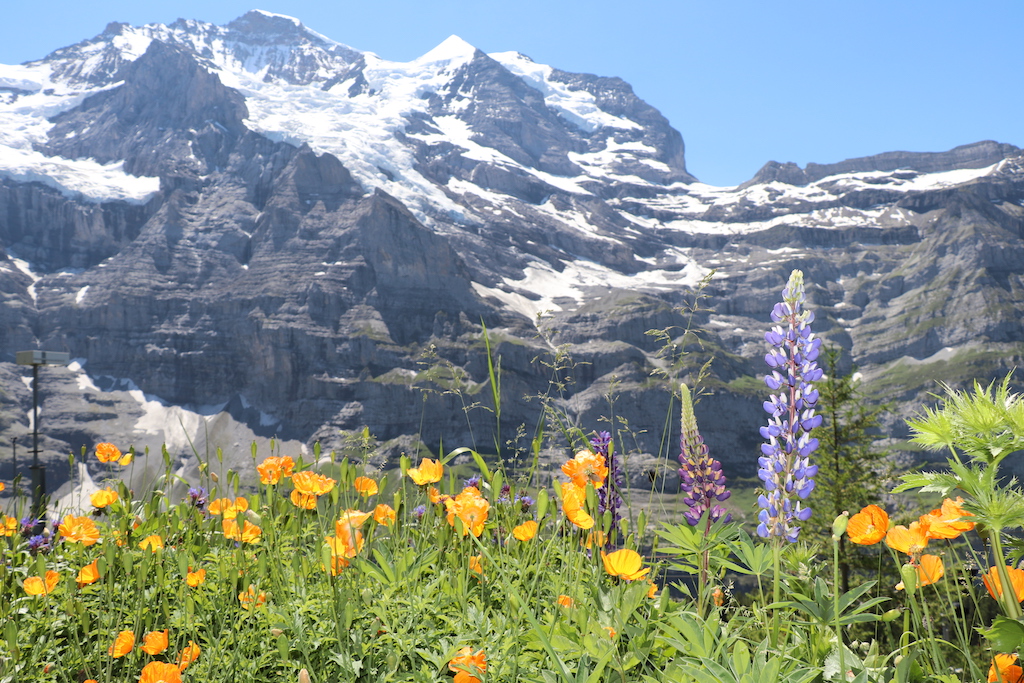 When we come here, we usually stay for a week.  On our last three days, we decided to do the Eiger Walk, the Kleine Scheidegg to Biglenalp to Wengernalp hike, the Panoramaweg Laucherhorn hike, and the Romantikweg hike.  On one of those days, my parents and one of the kids decided instead to go up the mountain to Jungfraujoch, or “Top of Europe.”

Midweek, we decided that a sleep-in day was in order, and we didn’t make it out of the apartment until a bit later than normal.  That said, while in this region, afternoon rain-showers are common and it is usually wise to get an early start.  Given the lack of nightlife and strict noise ordinances, an early bedtime is also usually not an issue.

From here, we hopped on the train going up the mountain to Kleine Scheidegg.  On arrival, we did not dawdle, and made our way immediately to the train for Jungfraujoch.  This train is usually quite crowded, and if you are going to the top, you need a separate ticket.

In this case, we had plans to get off at the first stop, Eigergletscher, which is covered by the Jungfrau Travel Pass.  Usually the lines are quite long, but fortunately they have a separate line for people getting off at Eigergletscher.  Make sure you get in that line and don’t miss getting off the train, or it will be an expensive mistake since further travel is not included on the travel pass.  Usually, the ticket checkers are quite helpful in making sure that you make it off the train.

As we got off, we spent a bit of time just looking around.  Jeremy and I looked longingly at the start of the Eiger Trail, one of our favorite hikes, but the signs at the rail stations indicated that it was closed, so it was off-limits for us. 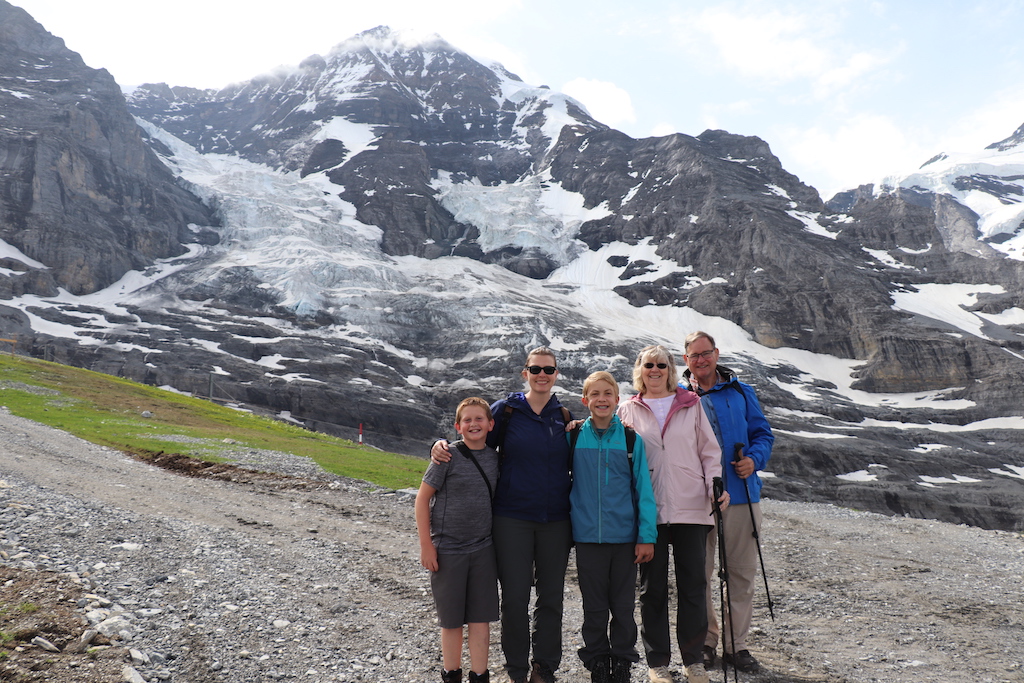 But we were able to do the 1-hour, slightly-but-gently steep Eiger Walk instead.  My parents were happy that we had picked something that they were up for hiking.

As we walked down the mountain, we spent time admiring the North Face, which is the setting for several famous movies, including North Face and The Eiger Sanction, which features Clint Eastwood.

The boys got bored with the wide path, and instead preferred the cow trails.

The wildflowers were quite nice.

Towards the end, we stopped by a little pond.  One section had chairs that allowed the boys to soak their feet.  I think that they were envisioning a hot tub, but instead they got a bunch of snow melt.  Still fun, though.

As we approached town, the views of Kleine Scheidegg were quite nice.

On arrival, it was getting close to lunchtime, so we stopped at a little sausage and rösti (Swiss hash browns) stand that we like.  There are only three tables, so snag one if it is available.

The food was quite good.

From here, we decided to split up.  Mom, Dad, and the boys would do some window shopping, while Jeremy and I did more hiking down the mountain.

Rather than taking the quick, hike along the wide path to Wengernalp, we decided to do the more scenic hike through Biglenalp.  It is listed at 2 hours when hiking uphill, but is obviously a little shorter when doing it in reverse. 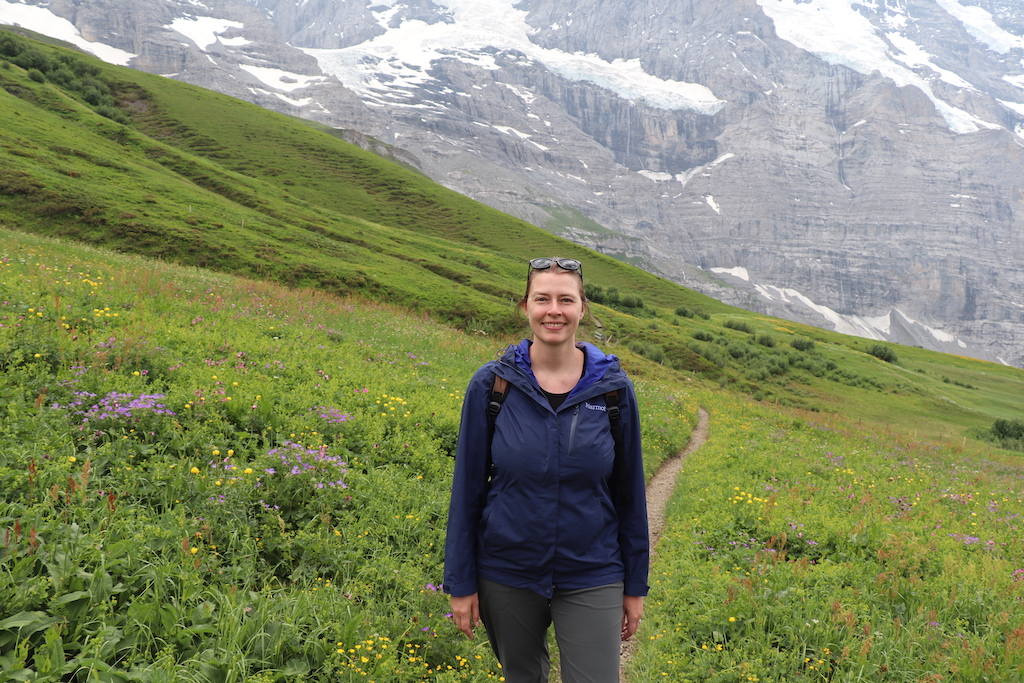 We thoroughly enjoyed the wild flowers.  They were even nicer than the ones on the Eiger Walk. 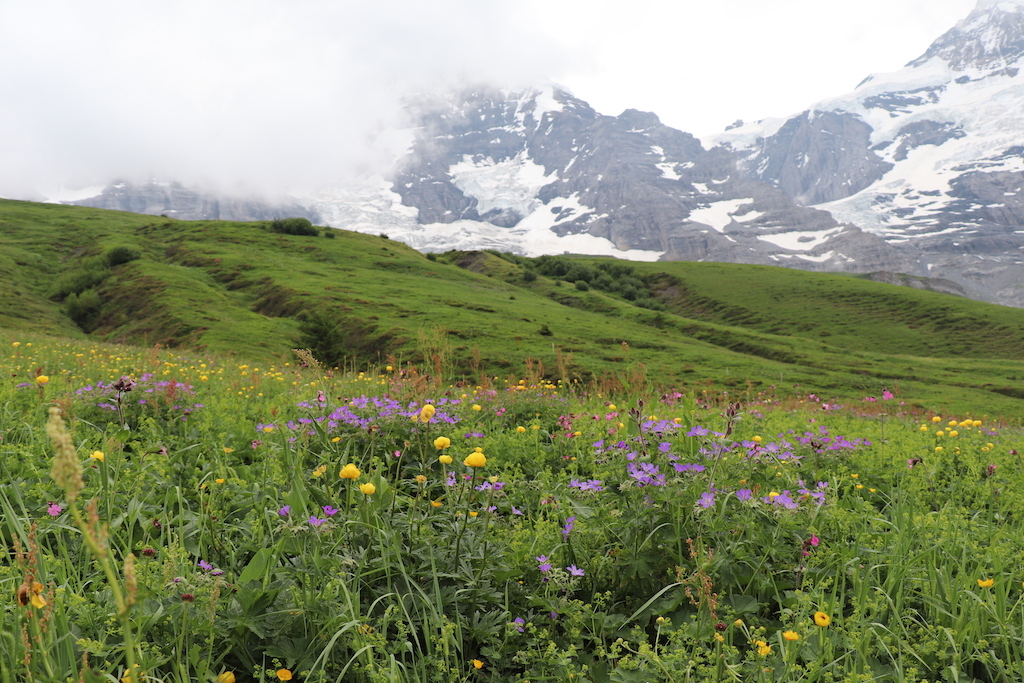 As we walked down the mountain, we enjoyed just being with each other in the fresh air.  At one point we crossed a cute stream.

Such a fun walk!  As we arrived we decided to take the train all the way down to Lauterbrunnen and skip Wengen.

On arrival in Lauterbrunnen, we stopped at cafe for drinks.  A delightful end to the afternoon.

After returning to Wengen, we stopped by the grocery store to pick up fondue supplies and had a delightful dinner back at the apartment. 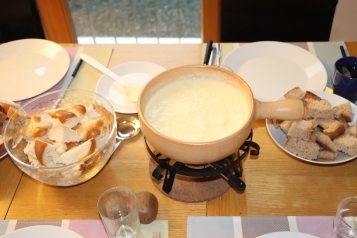 In the evening, we enjoyed beautiful views of the valley from our deck. 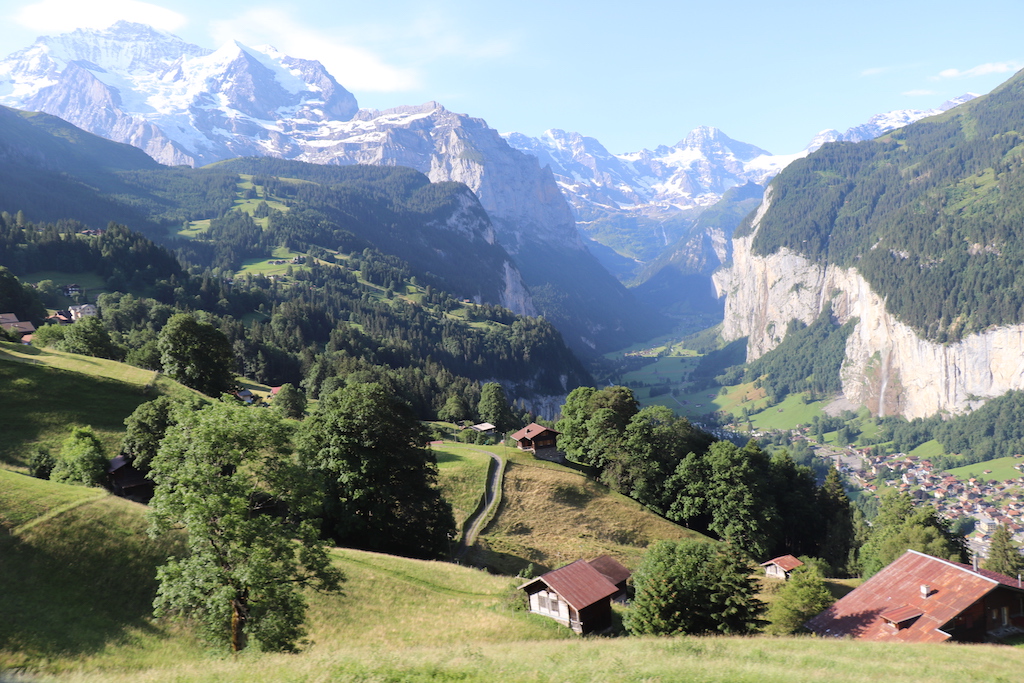 One consequence of traveling over the 4th of July weekend is that the kids often miss the fireworks and American traditions, but we still had a really nice day, if a little different than most American kids expect.

Planning a trip to Schynige Platte, we decided to get an early start, since it takes close to 2 hours.  First, we caught the train down the mountain to Lauterbrunnen, then changed to the Interlaken train, but got off early at Wilderswil.  From there, we switched to the often-crowded cog train up to the top of Schynige Platte.

We were really hoping that the boys would be interested in doing the Faulhorn hike from Schynige Platte to First, but neither of them were excited about the exertion that would be required.  This is an epic and fairly intense hike that has significant elevation gain and takes the local senior citizens 6 hours 10 minutes.  8 years ago, it probably took us close to 8 hours, which says something about the local population.  Even though this hike was taken off the list, there are still plenty of other things to do at Schynige Platte.

After getting oriented, we split up once again.  Mom, Dad, and James would visit the beautiful Alpengarten (Alpine Garden), visit the small playground, and maybe do a little wandering on the start of some of the trails.

Jeremy, John, and I decided to do the Panoramaweg Laucherhorn (Panoramic Trail), which is a 2.5 hour loop.  Both the beginning and end were a bit steep, but overall, it wasn’t too difficult.

The trail was quite crowded until we reached the Oberberghorn turn-back.  If you are looking for a 1 hour 15 minute hike, consider doing this shorter loop.

But we wanted to hike further, get out of the crowds, and get more views of the lakes down by Interlaken.  The one in the picture is the Brienzersee. 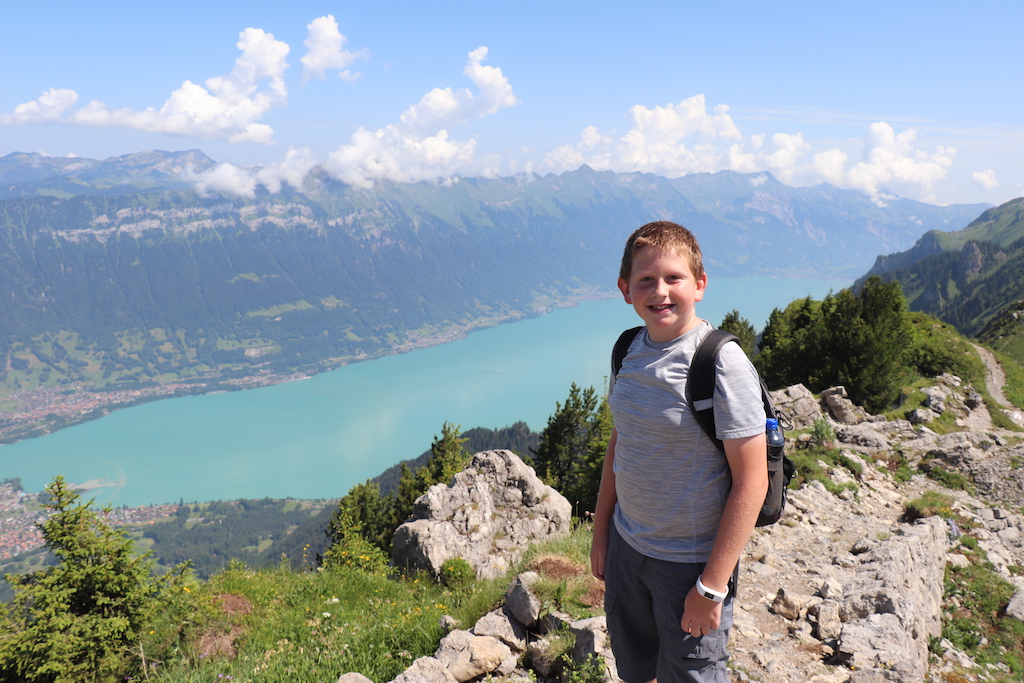 John really enjoyed scrambling over the rocks and admiring the towers that various people had built.

This was a new trail for us, and we were delighted that we had found it.  Definitely a new favorite hike!

The views were simply incredible! 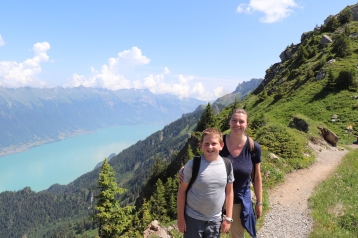 Not finding very many benches along the path, we decided to eat our picnic lunch on some rocks. 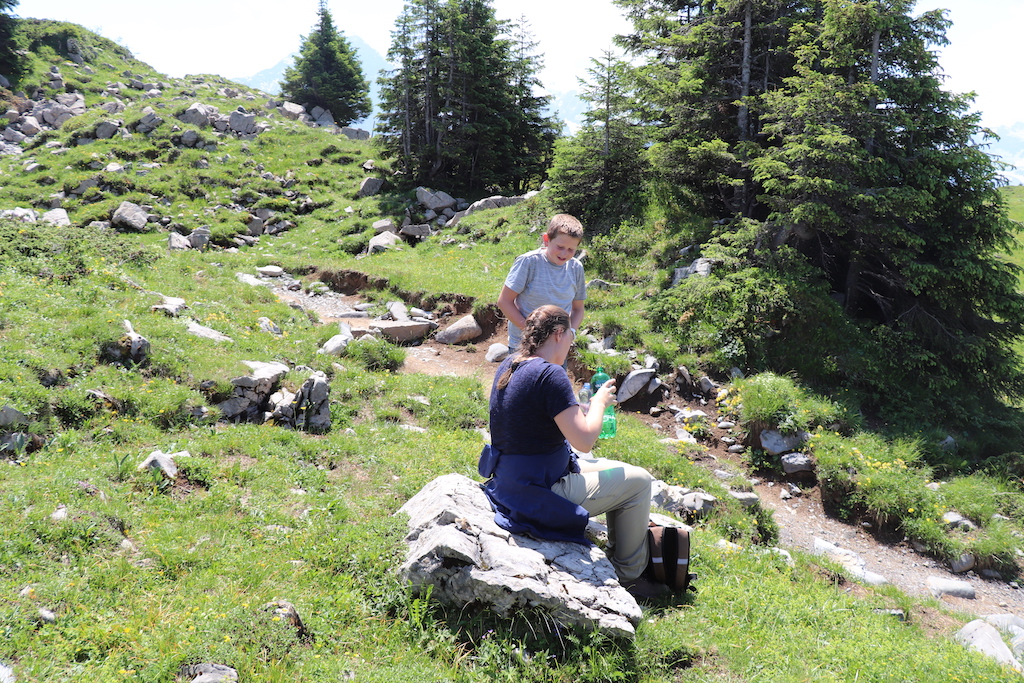 What an amazing hike!  On the way out, we made a quick stop at the Alpengarten, but didn’t want to miss the train down the mountain, so didn’t linger.

On our way back to Wengen, we decided to stop in Lauterbrunnen for treats.  John really likes the ice cream at Flavors, so we decided to humor him.  They also have coffee and Swiss Ale, so all of us were happy.

Again, we stopped by the grocery store in Wengen to pick up dinner supplies.  John decided that he would be in charge of dinner and picked out both sausage and a black forest cake.  John did an awesome job on the sausage!

After dinner, we discovered that the cake was quite terrible, so we took a walk into town to get a dessert that people actually wanted to eat, delicious vanilla ice cream.  After a nice walk, we spent some time on the deck with a nice glass of wine from the Valais region of Switzerland.

Jungfraujoch, billed the “Top of Europe,” is a place that’s worth visiting, ideally on a really clear day. It’s the highest elevation train station in Europe, with plenty of attractions put together there, and is quite a nice marvel of both nature and engineering. For folks who come to the area for just a day, this is often the main attraction.

That said, Jeremy and I have been there a couple of times, it’s only partly covered by our passes, and honestly we were more interested in hiking.  So we decided to split up again – Mom, Dad, and James went to Jungfraujoch, while Jeremy, John and I went hiking.

Jeremy, John, and I wanted to do the Romantikweg hike from Männlichen to Alpiglen, so we made our way to the Wengen gondola station and took the exciting ride up to the top, where John spent some time enjoying the playground.

As we started, we enjoyed being in the fresh air.  This trail isn’t known for its panoramic views, but rather for the wildflowers and beautiful mountain landscape.  At one point we hit a small forest.

John and I particularly enjoyed photographing the wildflowers. 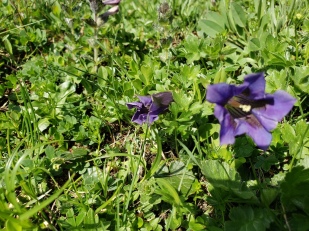 John loved the butterfly that landed on him. 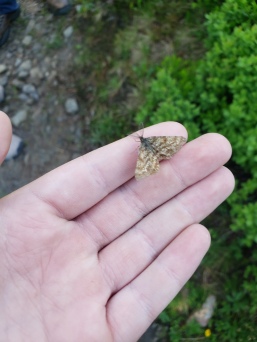 And the views of the mountains are always nice. 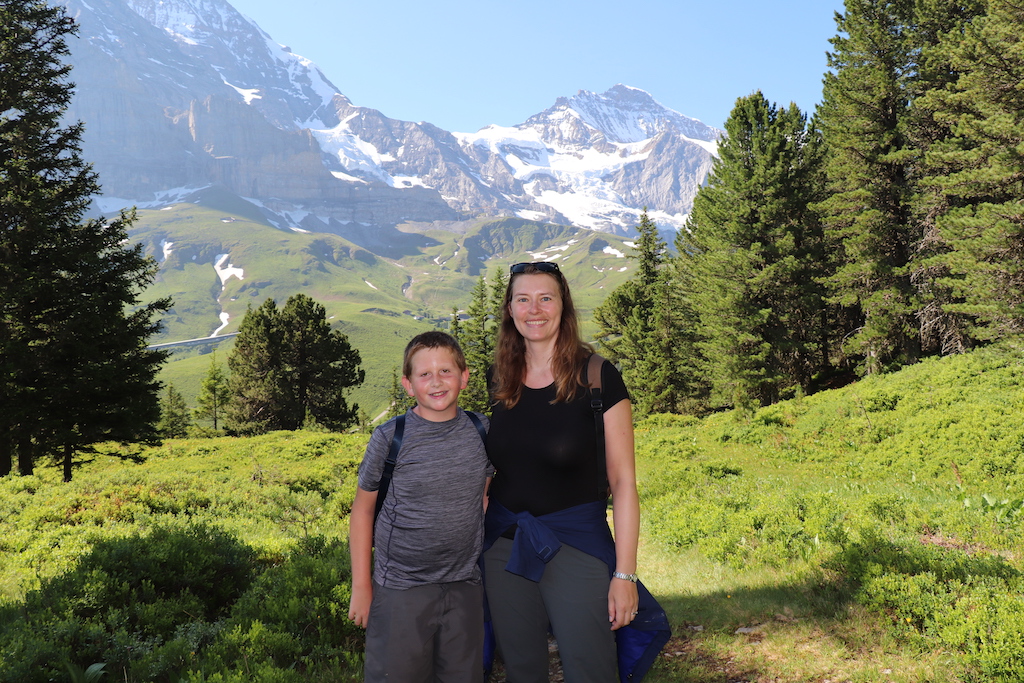 As we got closer to Alpiglen, John was delighted with the cows.  Sometimes the cows are on the path, but fortunately, this time they were a little off and we didn’t need to worry about how to get around them without upsetting them.

John really didn’t like turning his back on them, so Jeremy got a few pictures of me instead.

After arriving in Alpiglen, we considered hiking down to Grindelwald, but we had done that a few years ago and didn’t enjoy it as much, so we decided to take the train up the mountain to Kleine Scheidegg.

Hike From Kleine Scheidegg to Wengeralp

The inexpensive sausage stand in Kleine Scheidegg that we like to eat at was quite crowded, so we decided to seek out other food and decided to take the short, half hour walk to Wengeralp and check out the restaurant there.  Good choice!

The views were stunning!  And the flowers were beautiful!

I was quite pleased with my meal!

Chess in the Park

From here, we decided just to take the train to Wengen, rather than taking the long walk down.  Once we got to town, John decided he wanted to play chess in the park.

What a great end to our trip!  We headed back to pack up and decided to have fondue for one last dinner.  I was feeling a little sad about needing to leave in the morning, but was really happy that this area of the world never disappoints!