A Week in Paris with Preschoolers: Part 2

As we continue to reflect on our first trip to Europe with two preschoolers and without help from the grandparents, we proceed with our mid-week activities. On our third day in Paris, we decided to leave the stroller at home and do a few activities that are best with preschoolers on foot. On our fourth day, we had planned a day trip to a nearby town, but there was a train strike and we didn’t want to risk getting stranded and made some low-key alternative plans.

Leaving the stroller at the apartment, we set out to try a few things that the stroller made inconvenient. On this day, we wanted to climb the Arc de Triomphe stairs and do a Seine River boat tour. Our afternoon was open to more low key activities, so we mostly just hung out near our apartment, enjoying the Luxembourg Gardens, visited St. Sulphice, and walked around the St. Germain neighborhood.

We decided to ride the metro to the Arc de Triomphe while the boys were still fresh and not tired of sightseeing. Our kids climbed the stairs all the way from the bottom – one of them took it as a challenge and ran most of the way up, the other was a bit more overwhelmed.

The views from the top are quite nice, so take the climb if you are up for it! 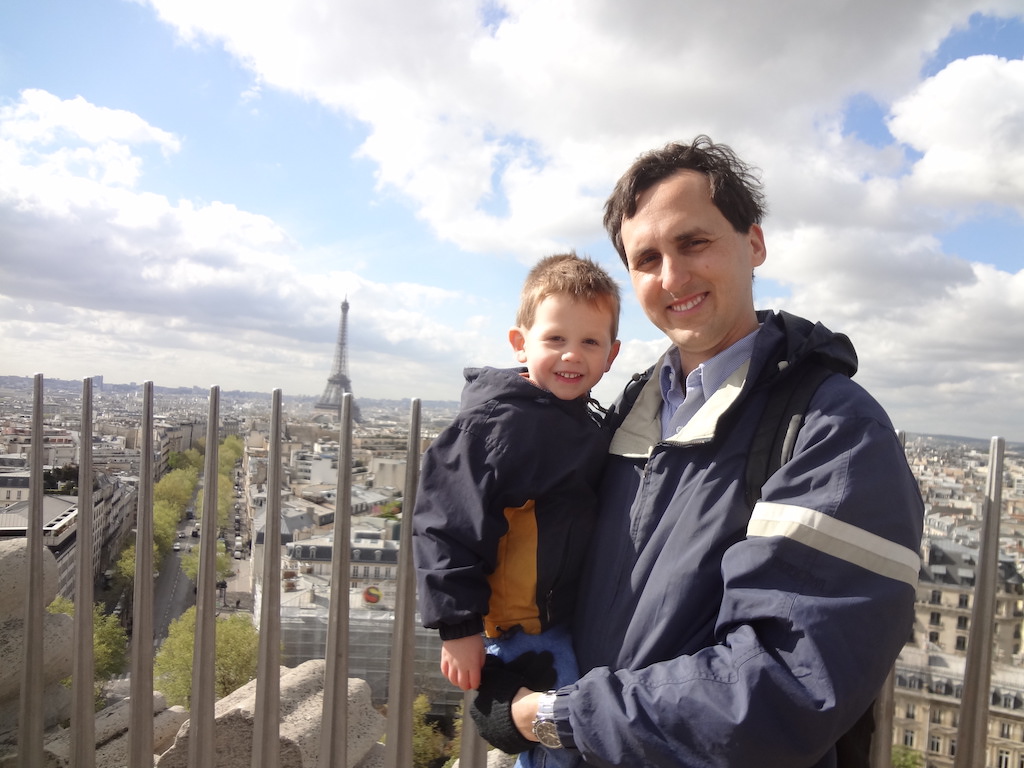 We then headed towards the Seine and found a Seine boat tour that was recommended by our guide book. We thought it would be a great activity where the kids could rest a bit and we could enjoy the scenery. Boy, were we wrong!

The boys were tired and a bit cranky. While the boat ride was only an hour, keeping them cooped up on a boat for even that was work! In addition, Jeremy and I were still a bit jet-lagged and sitting down made us tired to the point that we just wanted to sleep. It seemed like a good idea, but maybe at another time… 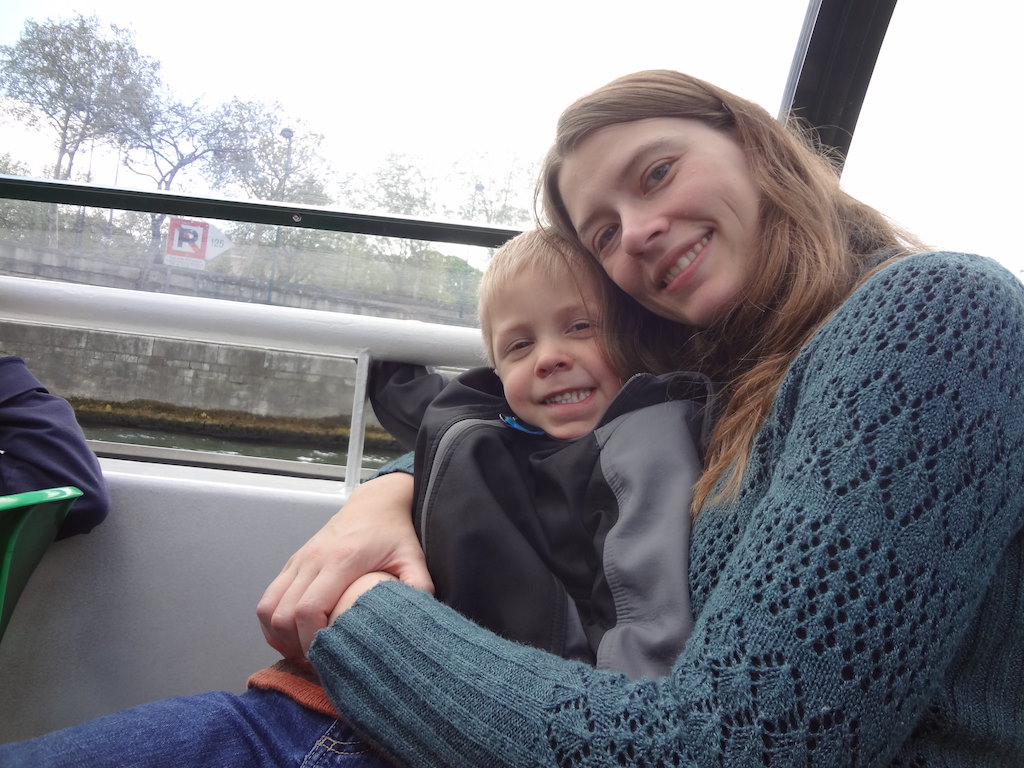 After the boat tour, we stopped for lunch and wandered down Champ Elysées, which we had missed due to an event the day before.

After picking up the stroller, we decided to wander through the Luxembourg Gardens. Quite pleasant! 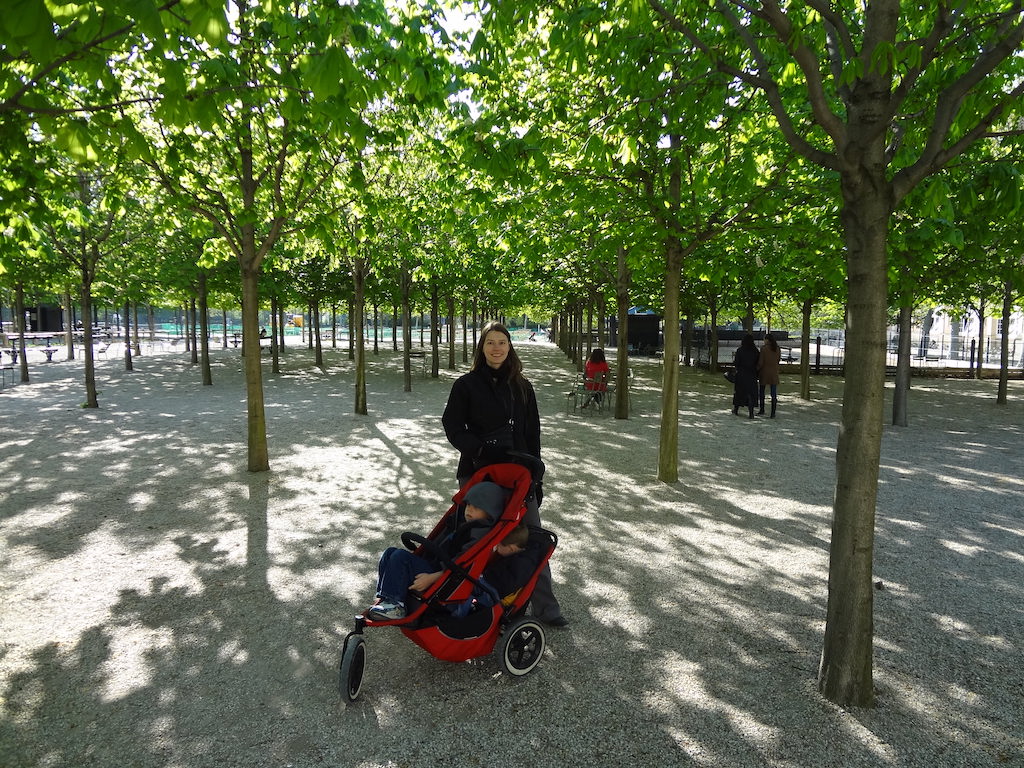 The boys were tired, so they mostly just sat in the stroller, but every once in a while they would hop out if they saw something they liked.

Afterwards, we wandered to the nearby Church of St. Sulphice. Pretty, but none of our pictures turned out. We also spent some time wandering through the St. Germain neighborhood. The boys were quite tired at the end of the day.

We had planned to take a day trip to a nearby city, but France is famous for train strikes, and we managed to be visiting on such a day. So, we altered our plans to include, a walk by the Panthéon, wandering the Marais neighborhood, a visit to the Pompidou center, and a walk to the Bastille, and a wander on Rue Mouffetard.

We took a closer look at the Panthéon, since it was on the way and not far from our apartment.

Afterwards, we continued on to the Marais neighborhood in the right bank, which is a trendy area that has more locals than tourists. There are a few museums, but our goal was more to simply absorb the atmosphere.

We didn’t think the boys were up for a full visit to the Pompidou modern art center,  but we did walk by the lively area outside again. The boys like the large fountain outside.

Wander to the Bastille, Lunch, and Eclairs in the Afternoon Rain

From here, we decided to take a wander to Place de la Bastille, stopping at a nice fountain for pictures. 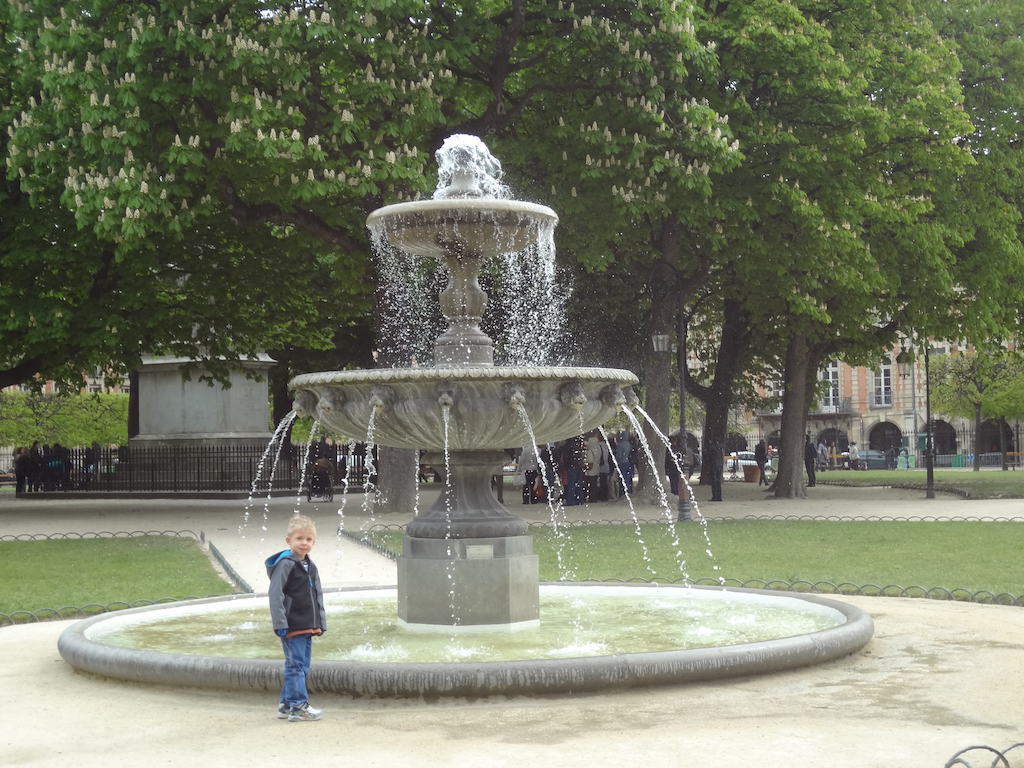 Then it started raining, so we quickly found a restaurant to pop into. The boys got their usual steak haché and fries – basically a hamburger without the bun with french fries, but James decided to try some of my pâté and really liked it! When in other countries, you should order the kids something they are likely to enjoy, then have them sample more adventurous foods from your plate. They might surprise you in what they order at the next restaurant!

The rain lightened up a bit, so we decided to walk to Rue Mouffetard, which is a fairly lively street that often hosts a market. On the way, we stopped for eclairs, at which point Jeremy and I realized the ridiculousness of the situation. We were pushing a double stroller up a hill in the rain, all while the boys were happily munching on eclairs. Something is wrong with this picture…

Sick of the rain and since it looked like the subway was running, we hopped on a train to Montparnasse, where we knew there was a big indoor mall.

After the kids started getting tired again, we decided to walk back to our apartment. The kids had a lot of fun wandering through the Luxembourg Gardens, but when we realized how muddy they were, we had second thoughts about the wisdom of this idea. Fortunately, we had a washing machine available in the apartment. Even though it took 4 hours to do both was and dry, it was a blessing. When traveling with small children, either bring a ton of extra clothes, or make sure that you will have access to a washing machine!

I had been coming down with a cold and the kids were tired, so Jeremy went back out on his own to find us crepes or some pizza slices that he could bring back to the apartment. We enjoyed simply spending an evening relaxing.