After spending 3 nights in Nice, France during our 2012 trip, we picked up a rental car and made our way to Avignon, about a 2.5-3 hour drive. As it turns out, I liked Avignon a lot better than Nice. Nice is a big city with lots of beautiful, but somewhat rocky beaches. Avignon is a small inland medieval town with much more charm. Given that Jeremy and I are more into cities with amazing architecture, Avignon was a much better fit for us. 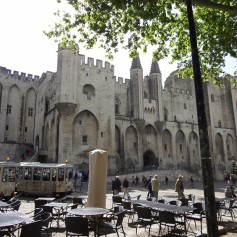 Our morning started in Nice, where we picked up a rental car. Since it was a manual transmission (common in Europe), there was no way that I would have been able to drive it, plus driving in non-English-speaking countries is not something I really wanted to do. Jeremy enjoys it when he isn’t sick, so we have taken quite a few international road trips over the years.

On the way to Avignon, we decided to spend a few hours in Arles. This was a fairly important city in Roman times, and even holds an amphitheater modeled after the Colosseum. If you want to get an idea of what the Colosseum may have been like back in Roman times, bull fights and other performances are still held there today.

As we wandered, we spent a lot of time admiring the architecture.

Beyond just Roman-themed sights, this is also a city that Vincent van Gogh lived in for a year. Since it was towards the end of his life, when he was starting to go a bit crazy, some of his most famous stuff happened here. Not only were some of his most famous paintings created in this town – around 300 were painted here, it is also the place where he cut off his left ear.

Eventually, we made our way to Avignon, parked the car in a city lot, and walked to the hotel that was managing our apartment rental to pick up the keys. The boys seemed to like the apartment a lot. 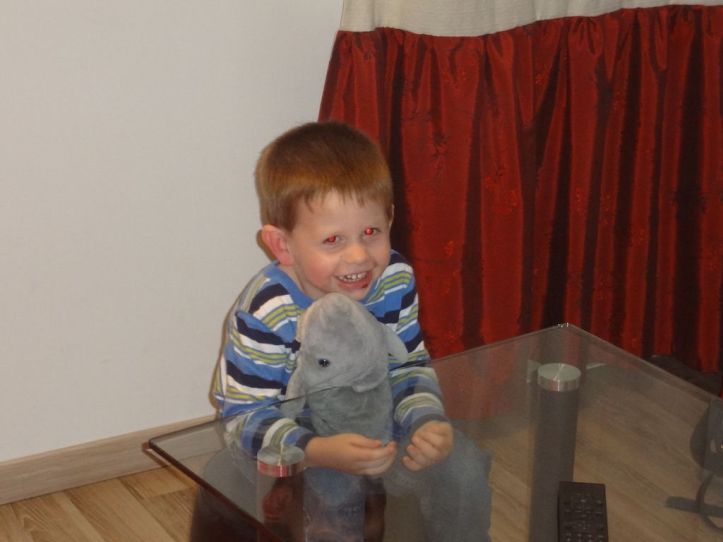 After getting settled, we went out to find some dinner, then made an early night of it.

Palace of the Popes

In the morning, we decided to go see the Palace of the Popes, which is prominent architecturally in the city – it was hard to miss on our way in the previous day.

The history of this palace is quite interesting. In 1305, Clement V, a Frenchman, was elected to become pope. The people of Rome did not like this and made the pope’s life quite miserable. As a result, he decided to move the papacy to Avignon, where it stayed for 70 years. Since he installed other Frenchmen as cardinals with a lot of power, it was most likely that the next pope would also be French.

Eventually, Gregory XI moved the papacy back to Rome, even though this was not desired by the French cardinals. The next pope, Urban VI, upset the cardinals so much that they elected a second pope to replace him. Of course, some people decided to support the old pope and some the new pope. Chaos ensued for about 40 years. In 1417, Pope Martin V was elected, satisfied both sides, and the division in the papacy ended.

Eventually, we made our way to a park overlooking the Rhone River, with beautiful views of Pont Saint-Bénézet, a half bridge.

All of us really enjoyed our time up here. 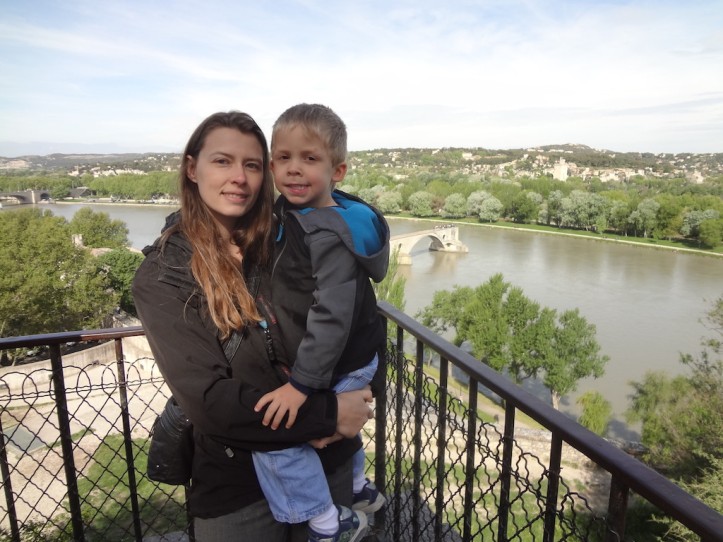 There were also nice views of the city.

As we made our way back to town, the kids were getting a bit cranky, so we decided to stop for a carousel ride. 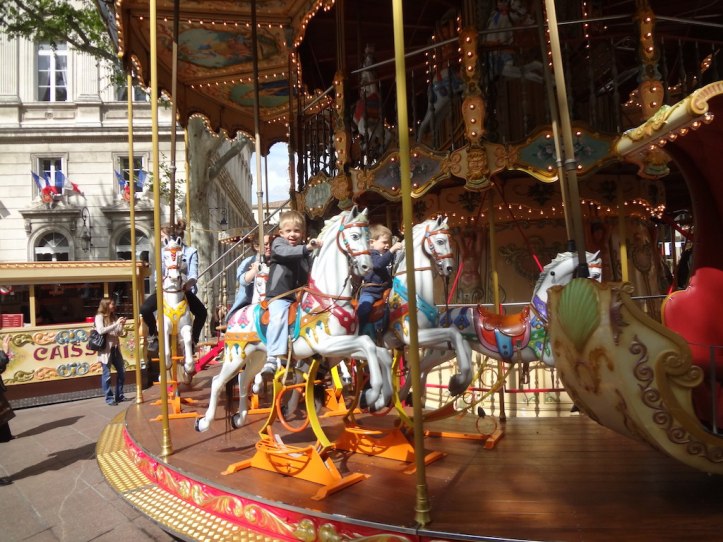 They settled down for a while, but they were a bit crazy for most of the day.

Sometimes traveling is easy with kids, other times it is hard. The last few days have been a bit harder than normal, probably due to the mild illness.

For dinner, we decided that we didn’t want to deal with cranky kids in a restaurant and picked up a lasagne at the grocery store to cook in our apartment. When traveling with children, an apartment can really improve your stay!

On our last full day in Avignon, we decided to take a day trip to Pont du Gard, Nimes, and Uzes. All were quite nice, which we’ve written up separately.

Pont du Gard was a famous old Roman aqueduct bridge that we enjoyed hiking around, Nimes had a lot of nice Roman ruins – including another amphitheater that occasionally has bull fights and other performances, and Uzes was a nice, if minor, town that we enjoyed.

You can read more about this day trip in a separate post.

In the morning, our stay in Avignon came to a close, we checked out, and made our way to Aix-en-Provence!