Today, we took a day trip to the ancient city of Pompeii.  Amazing!  I was completely unprepared for the size.  For some reason, I pictured a few ruins and some museum artifacts.  Instead, there was a massive city.

In 79 A.D. Mount Vesuvius erupted, pummeling it with lava and eventually covering Pompeii in 13-20 feet of ash.  Most people died from suffocation from the ash, others died from the heat.  Others died from being trapped in the lava flow.  Most of the people who survived were the people who recognized the signs of the coming volcano and fled.  Out of a town of 10,000-20,000, approximately 1,500-2,000 died.  The city was abandoned and was preserved by the ash until it was rediscovered in the 1599, although excavation didn’t truly begin until 1738.  When they were excavating the lava flows, there were person sized piles of ash.  Here is an example of what they found when they poured plastic into the holes.  It’s really quite horrifying to think about the people running from the 100 mph lava.  The models that showed someone peacefully sleeping, while still horrifying, looked much more pleasant.  For whatever reason, the boys found the model of a dog fairly interesting.

The forum was fairly interesting.  There were some fairly well preserved columns and statues.  And an amazing view of Mount Vesuvius. 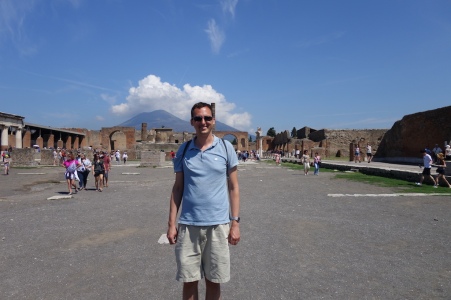 On one end was the Basilica, which was also quite interesting.

Walking down one of the main streets, James and I had a lot of fun trying to describe what may have been in each of the shop fronts.  Another street had some tables with round holes in them.  James first guess was a toilet, but they were a little to high and public.  It turns out that they were actually used as the Roman equivalent of a fast food restaurant.  There were tons of building that we could duck into.  We found the baths, as well as many other buildings.  Some of the mosaics on the floors were also surprisingly well preserved.

The amphitheater was amazingly well preserved and is considered an earlier version of the Colosseum in Rome.  It is a long walk, but well worth the effort to see it.

With the outside that well preserved, it was no surprise that the inside was also quite nice. 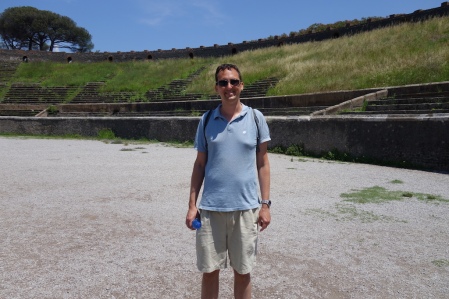 The boys had a lot of fun scrambling around the ruins, although all of us were a big surprised by how vast it was.

After 3 hours, we were all exhausted, hot, and hungry.  If I would have realized how big it was, I would have packed some granola bars and we could have kept exploring.  But everyone was becoming a bit cranky, so we decided to head for the exit. 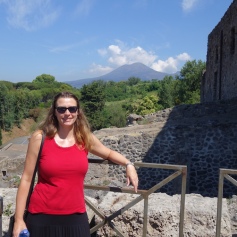 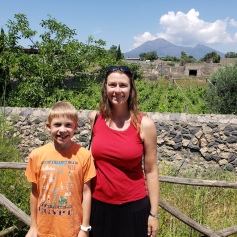 Just outside the Pompeii ruins were a bunch of pushy vendors.  We found a nice looking pizza stand and I had some of the most delicious eggplant pizza I have ever had.  I really need to make more eggplant when I get home.  Too bad no one else in the house likes it.

The way back to Sorrento was much more pleasant that the ride to Pompeii.  On the way there, it was supposed to be a half hour, but the train kept losing power and had to “reboot,” so it ended up taking closer to an hour.  We have also noted that the train schedules are mostly fictitious.  They seem to leave whenever they feel like.  On arrival to Sorrento, the boys had a lot of fun leading us down the alleyways to our apartment. 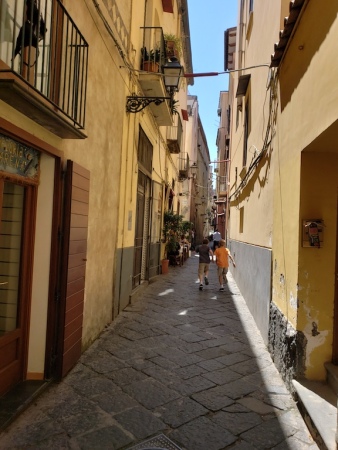