If you ask the boys, this was probably their favorite day while in India.  I enjoyed it immensely, and regardless of whether or not you are traveling with children, it should be high on your list of places to visit while doing a loop in Rajasthan.

We left our Bikaner hotel at 9:15am, and along the way made a stop at a desert reserve that had some nice birds that were migrating south from Siberia.

Of course, our driver though it would be funny to joke about a “snake hole,” and after I jumped about a mile, John thought it was hilarious to repeat.  Unfortunately, my fear of snakes is very real, is the reason that I always said I would never visit India, and I almost had a panic attack.  Fortunately, we never spotted one. 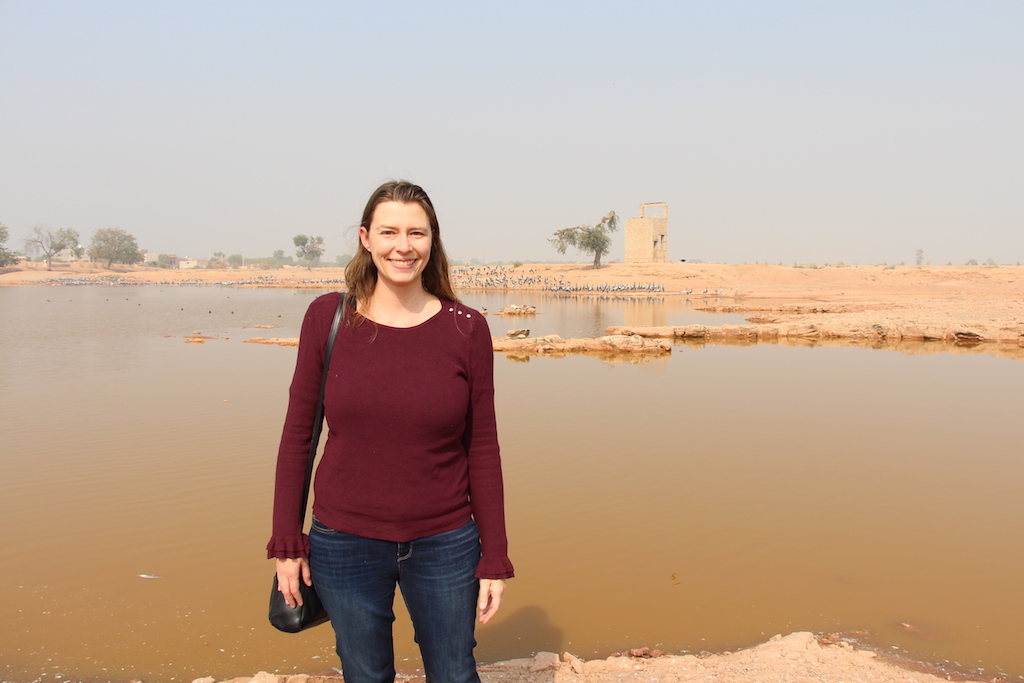 By 1:30pm, everyone was famished and we made a stop at a restaurant that (according to both our driver and the pictures on the wall) Bollywood stars stop at.  My guess is that the movie stars only stop there because there is nothing else for miles – it wasn’t awesome.  The naan was thick and tough and the dal makhani tasted very sour (maybe spoiled yogurt).  On the other hand, the butter paneer and the biryani were passable.

We arrived in Khuri a little before 5pm, where they showed us a few lodging options at Ragisthan Guest House. Then we headed straight towards the camels to start a sunset tour through the desert.  Wonderful!

This was also the first time that James has truly enjoyed riding an animal. 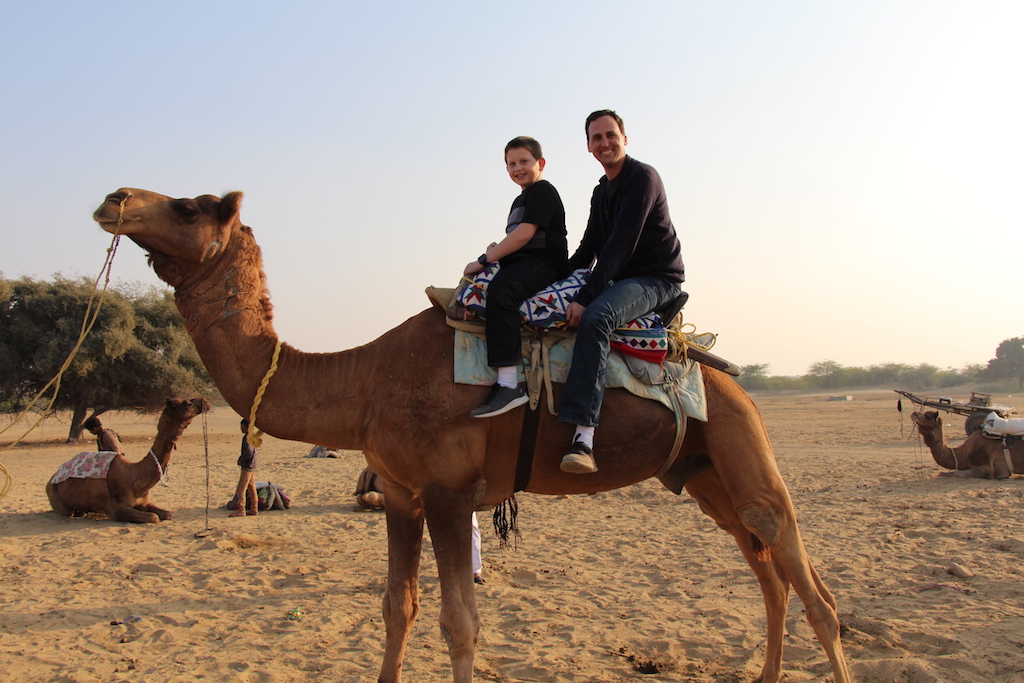 Getting up and down was quite scary, as the camel starts from a lying down position, then rises its front up, then its back.  Getting down is in the reverse and far worse since you feel like you are plummeting face first towards the ground.

The trip out to the desert was peaceful and quite scenic. 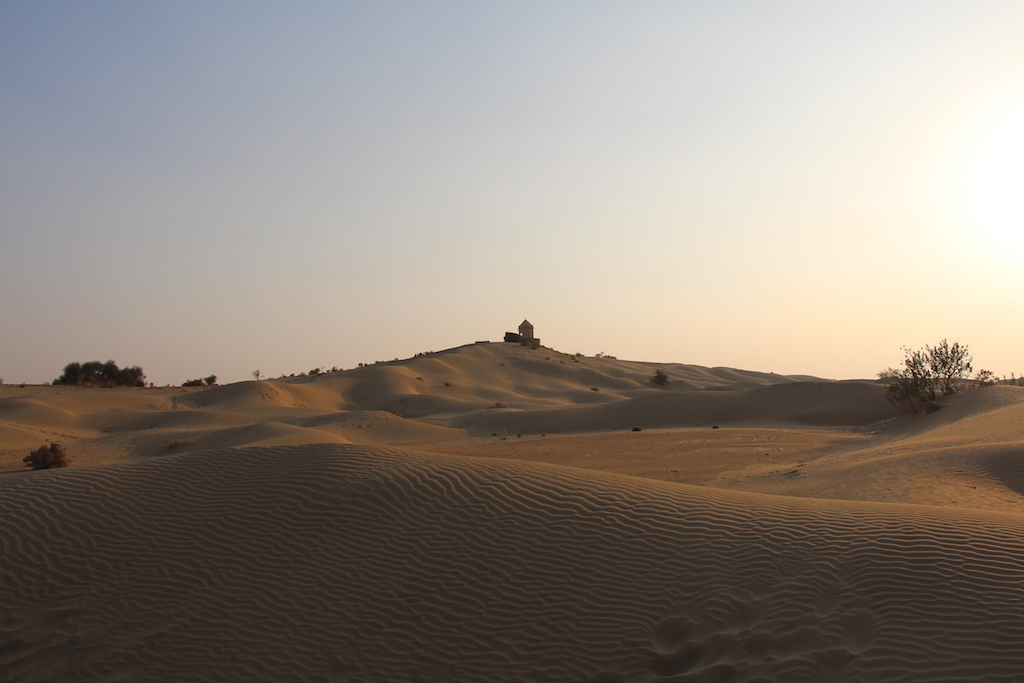 Halfway through the ride we stopped and watched an amazing sunset.

The boys enjoyed rolling around in the sand. While I was a little concerned about scorpions and snakes, they told us that such critters shouldn’t be a problem, so we let them have their fun.  John was overheard to say, “James, this is better than the beach!” 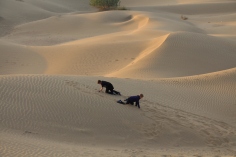 We spent close to 40 minutes there, then took the journey back. 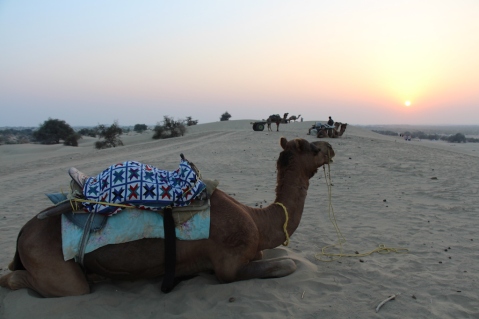 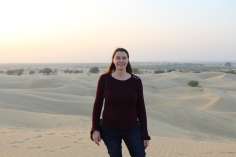 Going downhill at slightly faster speeds was a bit scary, but we made it.  John ended up hurting his leg a bit on the dismount when Jeremy flew forward and smashed John’s leg into the horn.

Walking back, we noticed that there was an area of sick camels.  From what we saw, the handlers were treating the camels fairly well while we were present.  I wonder how they are treated when tourists aren’t around, and what their food source is like.

After returning, we told the hotel staff that we had decided on the “Swiss tent.”  There was also an option for a hut with a thatched room, but we were afraid that critters would be more likely to come in.

We then went to dinner where there was music, a dance performance, and a wonderful vegetarian buffet.  For those of you who know Jeremy, you can probably imagine his horror of having two meals in a row without meat, but he actually enjoyed it.  They had a super spicy dish that I loved.  The boys enjoyed the appetizer of peanuts and some sort of rice chips that reminded me of pork rinds, but that obviously weren’t since everything was vegetarian.  James seems to be getting most of his calcium through the very delicious masala tea, but I guess there are worse things.  Trying to get calcium into John has been a challenge, but at least it is only two weeks.

I really enjoyed the dancing.  The woman was quite talented.

After returning to our tent for the night, we discovered that there was a bottom sheet and some very warm, but not-so-clean looking blankets.  Since there was no heat, we were a bit worried about only having one each, so we talked to the staff and got a second sheet and another blanket for each person.  This proved to be a theme while in India.  For whatever reason, the top sheet was missing at quite a few hotels.  Fine if you have a washable duvet cover.  Not so fine if it is a soiled blanket that obviously hasn’t been washed in at least a year.

We decided to take a shower to wash the sand off the boys, but discovered that there would be no hot water until 7:00 AM.  The staff offered to heat up a bucket of water, but the boys seemed perfectly happy going to bed sandy, rather than taking a sponge bath.  Honestly, they were much cleaner than most of the other kids we have seen on this trip.  And, it really is good for the boys to find out that most of the world doesn’t have basic things that we take for granted.

Our morning started with a short walk, followed by an incredibly delicious breakfast with puri, a nice Indian bread, that everyone enjoyed.  According to our driver, it has corn and wheat flour and was fried until it puffed up.  There was also a really nice, spicy soup, bread, butter, jam, and fruit.

After breakfast, there was finally hot water, so we were able to shower.  It was kind of funny that our first shower of the trip with both hot water and decent water pressure was while we were camping in the desert. The shower was on a pole in the center of the large bathroom, the floor was concrete, the walls were canvas, the beds were more like cots, but it was a very nice shower.

That said, having a shower was probably an unusual treat for this area – we saw some locals carrying large jugs of water on their heads, probably from the local well, as we were driving away from the city.