Still looking back in time, we had another fabulous day in Budapest, a beautiful city on the Danube.

Our morning started with a fairly reasonable hotel breakfast.  The kids had trouble picking out food they would be happy with, but eventually they settled on some toast.  With travel, food doesn’t always look exactly like it does at home, which can be particularly difficult for kids.

After breakfast, we hopped on the subway and went to City Park, making sure to stop at Heroes’ Square, with various memorials. The subway line out to the park had a somewhat vintage Soviet-inspired feel to it. 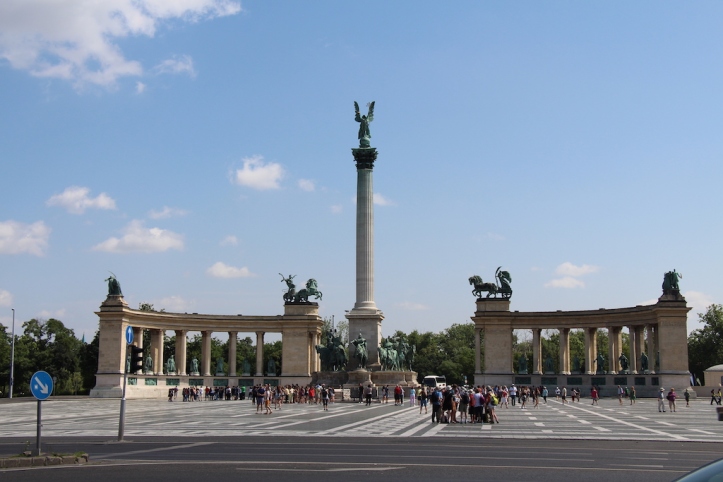 Not far from Hero’s Square, we found the Vajdahunyad Castle.  Since we had little interest in paying money to see the Hungarian Agricultural Museum, housed on the inside, we decided to stick with the free courtyard and wandered the grounds a bit.  Beautiful!

Nearby was a little chapel that we ducked into.  Reasonably simple, but the stained glass windows were very nice. 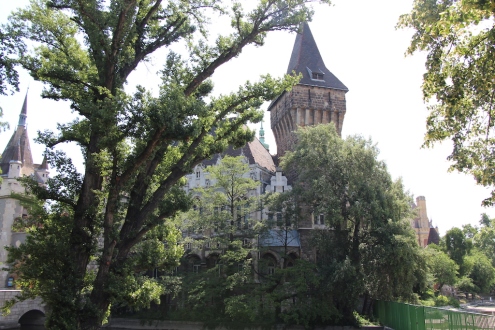 As we continued through the park to the Széchenyi Thermal Baths, the boys saw a playground and trampoline park, so we decided to stop.  One of the best parts of traveling with kids are discovering the differences between playgrounds in various countries. 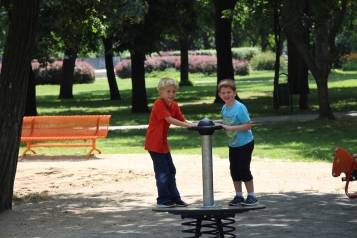 Afterwards, the kids had their first of three ice-cream cones for the day.  They were both small and fairly inexpensive. With all the walking they would be doing, we figured it wouldn’t hurt them and would keep them happy.  Plus, they don’t do well with foreign milk (fat percentages and diet of the cow are often different than they are used to), so this would give them at least a little extra calcium.

As we arrived at the Széchenyi Thermal Baths, we were able to see the beautiful exterior, but given that the recommended age to enter the baths is 14, we didn’t feel like we should go in.  Would have been fun, but there is always next time. If you don’t have young kids along, this is a place most people visit. 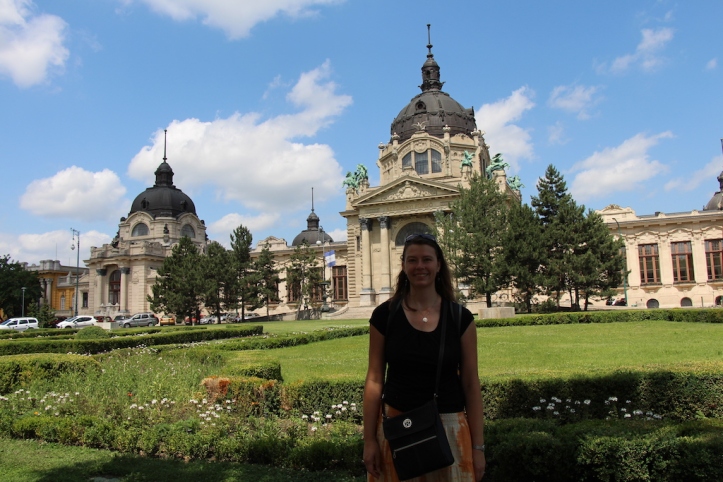 For lunch we decided to wander down Andrássy Street and stopped at a Falafel shop, a first for the boys.  James wasn’t a fan, but John decided they were okay if the salad and sauce were scraped out.  When traveling, we encourage the kids to eat what they are given, but if they struggle a lot, we don’t make an issue of it and get them a snack an hour or two later to keep their blood sugar levels from getting too low.

After lunch, James saw the Embassy of Macedonia and got excited, so we took a picture.  Given his love of everything foreign, he fits into our family well. 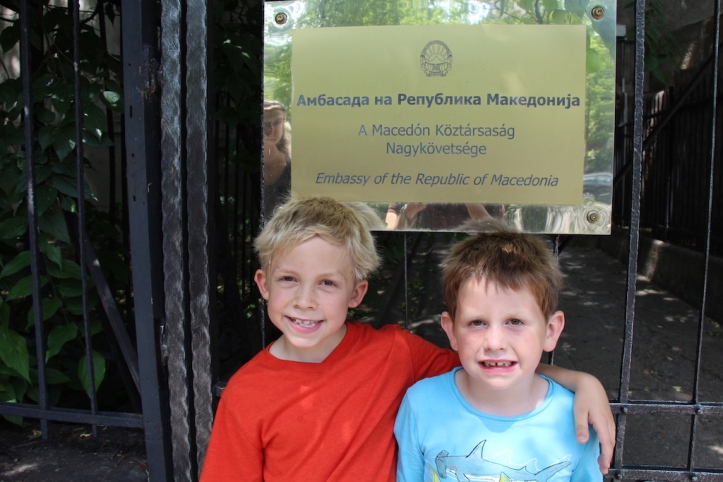 We ran into a thunderstorm, but fortunately it was short and we had umbrellas.  The walk continued through Liszt Square, then we saw the entry of the Opera House.  More ice cream followed.

The window of the Minversum, a model train museum featuring sights from Budapest and Hungary, caught the boys’ eyes, so we decided to go in.  Great choice!  The boys loved it.  And Jeremy thoroughly enjoyed looking at all of the old communist propaganda signs.

This led us back to St. Stephen’s Basilica, so we stopped in again.  Beautiful!

Our walk continued onto Váci Street, which was much livelier on a Monday than on a Sunday.

Close to our hotel, our final stop was at the Great Market Hall.  When we were here in 2005, I spent a lot of time admiring the handmade lace and embroidery.  I had the intent of actually buying some of it this time, but given that I had no idea where I would put it, other than in a drawer, I decided to skip that purchase again and simply take my memories with me.

On the lower floor, we wandered through the food section, the boys eyes wide when they saw some of the meat on display.  Definitely not as processed, and much more life-like than you would ever see in an American market.  Since the kids were getting hungry, we bought them a few treats that caught their eye.

I did decided to purchase some more Hungarian paprika, since my supply from 2005 was long gone.  I decided on 1kg (2.2 lbs) of sweet paprika (mild and like what you get in America) and 0.5kg (1.1 lbs) of hot paprika (very spicy).  Yay!  So delicious and highly recommended to bring home as a souvenir.  Just make sure you slip it inside a ziplock bag in case there is a problem inside your suitcase.

To Nap or Not to Nap

Given that we were just a couple of blocks from our hotel, I really wanted to take a nap, but Jeremy thought that if we fell asleep, none of us would want to get up again.  So we decided to “rest” at a Costa Coffee, a common European coffee chain.  John was completely worn out and thoroughly enjoyed the couch seating. 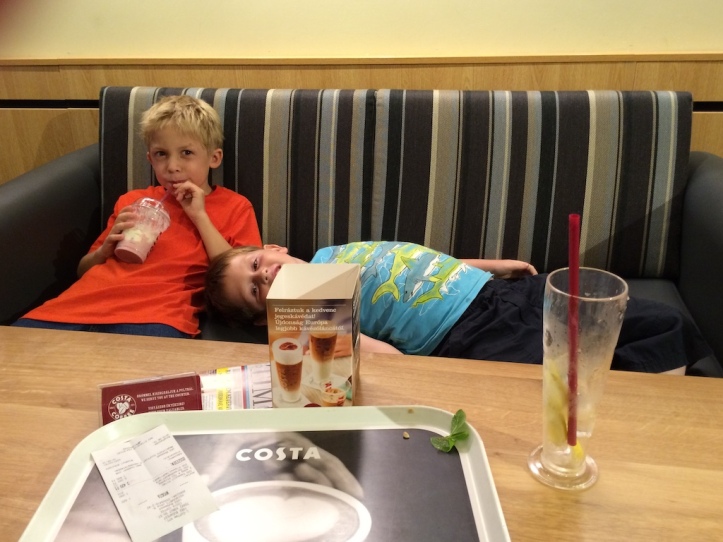 We were all struggling on the tiredness front, but we decided to take the tram to the Parliament buildings anyway.  Amazingly beautiful! 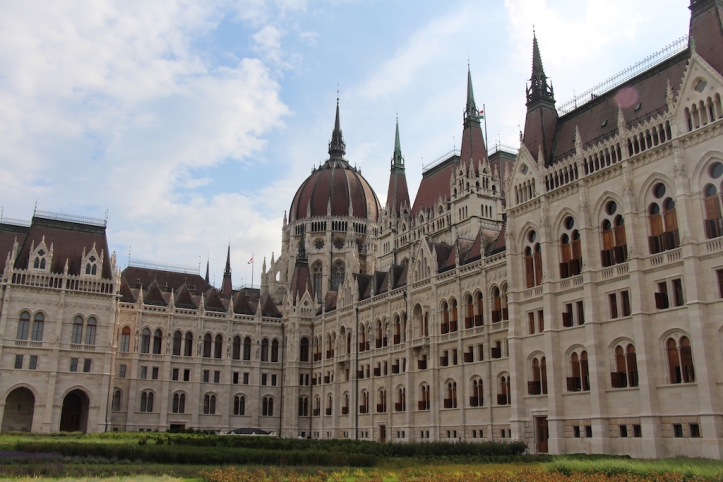 After seeing the Parliament buildings, we wandered a bit more, getting some very beautiful views. 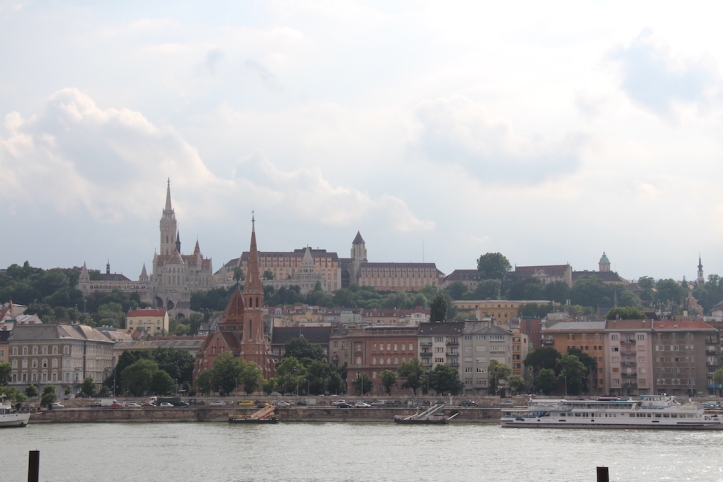 And more views.  So gorgeous!

When the boys spotted an Israeli restaurant that caught their eyes, we decided to stop again.  Delicious!  Everyone was very pleased with their meal, which was a first for the day.

After dinner, we decided to walk back to our lovely hotel, Residence Baron.  On the way, the boys spotted another playground, so we stopped to play.  Travel goes a lot better with children when you alternate the things that you want to do with the things that they want to do.  Everyone is usually happy with this. 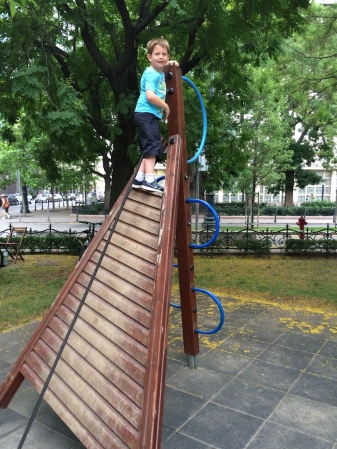 We were also happy to arrive back at the hotel and get some sleep.

This marked our last day in Budapest, with a late afternoon flight out.

Our morning started with a subway ride that dropped us near the bottom of Buda Castle Hill.  This time we decided to climb up, rather than taking the funicular. 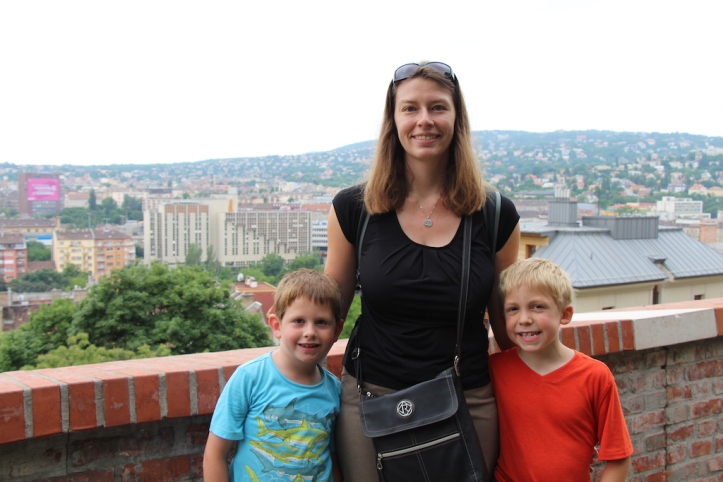 Once at the top, we wandered a bit, making sure to stop at Matthias Church.  So beautiful! 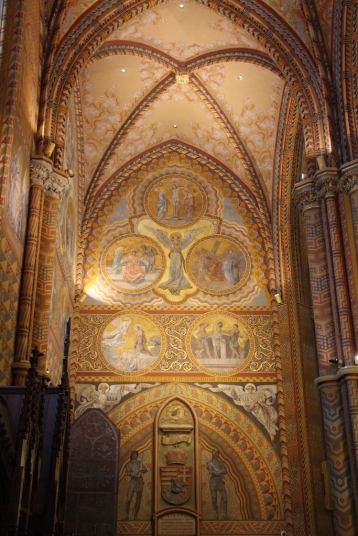 Definitely a highlight of the day.

We thoroughly enjoyed our time spent at the top of this hill.

As lunch was approaching, we decided to take the bus to the Oktogon area.  The lasagne we ordered was delicious!  Three of us loved it and the fourth had been picky all trip, so no surprise there.  The main surprise was the reversal in roles between the kids.  Our reluctant-traveler with picky eating habits was loving both the travel and the food, while our non-picky travel-lover was having a much more difficult time with everything.  You win some, you lose some.

After deciding against the Terror Museum (uncertain whether the boys were old enough) and the zoo (not sure we had enough time), we did some more wandering, then went to pick up our bags and caught a cab to the airport.

Note that the zoo is/was well worth visiting.  Here are some pictures from 2005 showing how close you can get to the animals (may have changed in the last 14 years).  Actual quote we overheard between a mom and child standing in a stroller seat: “Sweetie, we don’t pet the rhinos.”  To be fair, there was a double fence that was similar to the singe fence shown for the hippos, but still, it didn’t seem super secure.

What an amazing 3 days in Budapest!  On to Italy!