Still looking back a few years in 2015, we continued our travels into Rome, from Budapest.  Since we went to Italy again this summer, this was serving a bit as travel planning for me, but won’t be split up into separate posts as much as normal.  Look for some more detailed, up-to-date posts on Rome, Florence, and Venice in another few months or so!

After a delightful morning and afternoon in Budapest, Hungary, we took a 3:45pm flight to Rome. We had pieced together a cheap one-way plane ticket for this hop. Arriving an hour or so later, and getting our bags, we met a car that our apartment host arranged and drove into the city,

John had recently done a school report on Italy and was very excited to have finally arrived.  Once he woke up from his nap and realized that he was in Italy, he made a few nonsensical statements, then started looking out the window in earnest.  While still on the freeway, he wondered aloud, “Where are all the gelato stands?”  Um, let’s wait until we actually get to the city to see some of those.

Our morning started with the included breakfast at our apartment host’s restaurant, Pepy’s Bar.  Included was a choice of a plain, chocolate, vanilla cream, or some sort of fruit cream croissant, and a cup of tea or cappuccino.  So delicious!  James got really into the tea.

We then took the subway to the Colosseum.  One lesson that we learned in 2005 is that if you are not planning to take cabs everywhere, you should stay near a subway station.  This time around, we really enjoyed staying near the Barbarini station, but staying near the Spanish Steps (Spagna station), probably would have been nice as well, although as the name implies, you will have a lot of steps to climb to get to the train station.

So cool!  Upon entering, John was a bit disappointed that he wouldn’t be able to see one of the tiger fights.  Um.  Yeah.  But the interior was still really cool, if quite crowed. 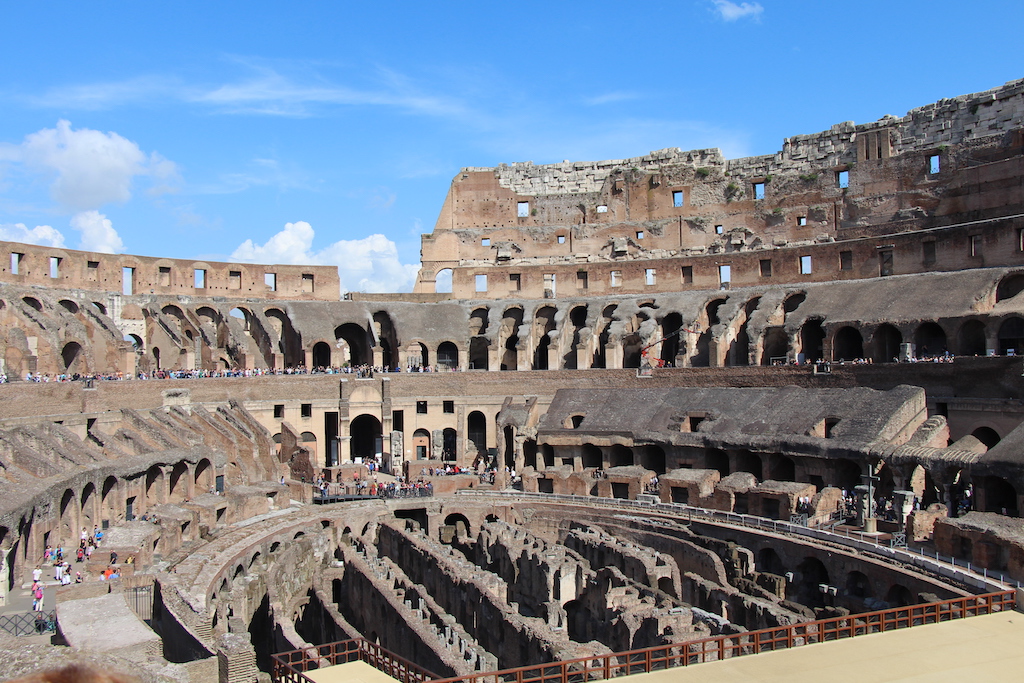 We spent an hour or so wandering and exploring, getting some nice views both inside and out. Lines and crowds weren’t excessive, but we got there close to opening time.

From here, we continued to Palatine Hill and the Roman Forum, stopping to get some snacks from one of the sidewalk vendors on the way.  James was very pleased with the largest sugar doughnut that he had ever seen.  And John finally got his gelato.

Palatine Hill was quite interesting, a desired place to live back in Roman times and had both ruins and peaceful trees.  So much less crowded that either the Colosseum or the Roman Forum!

The Roman Forum (market area) was quite massive.  Unfortunately, the kids were already wearing down from walking around the Colosseum and Palatine Hill.  At least the snack made is so they weren’t completely melting down.  When traveling with kids who are walking, I highly recommend getting them a snack and plenty of fluids every couple of hours.  Everyone is happier when their blood sugar isn’t out of whack and they have energy to keep going.

We ended up doing a much quicker pass through than we had hoped.  Both the crowds and the kids were problematic.  When we go back this summer, I would really like to do a longer pass through this amazing sight.

The kids were super hungry, so we debated getting food nearby or heading back to our apartment.  In the end, we decided to head back and found a decent, if overpriced, restaurant.  John loved his pizza, and I had some really great appetizers as well as an amazing cannelloni pasta dish!

Casual Exploration of the Heart of Rome

We then wandered by the Spanish Steps via a bunch of side streets, and eventually made it to the Trevi Fountain.  To John’s disappointment, we found that it was being restored and a lot of it was covered.  From his school report on Italy, this was one sight that he was really looking forward to seeing.  We also stopped by the Basilica of Augustine (I think that was the name), which was incredibly beautiful.

After some rain and a rest at the hotel, we went back out for an evening stroll, picking up some small pizzas and other street food for a light dinner.

After another breakfast of croissants and cappuccino, we headed for the Vatican.  Amazing! 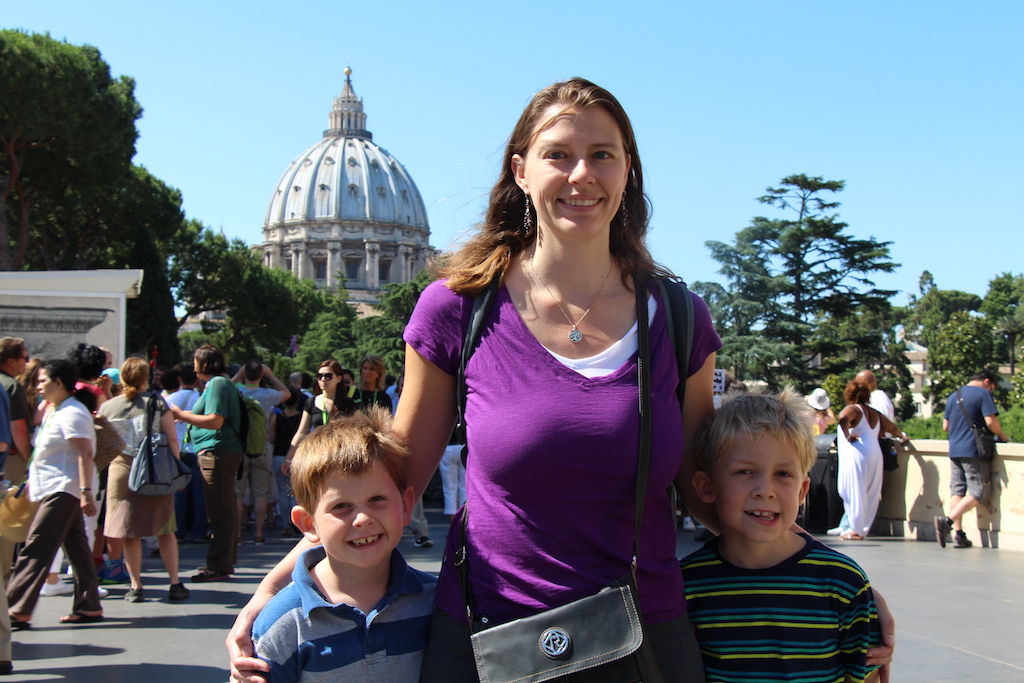 So, we didn’t fully realize that for the Vatican, you really want to pre-book a time. Otherwise, the other line moves at a snail’s pace. We wondered how bad it could be if we got there at opening time, and realized quickly that it was a mistake.

Jeremy went to scope out the situation.  He came across a slightly sketchy vendor selling “skip the line” tour tickets for double the list price.  Not sure how legitimate the tickets actually were, we decided to go ahead and try it. The “skip the line” basically involved walking into the Vatican with a tour group run by that company, but then splitting off from the group and the tour guide once inside – it is permitted by the rules, but interesting that this is a thing.

When the boys saw Jeremy heading back, one of them darted out into the busy street.  Luckily it turned out okay, but drivers in Italy are a bit crazy, so make sure you keep an eye on your kids.

We eventually made it inside by 10:00am, which really wasn’t bad given our 9:00am arrival.  If you are planning to come here, seriously think about buying tickets ahead of time.

The artwork was amazing! 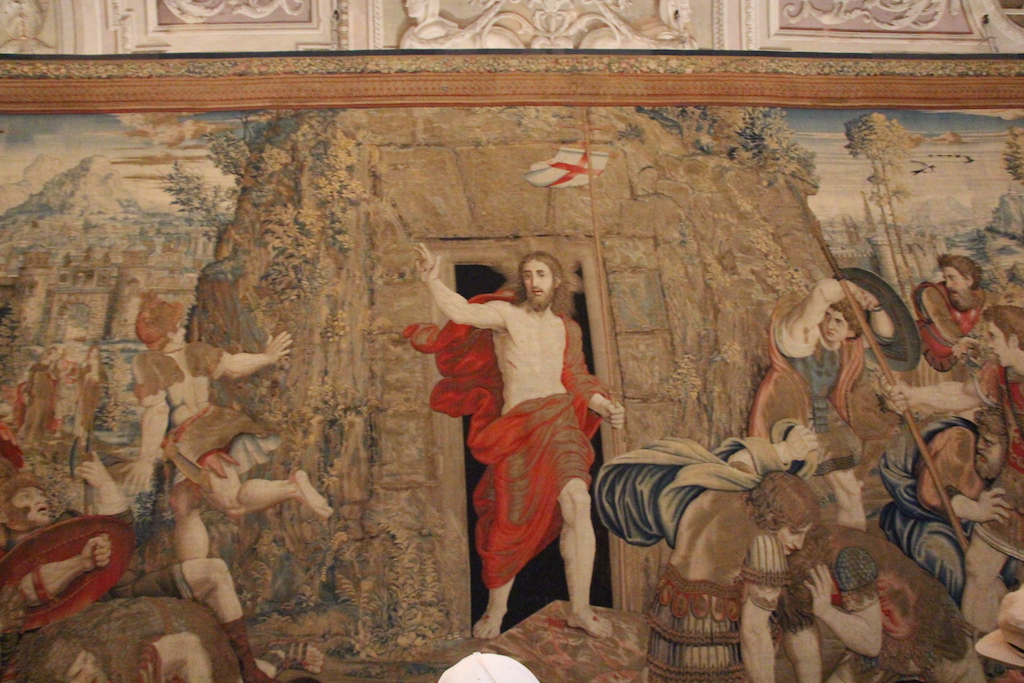 Beyond just art on the walls and ceilings, there were also amazing sculptures.

We also really enjoyed both the Egyptian exhibits and Rodin’s famous sculpture of “The Thinker.”

After a very crowded, and quite lengthy, walk through the museum, we made it to the Sistine Chapel, making sure to follow Rick Steves’ guidebook suggestions for getting to there with fewer hassles.

The Sistine Chapel was amazing!  We thoroughly enjoyed staring at the ceiling for quite a while.  Beautiful! 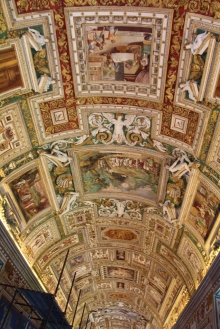 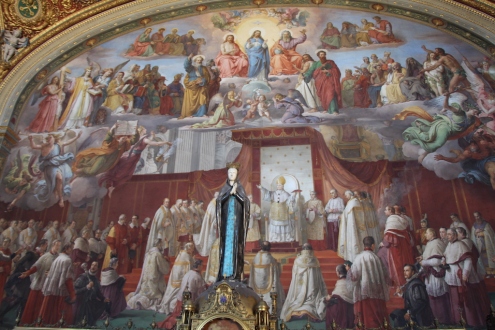 When we were here in 2005, our arrival coincided with Pope John Paul II’s death and the Vatican was almost completely shut down.  It was interesting to see what happens during that type of momentous occasion, but we were happy to have finally made it to this amazing room.

After finishing with the Sistine Chapel, we followed the signs to St. Peter’s Basilica, which we were able to see in 2005.  Beautiful, but we were completely exhausted and sick of the crowds.  If you choose to visit Rome, make sure you make some effort to be in really good shape.  Simply walking through the Colosseum and the Vatican take much more effort than you might expect. 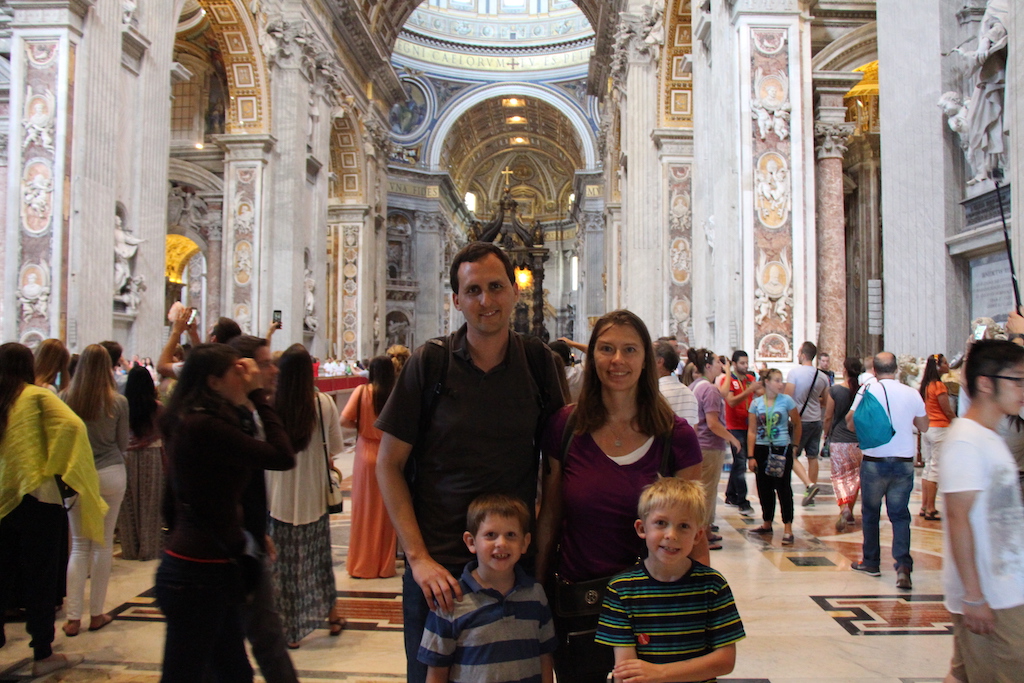 What a fabulous morning!

If you are in Rome, make sure you make time for this amazing slice of history. 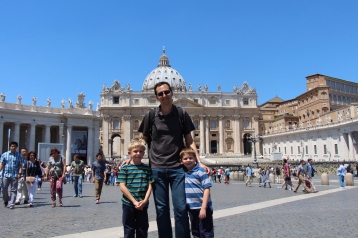 We decided to walk across the Tiber on the way out and get lunch on the other side at L’Antica Porta.  The bruschetta was awesome!  Definitely the best I have ever had!  This was followed by a delicious fish, and then a somewhat mediocre pasta.

In 2005, we had bought a painting from an artist in Piazza Navona – we have it hanging in our house. 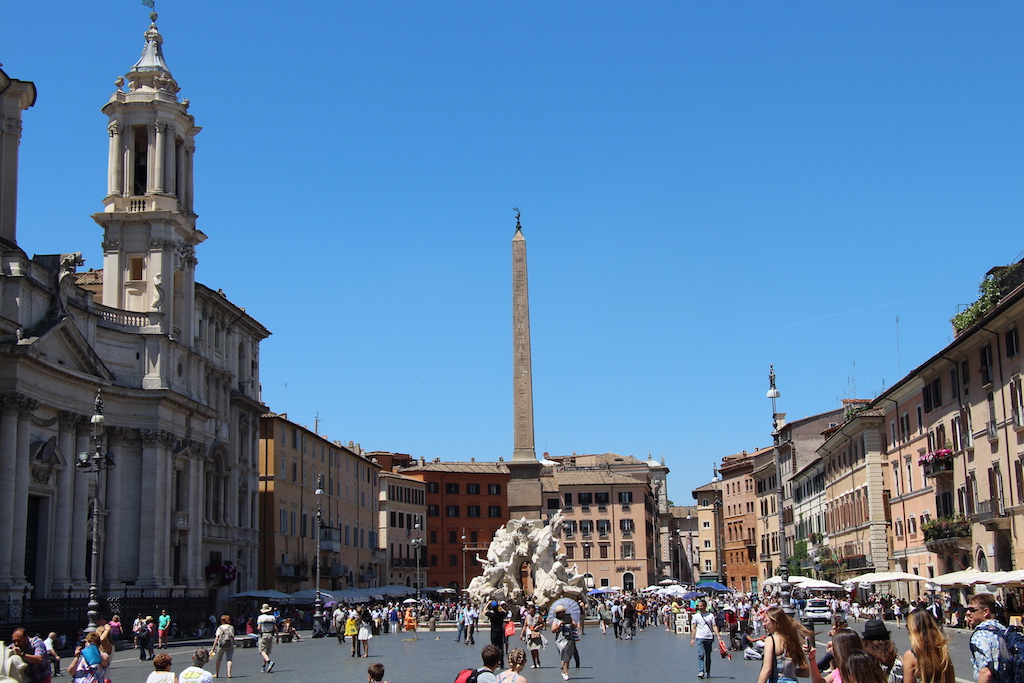 This is a great place to pick up some local artwork, watch some painters at work, or enjoy the atmosphere. 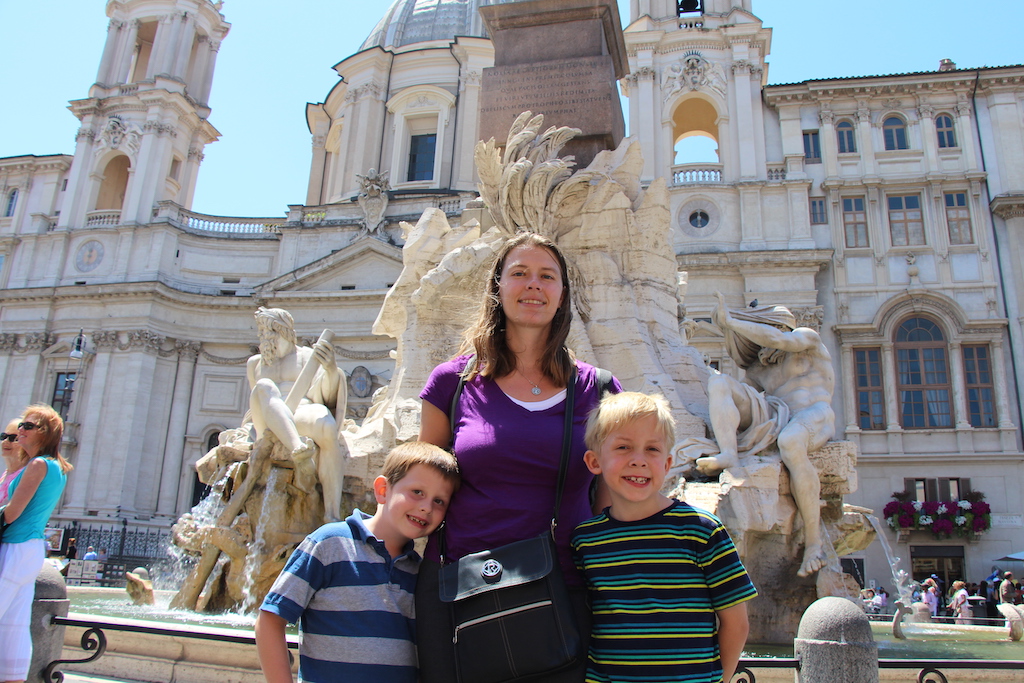 From here, we took a stroll to Campo de’ Fiori, where we got a super fun demo of an (admittedly infomercial-like) kitchen tool that makes all sorts of delightful creations with carrots, potatoes, zucchini, and other vegetables.  The guy managed to make interlocking spirals and a bunch of other shapes that wowed the boys.  John tried the shredded carrot salad that had lemon on top (there was some story about a squeezing lemon on a dog involved), and fell in love with it.  The boys were completely amazed, so we bought the set, which really didn’t work the same way at home as it did there.  But the enjoyment of the demo was worth the money wasted on the tool set.  And the guy gave John an entire gigantic carrot to take with him, which he ate like an apple, skin and all.

At this point, we decided to cross the bridge to Trastevere.

We wandered through some fun streets and saw a few churches, including the Santa Maria.  When finished we crossed the river again and went to the Jewish Ghetto, then took a cab back to the apartment. 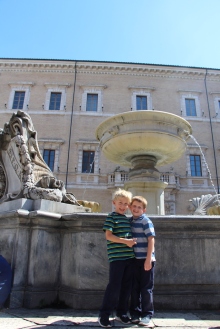 Church Hopping and the National Museum of Rome

On our last full day in Rome, we decided to keep it a bit more low-key.  We started by heading towards Termini to see some of Rome’s beautiful churches.  The Santa Maria della Vittoria was amazing!  It was Michelangelo’s last design and was started when he was 86.

This was followed by the National Museum of Rome, which had some nice sculptures and mosaics.  Everyone was also really impressed by the sarcophaguses.

After a so-so lunch a little too close to Termini, we continued church hopping and saw the Santa Maria Maggiore.  Beautiful!  Every time I think it isn’t possible to find a more beautiful church, another presents itself.

We continued down Via Nazionale, stopping by the exterior of the Victor Emmanuel Monument. 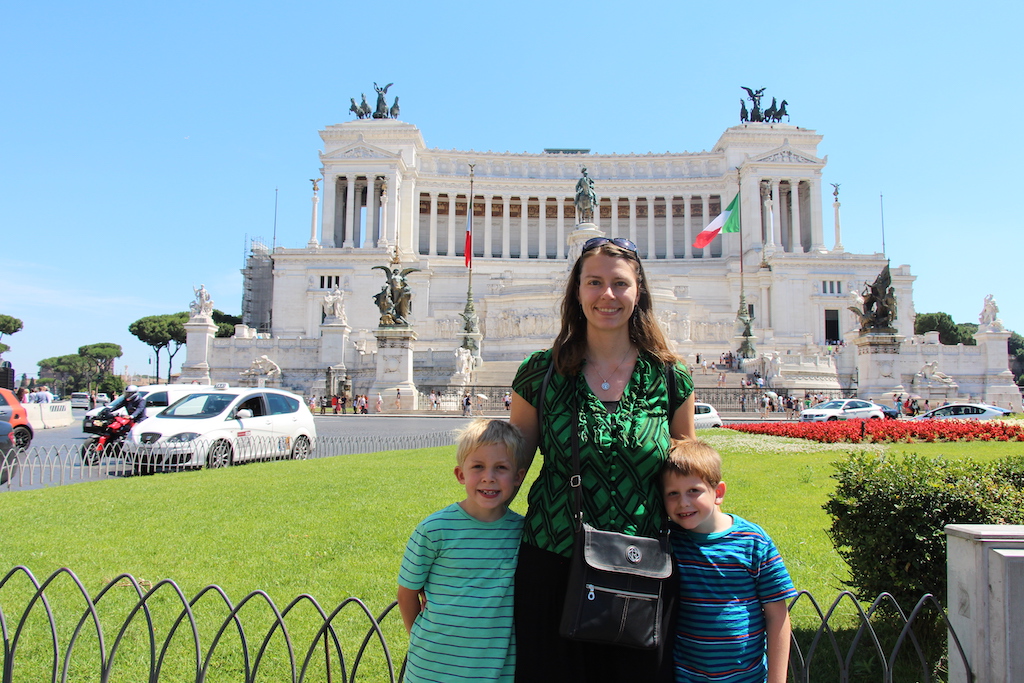 I really enjoyed the stone carvings and statues.

And we got some nice views.

We then wandered through Trajan’s Market, Trajan’s Forum, Caesar’s Forum, and Augustus’ Forum.  The ancient building are quite impressive.

The boys were getting tired, and I was hot, so we stopped at a gelato shop that had indoor seating and cappuccinos available.  Yum!

This city is really amazing.  When we were here in 2005, I really didn’t like it and thought I would never go back.  Fortunately, Jeremy changed my mind.  Being more organized, staying in the right location, and having good transportation plans is really important.

Our morning started fairly early and we somewhat sadly had our last croissant and cappuccino in Rome.  That was a breakfast I thoroughly enjoyed each morning.