Typically, on your first full day in Bangkok, you will want to arrive at the Grand Palace at opening, then spend the rest of the day exploring the nearby temples. Given that this day happened to land on Christmas, we felt a bit weird about spending it visiting temples, so on this day we opted to visit our second list of sights instead.

Our Christmas morning started with a delicious buffet breakfast. There was a stand where you could order custom omelets, more stands that held dim sum items, fresh fruit, salad, hot items with a mostly Asian theme, yogurt, and pastries.

One of the more unusual items I spotted was the “preserved egg,” which is also known as a Century Egg. It is black, gross looking, and you really don’t want to think about how it is made, but as it turns out, it is fairly tasty. A friend told me that it is best served with congee, which is a rice porridge that can be thought of as the Asian version of oatmeal.

If you are less adventurous, you can try the salted duck egg, which is the normal looking egg in the picture above. Also make sure you try the dragon fruit while in Thailand. Eat the white part and skip the bright pink rind, as there are debates about whether the skin is safe to eat.

We then caught a cab to the Jim Thompson House, a nicely traditionally-decorated house built by an American expat who helped rebuild the Thai silk industry after WWII. It also had one of the earlier opening times (9am) of places we wanted to see.

Note about taxis: cabs are usually fairly inexpensive in Bangkok, but you should probably set up the Grab app (the local Uber equivalent) on your phone to maximize your chances of paying a reasonable rate. In this particular case, the hotel hailed the taxi for us, and hence the driver used the meter. But otherwise, for taxis we hailed ourselves and didn’t use Grab, getting them to use the meter was tricky.

We arrived about 5 minutes before opening and were able to get on the first English speaking tour of the day – a tour is necessary to see the site. If you arrive a bit later, the wait time for your tour might be somewhat longer. We spent our fairly short wait time exploring the beautiful garden.

The lily pads in some pots were particularly beautiful.

Jim Thompson was an American who graduated from Princeton, studied as an architect, then worked in New York for several years, then became a WWII spy. Just after WWII he was stationed in Thailand, fell in love with it, and eventually moved to Thailand permanently. He built a house for himself that took traditional Thai buildings, but combined them in a way that was more western in flow. The result is very beautiful. So beautiful that John decided that it was his dream house.

Jim Thompson is best known in Thailand for revitalizing the Thai silk industry and starting the Thai Silk Company in 1948. Nineteen years later, he went on a walk and disappeared. No one ever figured out what happened to him, even though there was a fairly intense search party that went out to look for him.

It’s not possible to take pictures inside (hence only outsides pictured above), but it’s a good introduction to Thai traditional art/architecture. If you are ever in Bangkok for at least a few days, this sight is worth seeing.

Our next stop was the Siam Museum. Our taxi driver naturally tried to talk us into a shopping excursion or a day trip instead, but we were firm and made it to our destination. Our hope was to see some great history of Thailand, but it was better for children that adults. If your kids like opening drawers, pushing buttons, playing games, and the like, it is worth a stop. I enjoyed a few of the exhibits, but the conclusion was that it was definitely skippable. Fortunately we only paid about $6 total for all of us.

We then walked across the street to Saranrom Palace Park, which was quite pleasant.

The boys enjoyed a small exercise park intended for people who don’t care for any resistance, but if you are really into weight lifting or real exercise machines, there was an adult version not far away.

From here, we decided to walk, via various side streets, to Khao San Road, which is popular with the backpacking crowd and supposedly has great night life. Since we were traveling with kids, we decided to visit during the day time.

I was pleased with all the markets, and eventually we found a restaurant. There are a ton of touristy restaurants, but we decided to pick one that looked decent enough, but that wasn’t as flashy. Often times the food quality can be much better at places like this, even if you are in a super touristy section of town.

Good choice! I had the best Tom Yum soup of the trip. While the seafood was fairly limited, and probably not top of the line, the broth was amazing! Spicy, sour, and sweet flavors exploded in my mouth! I decided to spend the rest of the trip trying more versions of this soup, but while some places had much more amazing seafood in the soup, none had broth that could compare to this place.

From here, we decided to walk to the Phra Suman Fort, making sure to enjoy the shops and alleys on the way.

We spent a while wandering around. 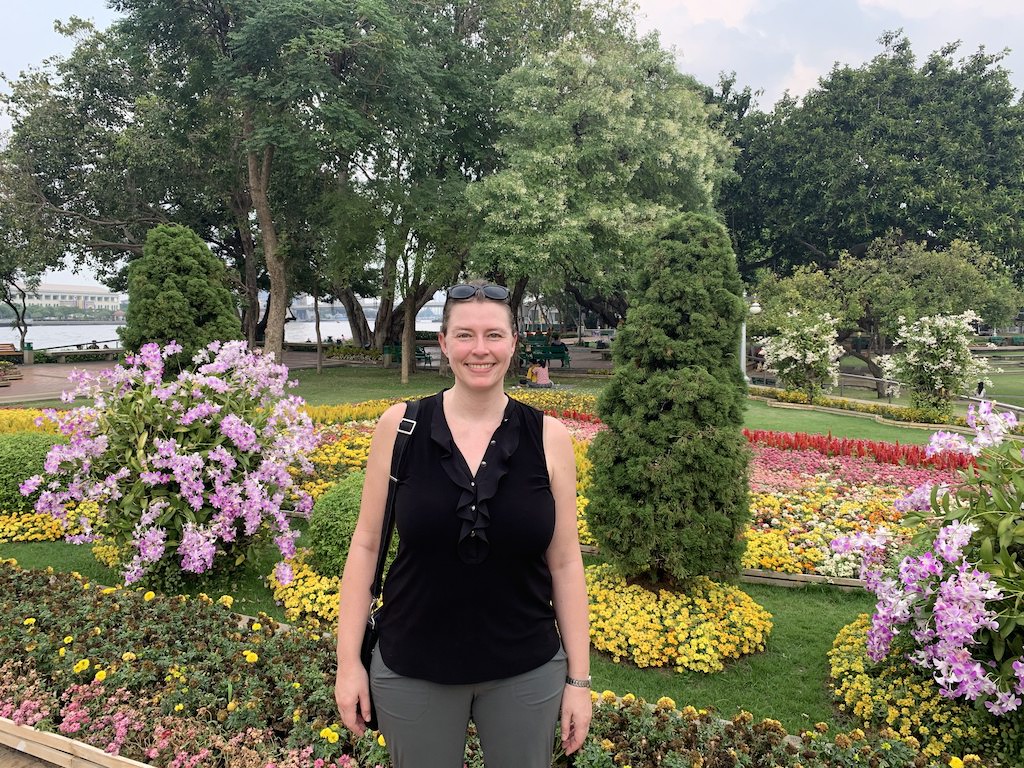 The gardens by the fort were quite nice. 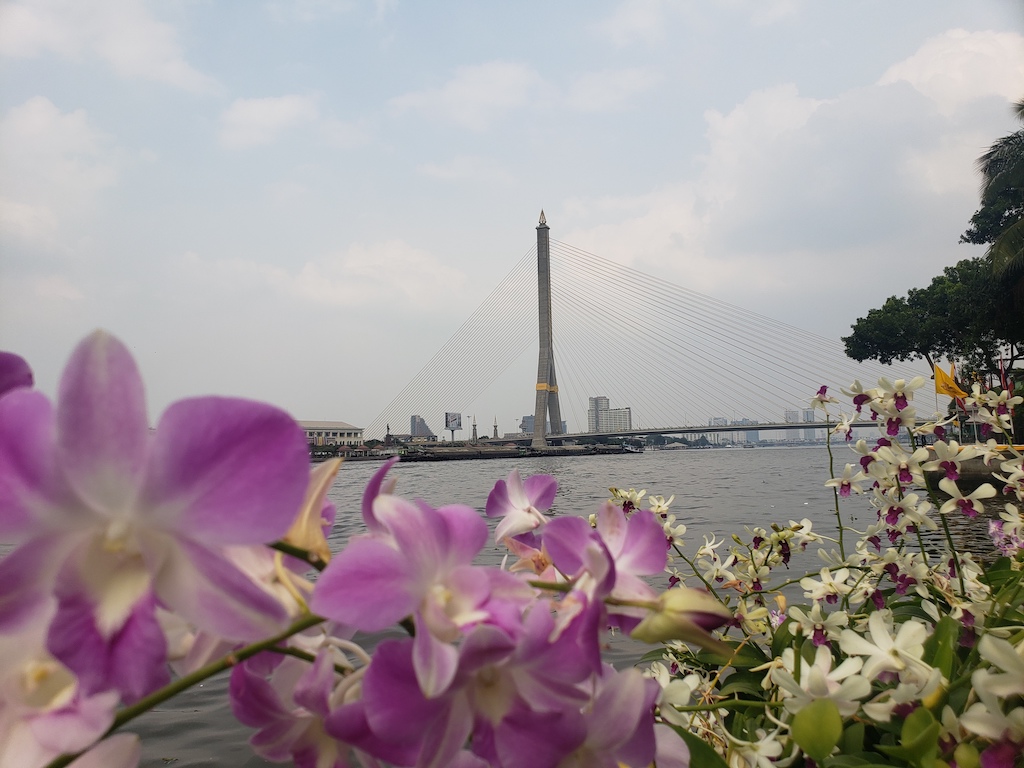 We did a little more exploring in that area, enjoying the vibrancy of the city.

From here, we caught another cab and went to the Siam Center, which hosts a ton of modern malls. I was skeptical, but the malls really are quite elaborate.

It was a lot of fun simply to wander. I enjoyed the jewelry stores, while John liked the guitar, car, and athletic store. James wanted to go look at an English book store, and I picked up some tape for my journal. James was delighted when he found a model airplane store, but quite sad when he realized that it was only for very high end collectors. Still, he had fun looking.

Regardless of how you feel about shopping, this place is worth a stop. Just keep in mind that if you are window shopping, you will have a lot more fun in the higher end malls, rather than the ones designed for average spenders.

All of us were quite exhausted so we hopped on the BTS metro line back to our hotel for a swim and some rest time. Our pool is on the 7th floor and has amazing views of the city! 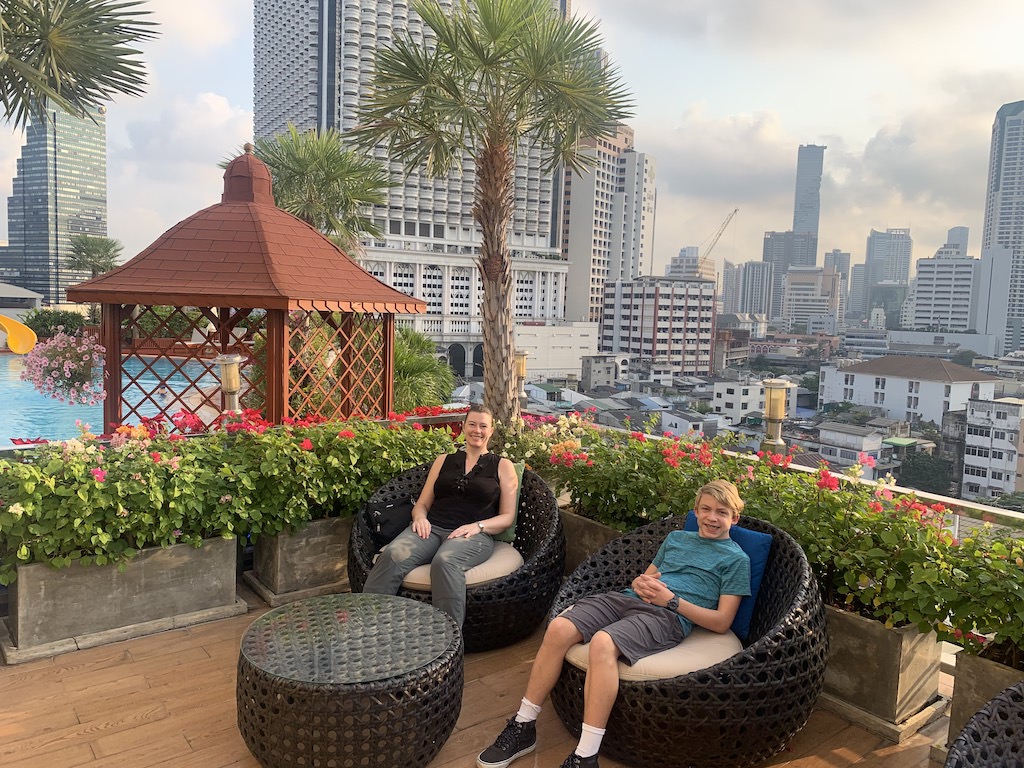 As we rested, we enjoyed the sunset from our balcony. Again, John got another nice shot. 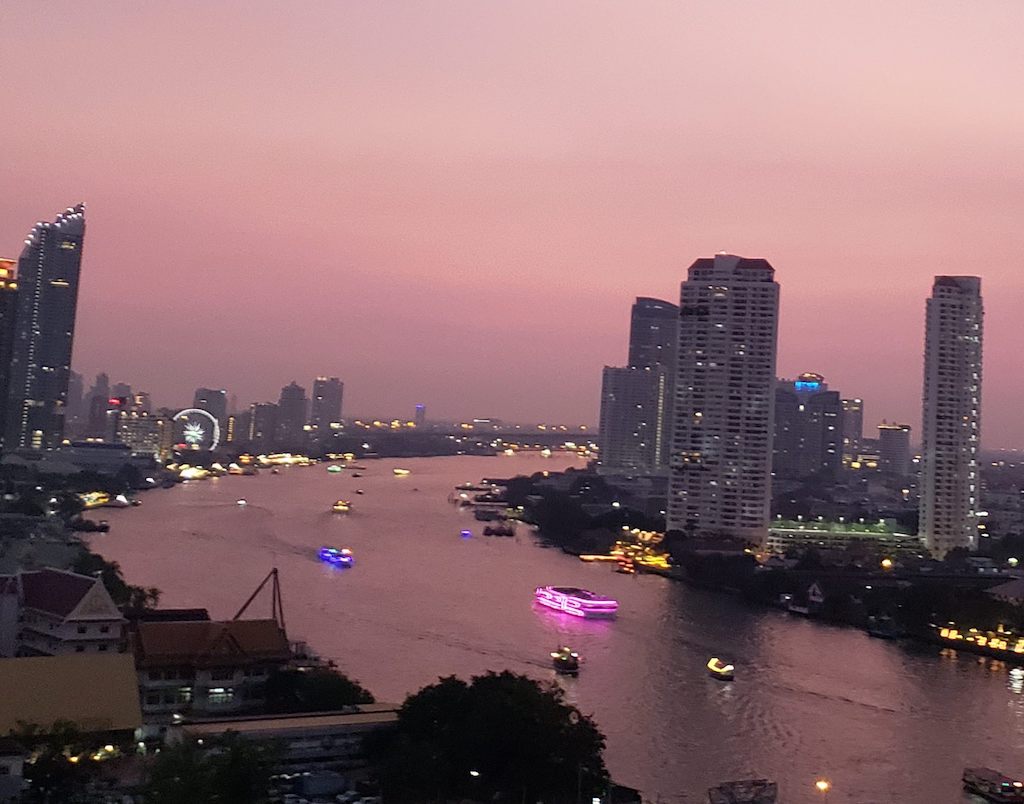 For dinner, we decided to wander near our hotel. Eventually we found a street that had a few restaurants and picked one. The waitress suggested a few different things, so I decided to try a beef thing with rice and an egg.

The boys decided to try the coconuts, but they weren’t fans, so I traded drinks with them. Initially, I didn’t like it either, but it paired fairly nicely with the food and eventually I acquired a taste for it. 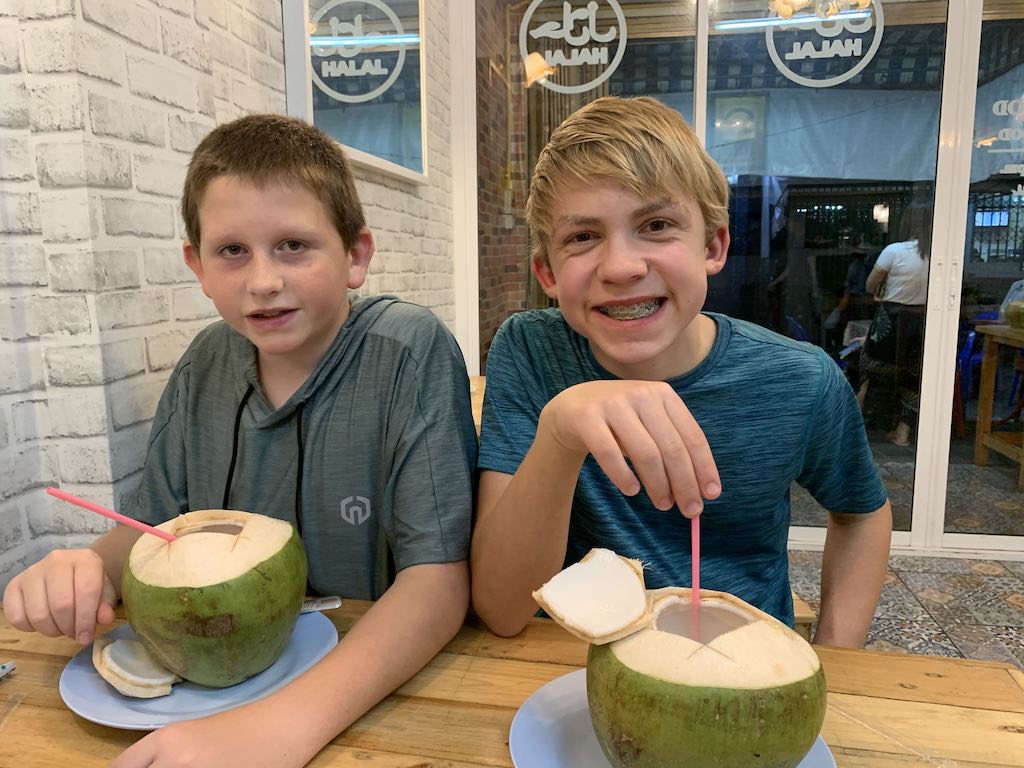 What a fun Christmas!