On our last full day in Phuket, we decided to take a cooking class. Wonderful choice! While in Thailand, you should try to take at least one. We had originally thought about taking one in Chiang Mai, but after further reflection on the fact that beaches really aren’t Jeremy’s thing, and that the kids really only enjoy spending half days on the beach, we decided that a late afternoon or evening class in Phuket would be ideal. 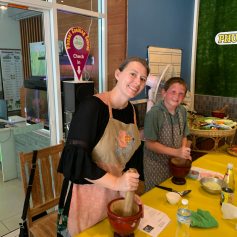 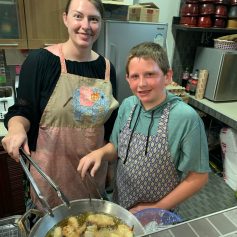 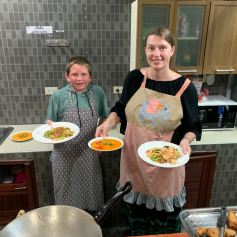 Even though we are usually early risers, we didn’t make it out of the hotel until around 10:00am. This was slightly unfortunate since the front row of beach chairs were already taken. We did manage to snag two back row seats that were both next to the main walkway from the beach to the sidewalk, and near the trash cans, but it still gave us a place to sit comfortably in the shade.

John decided that he wanted to avoid the sun for a while, so James and I headed down to the water. I simply enjoyed floating on the waves, while James preferred to be a little closer to shore where body surfing was a little easier. He spent hours riding the waves to shore. I joined him for a bit, but mostly just enjoyed feelings of peace and joy as I floated. After a while, John came down and enjoyed floating with me. Once the boys started a bit more horseplay than I enjoy, I decided to head back up to our umbrella.

Once everyone was content with our last day of beach time, we decided to head back to the apartment, picking up some snacks on the way.

Having thoroughly enjoyed my massages the day before, I decided to try one more. So delightful! Definitely the best massage of the trip. When looking for somewhere to get a massage, look for places that look legitimate and don’t have a sleazy feel. A massage parlor on a main road in a less sketchy area is more likely to just offer massages than ones more out of the way or in more notorious areas.

A shuttle picked us up at our hotel at 3:15pm and took us to the local market. There were a total of 6 of us in the class, which was a great size. As we walked through the market, our guide showed us some of the traditional ingredients that go into Thai cooking and gave us some ideas for substitutes that we could use if these ingredients were unavailable at our home countries.

The vegetable market was interesting, but the meat and fish market was more so. He explained the different varieties of shrimp, showed us the local crab, and when he heard that I had once lived in Alaska, explained that their crabs were much smaller than the Alaskan king crab. Alas, I didn’t bother to tell him that we only had Dungeness crab where I lived, but even those were much bigger than the Thai crabs that he showed us.

Then we looked at the chicken and he showed us the difference between an egg chicken and a meat chicken. It was interesting to note that the egg chicken was quite yellow. I guess it makes sense that there would be different varieties of chicken and that you wouldn’t want to waste the chicken meat once the chicken became too old to lay eggs. It really pointed out some of the wasteful/sheltered habits we have in the United States.

After finishing at the market, we hopped in the van again and continued on to the cooking school. We were all given aprons, but John was not happy with his pink, frilly, apron, so he traded for mine.

The instructor then pulled out a number of ingredients that we saw at the market and began to explain each of them in more detail and showed us what we should do with them, starting with the ingredients for a Penang curry paste. 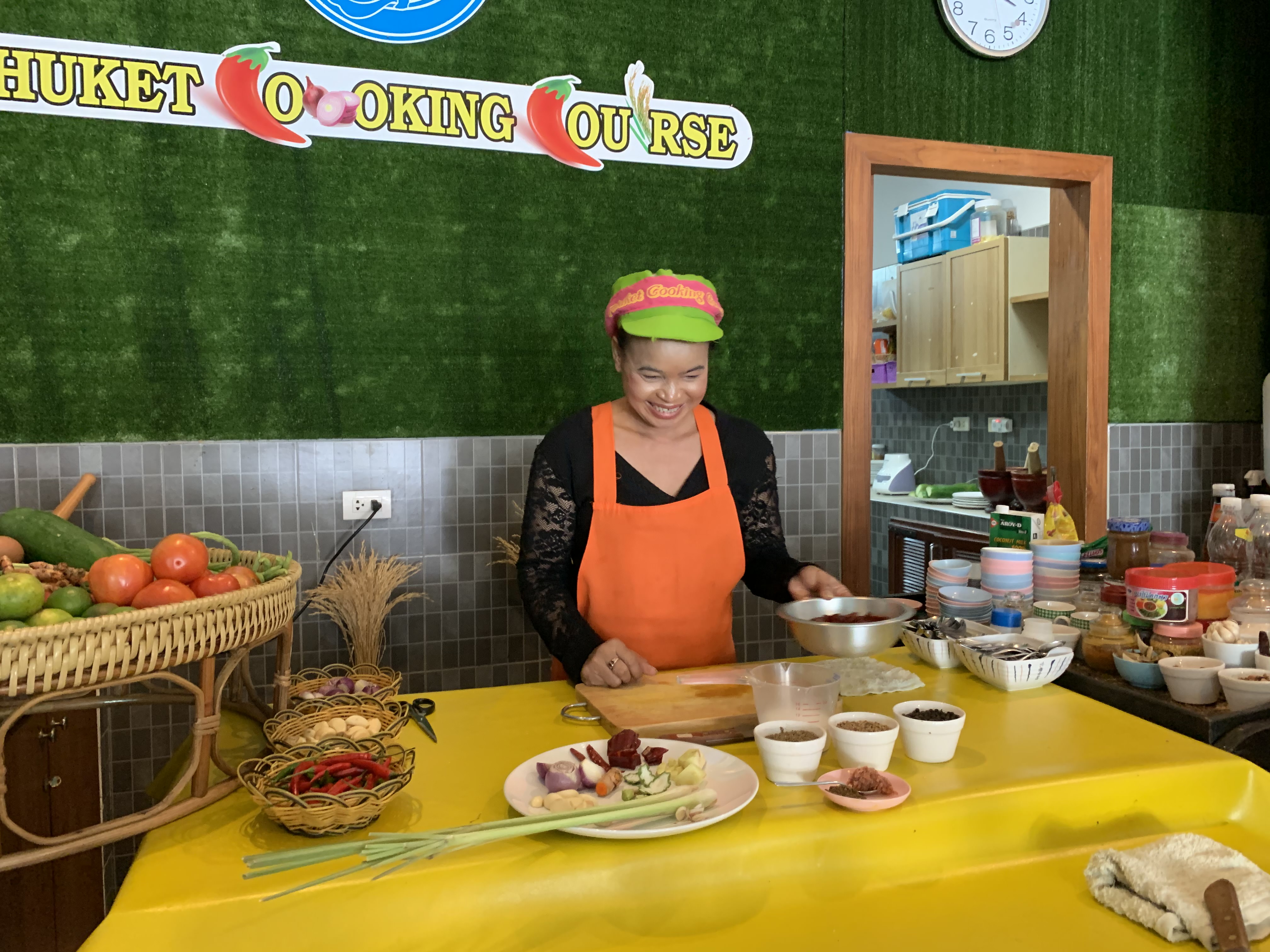 Each person was given one or two of the ingredients, prepped them, then added them to a big mortar. She then showed us that we could either spend an hour smoothing them into a paste, or we could just dump everything into a blender. I was a bit disappointed when she said that they would simply blend it in the back room, but I guess it gave us more time to work on some other food. 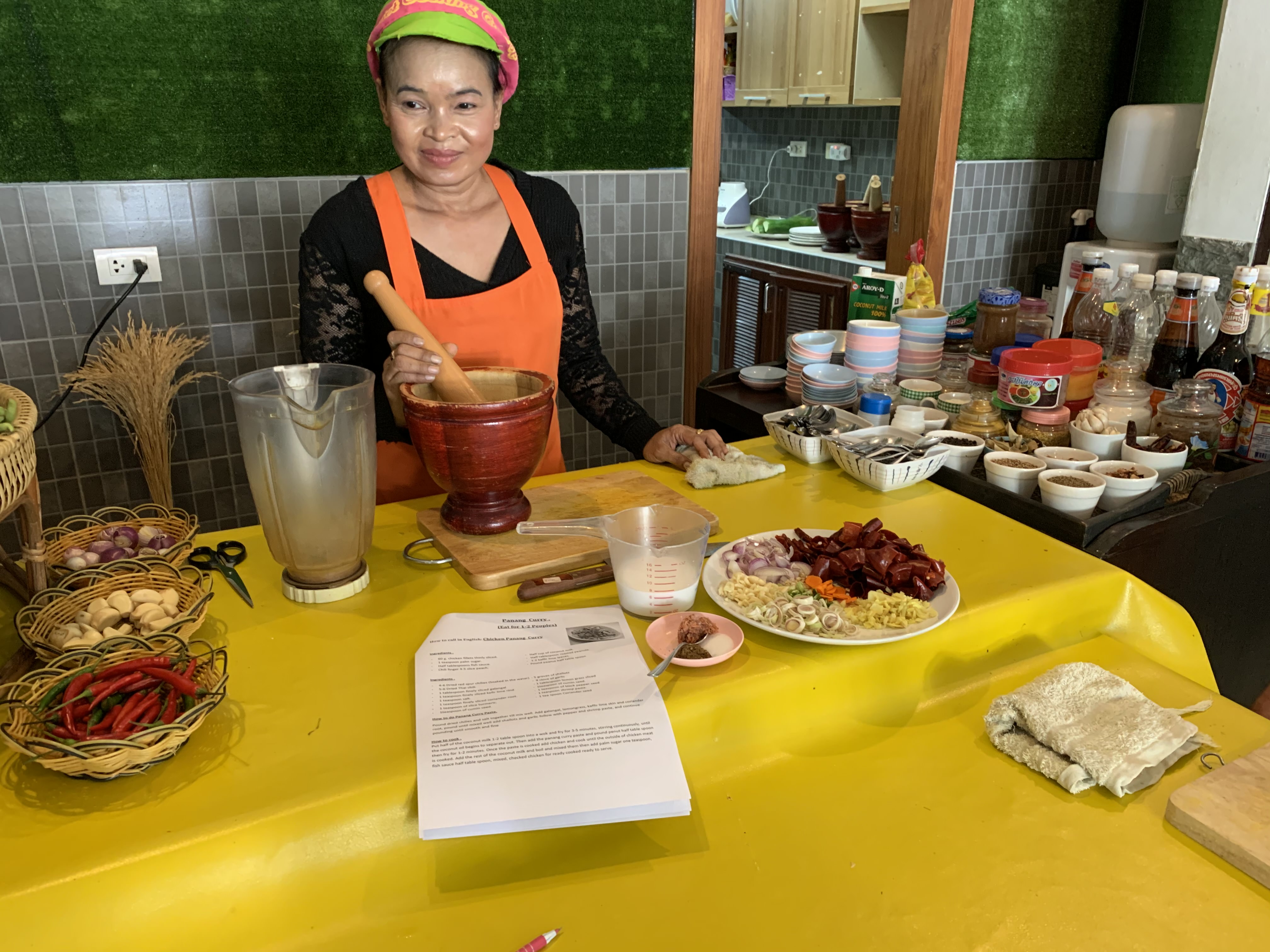 After finishing the curry paste, we prepped more food for our Pad-See-Ew, which is a delicious wide noodle dish, and more ingredients for the fried bananas and papaya salad. 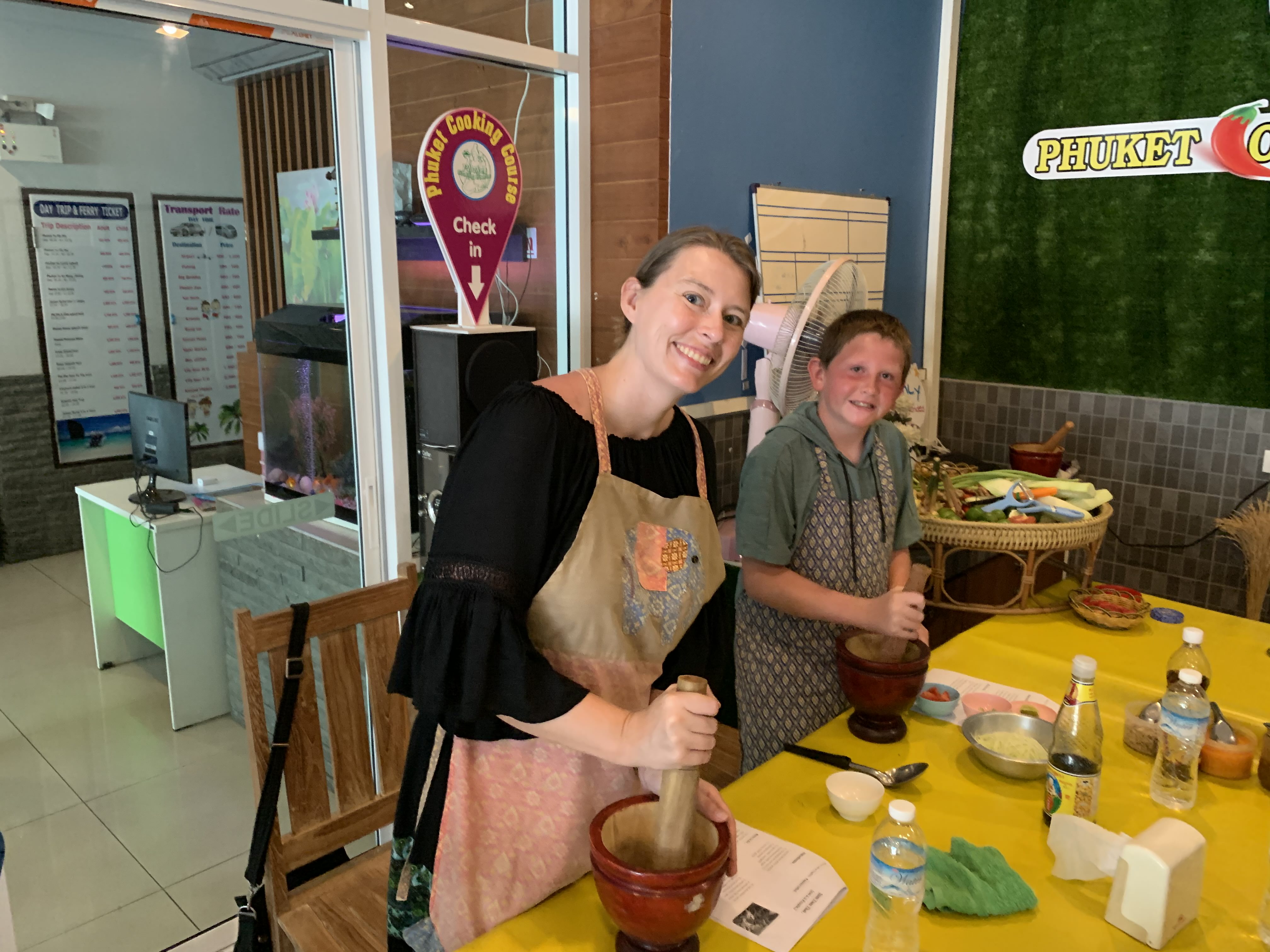 At this point, they had us go ahead and finish the papaya salad, and we were told that we could make it as spicy or mild as we wanted. They recommended one green chili for mild, one red and one green for medium, and two reds for spicy. Mango were served alongside the salad to cut down on the spice. Delicious! 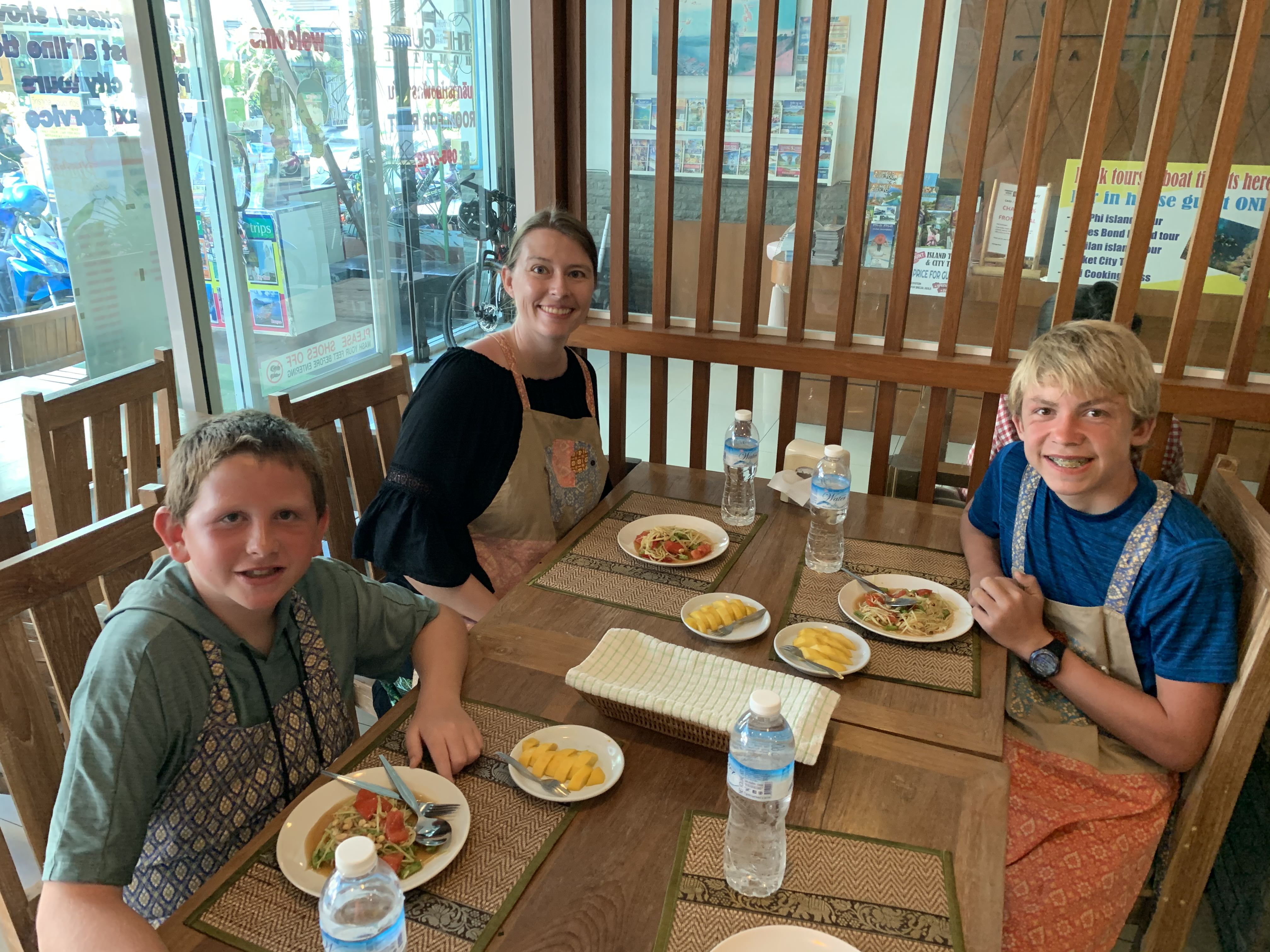 We then went into the kitchen to fry the bananas. Previously, we had coated them in a paste of coconut and rice flour, and we took turns slipping them into the hot oil. We were then told that the staff would eat these ones, and they would make more for us later. I think our efforts were subpar as some were not quite coated enough, others were either undercooked or overcooked. But we had fun! 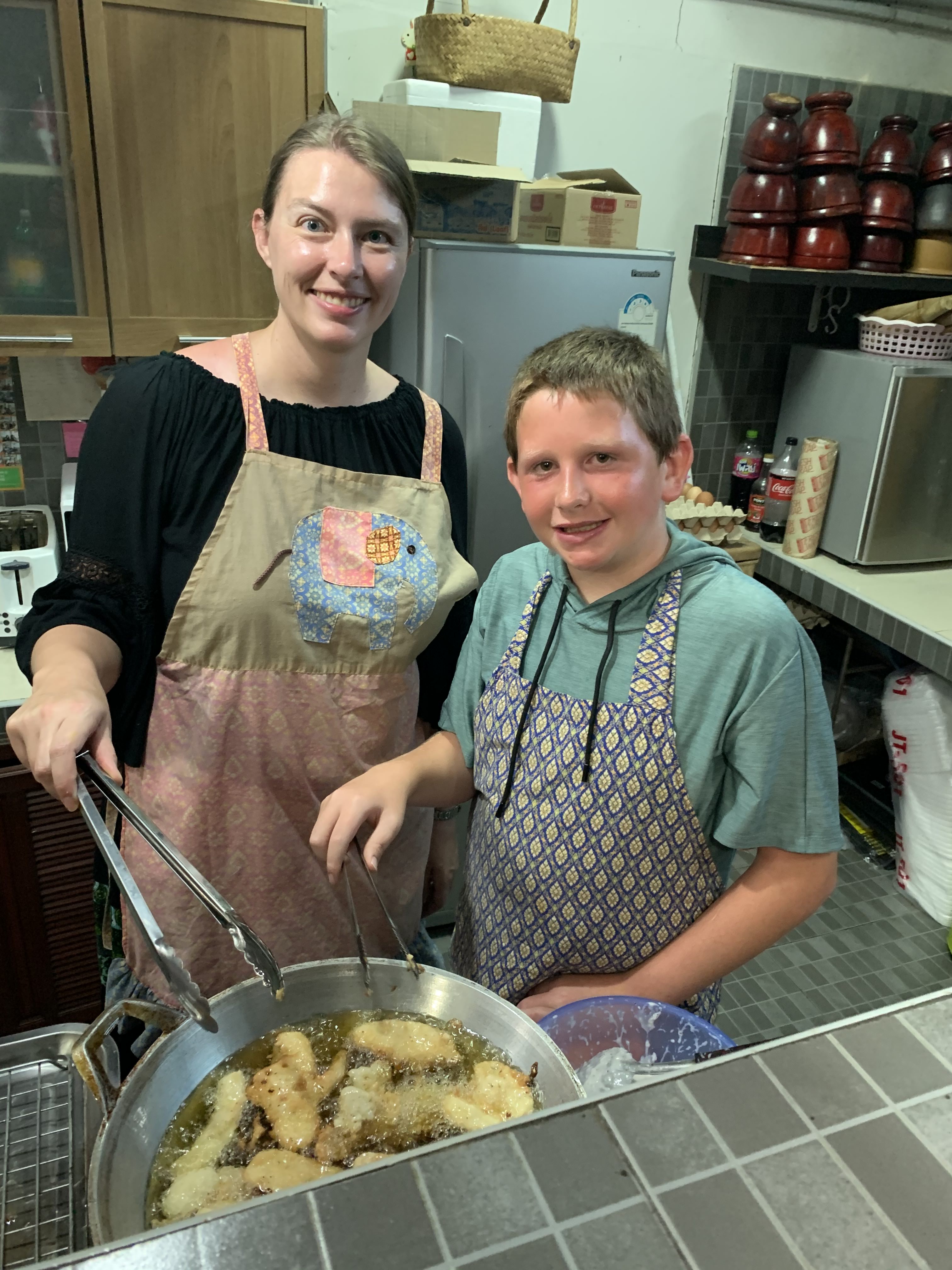 Next, we were each given a cooking station and all the ingredients that we had prepped for the Penang Chicken Curry and Pad-See-Ew earlier in the afternoon were waiting for us. The instructor went through the steps, then had each of us add the ingredients in the order she called out. There wasn’t a lot of time between each step, so we had to work fast. 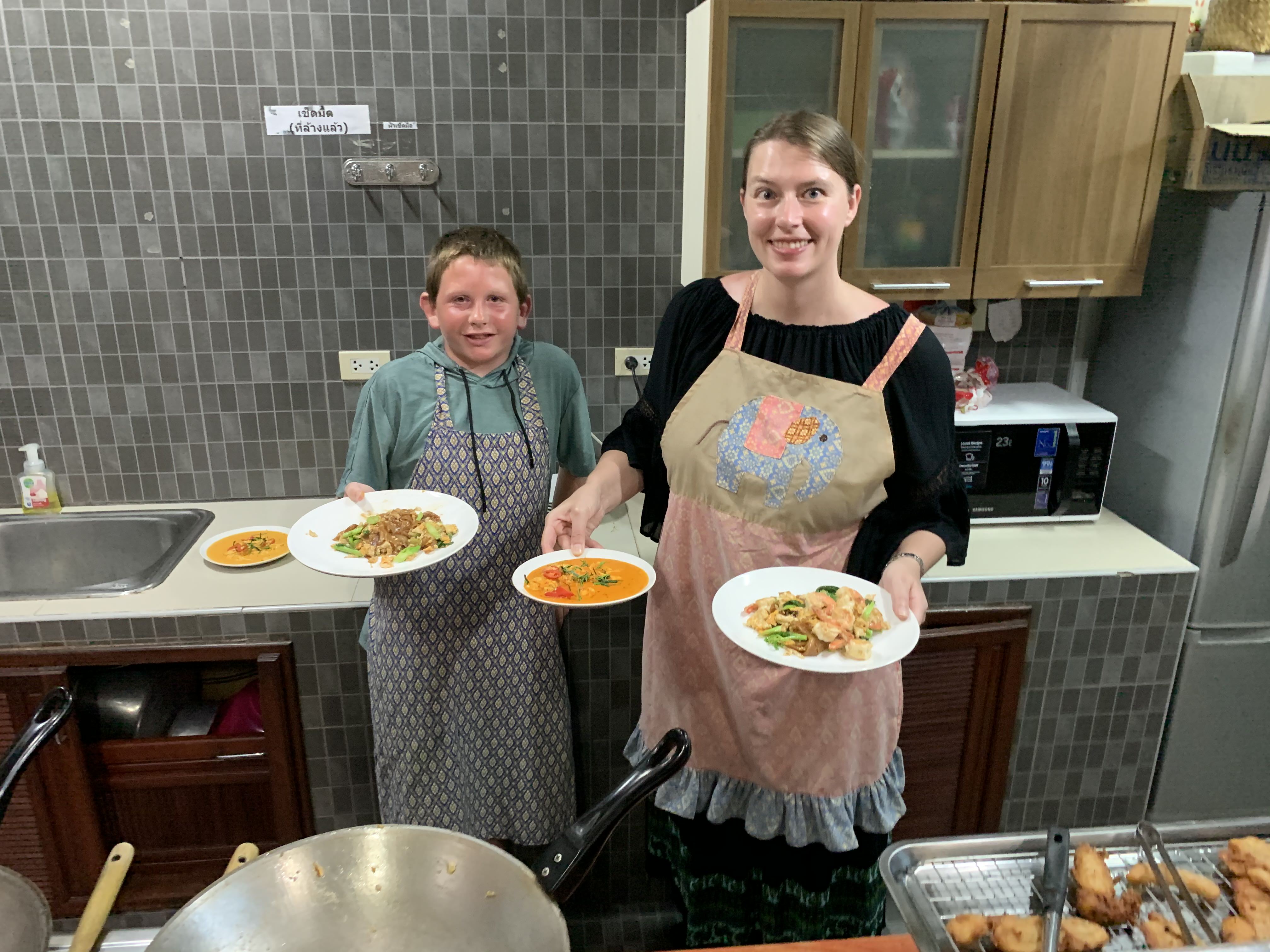 As we were pouring the food onto our plates, one of the kids dropped a little on my foot, but fortunately it didn’t cause a burn. He then plucked all the shrimp out of his plate and put it on mine. When the instructor walked over, she was shocked that he didn’t have any shrimp, then laughed when she saw it on mine and scolded him a bit for not wanting it.

Then the other kid decided to helpfully add some extra chili to Jeremy’s dish. So, I ended up swapping dishes with him and he got my extra shrimp. Still, it was delicious! The staff was quite impressed with our boys tolerance for spice and congratulated them on it. Of course, the boys did go through much more water than the rest of the group, but everyone enjoyed their food.

When the bananas came out, all of us were wowed. Amazing! Custardy deliciousness that was completely different from what I envisioned met my tongue.

Once everyone was finished eating, the van pulled up and we were off to our hotel. The evening was spent in packing, dealing with heat rash on one of the boys (cortisone cream works wonders), and resting up for exploring a new city.