On our second full day on the island of Phuket, I woke up after 11 hours of sleep feeling significantly better and was ready to go to the beach with the family! We had another nice hotel breakfast of pancakes stuffed with bananas and topped with either chocolate sauce or honey, then set out for the beach, picking up some snacks at 7-Eleven on the way. 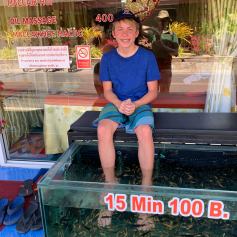 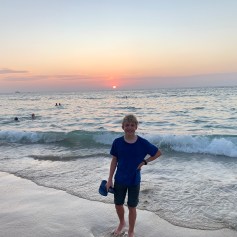 Fortunately, we arrived early enough to get front row chairs with an umbrella and the boys ran off to play in the waves.

Massages on the Beach

Within a few minutes a woman walked by, advertising massages on the beach and pointed to a tent just behind our chairs. I decided to go ahead and try it. For only 400THB, about $13USD, I figured that even if it wasn’t great, it wouldn’t be that much of a waste of money. To my delight, it was quite good, although they only had regular tables, rather than the ones that have the hole for your face. I was a little worried about how hot I would get, but since the tent was under some palm trees and there was a steady breeze, it was really pleasant.

An hour later, I was quite happy, and decided to join the boys for a swim. The water was amazingly clear and we enjoyed watching the small schools of fish that decided to come say hello. I had a lot of fun simply floating on the waves.

Chair and umbrella rentals are the same price (about $7) regardless of whether you stay 1 hour or until 5:00pm, so at lunchtime we debated completely packing up, or leaving our towels to hold our spot. John was quite sunburned and wanted to head back, while James thought an afternoon in the pool sounded delightful, so we opted for the latter.

We found a nearby restaurant and I had a delicious papaya salad. I was expecting it to be spicy, but they must have taken one look at my white face and decided to tone it down. Still good, but not what I was expecting. James was delighted with his pineapple fried rice that was served in a pineapple shell, and John decided to take a break from Thai food and ordered a garlic cheese pizza. Quite tasty, although since the tomato sauce was missing, it was more like deliciously cheesy, garlic breadsticks. When you travel, don’t expect things to always turn out the way you envision and be willing to run with the surprises.

Fish Spa and Another Massage

James and I decided to head out while Jeremy and John settled the bill. We found a place that had both a fish spa for James’ feet, and a massage parlor for me.

I asked for 15 minutes for James, and an hour for me, and tried to communicate that Jeremy would be picking James up. They must have misunderstood because when Jeremy showed up, they tried to keep James longer, but they figured it out and only had to pay for the 15 minutes that I asked for.

Note that if you decide to do the fish spa, you might want to read up on the sanitation concerns that many people, including the FDA, have raised. The idea is that the fish eat all the bacteria, dead skin, and other crud from the bottoms of your feet, leaving your feet nice and clean. The problem is that there is no way to sanitize a fish between customers, so the squeamish are skeptical that the fish won’t transmit diseases from person to person. But there is no hard evidence that this actually happens in practice, so we decided to go ahead let him try it.

When I was finished, I decided to wander through the shops and markets and ended up picking up a swim coverup and a skirt. In addition to the skirt that I bought, I also saw a super cute elephant skirt, but even though the salesperson tried to convince me that the elastic would stretch to fit me, I was unconvinced and decided to pass. I made that mistake in Beijing once and ended up with a skirt that would only be comfortable if I were about 10lbs lighter.

Before travel, take a look at existing skirts that you own and try to judge the size of the waist on the hanger and the amount of stretch that they have. In Asia, one size fits all most often means one size fits small.

This is particularly true for pants. I don’t consider myself huge, but if you are tall or on the larger side, don’t expect anything other than the elephant pants to fit. Those pants are one size fits all, literally. The drawstring makes it so anyone from size XS to XXL can probable fit into most of them. I thought about getting a pair, but I couldn’t see myself wearing them at home.

Sunset on the Beach

When I was done, I decided to walk up the hill to the hotel. After resting a bit, we decided to go see the sunset on the beach again. The clouds made it a little less beautiful than our first night, but there was an opening near the horizon that made the end of the sunset quite nice.

We were thinking about going back to Kata Beach for dinner, but John was sunburned, tired, and just wanted a chill evening at our hotel, so we picked a restaurant that had a delicious looking fish on display and nice view of the beach. Of course, by the time we got our food, dusk had come and gone, and our view disappeared. 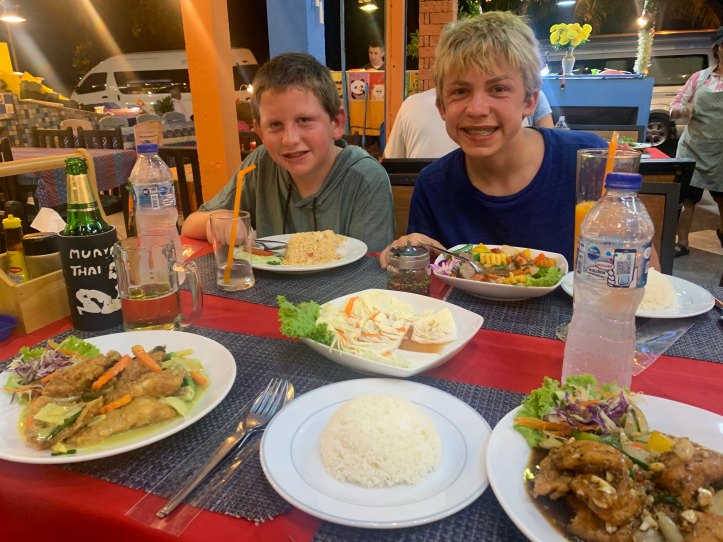 My green curry fish was amazing! The fish was super fresh, perfectly cooked, and the sauce quite tasty, and this is coming from a girl who grew up on delicious fresh Alaskan fish. Jeremy’s pepper fish wasn’t quite as tasty, but still nice.

When picking seafood restaurants, look for ones that have amazing looking fish out front. They put their best stuff there, so expect whatever is in the back to not be quite as good. If there is a sad display, you probably don’t want to think about what is in the kitchen. 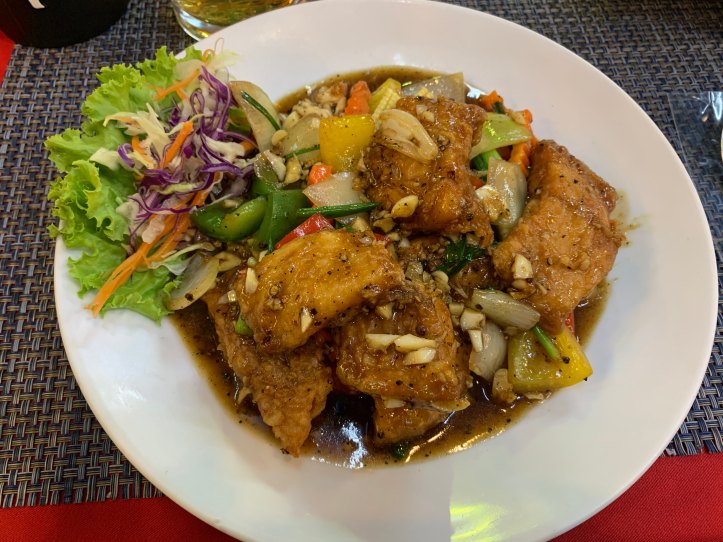 Also look for a place that has plenty of fresh ice on the fish. Thailand is hot, and if the restaurant is letting the ice completely melt, the fish will quickly go bad, particularly if the fish goes though several cycles of being on ice and sitting in warm water. If a restaurant is diligent about replacing the ice out front, they are much more likely to be caring for the food in the kitchen as well, so you are less likely to get food poisoning. Of course, you may be unlucky and walk by the only time the restaurant has replaced the ice, but if you apply the first rule and look at the appearance of the fish, you are still likely to be okay.

Afterwards, John decided he wanted head back to the hotel, while James wanted to try and eat a scorpion. So, I took John back, while Jeremy and James wandered to the night market in Kata again. That said, when he saw at the sheer size of the scorpion, he ended up skipping it in favor of other inspects instead.