On our final full day in Thailand, we split up – Jennifer and James visited the Maerim Elephant Sanctuary, while John and I went mountain biking.

Chiang Mai is surrounded by mountains, and there are some great mountain biking trails in the nearby Doi Suthep National Park. We went with Mountain Biking Chiang Mai for the excursion, and who picked us up at our hotel, rented us the bikes, drove us to the top of the hill, and provided us with guides to help us down the mountain.

We chose the “easiest” route, but it was quite challenging, even if it was mostly downhill. In practice, they observed folks in the group during the initial portion, and separated us up a bit based on our speed and ability. Our sub-group had maybe 10 of us with a couple of guides – I suppose we were the “beginner plus” group, and took a slightly longer, harder route, while another sub-group did a shorter, easier route. 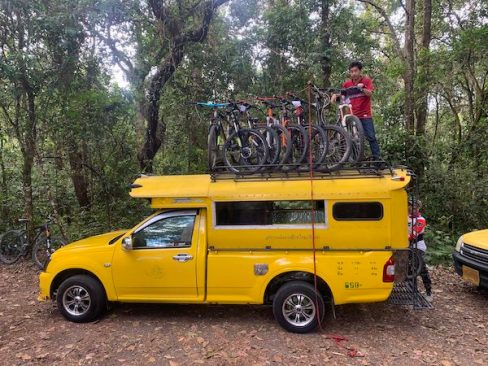 In any case, after being picked up at our hotels, we tried out the rental bikes briefly at their office in town and signed some paperwork. We then got in the back of the pickup trucks with benches that are common in Thailand, and made our way up to the top of the mountain.

From there, we put on the safety gear, and got used to the brakes and such on the bikes. The bikes definitely had seen some wear from going down those trails on a regular basis, but the guides had appropriate equipment to make basic adjustments and fixes. 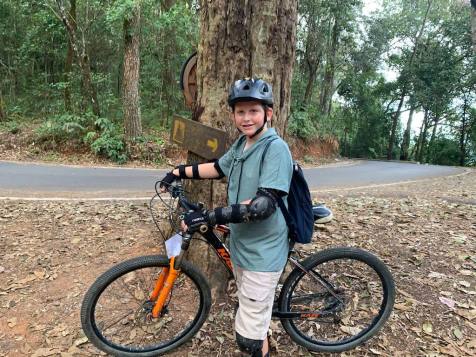 We took the initial segment more slowly, and they split us up into subgroups after that point.

After a little further, we got to a beautiful stop with some cherry blossoms, where plenty people were out taking pictures. One interesting thing to think about is that in Japan or in Washington, DC, the cherry blossoms are in season at Spring time. But in Thailand, with its warmer weather, the blossoms come out in December.

The actual trail was dirt in parts, quite rocky in parts, and gravel in parts. We used the brakes quite a lot, and the overall distance was on order of 25 km:

The next major stop was at a cafe overlooking a coffee plantation. We stopped there for maybe 20 minutes to rest and get something to drink. There’s a nice view over the hill. 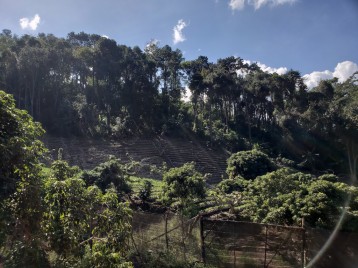 Our group then doubled back slightly and went down a somewhat more challenging (“beginner plus”) trail. Our main guide was a bit of a character and had an interesting sense of humor, and was quite a bit of fun to go down with. Along the way, he picked a few of the local oranges and chillies for us to try. 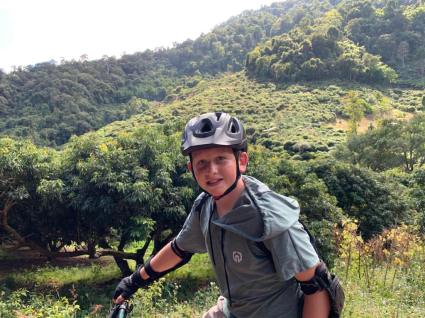 There were a few fairly brief uphill sections, but it was almost all downhill. Though honestly, the flatter sections were a lot less work – the downhill portions required quite a bit of concentration to ride safely, given the deep grooves in the road and piles of rocks. It was definitely fun to do, but thoroughly exhausting – more so than I expected. John was greatly enjoying the route – it was everything he hoped that it would be.

Once we made it to the lake at the bottom, we had a late lunch that was included in the excursion. It was a nice opportunity to rest.

While we were recovering, the crew packed up the bicycles and got us ready to go, and eventually took us back to our hotel.

In any case, if you’re around Chiang Mai and interested in doing mountain biking, it’s definitely a good place for that. Their harder trails seemed to be fairly difficult, but they seemed to do a good job at switching folks around and [mostly] making sure people were operating at the appropriate level.