Yosemite National Park: A Day in the Yosemite Valley

If you have only one day in Yosemite, you should focus on the Yosemite Valley.  It may be packed during the peak season, but it is the reason people come to Yosemite.  Going early and going on some of the more difficult hikes will mitigate the crowds.  We just spent a weekend in Yosemite, so on Saturday we saw the Yosemite Valley sights, and on Sunday we explored Tioga Road area.  This could be a great plan for you as well.

Merced to Yosemite via Highway 140

Our morning started at a Merced hotel around 5:30am. Why Merced? We were coming up after work on Friday evening, and weren’t sure how late we would be, and wanted to avoid narrow mountain roads after dark. This wasn’t necessarily an ideal choice – closer in would have been nice (e.g. El Portal), but booking the week before limited our options.  In any case, after packing up and getting breakfast, we made it to the Yosemite entrance by 8:00am.

As we entered the Yosemite Valley, we made a few quick stops at pullouts to snap some pictures, and admire the initial sights like El Capitan and Bridalveil Fall. 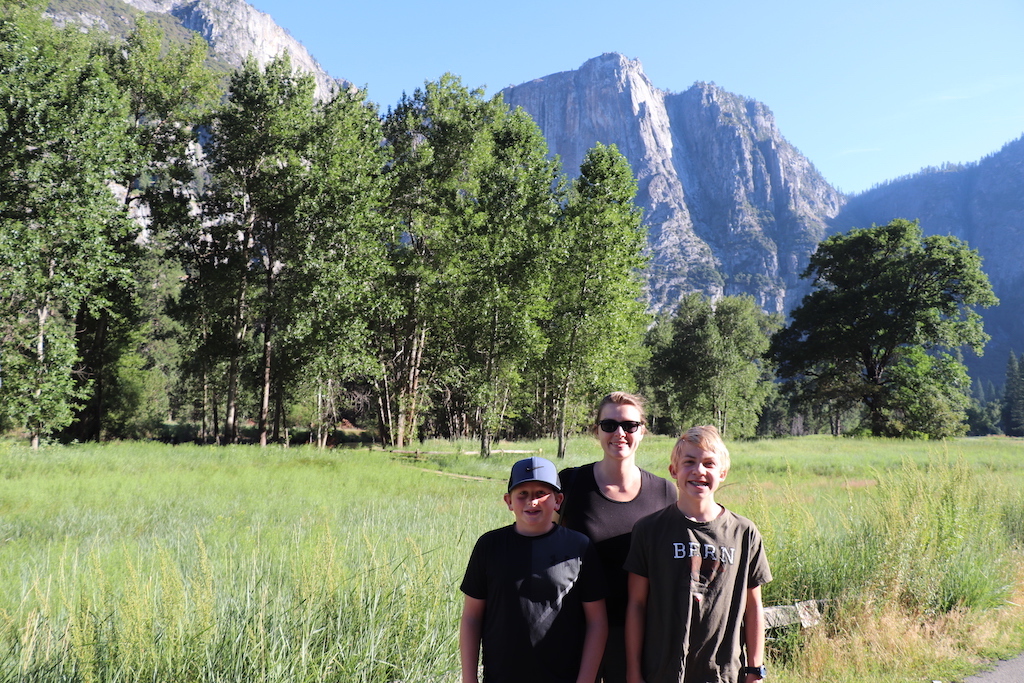 The views of the mountains were quite impressive and we knew that later in the day the pullouts might not be as easy to access. 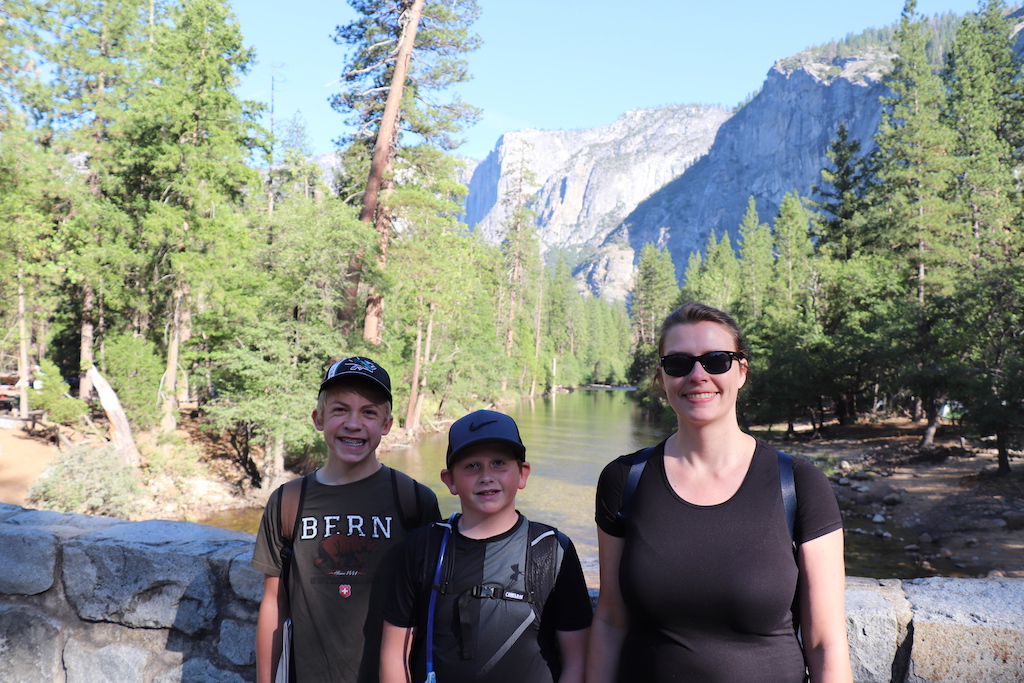 We decided to bypass the main Visitor Parking area and see if we could get a little closer to our desired trailhead.  We were in luck!   The small parking lot at the North Pines campground, stop 18 on the shuttle, still had plenty of availability and a lovely beach for a picnic later on.  Perfect!

Having read a Yosemite guidebook a few days before the trip, we planned to spend the morning hiking the Mist Trail. It’s a reasonably popular trail that’s roughly 3-4 hours round-trip, goes right next to a waterfall, and has 1,000+ feet of elevation gain.

Making sure that we each had about 2.5 liters of water, we locked our car, throwing a package of Oreos into one of the backpacks at the last minute. We nearly forgot our hiking boots – which are somewhat recommended given the wet conditions.  We found a sign that said it was about 0.8 miles to the trailhead, so we started along that until it took us to the road. 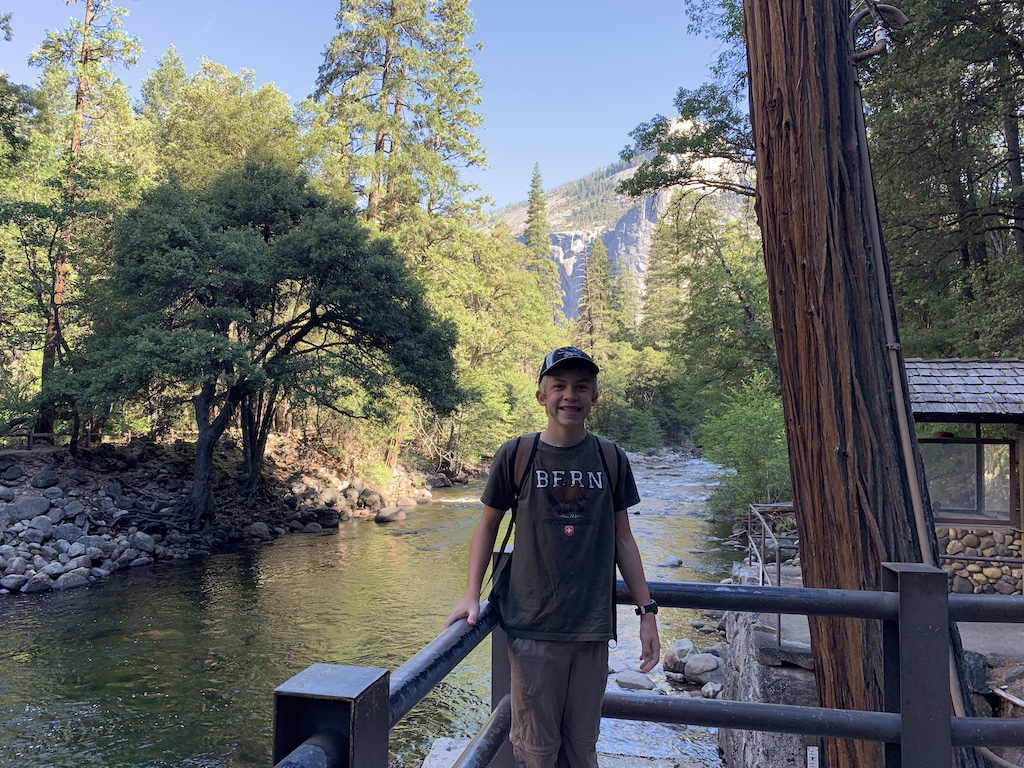 A short while later, we saw a much cuter path along a stream and made our way down to that. 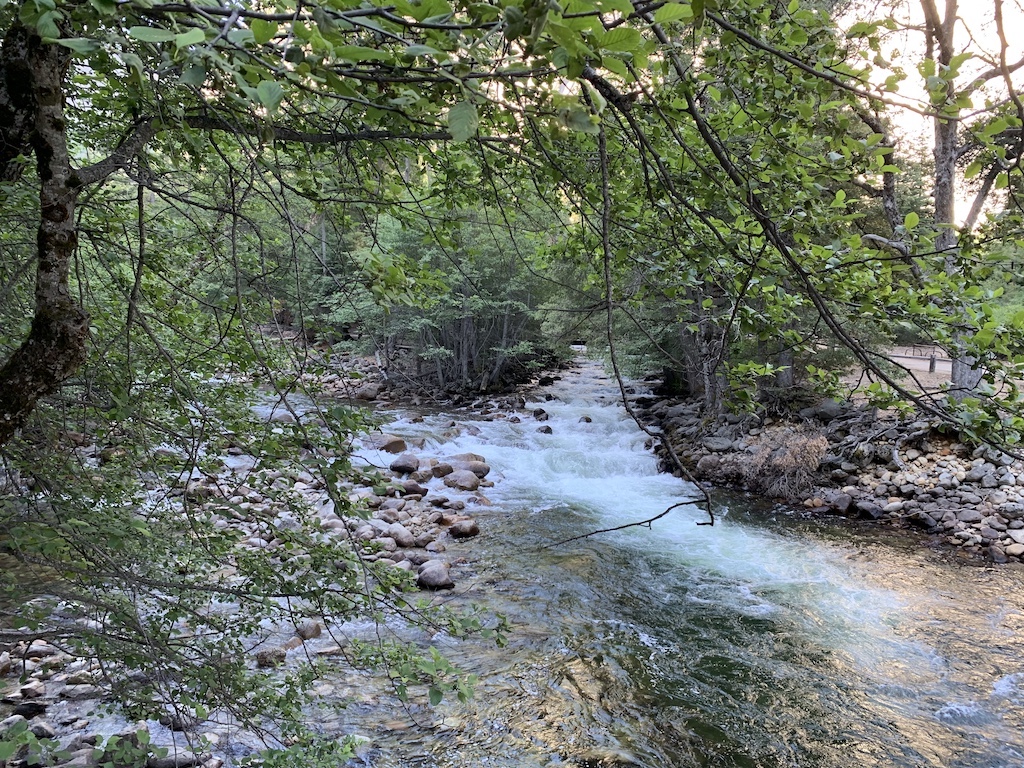 Then the real trail began.  I really liked some of the gigantic boulders at the beginning.

Up, up, up.  At first it was paved and the boys wondered why we weren’t wearing tennis shoes. 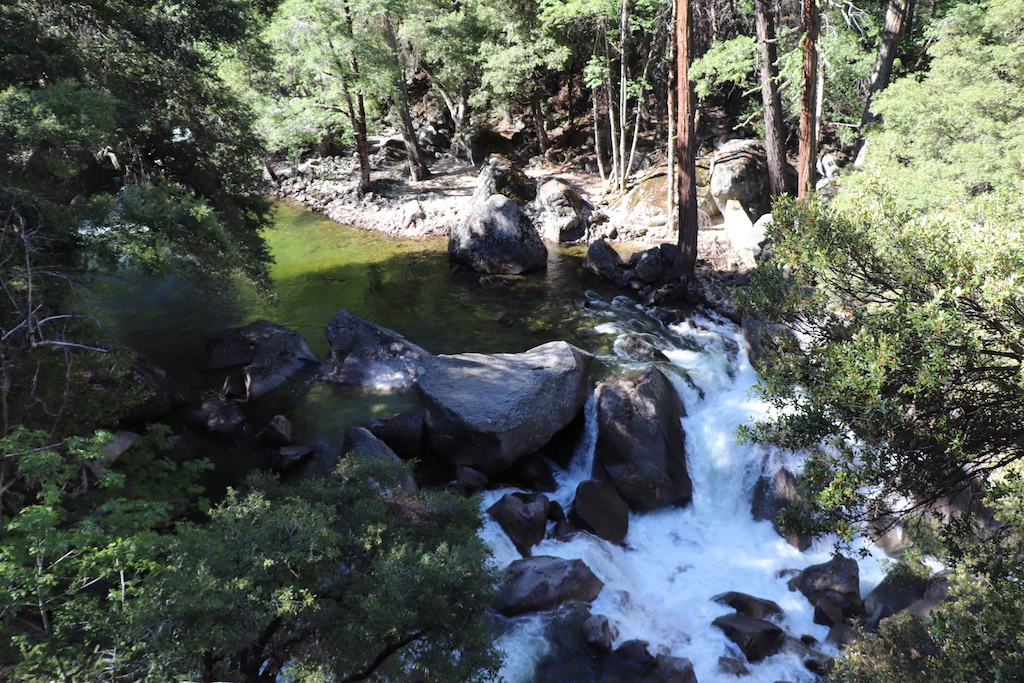 The views of both the river and the mountains were fairly imposing. 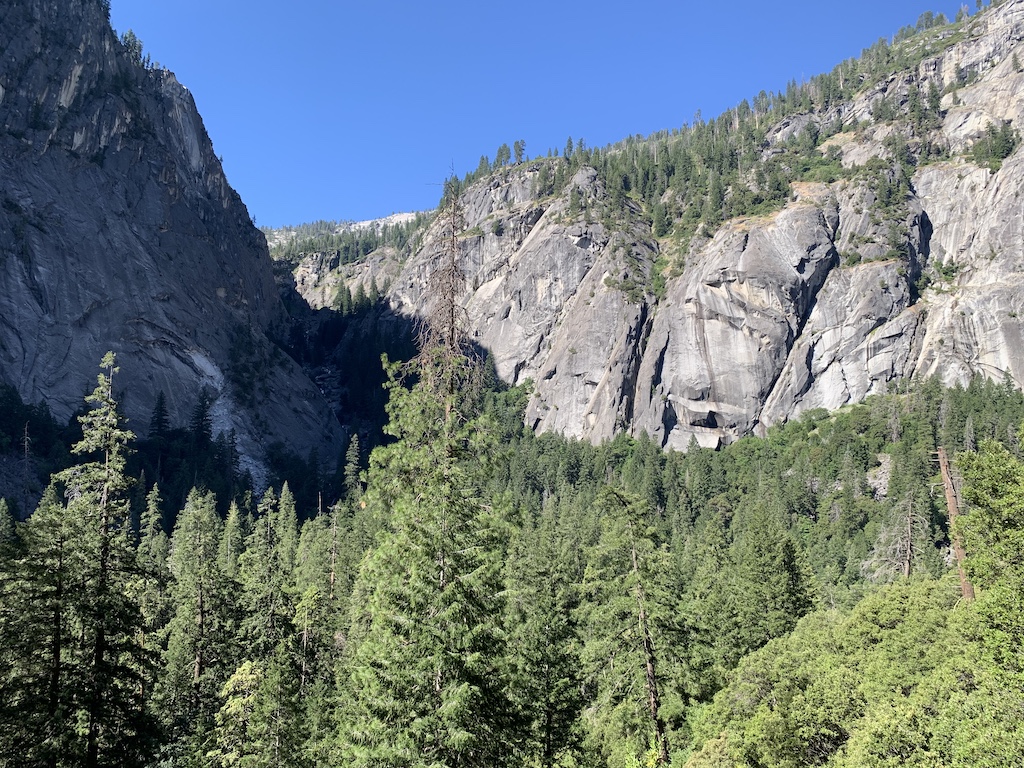 There was a bridge with a great view of the Vernal Falls in the distance. 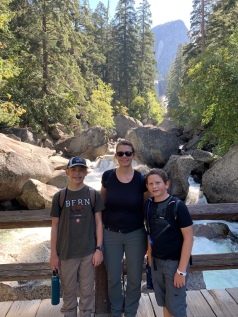 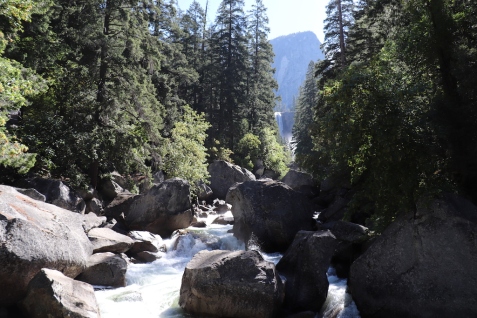 We were having a lot of fun! 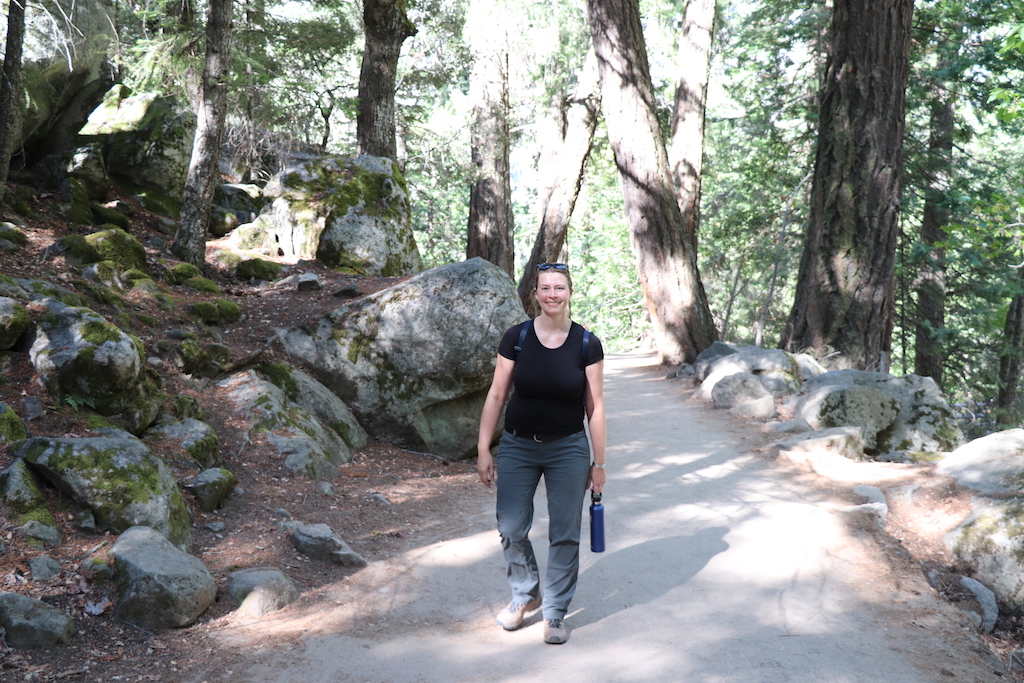 Then the mist began.  What fun! 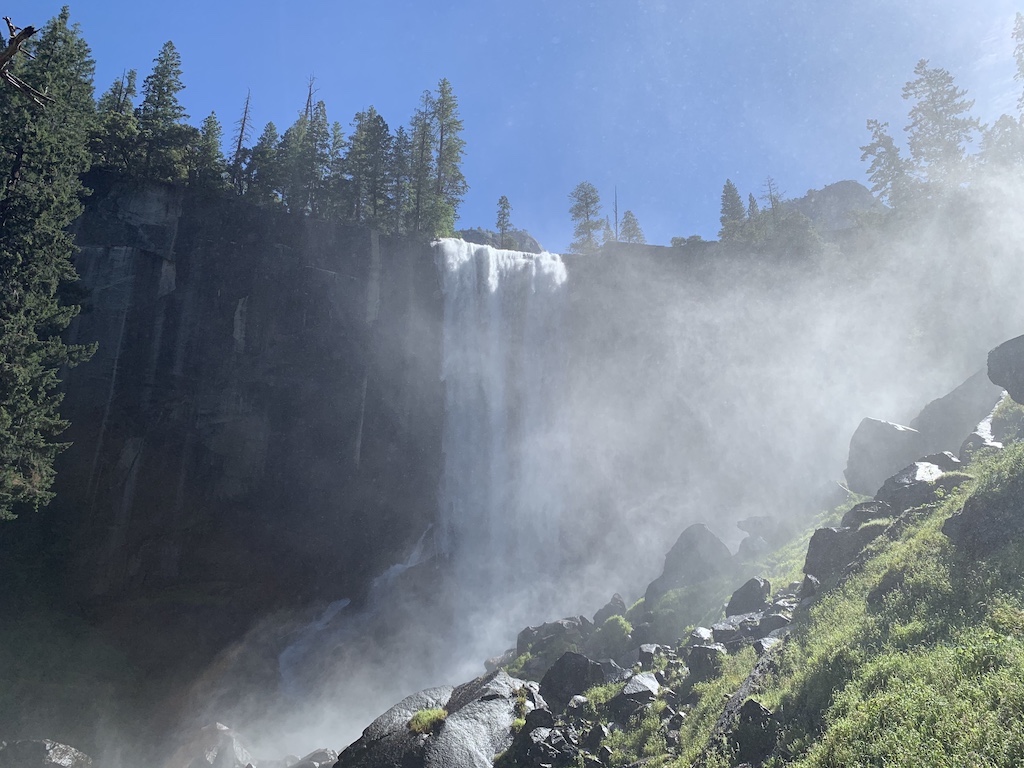 The trail turned to slippery stone steps.  Hiking boots were quite useful!  John was delighted and claimed that this was one of his favorite hikes ever. 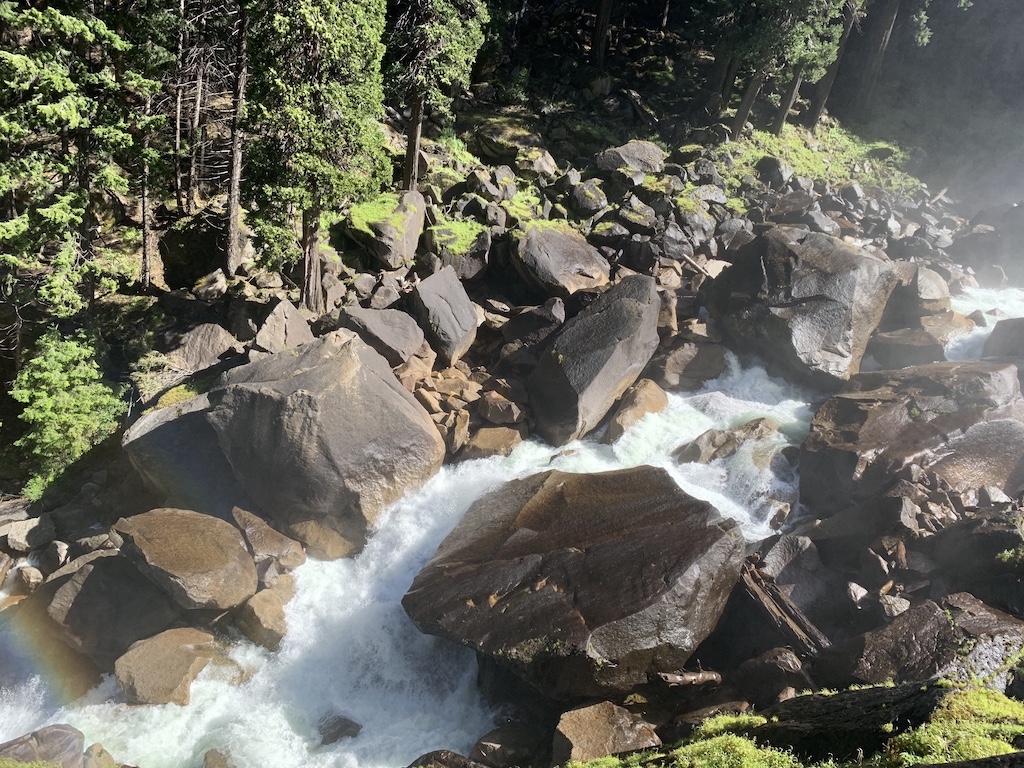 Between the mist on my face, the uneven steps, the steep drop off, sinus pressure from my allergies, and the exertion, I started to get a little dizzy.  We stopped in a couple of places to rest and get some photos. 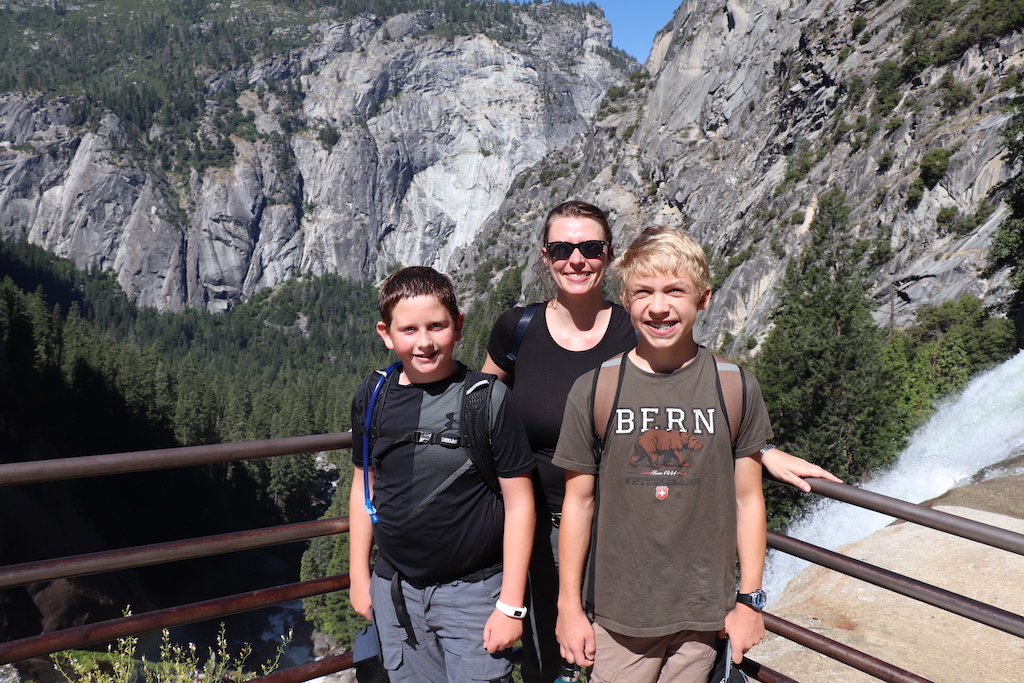 The rainbows were beautiful. 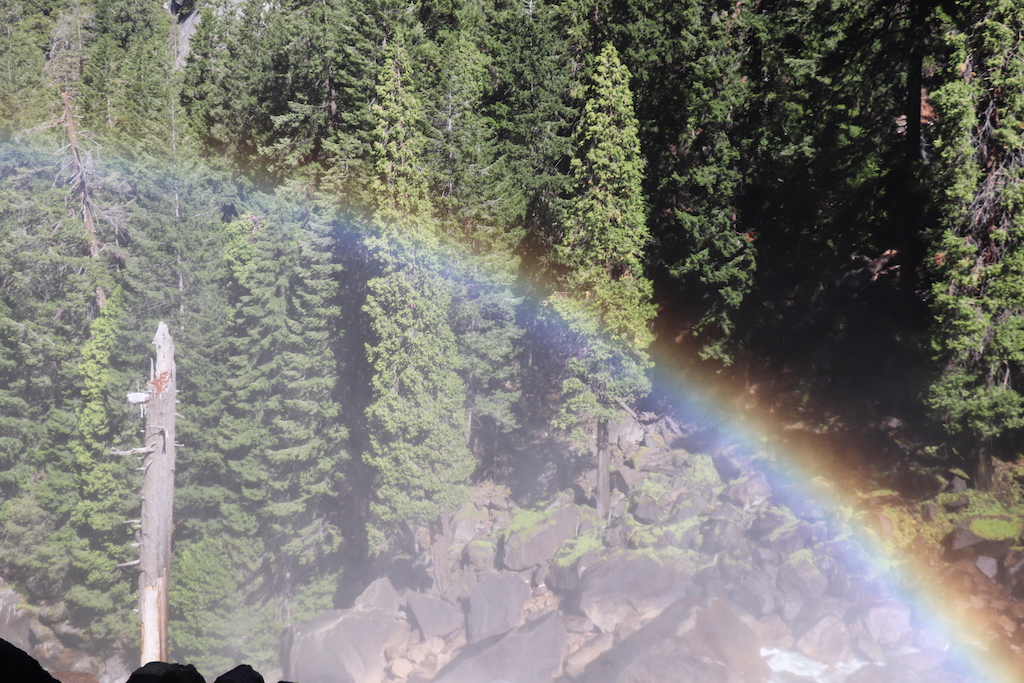 Eventually, we made it to the top.  The signs lower down warned of people swimming, or even just wading, at the top, and falling off the waterfall suddenly made sense.  It did look like an awesome place to get a selfie, and a fun place to swim, but we could totally see it happening. 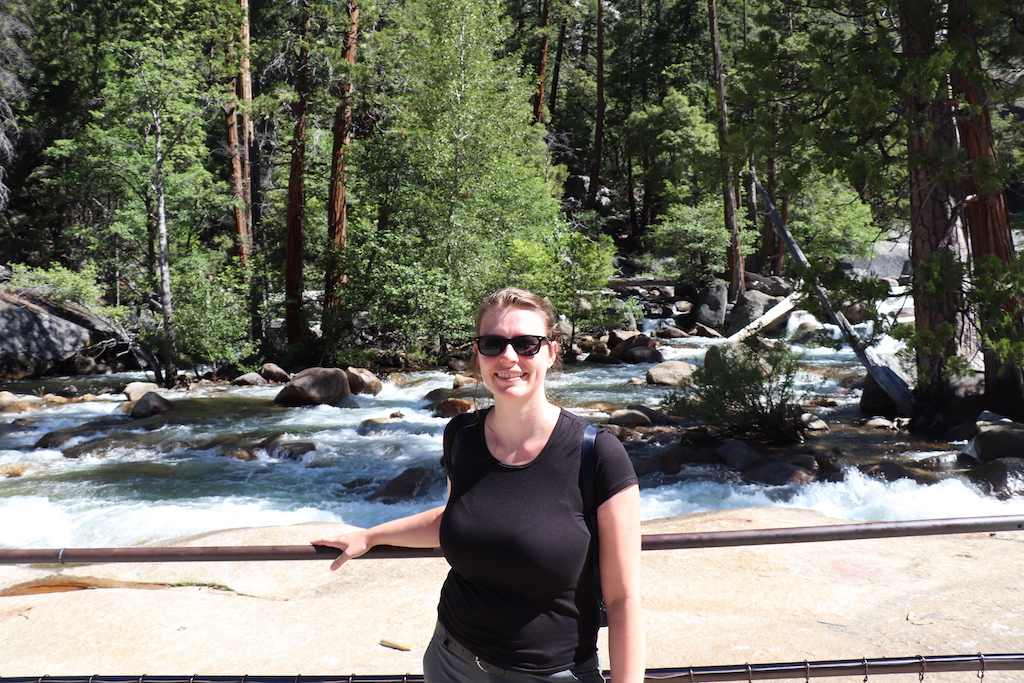 In fact, later in the day we saw some helicopters hovering around the Bridalveil Fall.  As it turns out someone died there a few days before.  Not sure if the helicopter was related.  Sad, but a poignant lesson for the boys.

The top of Vernal Fall has a really nice picnic area with lot of rocks that double as seats.  We decided to break out the Oreos.  The very fat squirrels also thought this was a great idea and got way too close to comfort. 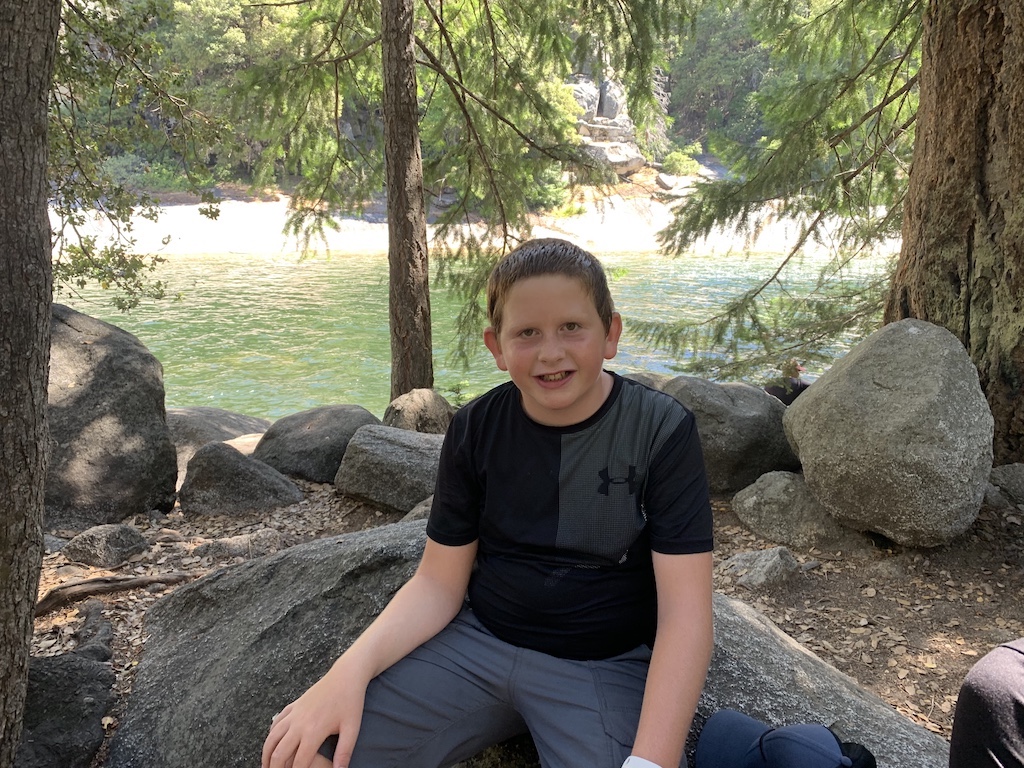 If you read many of our India posts, you will know that we have a strong fear of rabies.  Later, we were reading a warning sign by the bathrooms and saw it wasn’t so much rabies that we should have been worried about, but forms of the plague!?!

Eventually, my dizziness started to go away, and we decided to continue to the John Muir Trail and take that back to the valley.  If we would have had more energy, we could have continued to Nevada Fall. 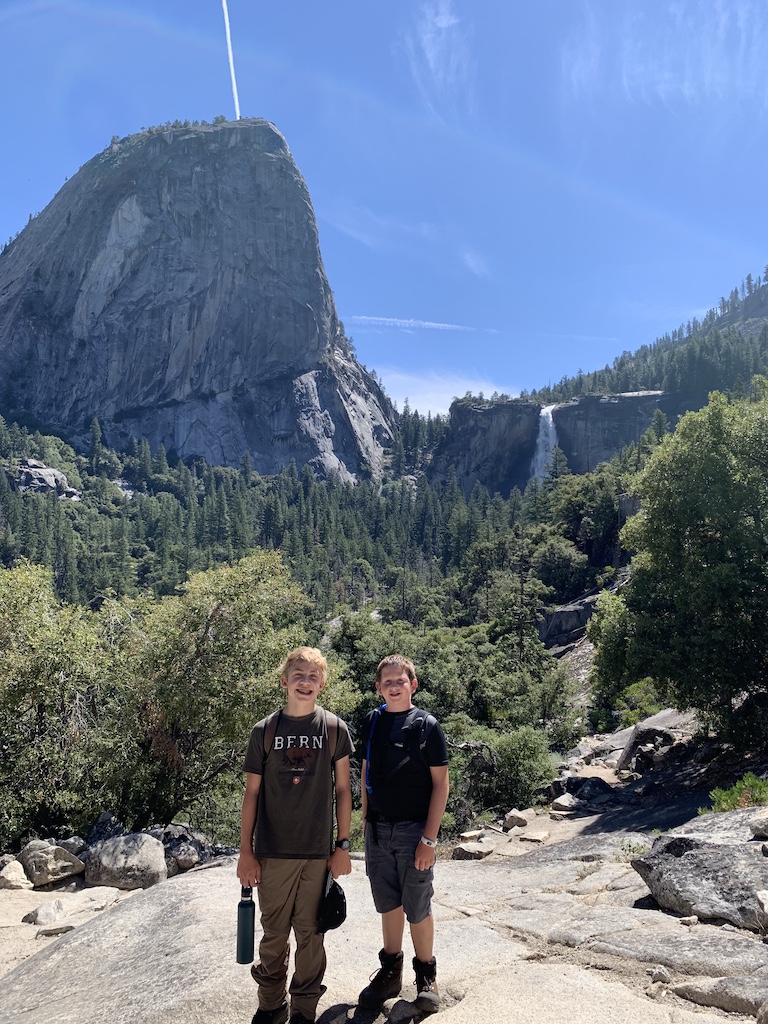 To my surprise, the trail continued up and up and up until we reached Clark Point.  1,300+ feet of elevation gain!  We were expecting 1,000 ft, so it really wasn’t all that much more, but with concern over the dizziness I was crankier than I should have been.  But we did get some nice views of Vernal Fall from above. 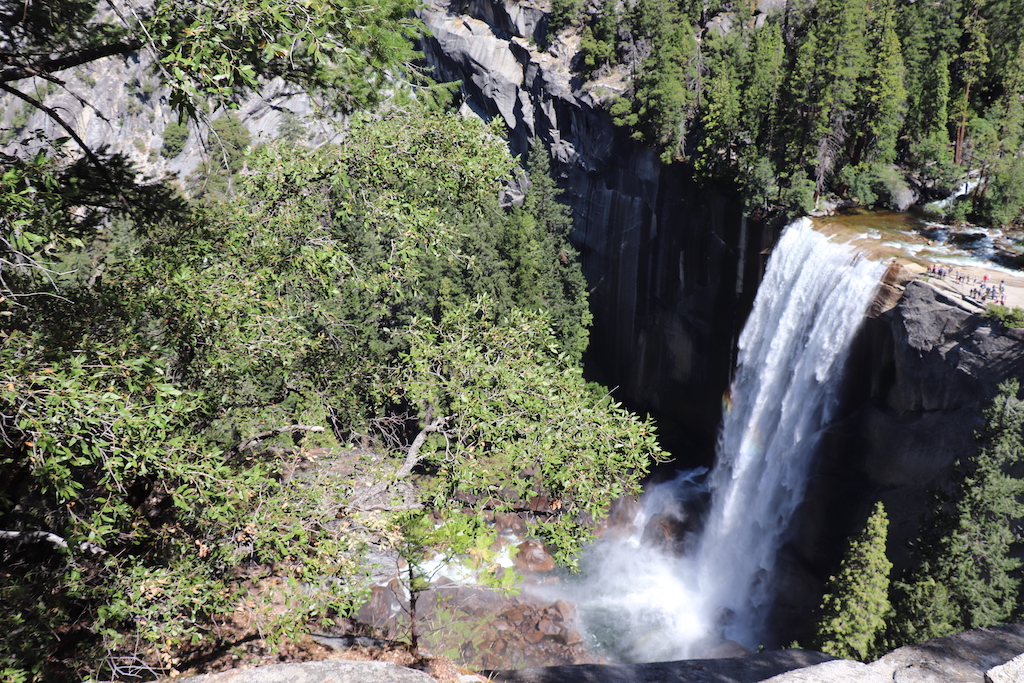 The views of Half Dome were nice.  Maybe once the boys are a little older Jeremy will try it with them.  I’m not sure I would be up for it.  16 miles with 4,800 feet of elevation gain.  No, thank you! 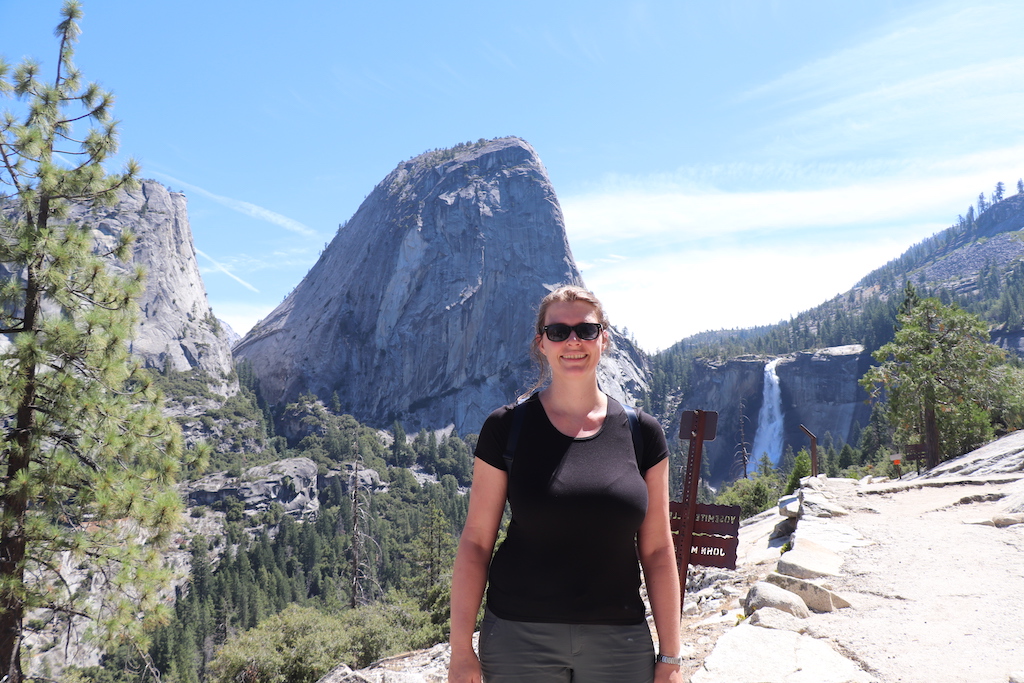 The walk back down was quite pleasant, with very few other hikers.  In contrast, the way up was a little crowded, but since we started early, it really wasn’t all that bad.  Once the John Muir trail joined back up with the base of the Mist Trail, the crowds were back.  Almost shoulder to shoulder hiking.  That was what I remembered from 10+ years ago, and was why I had little desire to come back.  Fortunately, that was a small section of the hike and my opinion has now changed.  Yosemite really is worth seeing and if you get an early start, you can avoid the worst of the crowds.

After returning to the car, we picked up our lunch and a picnic blanket and walked to the beach next to the campground.  The boys played in the water while I made sandwiches.  We sat there for a while, but the boys got jealous of all the people who had rafts or inner tubes and were floating down the river.  It did look quite fun.

I could have sat there all day, but Jeremy wanted to see more of the valley. Typically, once you park in Yosemite Valley, it’s best to just leave your car and take the shuttles, so this is what we did. The bus we hopped on was quite crowded, though – we barely fit on. We took the bus to the Visitor’s center and admired the views of Half Dome. 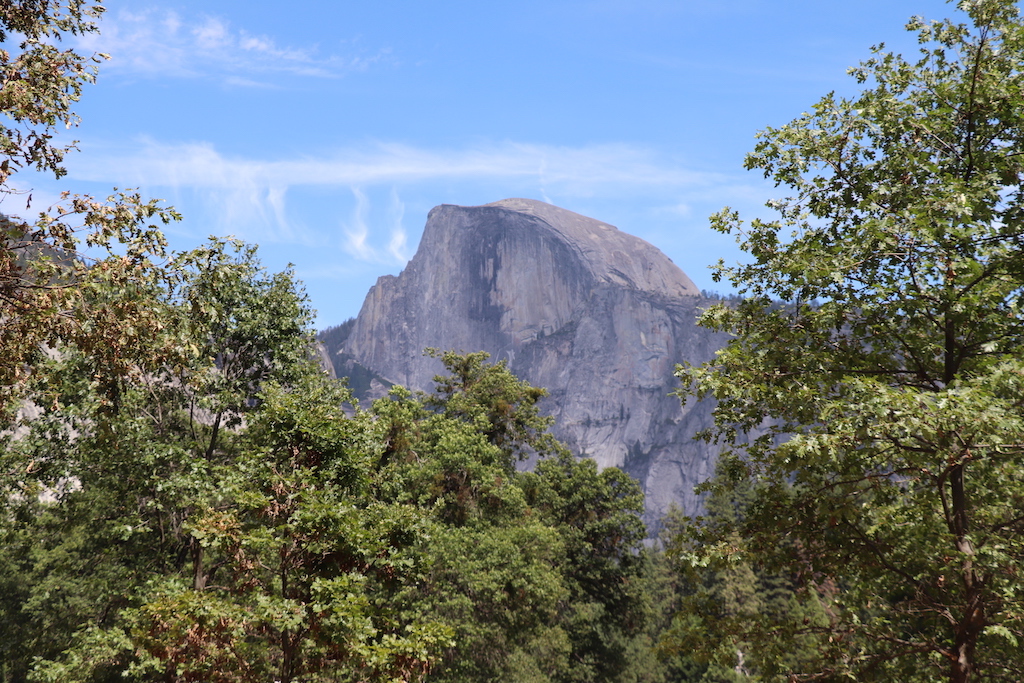 We started with the exhibits in the main visitor’s center, then watched a movie about Yosemite.  Next was a museum highlighting artifacts from the Native Americans who called Yosemite home.

At this point, we decided to hike to the Lower Yosemite Fall.  The beginning of the trail is on a boardwalk.  The crowds aren’t bad between the Visitor’s Center and the shuttle stop, but once you get to the shuttle stop, this will change. 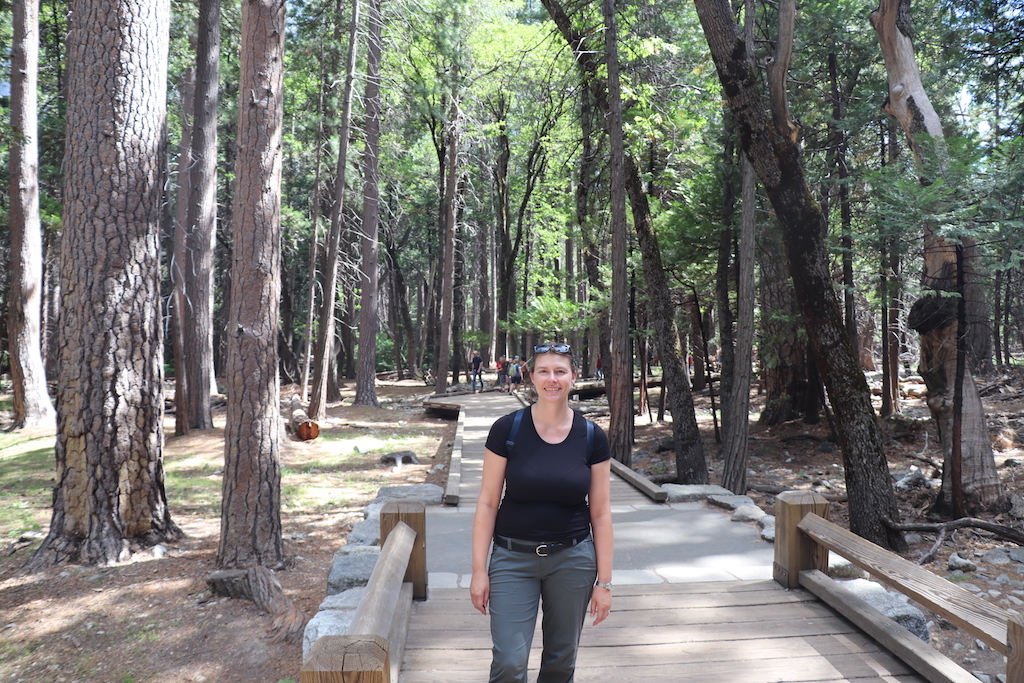 At this point, while the trail was nearly flat, we were starting to feel a little tired from a long/early day. 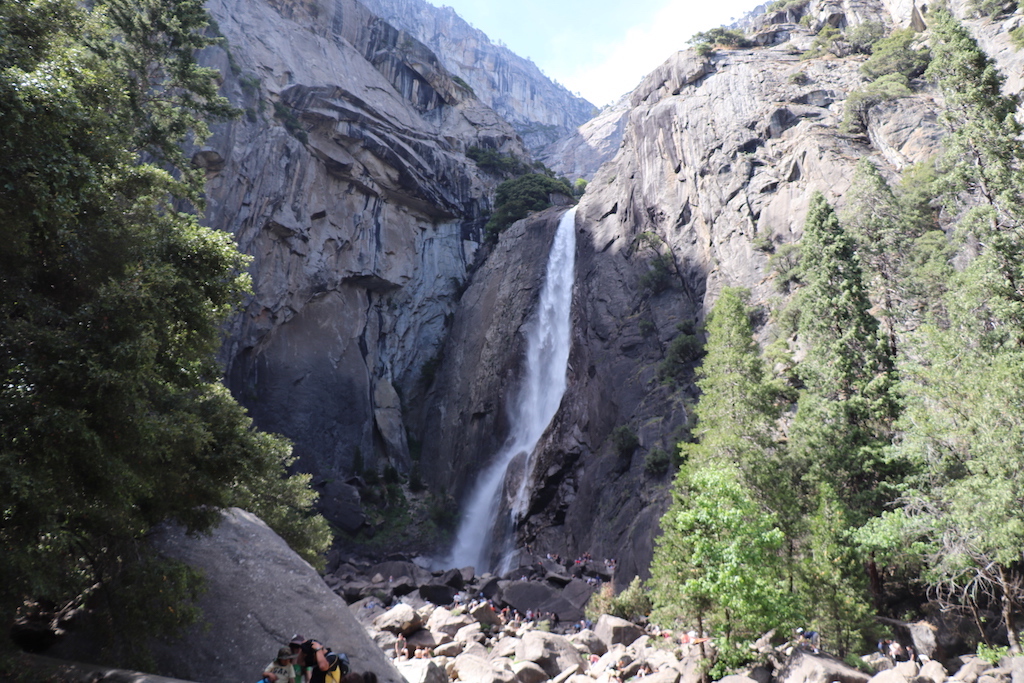 Afterwards, we decided to head back to the Visitor’s Center and hop on the bus.

The Drive to Buck Meadows

When planning, we had thought about driving to Glacier Point. It could have been interesting, but at this point, it was after 4pm and we were starting to feel tired, and that we’d seen enough for the day.

After picking up our car, we started heading out of the valley. In one point, the traffic slowed, but we realized that it was because of a bear! Alas, we didn’t have our cameras out.

We made our way outside the park to our “camping cabin” in Buck Meadows, about 45 minutes from Yosemite Valley.  Given that we only made reservations a few days before, we were fortunate to find someplace not excessively far away.

More from Adventures of the 4 JLs!

National Parks in the USA:

National Parks around the World