For our kids’ spring break this year, we decided to stay in an AirBNB for the week near the water at Newport Beach, in Southern California. While we do have beaches in the Bay Area, they’re relatively cold and cloudy compared with their southern counterparts, and we’ve been meaning to take the boys down there for some time. Keep in mind that the Pacific Ocean water is always relatively chilly, but definitely warm enough for our boys.

Instead of hauling straight down I-5 through the central valley, we decided to take the slightly more interesting coastal 101 route, and stop at a few places along the way. Note: there was no intention to be exhaustive – there are lots of neat places to stop!

This is the first post of 3 about getting there and things we did down there.

We actually started our trip down Friday night, after school/work/dinner. This was a relatively uneventful trip out of the Bay Area, roughly 3 hours down 101. We wanted to concentrate our time on Saturday on parts of SoCal that we haven’t been to recently. So, while some towns like San Luis Obispo and Pismo Beach on 101 are nice along the way, we intentionally skipped past them, spending the night at Santa Maria, which is mostly just useful for cheap hotels (often via Hotwire.com). With this overnight, we could wake up roughly an hour north of Santa Barbara and focus on that area.

The next morning, our first major stop was in the faux-Danish town of Solvang, followed by a stop at the La Brea Tar Pits, lunch in Little Ethiopia, and a drive through Beverly Hills.

The town of Solvang is a nice place to stop while driving along Highway 101.  Since it was about a 35 minute drive from our hotel in Santa Maria, we decided to find a bakery for breakfast.  Of course we also had to pick up our usual bucket of butter cookies on our way out.

While in this town, windmills and cute Danish style homes abound. Lots of shops and kitsch as well. It’s a fun town for a quick stop, though lingering too long might be a bit much.

From there, we continued on Route 154 over the Santa Barbara Hills, which were unusually green given all the recent rain, and we drove past the beach towns of  Santa Barbara and Ventura, and towards Los Angeles.

Since we knew we were planning to have a lot of beach time, we decided to do something completely different and make a stop at the La Brea Tar Pits. Upon entering, the kids were fascinated with the exhibits showing how the  animals would become entrapped in the pit and ever-so-slowly sink, families watching from the side.

Inside the museum, there were quite a few exhibits showing some of the skeletons that were recovered from the tar pits.

And other exhibits showing the predator/prey situation.  Once the prey became stuck, predators would happen by, see easy meat, and would often get stuck themselves.  Lucky predators might get away with a leg, or some other chunk of meat, but it was mostly death grounds.

The kids (and I) were fascinated by one exhibit that showed how difficult it was to remove a limb from the tar.  It can be done with enough force, but when in a panic, severe struggles would send the animals to their sides and they would be in an even worse situation than they started.

On the way out, the kids enjoyed one more sculpture of a now-extinct sloth.

As it was getting a little late for lunch, James decided to check out what was nearby, and discovered that “Little Ethiopia” was a half mile south of us.  So delicious!  We found a parking spot, wandered by maybe 10(?) different Ethiopian restaurants, and picked a place that proudly displayed a picture of  Tony Bourdain visiting there.  Definitely a good choice!  The food was delicious and the atmosphere lovely. 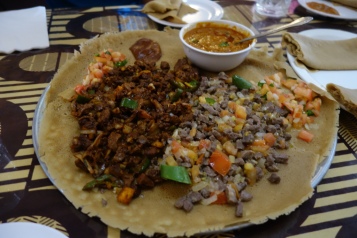 If you are unsure what to order, go for the spicy lamb tibs.  So delicious!  John always likes the vegetarian Shiro (chickpea based).  Plus we usually get a 2nd meat, often times a less spicy beef.  And what kid doesn’t like permission to eat family style with their hands?  Simply tear off a piece of the crepe-like injera (a sour bread made from teff flour) and pinch/scoop up your favorite morsel.

With two pre-teen boys, we marveled at how much they were able to eat and even though we only ordered 3 items, left feeling stuffed.

Since at that point we were right next to Beverly Hills, we decided to drive the boys through there.  The boys grumbled a bit until we told them to keep their eyes out for someone famous.  While we didn’t spot anyone, the boys thoroughly enjoyed looking at all the fancy cars and huge houses.

On Rodeo Drive, James observed that some of the people looked like they were dressed a lot nicer than normal.  Then when we drove through some of the neighborhoods, they decided that this would be an excellent place to move.   The houses were incredible, and I am fairly sure that we weren’t even in the super nice section.  One house, in particular, had a chandelier in the foyer that made the kids oooh and aaah.

After that, it was getting closer to the 3pm check-in at our AirBNB, so we got back on the freeway, noticing the heavier afternoon traffic. Since our intent was to do some cooking, we stopped at a grocery store a few miles short of the apartment in Costa Mesa, to stock up on milk, eggs, meat, and produce.

Upon arrival, we were quite pleased!  A lovely balcony, right on the beach.  The one-bedroom apartment appeared to be very recently renovated and was beautiful.  There really wasn’t much more to ask for.  Definitely an awesome place to spend a week!

With light traffic, it’s possible to drive from the south Bay Area to Orange County in roughly 6 hours. That said, light traffic doesn’t exist on Friday night at 5pm. We usually either try to leave either before 3:30pm or after 7pm, but the “after dinner” time is typically less stressful for us. In this case, our intent was to drive about 3 hours and do about half of the distance.

If you are looking for a mid-point on the central California coast area with some atmosphere, think about stopping in San Luis Obispo, Morro Bay, Pismo Beach, or Solvang. We’ve overnighted in most of those towns, and there are plenty of interesting things to see in that region, from Hearst Castle to Santa Barbara.

That said, for just an overnight pit stop like this, one of our typical places to stay on the way down to  LA is Santa Maria. It isn’t directly on the beach or a super cute touristy town, and there are much better towns to spend your time in. But its hotels are often somewhat cheaper than the surrounding towns, and it fits our criteria of proper distance from our starting point. For instance, this time we stayed in a perfectly reasonable Holiday Inn that we booked on Hotwire.