This post is the second part of our 3-part writeup of our kids’ April 2019 spring break in Southern California.

Our typical travel style is somewhat more intense than hanging out at an Orange County beach for a week (e.g. first time we went to Oahu, we ended up in a week driving 500 miles!), but we thought we’d share about this experience, and what we found to do there.

After a morning of visiting Solvang, the La Brea Tar Pits, Little Ethiopia, Beverly Hills, and a grocery store, we arrived at Newport Beach late afternoon.

Upon checkin to our apartment, we were quite pleased!  A lovely balcony, right on the beach.  The one-bedroom apartment appeared to be very recently renovated and was beautiful.  There really wasn’t much more to ask for. 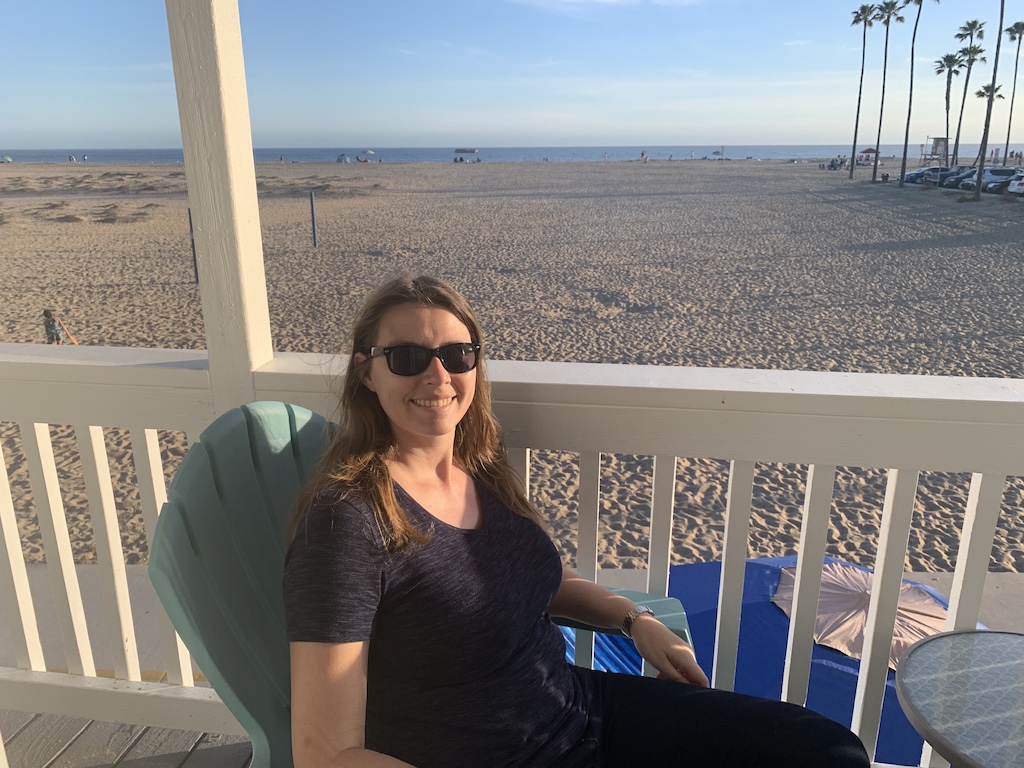 After putting a week’s worth of groceries away and settling in, we decided to take a walk to the nearby pier.  The kids were fascinated by all the fishing.  One person had even managed to pull in a crab!  I had no idea you could catch crabs with anything other than crab pots.

The kids were also delighted by the sea lions swimming back and forth.

We went back to the apartment for dinner.  With a heavy lunch, a nice salad and a store bought baguette was both easy and perfect.  And of  course the boys decided to break out the ice-cream boxes.  I’m a little afraid of how they will eat once they are teenagers…

We had brought the kids scooters in the car (bonus for driving rather than flying), so we decided to pull them out for a sunset walk on the beach.  Beautiful!

On the way back to the apartment, we scouted out the neighborhood.  There were a ton of restaurants, a liquor store that also had a few overpriced market items, a bunch of bike/surrey rental shops (we later learned that the surreys aren’t supposed to be taken on the beach bike path), and some beach/souvenir shops.  Good thing we already did our grocery shopping!

We started the morning by mixing up some Bisquick and making pancakes. After the long day the previous day, we didn’t exactly wake up super early. Since we try to visit a church if we can while traveling, we visited a nearby branch of the Saddleback Church, which is headed by Rick Warren, author of the Purpose Driven Life.

Heading back to our apartment, we made some hamburgers for lunch.  While I was cooking, the boys enjoyed zipping around on their scooters.  Having a place right on the bike path is quite nice! 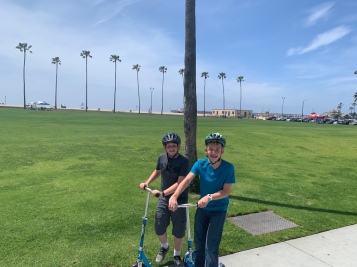 After lunch, it was warm enough for some beach time!  After setting up, the kids headed straight for the water.  James prefers just splashing around, while John prefers his body-board.

Once the water became a little too cold for them, they headed for the nice, warm sand.  We were situated on a mezzanine between two hills, so James throughly enjoyed warming up by shake-and-baking… 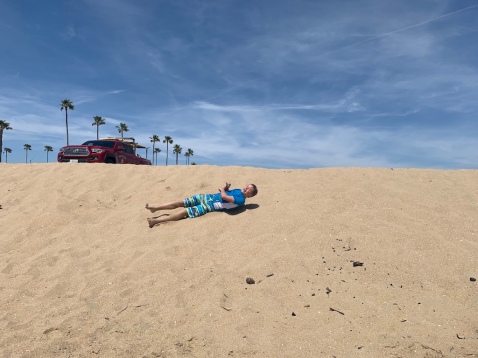 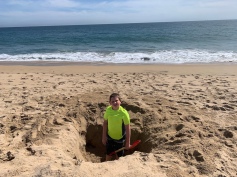 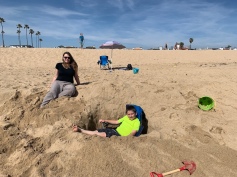 It actually got quite large.  Too bad that we forgot to take a picture after John moved the beach umbrella into it!

After cleaning up at the apartment, we decided to take another walk and scooter ride.  We ended up going quite a ways and discovered another market that didn’t look any bigger than the first.  But, the walk was super fun.

Later, we enjoyed another dinner on our balcony, watched the sunset, then took another evening walk along the beach to enjoy the last remnants of its beauty.

With the sun down, and everybody exhausted, the kids decided that Netflix and ice cream were the next order of business, so we went with that plan.

Our morning began quite early when poor Jeremy had to say goodbye, catch a flight home, and go back to work.  But, lucky us!  We still had almost a whole week left here!

After getting a little more sleep, we had a quick breakfast, then headed out into the fog for a nice beach walk.

The first order of business was to see what happened to John’s pit.  He was sad to learn that the tide got it. 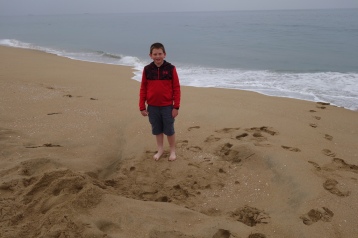 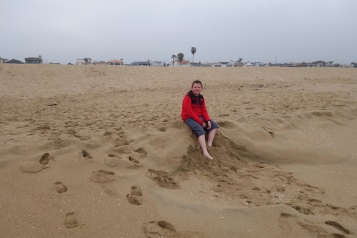 Continuing on to the pier, we decided to see if our favorite sea lions were still there.  We were delighted to watch the sea lions trying to steal the fish from the fishermen. 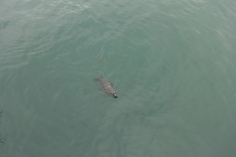 Sea lions weren’t the only animals at the pier, we also found several nice birds. 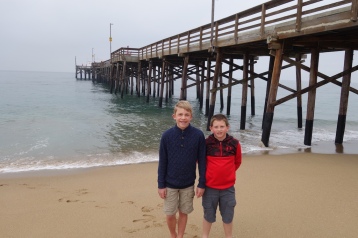 In fact, there was a family of sandpipers that joined us for the ENTIRE walk away from the apartment. 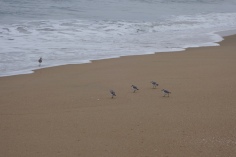 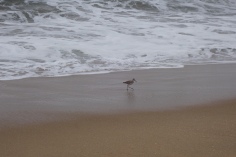 After walking for close to an hour we decided it was time to head back.  James was delighted when he saw some dolphin fins!  Then they breached a couple of times!  Unfortunately, they only surfaced a couple of times and I wasn’t able to get a picture.

But the boys had tons of fun playing with the driftwood.  John started out by marching and banging sticks together, singing a wake-up song of his own invention. 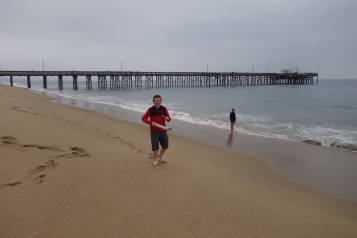 They also spent a really long time playing fetch with the surf. 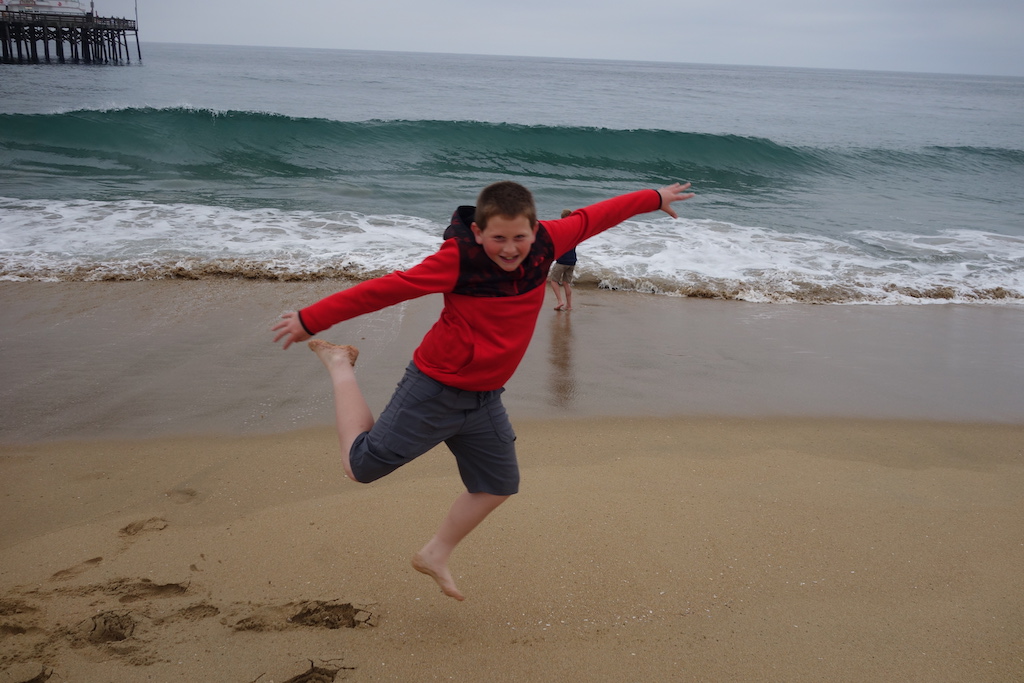 We spent some time enjoying the balcony, then had an early lunch.  John decided it was a bit too cool to go back to the beach and that what he really wanted to do was go to a Trampoline Park.  So we headed out to Laguna Hills to use a handy 1 hour coupon at Big Air.  The kids loved it! 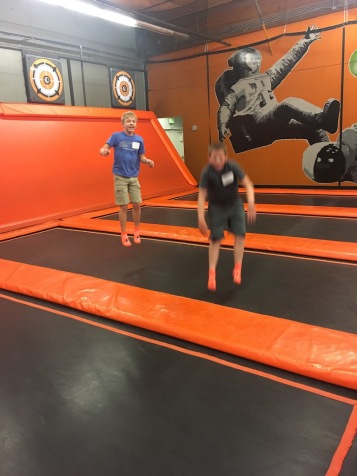 Not only did they have a ton of different trampoline sections, but they also had a climbing wall and a battle beam. 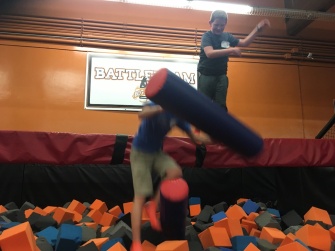 After arriving back at the apartment, more beach-time was in order.

Missing his “reading pit”, John decided to dig a smaller one, this time a bit higher on the beach. 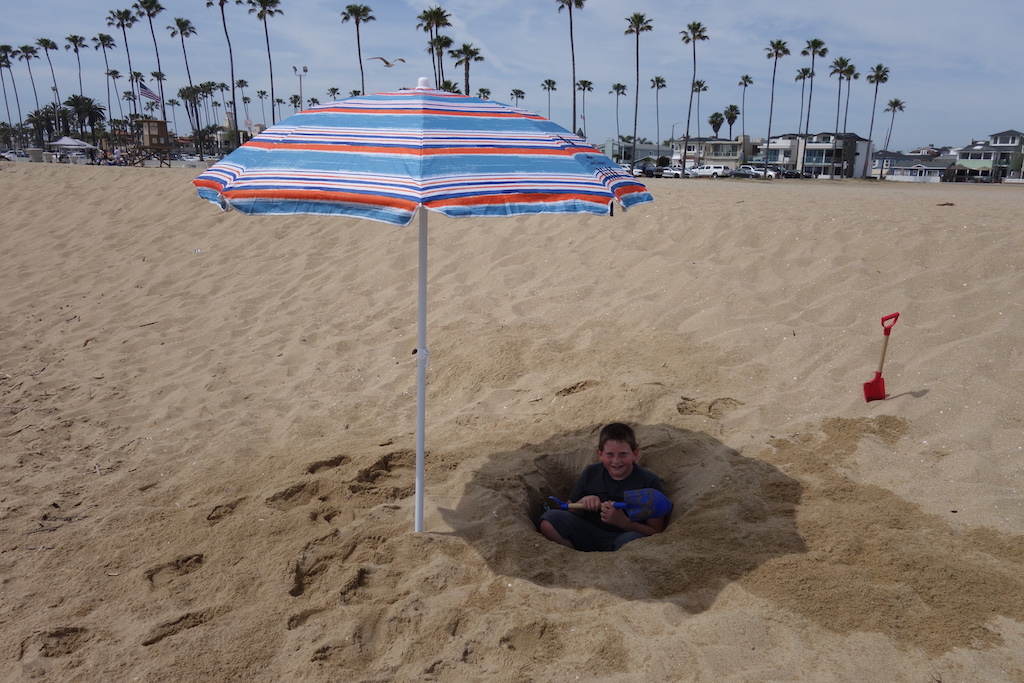 But then it gradually turned into a much bigger pit.

James played for a while in the water, then did some more shake-n-bake when he got too cold.  A fun way to warm up!  John later explained that the warm sand sticks to your skin and you can take it with you wherever you go.  Yeah.  Luckily our apartment has a little shower spigot on the outside.

For dinner, we made a mix of baked chicken (me and James) and baked sausage (John), both super easy while traveling.  Simply toss the chicken in olive oil, salt, and pepper and bake for 40-50 minutes at 400°F.  Add the sausage the last 20-25 minutes.  If you will be using pesto sometime during the week, add a spoonful of that as you pull the chicken out of the oven.  A bag of instant mashed potatoes is an easy addition.  The day before, we had made some tomato, cucumber, and bell pepper salad and had some left-overs.  To make the salad, just dice, drizzle with olive oil, and sprinkle with black pepper.  Lovely, yet simple beach-side dinner! 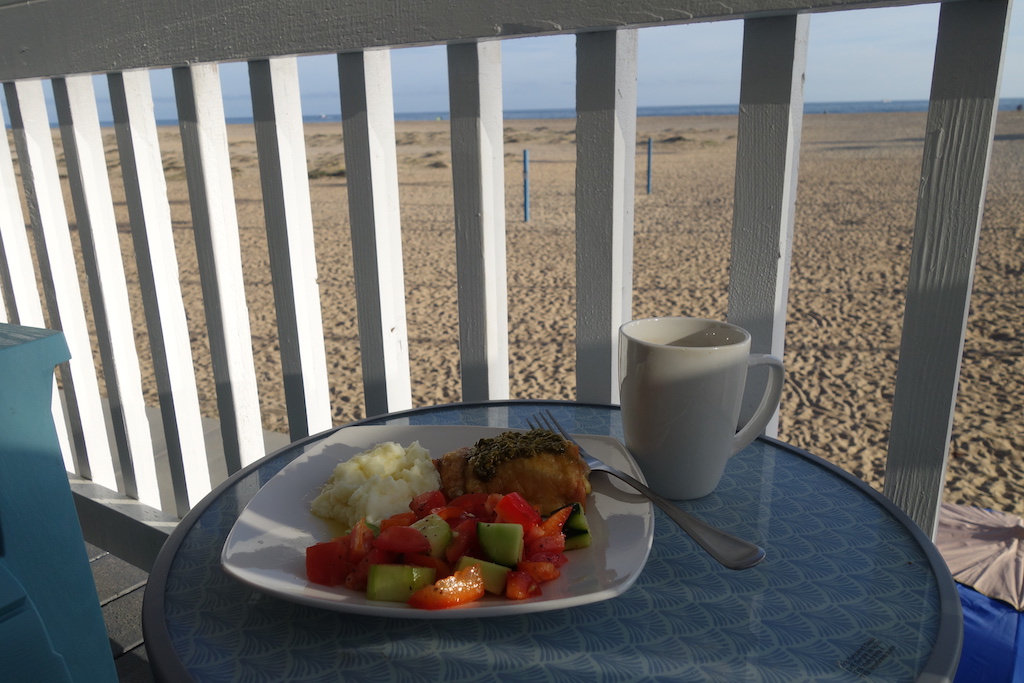 In the evening, John decided that he wanted to roller-blade, so James got his scooter, and after briefly considering borrowing John’s scooter, I put on my fast walking shoes instead.  A great end to the day!