This post continues the previous post, where I decided to try to bike a stretch of the California coast near our place.

We did this second, 50-mile section as a bit of a family endeavor on a Saturday. Jennifer  dropped me off in the morning at Half Moon Bay. Then, she and the kids spent the morning/afternoon at the beach while I biked the route. We did this during late October, when it was still (sort of) sunny enough to swim and play in the sand. (Note: Northern California beaches are always a little chilly, even in the summer).

I picked up the ride where I had left off previously – on the recreational trails near the water. There were many multi-use trails near Half Moon Bay, and people out enjoying them on the Saturday morning. I stopped at different overlooks, to see the coast. 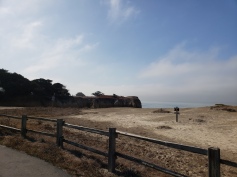 As the Half Moon Bay trails were coming to an end, I accidentally went on some slightly rougher dirt roads to get back to the main road.

Most of the day’s stretch ended up being on Highway 1, which was only 2 lanes and had reasonably wide shoulders for the most part. Then about 10 miles into the ride, it also had a fairly decent climb.

One mistake I made: I had donuts for breakfast. They sounded so delicious when I woke up, but by the time that I was climbing this hill by San Gregorio Beach, the sugar energy from them was rapidly evaporating. Maybe I learned my lesson from that.

The stretch along the coast was great. Lots of hills and vistas. Some wind gusts as well.

About 18 miles in, I turned off the highway towards Pescadero, a small town about a mile off the road, where I got a quick lunch at a grocery store. I was happy to fix my protein deficit.

I would have ordinarily gone straight back to the highway from Pescadero, but my GPS was suggesting a slightly inland route for a little while, which led through Butano State Park and various farms. I glad that I did this stretch – it felt very different from the rest of the day, and it added some variety. It’s hard to believe places like this exist so close to the Silicon Valley; it’s a very different atmosphere. The road was somewhat narrow, but there was barely anybody on this road. 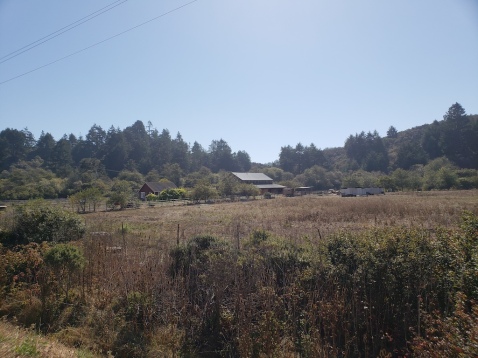 By the time the road joined back up with Highway 1, I was roughly half done with the day’s 50 mile route to San Cruz. The next stretch is probably the quietest along the three day route, and cell phone reception was surprisingly spotty along much of the way. It was enjoyable to stop at various points to admire the sea views. 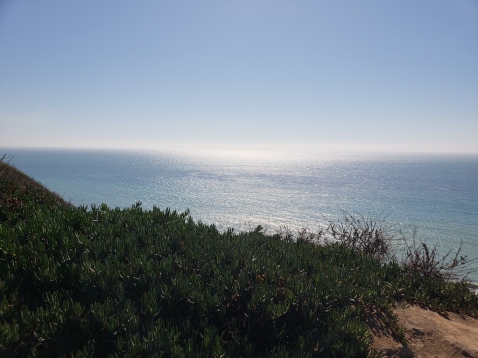 As the highway got closer to Santa Cruz, it did start getting busier again, and there were also a number of farms along the way. There were some bike trails again closer to Santa Cruz. Since I had planned to meet Jennifer in downtown Santa Cruz, I made the final stretch through the town, which was straightforward enough, though it had a little traffic in parts. 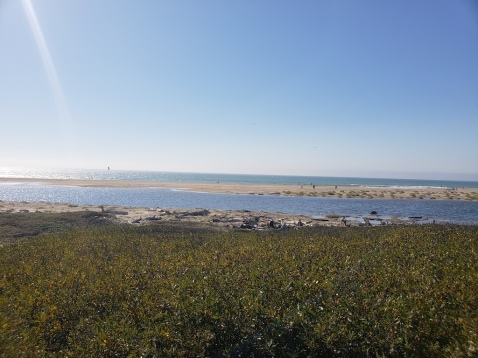 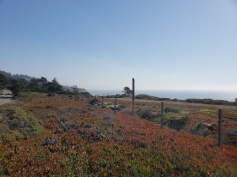 Overall, this was another very beautiful stretch of the coast, and somewhat more quiet and remote in comparison with the first and third sections. I’m glad that I got to see this.

Day 3 of 3: Santa Cruz to Monterey

The third stretch was delayed due to the air pollution from the November 2018 forest fires, various travel plans, and other activities. But we finally found a Saturday in December to do it. Particularly, Jennifer dropped me off in Santa Cruz, and then she/kids drove to Monterey, visiting the aquarium there while I biked the route.

I started off in downtown Santa Cruz, where I had stopped previously, and headed off from there. Initially, there was some greenery along the river by downtown, and my bike GPS took me along the path: 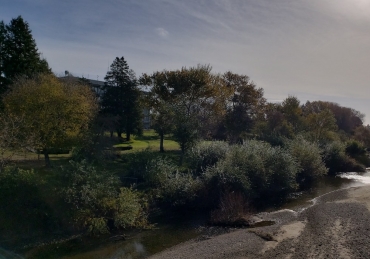 That said, after the relatively brief ride by the river, a good chunk of the next 5 miles along Soquel Ave, was less interesting – mostly passing by strip malls. Not particularly trafficy, but also not the coastal path that I had envisioned. Both the Bike Map and the GPS recommended this route, and staring at the map, I mostly of see why. It did get better after that.

Only about 5 of the 48 miles of the day was along Highway 1, and then only a 2-lane road. Most of the rest of the route was on a combination of side roads and farm roads, and the final 13 miles was on a dedicated bike trail.

After going through downtown Soquel and Aptos, the road was a side road that looked somewhat like the following, which was pleasant to bike on: 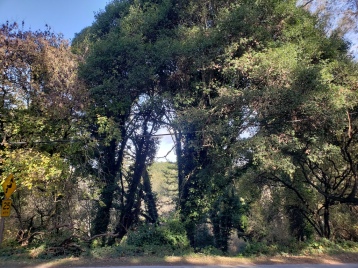 For a while, it still wasn’t the coastal route that I had expected, but more forest-like. There weren’t any big climbs, though some rolling hills along the way. The road then went by Manresa State Beach, which I stopped at to take a look at the view. I then went back on the forested road. 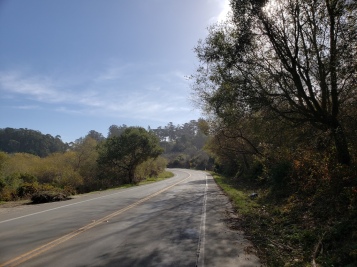 As the road approached Watsonville, the landscape changed from forests to farms. I saw strawberries and various greening fields. Given the recent rains, the rivers looked more full as well. For most of the day, there was a well-signed bike route to Monterey, so it would have been possible to largely follow the signs along the farm roads. 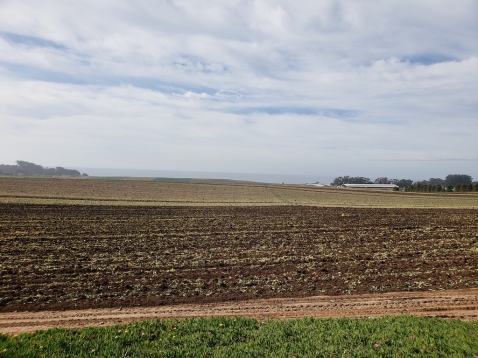 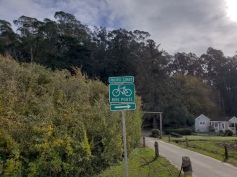 Once the path got closer to Moss Beach, the only choice was to ride on Highway 1, for about 5 miles. The shoulder was reasonably wide, though, and it was a 2-lane road, rather than a real highway in that section. I biked past the marina there, and got a quick lunch snack and some extra water at a shop along the way. After that, the route changed back to fields for a little while. 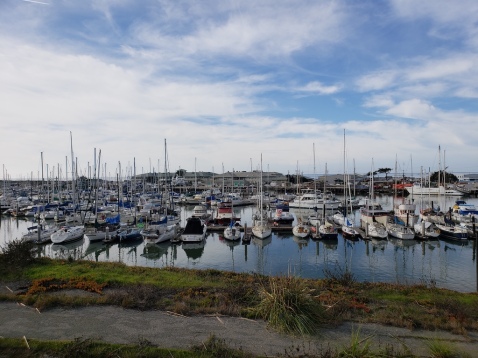 After following the farm roads for a bit longer, in the town Marina, there was a recreational bike trail for the remaining 13 miles of the route. It started off a little inland, and got closer to the coast over time.

As the trail kept going, it kept getting nicer as it approached Monterey. It passed sand dunes, various cliffs, and largely stayed relatively close to the coast. With the scenery, I’d definitely consider taking Jennifer and the kids back for a family ride on this final stretch.

Finally, the bike route entered Monterey, looping through the trees, past the main large park, and by the wharf. The trail was fairly uncrowded, even on a Saturday afternoon, but there were somewhat more people using the trail for the final mile or two, once it went by the wharf and Cannery Row.

Finally, after about 48 miles, I had made it to Monterey. I actually officially ended in Pacific Grove, just after the Monterey Bay Aquarium. While I’ve driven these stretches many times over the years, there was something particularly unique about seeing it by bicycle.

Overall, I’d highly recommend this coastal route – I found it quite amazing. I’d like to eventually do more of the CA coast, but that will take more planning on my part. And for instance, I need to psyche myself up a bit to do the more intense, more narrow portions from Big Sur to San Simeon. =)

For folks living nearby:

For casual riders, the most scenic and most accessible routes are those around both San Francisco and around Monterey. Coincidentally, they also have bike shops renting to tourists, but that’s for good reason – you can see much of the area’s best scenery without pedaling an insane amount. In San Francisco, I’d recommend any of the areas mentioned (around the Bay, the Presidio, Golden Gate Park), but also the perennial touristed route from Pier 39 to Sausalito or Tiburon, and the ferry back. And near Monterey, the 15 miles of trail from Marina to Pacific Grove is a great stretch as well, with a lot of variety. I should also add that there seemed to be some nice coastal trails around both Half Moon Bay and Santa Cruz as well, but the route that I followed mostly seemed to scratch the surface of them.

For those willing to put in more effort, the other sections were great as well. They’re more work physically, but the climbing adds to the scenery. You do need to be aware of traffic, but the shoulders were mostly fine. And I got a lot more out of the biking the route than I ever did driving it. Just make sure you work up appropriately to it, e.g. do a 40-50 mile flat route like the Dumbarton Bridge/237 loop (San Jose->Palo Alto->Fremont->San Jose along the bay) before doing a 40-50 mile hilly route like these.